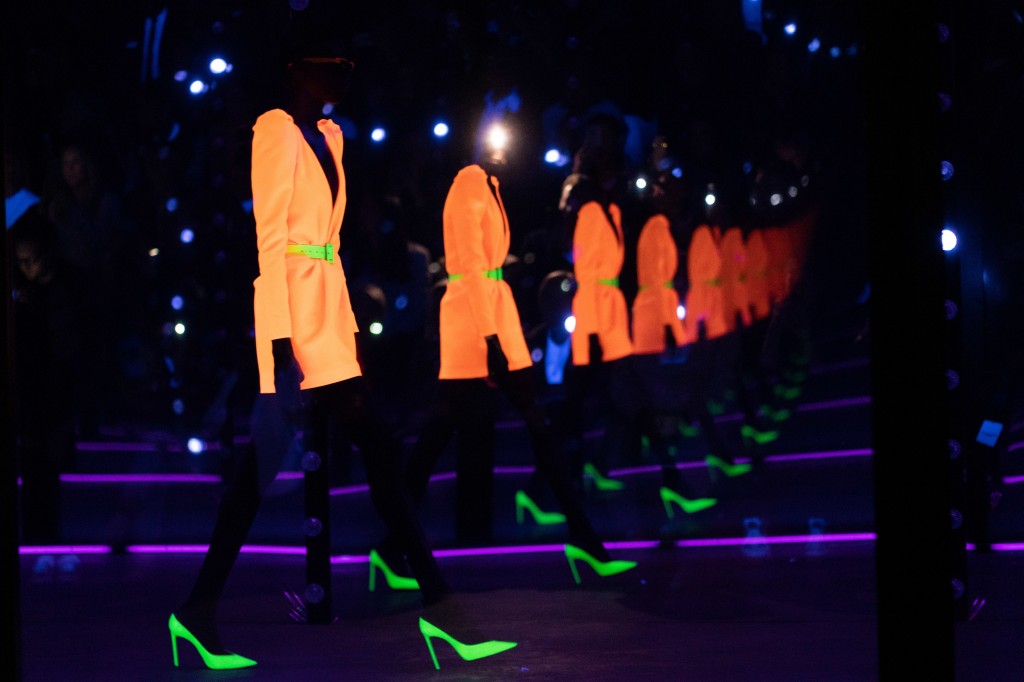 It may be the Year of the Pig, according to the Chinese zodiac, but 2019 is turning out to be all about Female Power! Thanks to feminist movements like #MeToo and #TimesUp, and of course the Woman’s March that started as a worldwide protest against Donald Trump the day after his 2017 inauguration (and that has continued every year since), women are taking center stage around the world and demanding equality in every way. In 2018’s U.S. mid-term election, a record 117 women were elected to office. Finally … it looks like the tide has begun to change for women. 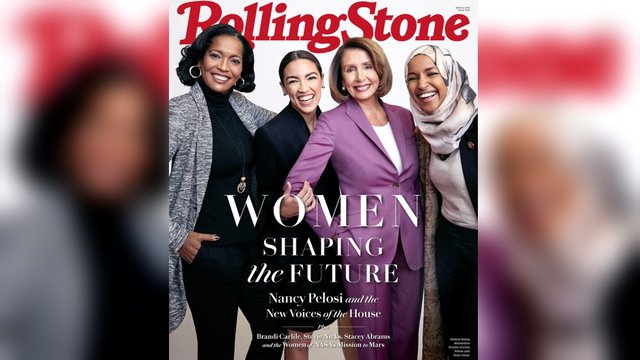 With extraordinary women being elected to powerful positions, designers are stepping up to the plate and creating powerful looks for these new high-profile women. The Fall 2019 collections saw the return of the “Power Suit” (remember your fashion history? Gaultier, Montana and Armani – circa 80s?). And, while the 80s versions consisted of exaggerated shoulder pads, wide belts, slim midi-skirts and bow blouses, all in traditional menswear inspired fabrics and colors, designers are putting a new slant on what a powerful woman in the 21st century should look like. Who could ever forget Melanie Griffith in the 1988 film Working Girl. Every young girl starting her career aspired to be Melanie’s iconic character, Tess McGill. Well, move over Tess, today’s woman is independent, outspoken, confident, diverse, opinionated, political, empowered and socially-conscious. These are the new role models for Millenials, Gen Zers and all those other generations to follow.

Check out Anthony Vaccarello’s collection for Saint Laurent, a 1980s redux, complete with shoulders that extended two whole centimeters beyond the natural shoulder and updated the looks by introducing a neon color palette. 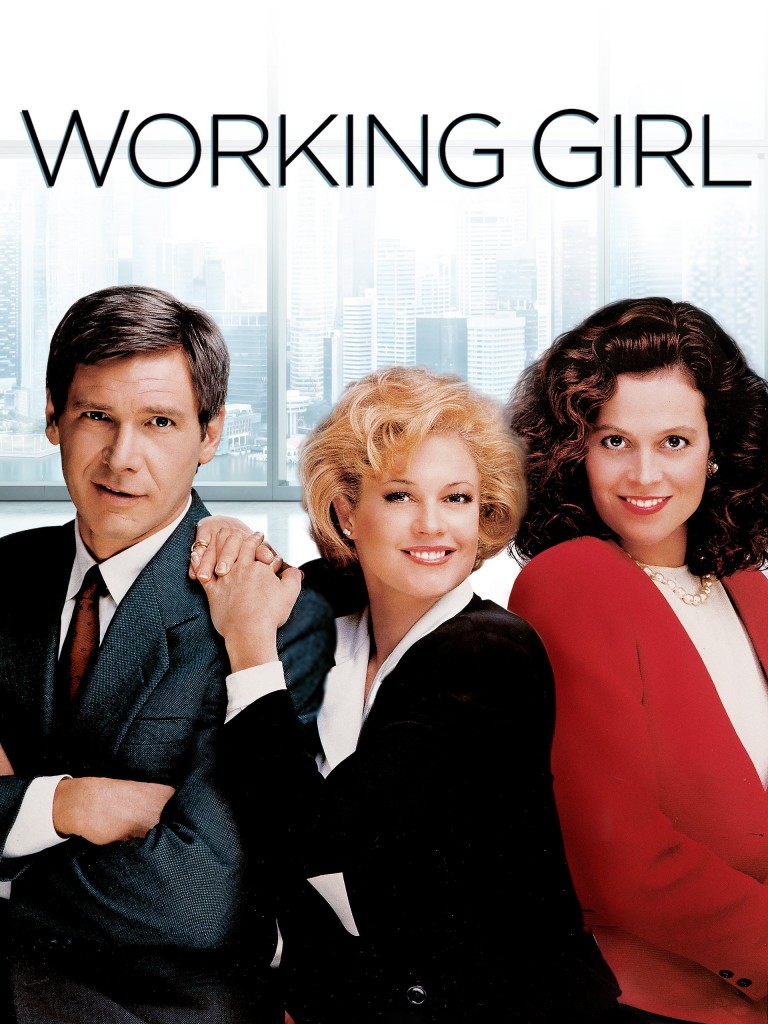 And alas! Thirty years later, the power suit is back, but this time around, the suit is soft and feminine.  According to an interview by Olivia Stren, for FashionMagazine.com (September 17, 2018), designer Joseph Altuzarra stated, “I think that the suit, for a long time, was trying to emulate a menswear staple when women were wearing it to work. It was about hiding your femininity. With so many strong women today embracing a more tailored, feminine pantsuit silhouette, I think it has emerged as a symbol of female empowerment and strength. In our case, the tailoring is always about celebrating femininity and a woman’s strength.” Altuzarra  claims that tailored ‘workwear’ is at the heart of his brand and credits his mother, who clocked in at a bank every morning, as his inspiration.

With “women power” in the air, it was no surprise that power dressing and chic workwear were key trends on the Milan and Paris Fall 2019 runway. While many of the designers who embraced this trend were women, there were a few ‘woke’ men that embraced the movement as well. Namely…Karl Lagerfeld. Although Milan kicked off with the tragic news that Karl Lagerfeld has passed away on February 19th, his legacy lived on in his last collection for Fendi. And you just got the sense that, as always, Karl got the memo – Women Rule. 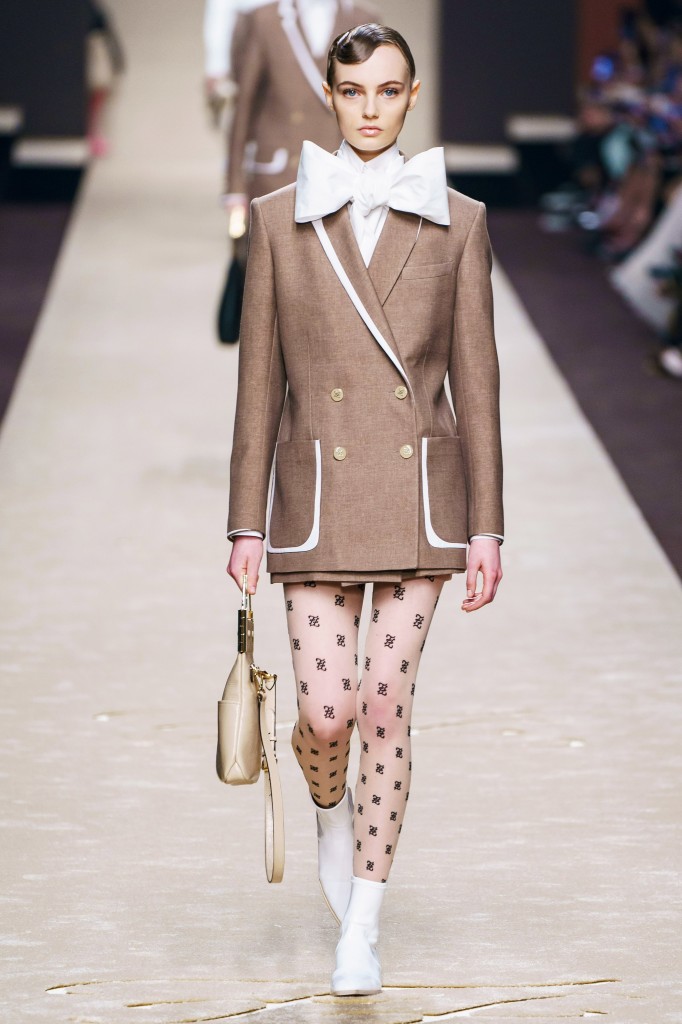 “He used to call me ‘la petite fille triste,” remembered Silvia Venturini Fendi, in an emotional backstage scene at the elegiac Fendi show, the last designed by the late Karl Lagerfeld, whom she first met when she was four years old. “Now is not the time to be sad,” she added, noting that Lagerfeld supervised every look in the focused collection that revealed what she called “those facets of him—the signatures that he had embedded into the brand’s DNA since he first met the quintet of Fendi sisters, including Venturini Fendi’s mother, Anna, in Rome in 1965.” Silvia Fendi stated to Vogue.com.

The collection included plenty of sharp tailoring paired with crisp shirts that added a refined, yet flirty, twist to office dressing. 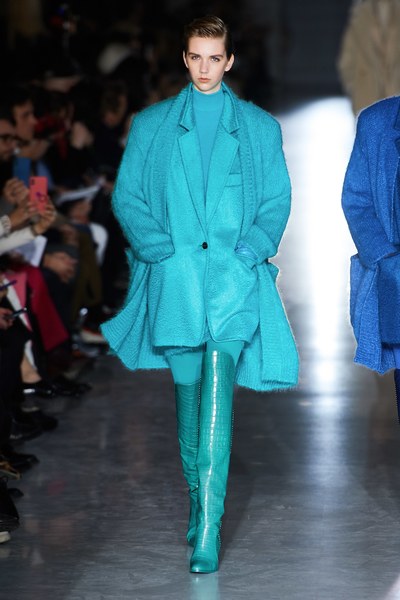 Who could forget Nancy Pelosi in her Max Mara coat on her way to meet with Donald Trump in December regarding border wall funding – this moment was the inspiration behind creative director Ian Griffiths Fall 2019 Max Mara collection. Ms. Pelosi was front and center on Griffiths’s Fall mood board as he made a strong connection between power and glamour. Griffith played with sharp tailoring, in head to toe monochromatic colors that ranged from soft camel to bold blues. 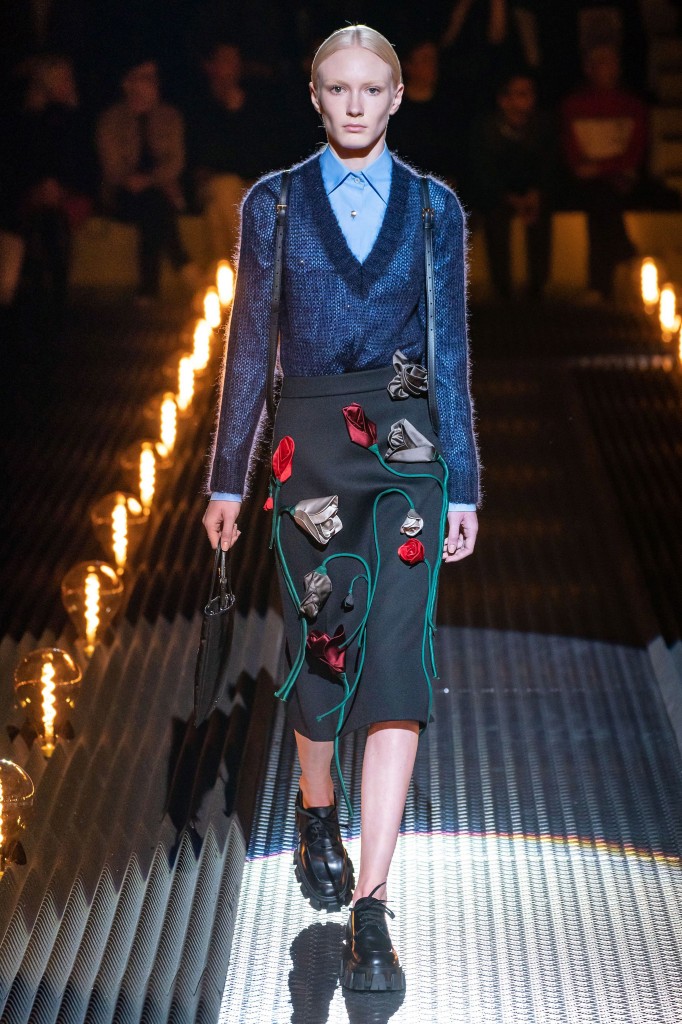 As one of the most politically-articulate designers in the fashion industry, having once been a member of the Italian Communist Party and an ardent feminist, the fear of war and the political turmoil worldwide has been a constant worry on Miuccia Prada’s mind. So, for her Fall collection, the designer was inspired by “romance and fear,” in of all things…a nod to the Bride of Frankenstein. For her romantic girls, Prada showed plenty of delicate lace capes, 3-D floral skirts and glittery red shoes, but these feminine gestures stomped their way into an army of utilitarianism looks that ranged from uniform military jackets to combat boots. The collection embraced the Prada woman; she’s smart, worldly, and understands the turmoil around her, yet she still really loves fashion. 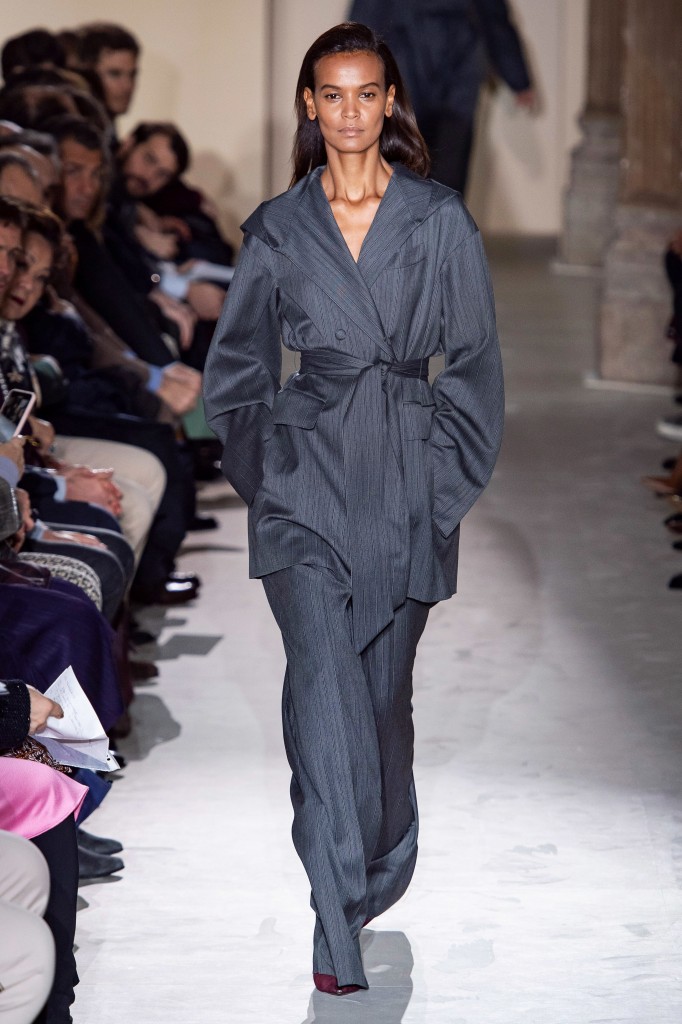 Just days before the show, Salvatore Ferragamo announced Paul Andrew’s promotion to creative director, overseeing all design operations for the company. For Andrew, it all starts with ‘the shoe.’ Case in point, a Ferragamo multicolored patchwork shoe that was created in 1942, which provided the collection’s color palette and patchwork prints. Andrew also showed a more refined side with a chic belted pantsuit and lots of tailored outerwear. 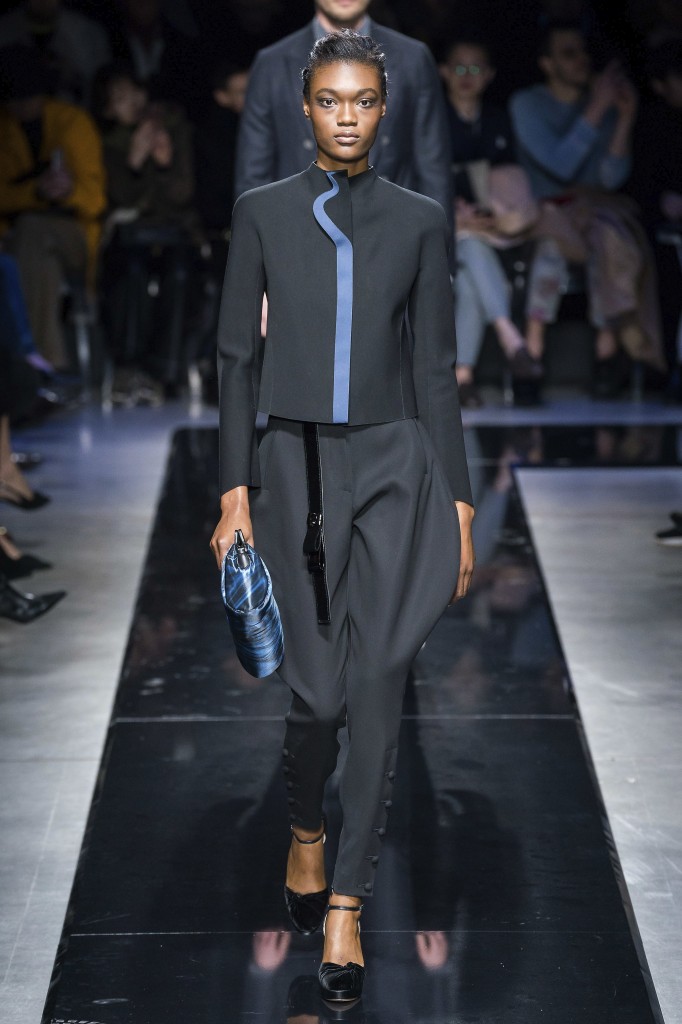 No one, and I mean no one, does tailoring better than Giorgio Armani. And for his Fall 2019 unisex show, the designer titled his collection “Rhapsody in Blue.” Although the collection was overwhelming dark (a sign of the times?), there were plenty of interesting details. Armani showed jodhpur pants paired with tailored jackets for day, while for evening he created a beaded floral shrunken jacket that was paired with velvet trousers for a relaxed take on eveningwear, as only Armani knows how. 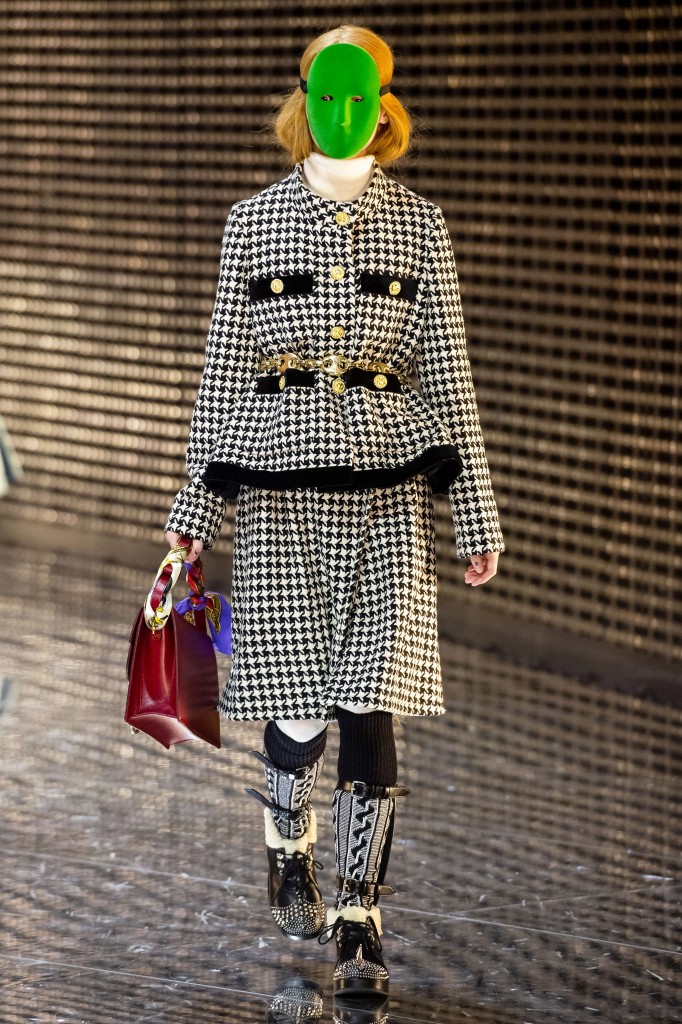 Okay, so you see the image of this houndstooth suit and you say, gotta be Chanel right? Well…wrong! It’s Alessandro Michele. Known for his eclectic, magpie collections for Gucci that often blast gender norms and historical mash-ups, for Fall 2019 he delivered a powerful collection filled with the treasured pieces you would find in your grandmother’s closet. With a nod to the 40s, Michele created tailored jackets that were cut to perfection for both men and women, as well as wide leg cropped trousers, Pierrot collar shirts and anything but basic outerwear. While this may have been a tamer Gucci collection, Michele infused plenty of eccentric touches – such as the fetish masks and metal ear coverings. 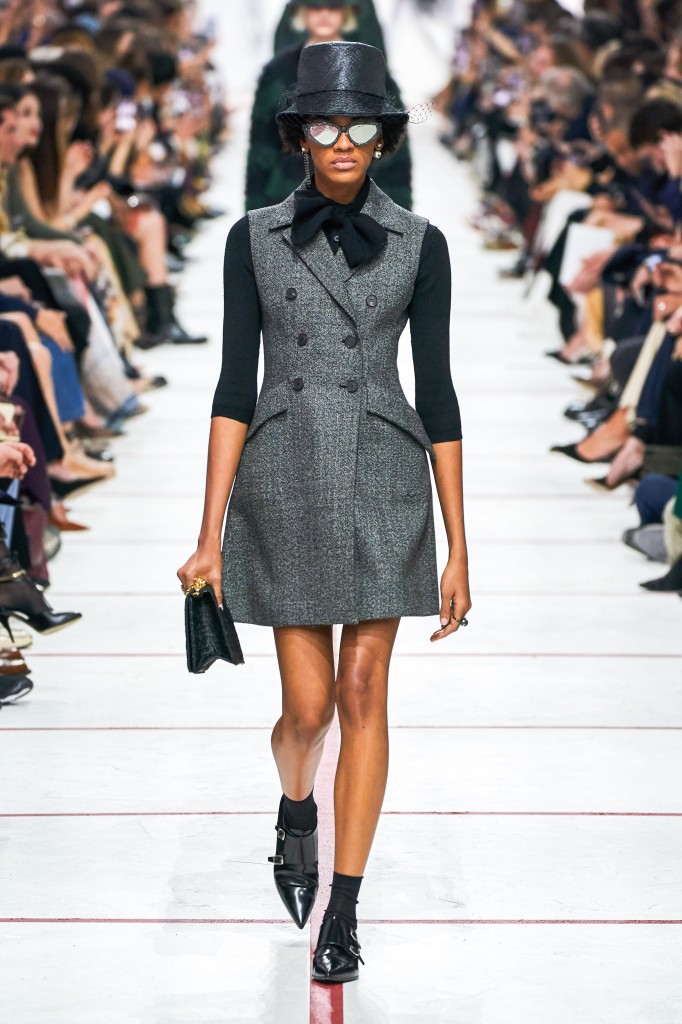 Among the designers that have truly taken their causes to the runway is Maria Grazia Chiuri, the creative director for Christian Dior. Season after season Chiuri takes a stand on women’s rights and equality. For Fall 2019, Chiuri channeled Italian conceptual artist Bianca Menna, who in the 1970s signed her work pseudonymously as Tomaso Binga, a man, to cunningly protest male privilege in the art world. The artist read a poem about the promise of a feminist victory at Chiuri’s show. As for the clothes, Chiuri was inspired by England’s “Teddy Girls” – 1950s working class girls who had a love of Rock & Roll and clubbing – as well as Dior’s  optimistic creations of the same time period. The collection was sportswear at its best! Chiuri layered rompers, skirts, coats, trousers and bustiers in a modern and fresh way. 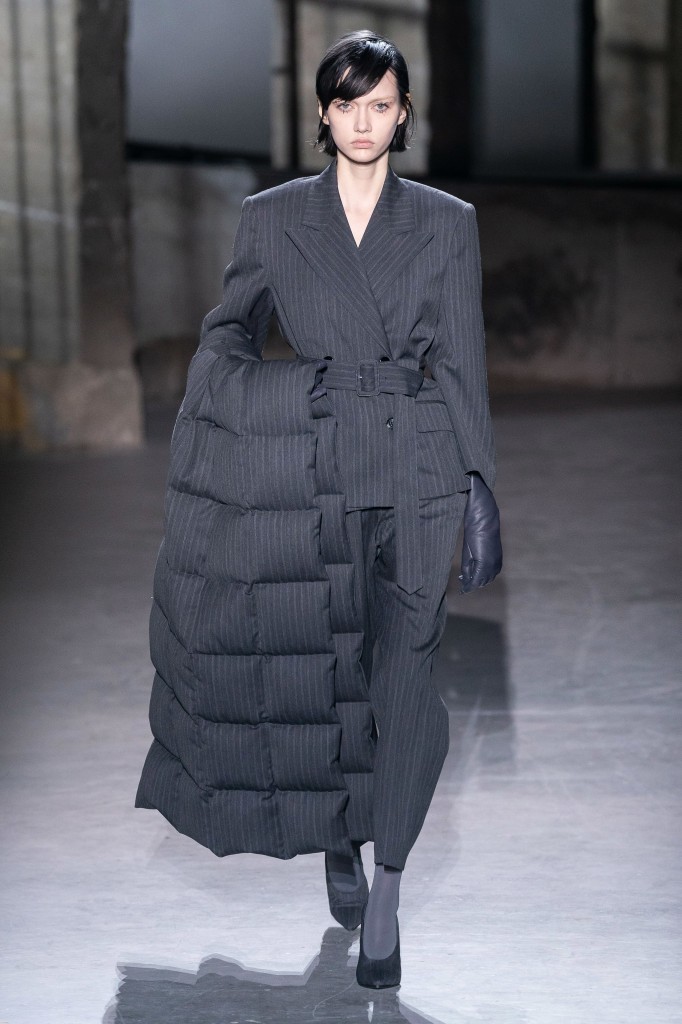 Dries Van Noten is known for his bold prints and unapologetic use of color, but let’s face it, today’s state of the world is a bit darker so Van Noten turned out a hauntingly beautiful show. While his signature floral prints are traditionally romantic and vibrant, this Fall the floral motif took a somber turn. In an interview with Vogue, Van Noten stated “We picked them from my garden last October and photographed them. I wanted roses but not sweet roses—roses with an edge, roses for now. Flowers can be romantic, but this I wanted to take out, because the times are tougher than in the past. So you see the diseases, the black spot, the imperfections.”

Van Noten opened the show with a lineup of polished gray pantsuits, perfect looks for the office (political or business), case in point, a pinstripe belted pantsuit with a matching puffer stole. How incredibly chic! Can you just imagine Justice Ruth Bader Ginsburg in this?

Chloé paid a touching tribute to Karl Lagerfeld, the late designer who designed for the house  from 1963 – 1983. When the fashion crowd arrived, they found placed on their seats postcards that featured images of Lagerfeld’s past collections, as well as his own comments about his work. One particular quote from 1975 still resonates today, “The essence of modern dressing—unstructured, weightless, [and] totally feminine.”

Fast forward, forty years later, and this is still the Chloé aesthetic; upscale bohemian in the chicest and most sophisticated way. For her Fall 2019 collection, Natacha Ramsay-Levi found her stride at the house. There were an abundance of breezy but polished dresses that every “It Girl” will crave. Ramsay-Levi paired these effortless frocks with mid-heel boots to complete the effortlessly cool look.

Sure Ramsay-Levi nailed the boho look, but she also showcased her talents as a great tailor with Prince of Wales trousers and skirts, military-inspired trousers and plenty of outerwear,  cut to perfection. 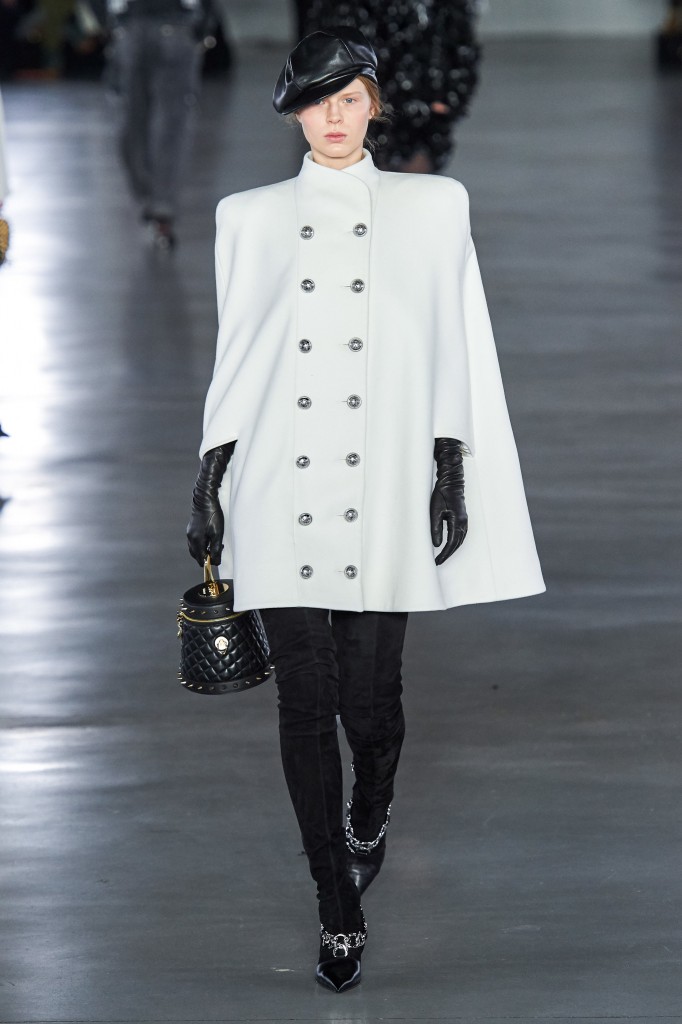 Meanwhile at Balmain, Olivier Rousteing went full-out 80s biker chic. Big shoulders, biker chains, black leather moto jackets and power suiting on steroids was his vision of the modern woman. But, not so sure about whether this through-back look will help women in today’s day and age like it did in the 80s. What would Nancy Pelosi or RBG say?

So tell us, where do you stand on power-dressing in the 21st century?