In August of 2021, the UoF blogged about Y2K fashion making a major comeback, and almost nine months later the trend is still going strong. The breakout Y2K trend is no doubt the micro mini skirt, according to online search engine retailer Lyst. Demand for mini skirts is at a three-year high, with over 900 searches a day for the now-infamous, Miu Miu-sanctioned bottom (reported on March 7, 2022, in Vogue Business).

Miu Miu’s ultra-short, low-rise, pleated skirt has taken the fashion world by storm — with celebrities ranging from Nicole Kidman to Zendaya, all sporting it on their social media pages and magazine covers. The hottest item of the season has barely enough fabric peaking out from under its belted waistband; for those of us who were teens or young adults in the early aughts, the itty-bitty skirt reminds us of Britney Spears’ iconic, sexy schoolgirl outfit in her 1998 Baby One More Time music video. While the micro mini is not a trend for everyone, some have even called the look trashy, nevertheless, demand for the mini is skyrocketing. The Miu Miu skirt is so popular it even has its own Instagram account, @miumiuset. Miu Miu has been sold out of the coveted item for weeks and has a long list of fashionistas eager to get their hands on the coveted skirt, despite its hefty price tag. Are you ready? Are you sitting down? The skimpiest version of the khaki miniskirt costs $950, with a slightly longer version available for $1,150. Those of us who can calculate garment fabric consumption, that’s about a quarter of a yard or 9 inches worth of fabric!!

Miuccia Prada presented the infamous micro-mini skirt during Miu Miu’s spring 2022 fashion show last October. It was an immediate hit as the skirt was seen on nearly every red carpet. After so much buzz and success of the barely-there skirt, the designer revamped the bold style for her fall 2022 Prada collection.  And of course, plenty of designers followed in her footsteps, creating their own versions, like Balmain and Valentino. Now that we know the leggy silhouette will continue to reign supreme for fall, let’s dig into the history of the controversial piece.

HISTORY OF THE MINI 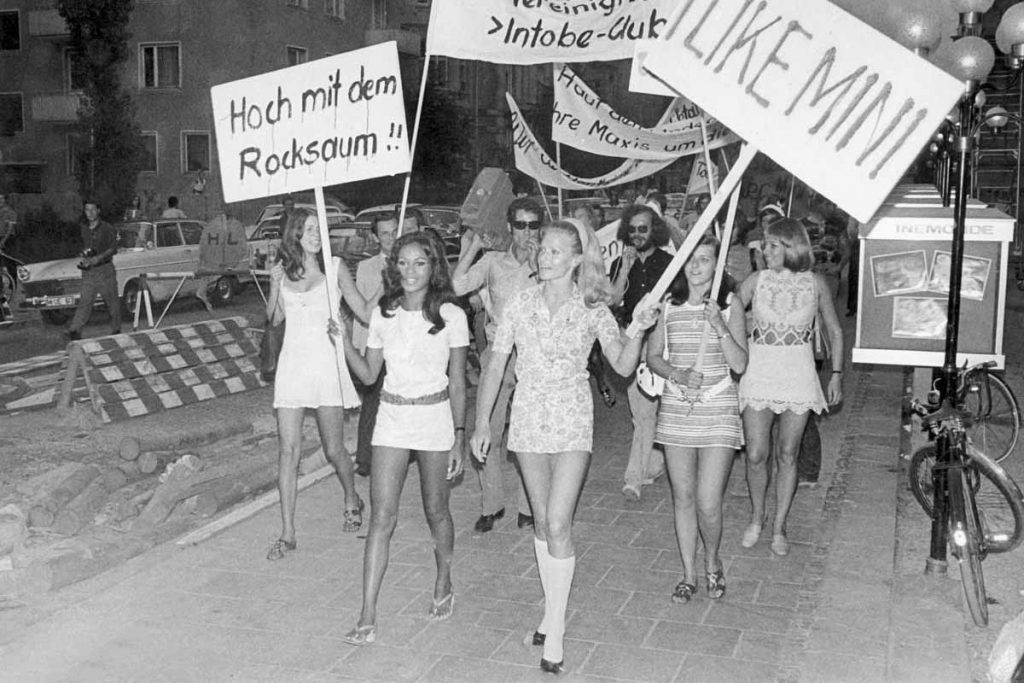 The Mini has always been on of society’s most controversial fashion items. (Photo Credit: Pinterest)

It is common knowledge that the mini skirt craze began in the sixties as an empowering fashion choice during the birth of the woman’s liberation movement. But hold on, let’s discuss.

British-designer Mary Quant has often been credited for ‘inventing’ the miniskirt, that started the mod fashion movement. In a 2014 interview with the New York Daily News, Quant stated: “A miniskirt was a way of rebelling.” The Quant definition of a mini required the bottom edge of the skirt to hit roughly halfway up the thigh and fall no more than four inches below the butt. In today’s terms, a ‘modest mini’. But perhaps the real truth about the birth of the ‘mini’ should be traced back to the 1950s when ‘above the knee’ skirts appeared in couture alongside rock & roll and the youth dance craze. In reality, the most era-defining look of the 1960s, the mini, was a gradual process. According to England’s Victor & Albert Museum, (which held an exhibit on Mary Quant’s fashion movement from April 6, 2019 – Feb. 16, 2020) very early signs of the mini were detected in late-1950s couture. Case in point, Balenciaga’s ‘sack’ dress, which introduced a simple, semi-fitted shape that took the emphasis away from the wearer’s waist and Yves Saint Laurent’s 1959 ‘trapeze’ line for Dior, that promised to show more leg, or even some knee. Paris couturier André Courrèges achieved international publicity for a couture collection featuring short skirts and space-age dresses in April 1964.

Contemporary photographs and surviving dresses show that it wasn’t until 1966 that skirts became really short. Quant herself has acknowledged how the trend for rising hemlines was influenced by an emerging London street-style, and a wider cultural shift towards informality and the break-down of social codes. Away from the rarified world of Parisian couture houses however, it took a young women like Quant and schoolgirls on the streets, who were improvising short skirts. Quant was an early ambassador of the ‘above the knee’ look, rocking a knee-skimming skirt during a visit to New York as early as 1960. As a designer she enjoyed adapting minimal styles that disrupted traditional social and gender roles – short hemlines suited her simple shift dresses. With a growing presence in the media, Quant played a significant role in the adoption of the miniskirt by contemporary women in England, Europe, and the USA. 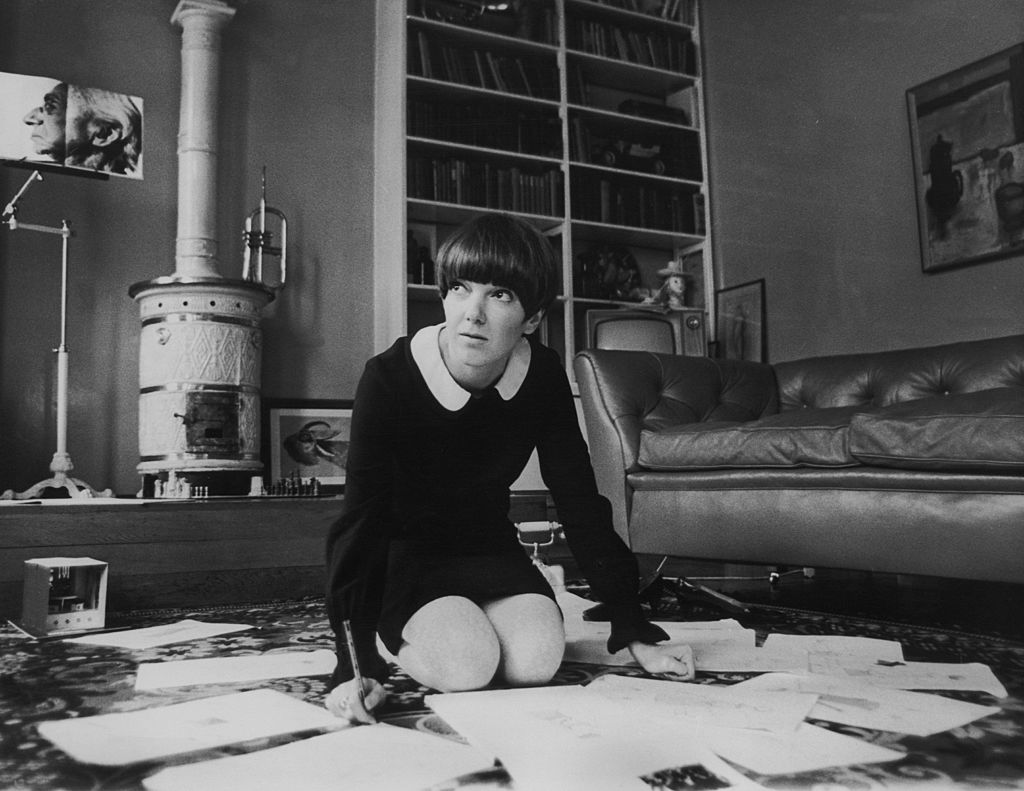 In 1965 the term ‘miniskirt’ was used to reference above-the-knee hemlines by newspapers and magazines (Quant named her iconic skirt the mini after her favorite car). In 1966, Quant’s contribution to fashion was recognized by the Queen, with an OBE (Order of the British Empire) medal. Quant was photographed at Buckingham Palace wearing one of her own trademark jersey minidresses, which promoted her distinctive look around the world. In the mid-sixties, supermodel Twiggy became the unofficial poster child for the miniskirt look. In 1965, model Jean Shrimpton caused a stir when she wore a miniskirt with no stockings, hat, or gloves to the Melbourne Cup Carnival in Australia. That year the mini also got a boost when Yves Saint Laurent debuted his famous and very short ‘Mondrian’ dresses.

Paco Rabanne introduced his iconic, plastic, chainmail miniskirt in 1966, followed by the throw-away minidress. The mini was officially a high fashion statement. 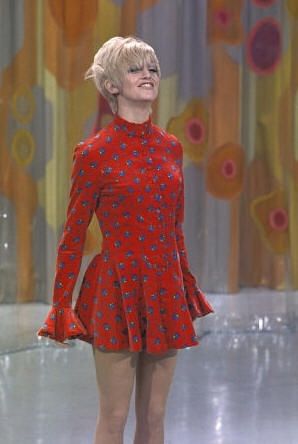 Goldie Hawn on Laugh In in the Sixties. (Photo Credit: Pinterest)

By the mid to late sixties the television show “Laugh In” debuted American actress Goldie Hawn in her mini, inspiring American girls to copy the actress’s signature mod style. By 1968, former First-Lady Jackie Kennedy cemented the trend with her Valentino short white pleated Valentino dress when she married Aristotle Onassis. 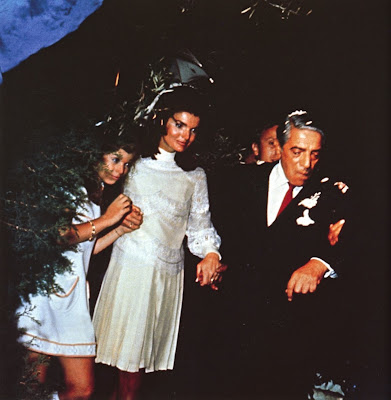 When the Vietnam War began and political tensions began to rise, mini skirts fell out of fashion and the maxi skirt was the sartorial choice among young women.

Mini-skirts became fashionable again in the mid-seventies when singers like Blondie regularly wore mini skirts on stage. The mini also became a staple for the Punk crowd as it was reinvented in black leather and PVC.

By the early eighties, the mini-skirt was once again reinvented and became known as the rah-rah (or ra-ra) skirt, originating from cheerleading uniforms. The Oxford Dictionary noted this as the first successful miniskirt revival. And in 1982, the rah-rah skirt even appeared on the cover of Time magazine. In 1984, Madonna performed at the MTV Video Music Awards, wowing the crowd in a white tulle minidress resembling a wedding dress as she sang “Like A Virgin”. In the early nineties miniskirts were all the rage with icons like Naomi Campbell, Kate Moss and the Spice Girls keeping the powerful item, hip, trendy and in the public sphere. Once again, the controversial sartorial choice suggested both empowerment & vulnerability, liberation & exploitation, and shifted the dynamics, allowing women to take charge of their own sexualities.

In the early aughts, miniskirts made a major comeback thanks to fashion icon Paris Hilton, who raised her hemline even further to “macro mini” length. And let’s not forget Tom Ford, who proclaimed the ‘mini-est’ of micro skirts to be the ‘it’ item of his spring/summer 2003 collection. Fast-forward to 2022. After living through a global pandemic and social and political unrest around the world, designers are raising hemlines once again to micro-mini status. And just as the miniskirt was provocative back in the ’50s & ’60s when the trend made its way into the wardrobes of fashionable girls everywhere, the micro-mini today offers the same kind of sartorial edge. Although today’s micro version may be harder to pull off, there’s no denying that it is becoming one of the most popular trends of the moment. As the saying goes, “what comes around goes around”. So tell us, who do you think invented the mini?