University of Fashion’s mission, from day one, has always been, ‘to preserve the art and craft of fashion design.’ In fact, since the company’s founding in 2008 our tagline has never changed, “Master Design One Step at a Time.”  Sure, we’ve added computer-generated fashion art and computerized pattern making lessons over the years, but at our core, we’re all about promoting a strong foundation, both ‘on-the-table’ pattern making and in ‘hand-drawn art’ before we recommend moving to anything computer-generated.

In this blogpost, we’d like to celebrate fashion illustration and its continued contribution to the world of fashion. We are extremely proud to share that our founder, Francesca Sterlacci, who owned and operated her eponymous brand in the 1980s, was lucky enough to have her work illustrated by THE most prolific WWD illustrators in what is now known as the ‘Golden Age of Fashion Illustration’ (1960s to the early 1990s).

As you admire the work of these illustrators, we’d like you to pay particular attention to the individual illustrative style of each and join us in celebrating their individual and unique talents.

You can only imagine how over-the-moon excited we were when Women’s Wear Daily recently dedicated a week to the most prolific fashion illustrators who brought fashion to life on their pages before they replaced illustration with photography in the early 1990s. Although WWD incorporated fashion illustration from its inception in 1910, it was the 60s thru the early 90s that best describes the paper’s Golden Era of Illustration. WWD provided a showcase for some of the best illustrators in the fashion business and this blogpost is dedicated to those wonderful artists. Included in this group: Kenneth Paul Block, Antonio Lopez, Joe Eula, Richard Rosenfeld, Steven Stipelman, Robert Melendez, Robert Passantino, Glenn Tunstull, Kichisaburro Ogawa, Charles Boone, Steven Meisel and Catherine Clayton Purnell. 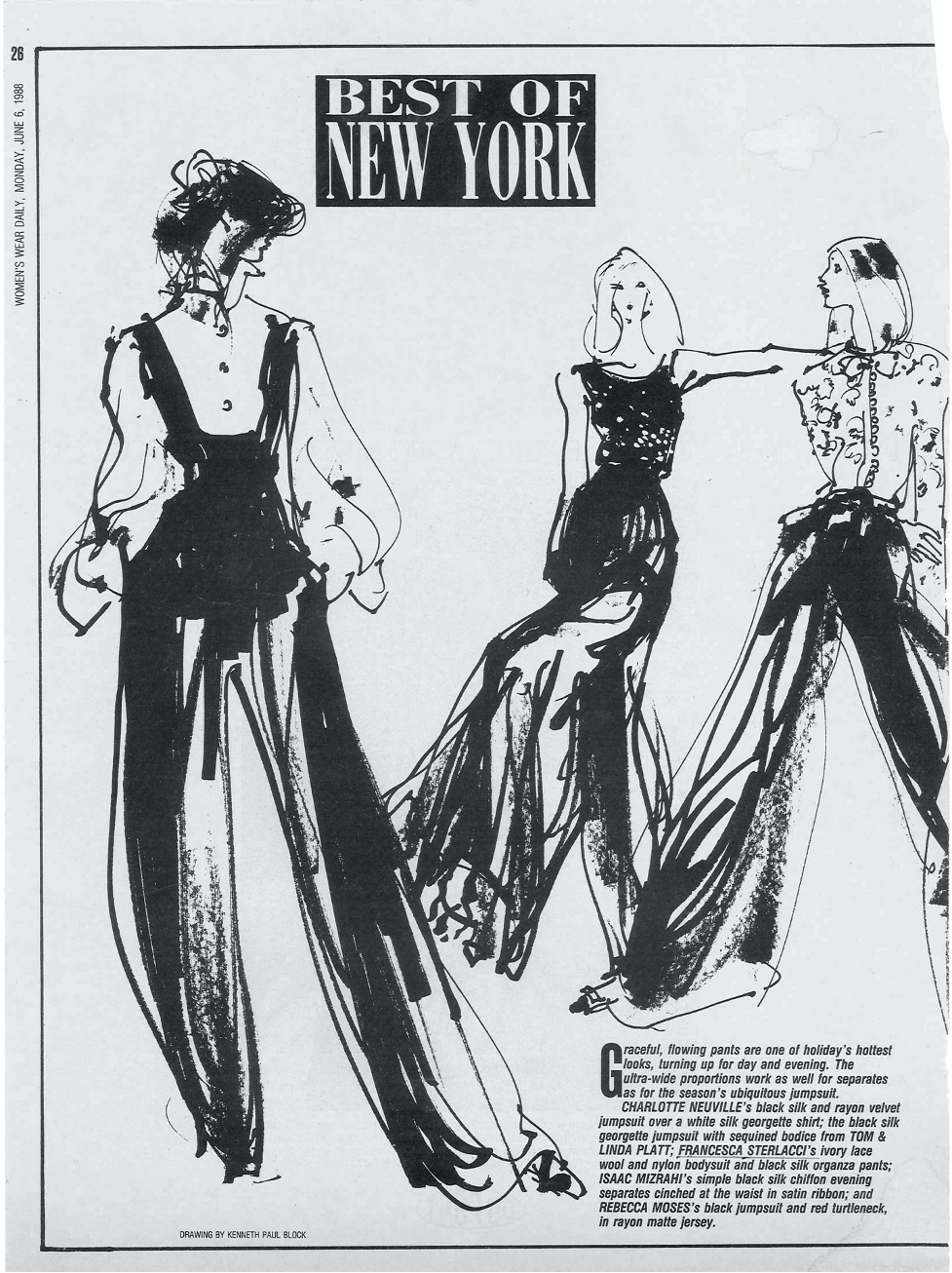 As a designer in the 1980s, having your designs chosen for WWD’s Best of New York issue was always a big deal, no matter how many times you were lucky enough to be included. And, if your work was illustrated by Kenneth Paul Block, well, that was an even bigger deal!

By far, Kenneth Paul Block (1925-2009) was the undisputed star of WWD’s roster of fashion illustrators. From all accounts, he was in a league of his own. Joining the paper in the 50s, Block’s legacy lasted into the early 90s when the illustration department at WWD was unceremoniously disbanded to make way for photography. Block’s style was uncomplicated, modern and fresh. A master of the graceful gesture, his style was a complete departure from the rigid illustrative style popularized in the 1940s. 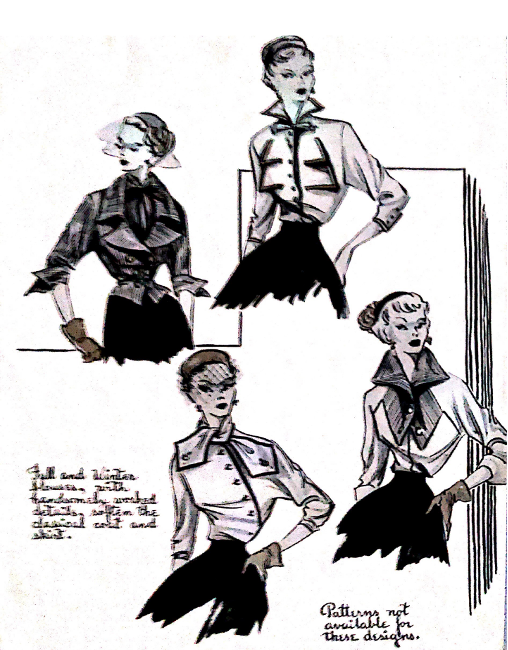 According to WWD, Block was “known for his well turned-out, gentlemanly style, with his Dorian Gray-like youthfulness, Block dressed impeccably, favoring an ascot, fresh-pressed shirt, pinpoint perfect jackets and cigarette holders for his workdays at the easel. The artist, who died at age 84 in 2009, spent nearly four decades working at Women’s Wear Daily.”

Towards the end of his life, Block was very concerned that his body of work

be kept together and therefore gave approximately 1,700 drawings to the Museum of Fine Arts in Boston. His work is also a part of the Frances Neady collection at the Fashion Institute of Technology which contains over 300 illustrations by the most prominent 20th-century illustrators. The Frances Neady collection is named for an inspiring and dedicated teacher of fashion illustration, who served on the faculties of FIT and Parsons for 40 years.

Upon his death, the Kenneth Paul Block Foundation was established and is devoted to collecting, preserving, exhibiting and interpreting the wealth of Kenneth Paul Block’s art, in order to highlight his contributions to the art form. 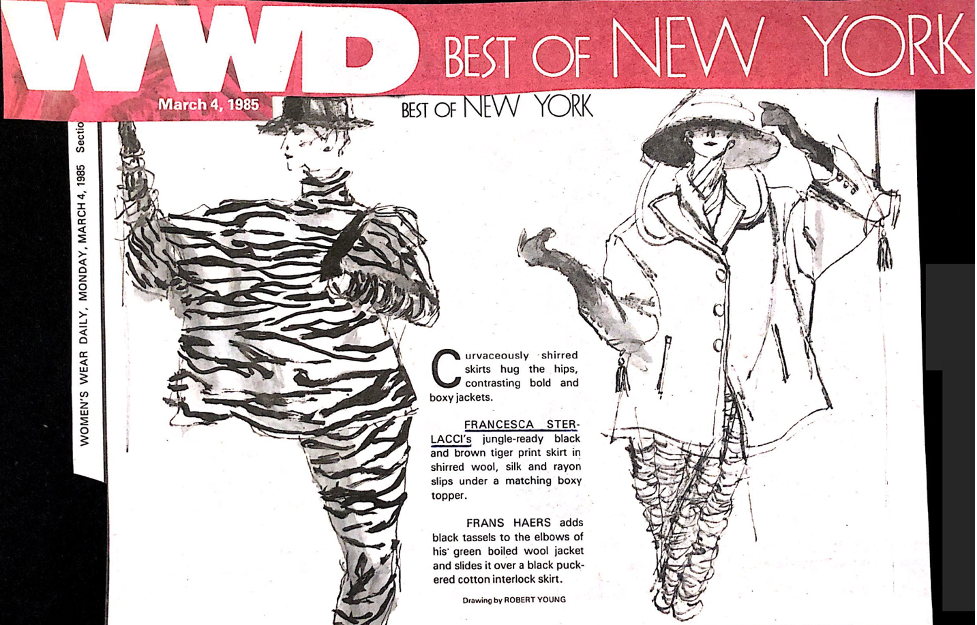 Another favorite among New York designers was Robert Young. His style always brought out the best in your design. Today, Robert Young is an Assistant Professor of Illustration at Pennsylvania College of Art & Design in Lancaster, Pennsylvania. As is the case with most artists, Robert Young’s style and breadth of work has expanded with the times.

Be sure to check out his “Hello, Young Illustrators” portfolio series. https://www.youtube.com/watch?v=KGDfewj-V6Q which is especially helpful during the pandemic. 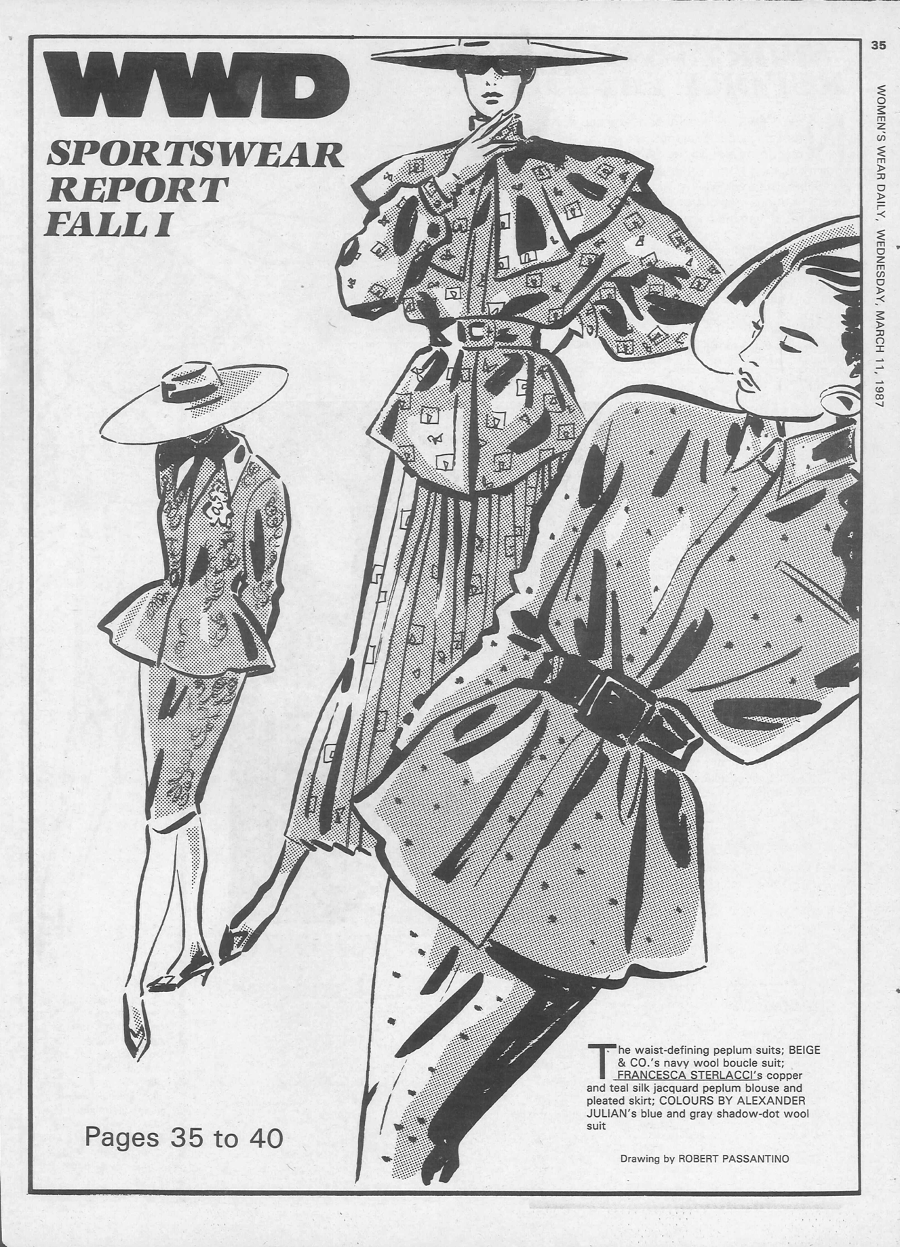 As a fashion illustrator, Robert Passantino knew the value of actually learning the basics of clothing design and construction and how that would benefit his career when he started his career at Pratt Institute. He would later take illustration classes under Steven Stipelman at the Fashion Institute of Technology, who later would recommend him for a position at WWD in 1969.

In the recent article, Passantino told WWD “I developed my style on the job. It was a fashion art boot camp. As an artist, the more you work on your art, the better you become.” 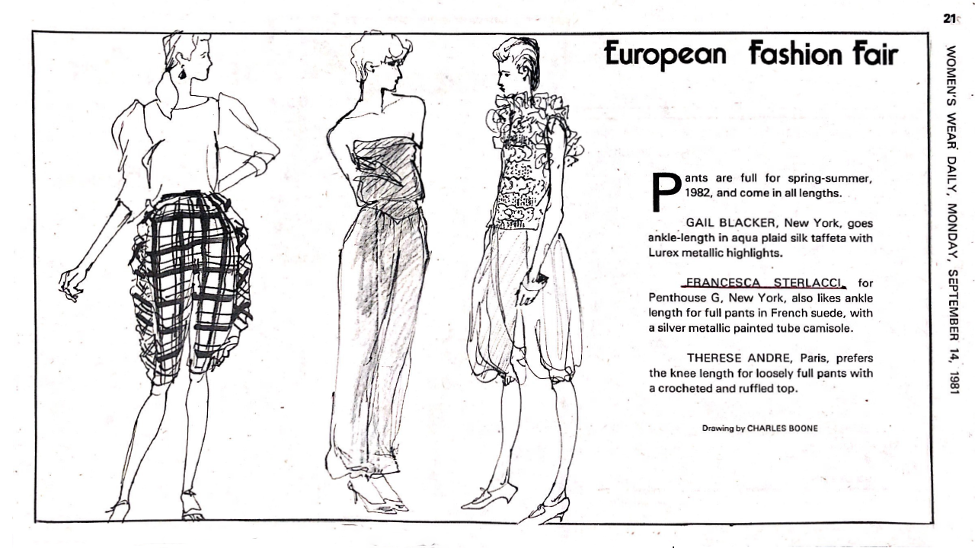 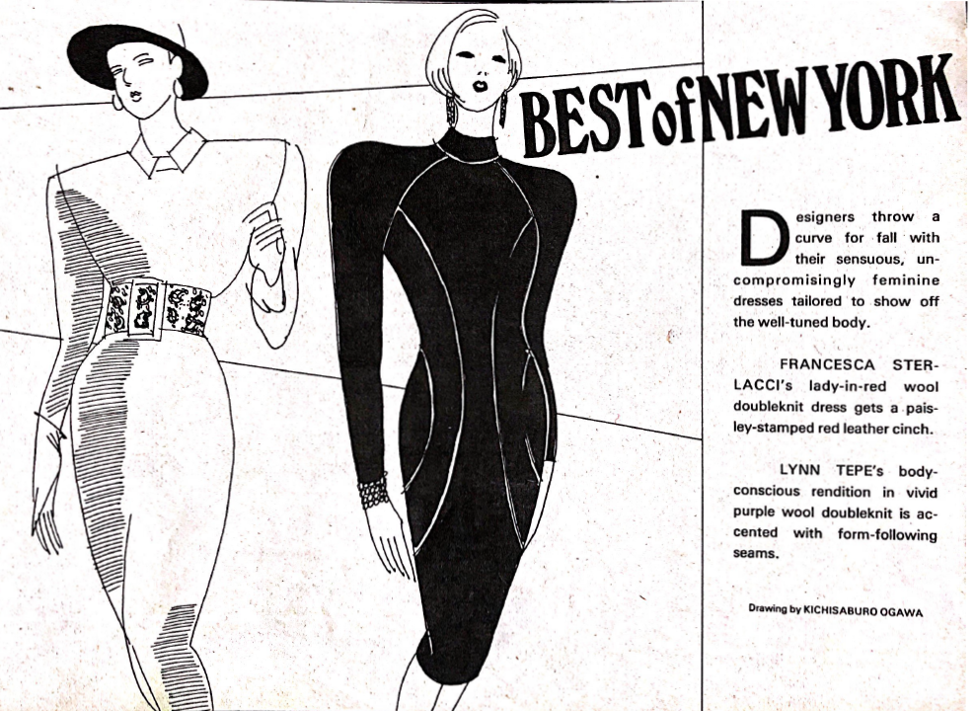 Three days after graduating from FIT, Kichisaburo Ogawa went to work for WWD where he would spend the next 31 years illustrating fashion both at the paper and for numerous international magazines. In discussing what it was like to be an illustrator at WWD in those days Ogawa said, “Depending on the assignment, work was either due by the 2 p.m. deadline or the 6 p.m. deadline. After the daily editorial meeting, an editor would provide a designer’s sketch to draw from and the work would be due that same day. On some occasions the illustrator would be given a few extra days contingent on the article or the subject matter. A cosmetics cover, for example, was used for supplements, which allowed for more leeway with a longer deadline. Most of the time we had to finish within a few hours.” He also claimed that “You had to create your individual style. Otherwise, they would think, ‘Why are you doing the same type of illustration? You don’t need to work here.”

Later in his career Ogawa connected with another WWD fashion illustrator, Richard Rosenfeld, who was his office mate when they both taught at FIT. Today, Ogawa is an assistant professor at Parsons. 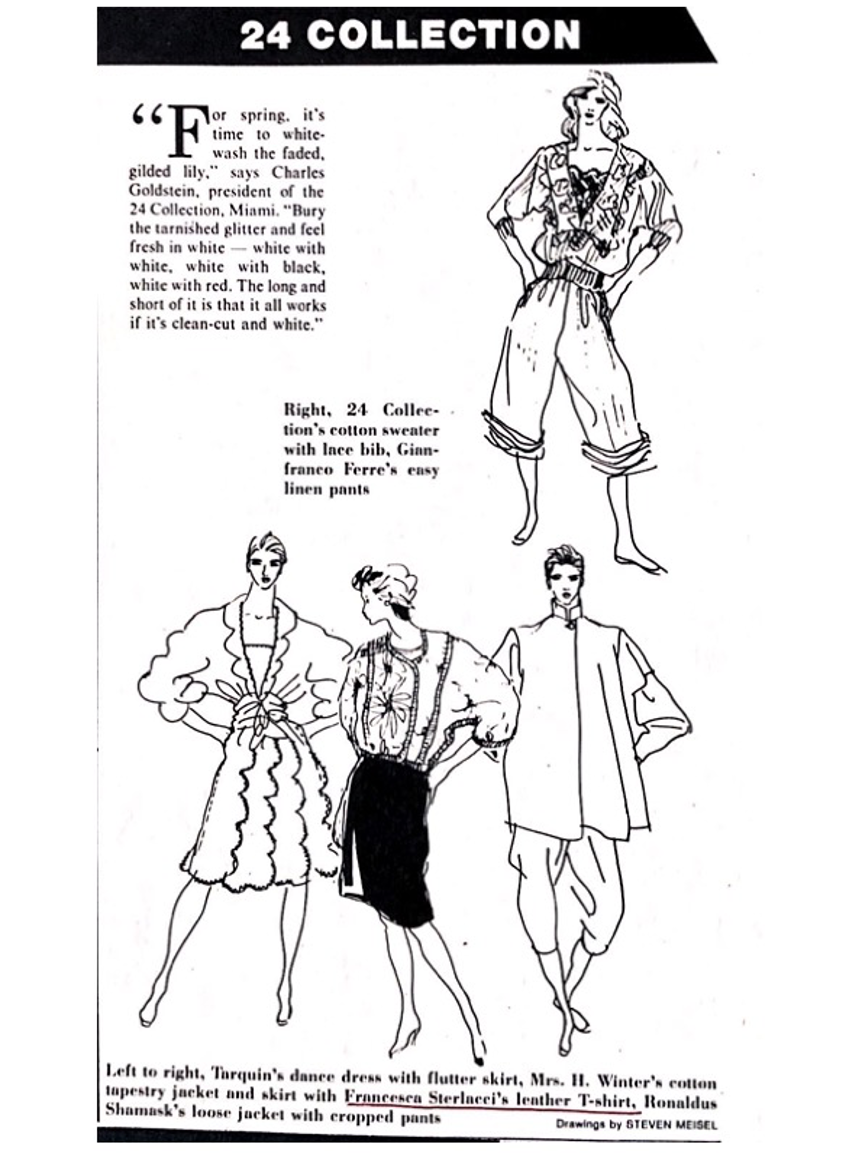 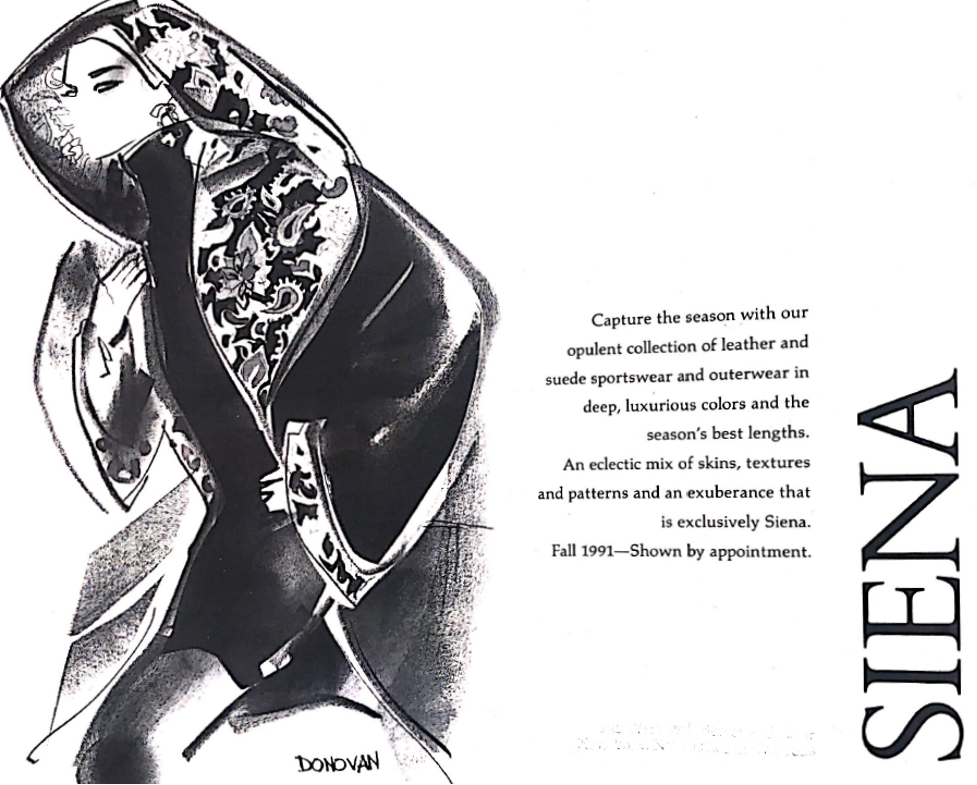 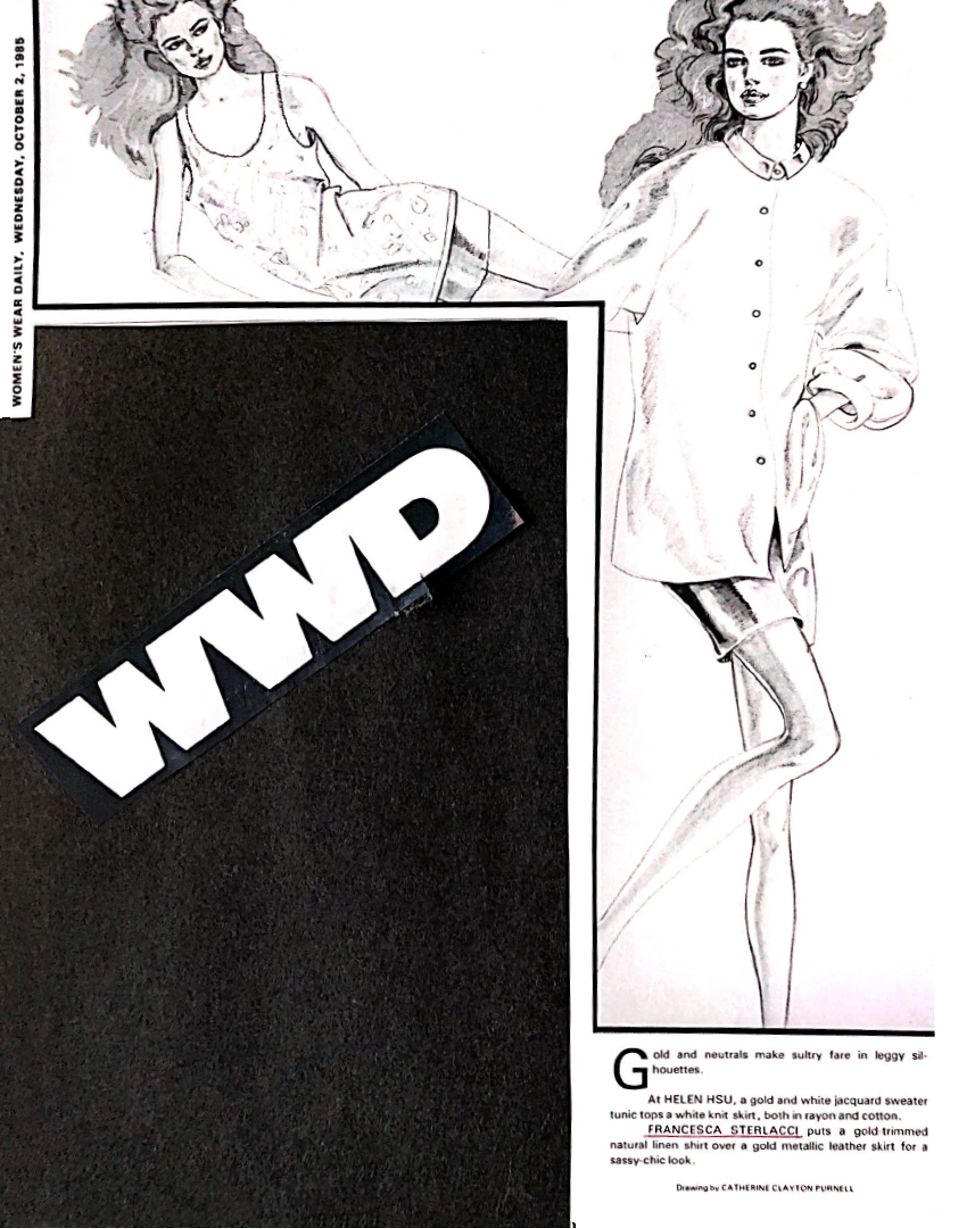 One of only a handful of females in a sea of male fashion illustrators at WWD, Purnell was most known for her colorful fantasy-filled intimate, children’s and swimwear illustrations in the 80s. 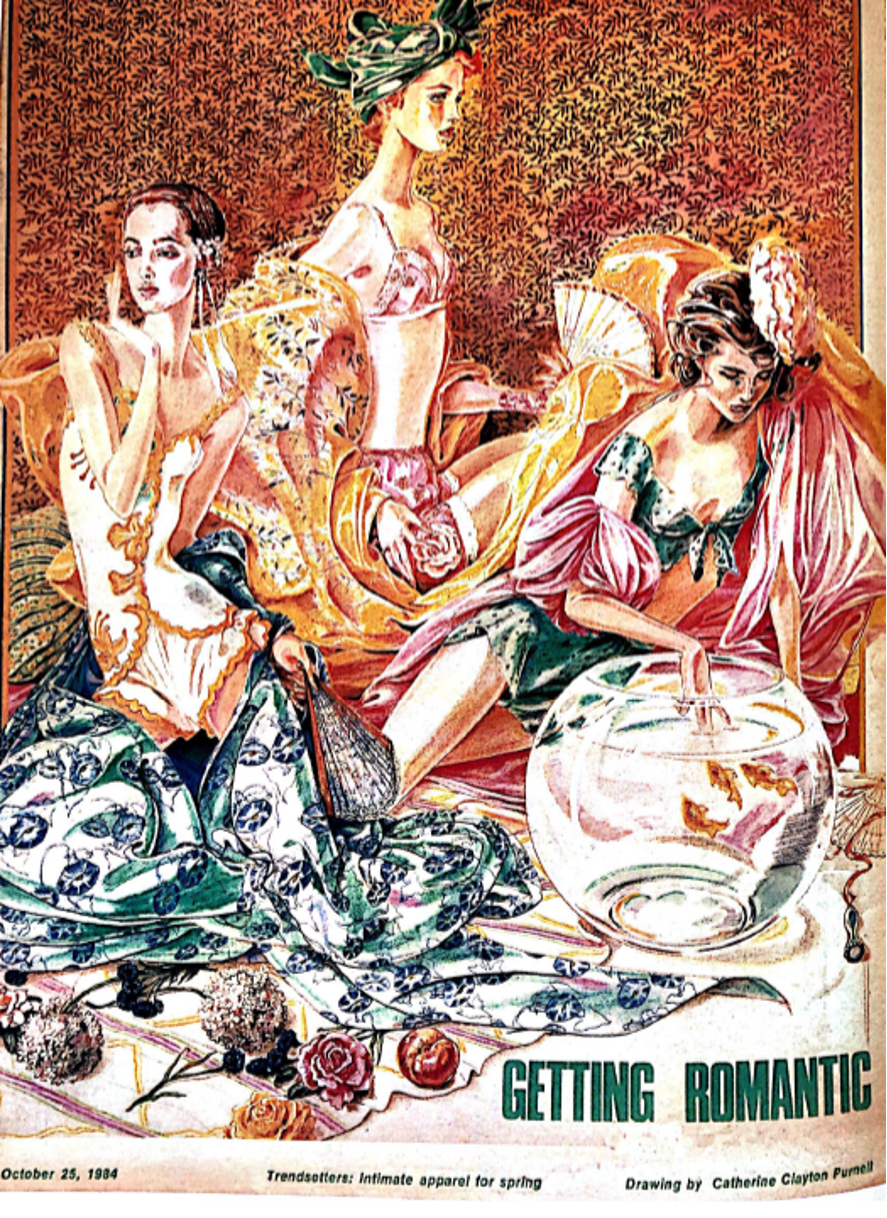 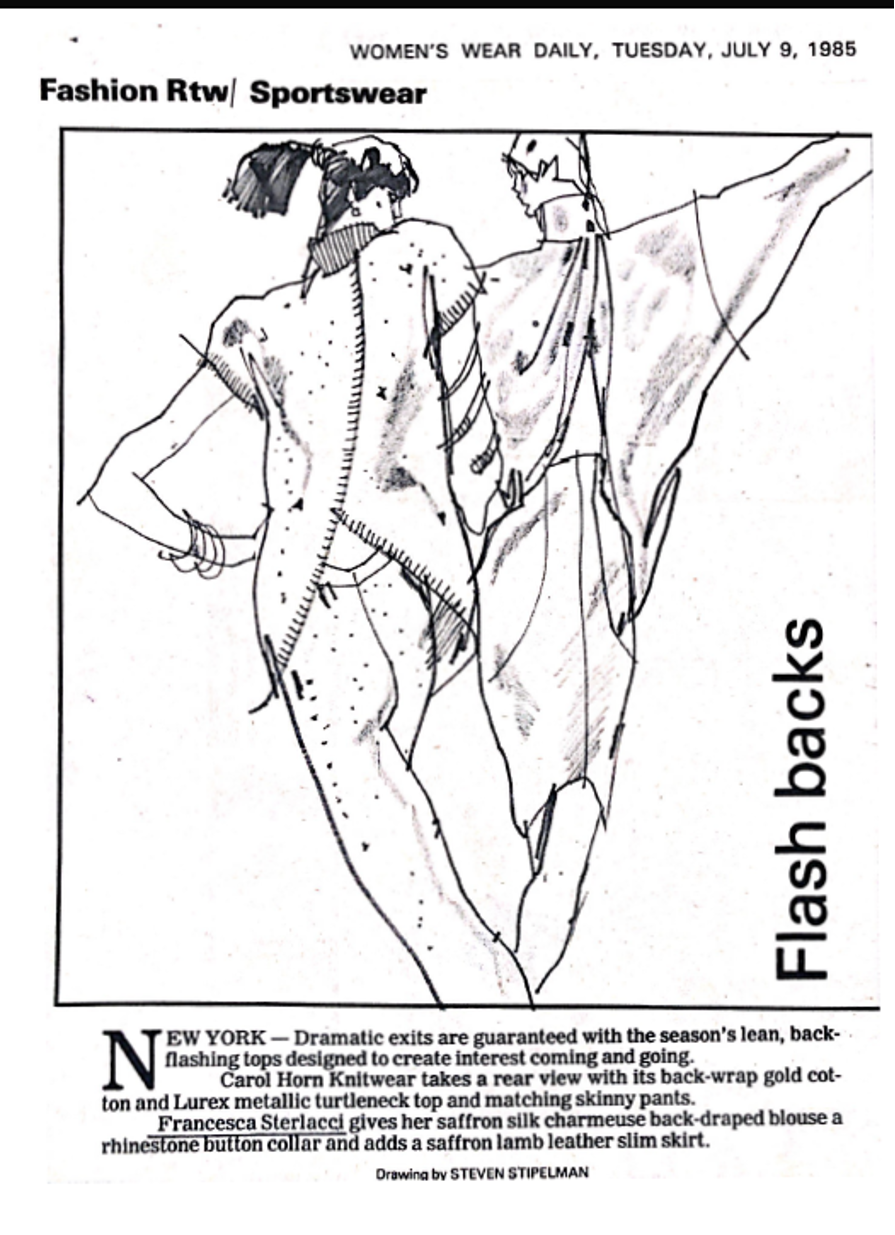 With a passion for illustration that began at Music & Art high school in Manhattan and continued awhile a student at FIT, Stipelmen would land a plumb job alongside Kenneth Paul Block at WWD in 1965. While most artists at WWD worked from a designer’s sketch when illustrating for the paper, Block and Stipelman would mostly work from live models and were sent to Paris to draw from the runways. Today, Steven Stipelman is a full professor at FIT. 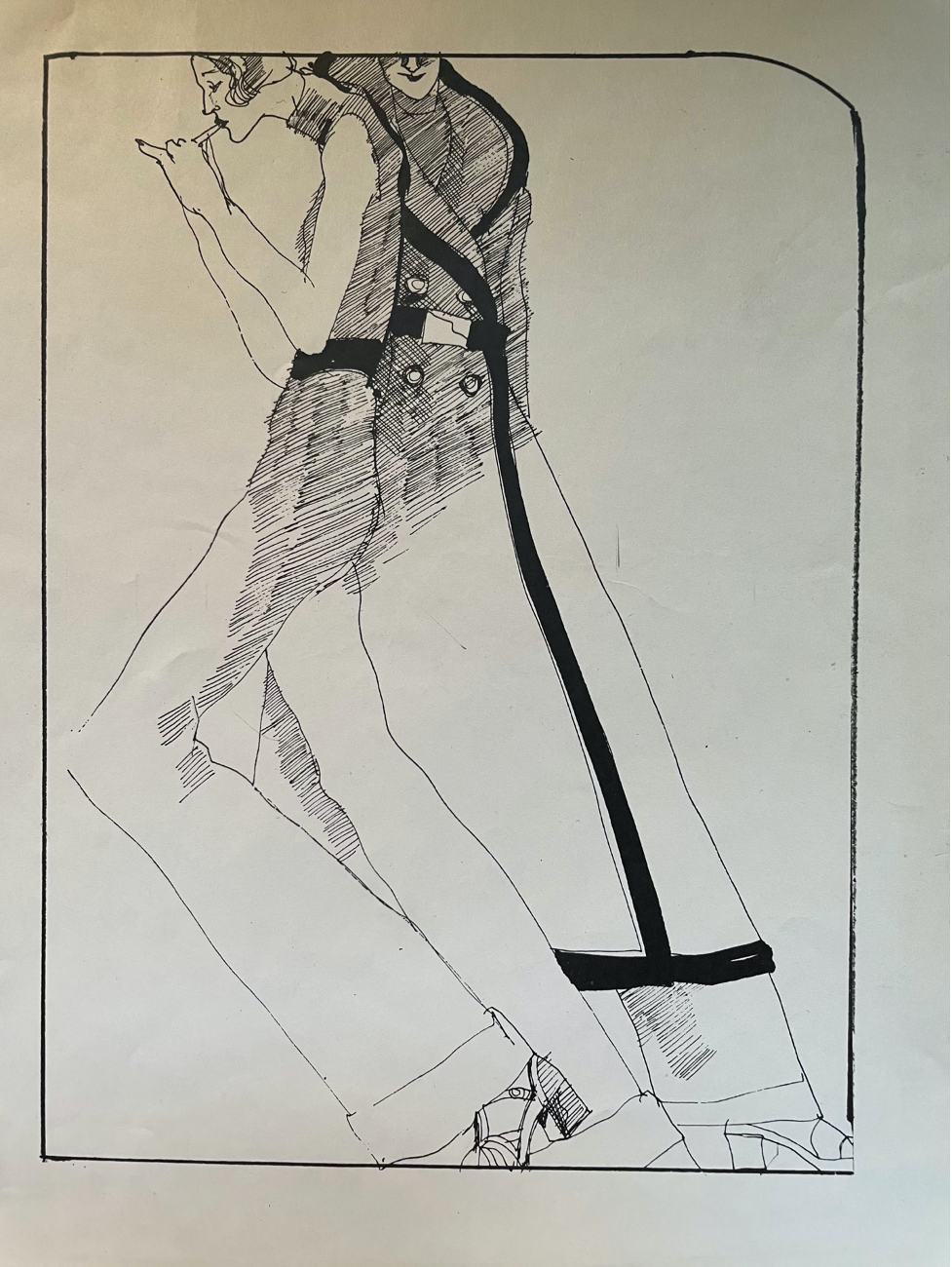 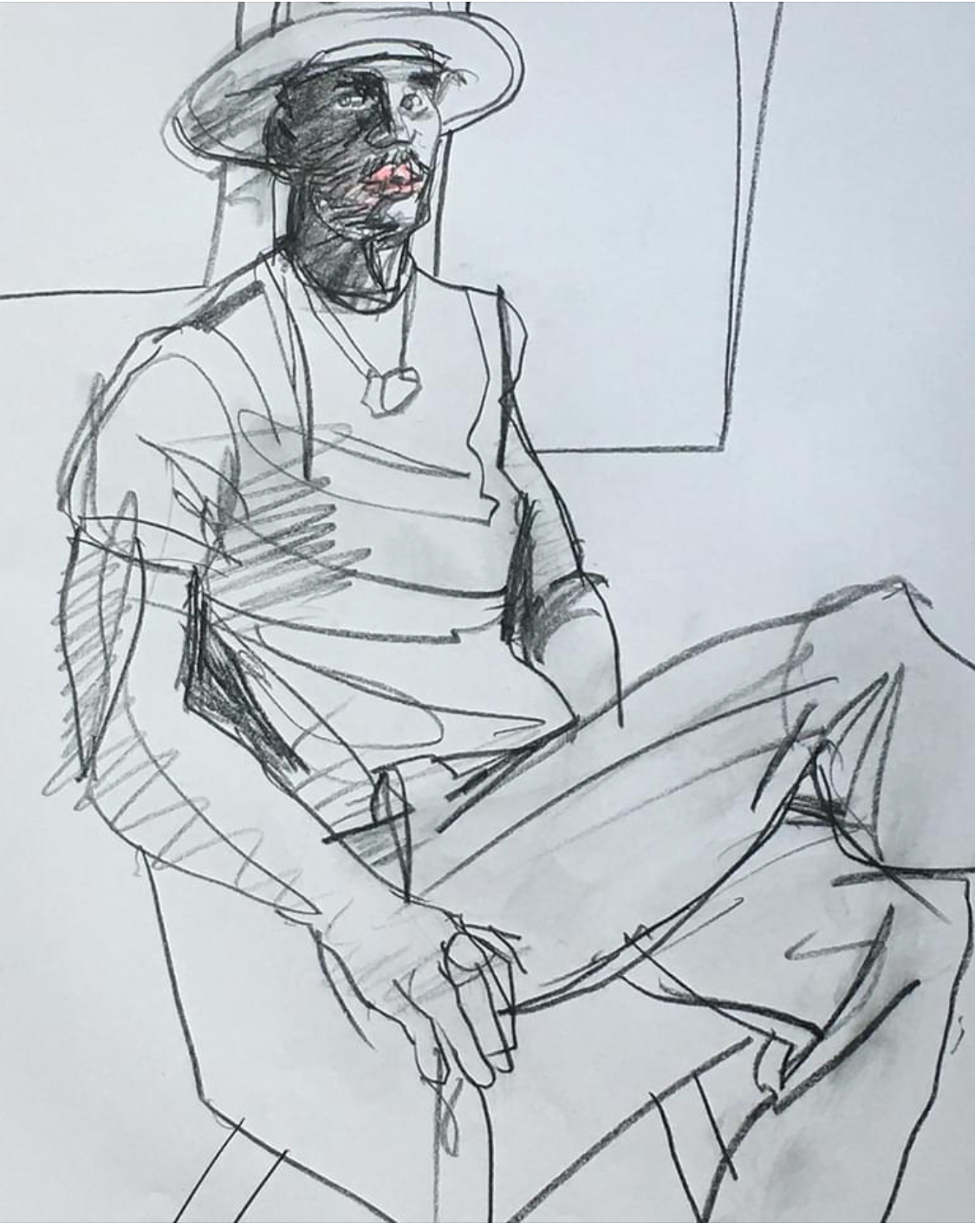 While UoF founder Francesca never had the honor of having Richard Rosenfeld sketch her designs during his tenure at WWD, we are fortunate in that he is one of our very own instructors on the UoF site, Congratulations to Richard for being included among this elite WWD group.

Richard Rosenfeld found his way to WWD as a student at Parsons in 1967. His illustration style has always been contemporary, graphic and modern and is most famous for his beauty and bridal illustrations. His illustrations often made the gowns more beautiful than they actually were in real life! 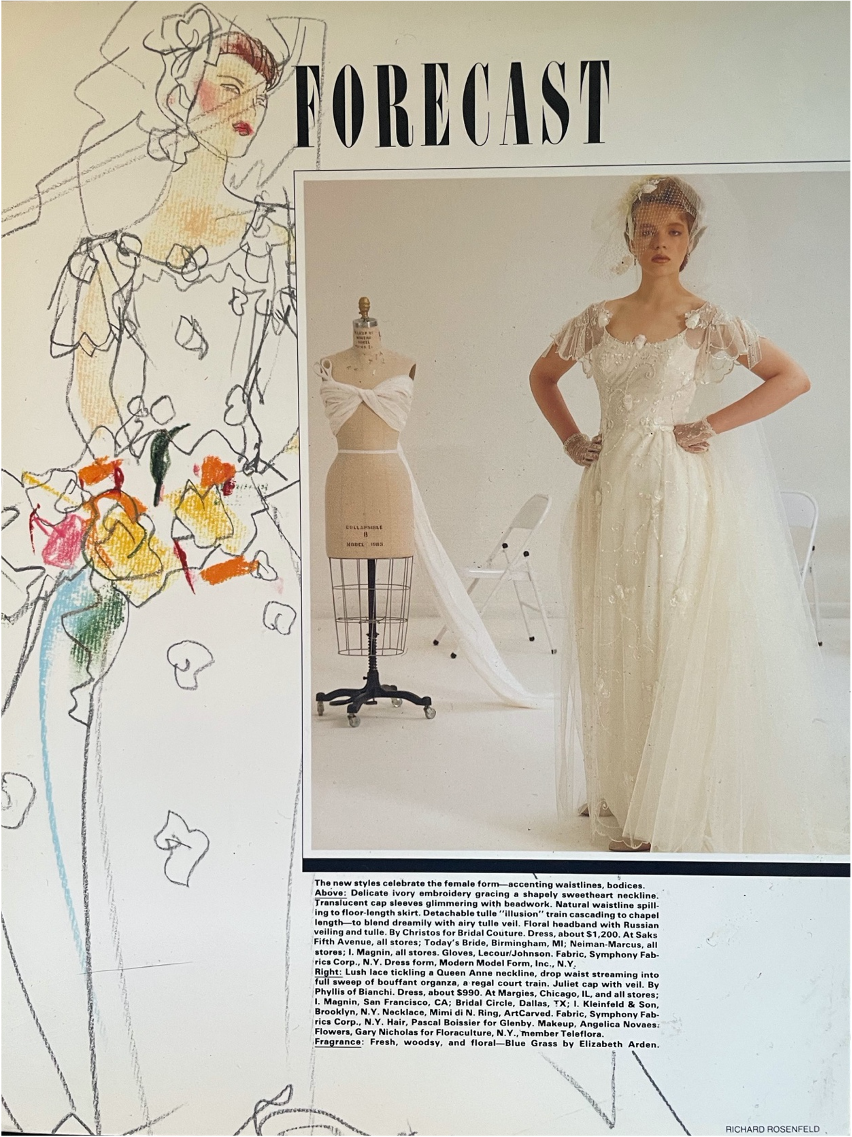 Today, Richard focuses on portraits and male figurative art and exhibits his work at the Leslie-Lohman Museum of Art in New York’s SoHo neighborhood, which showcases gay, transsexual and lesbian art. According to Richard, the art featured at the gallery is “political, it’s photography — it’s all of that.” 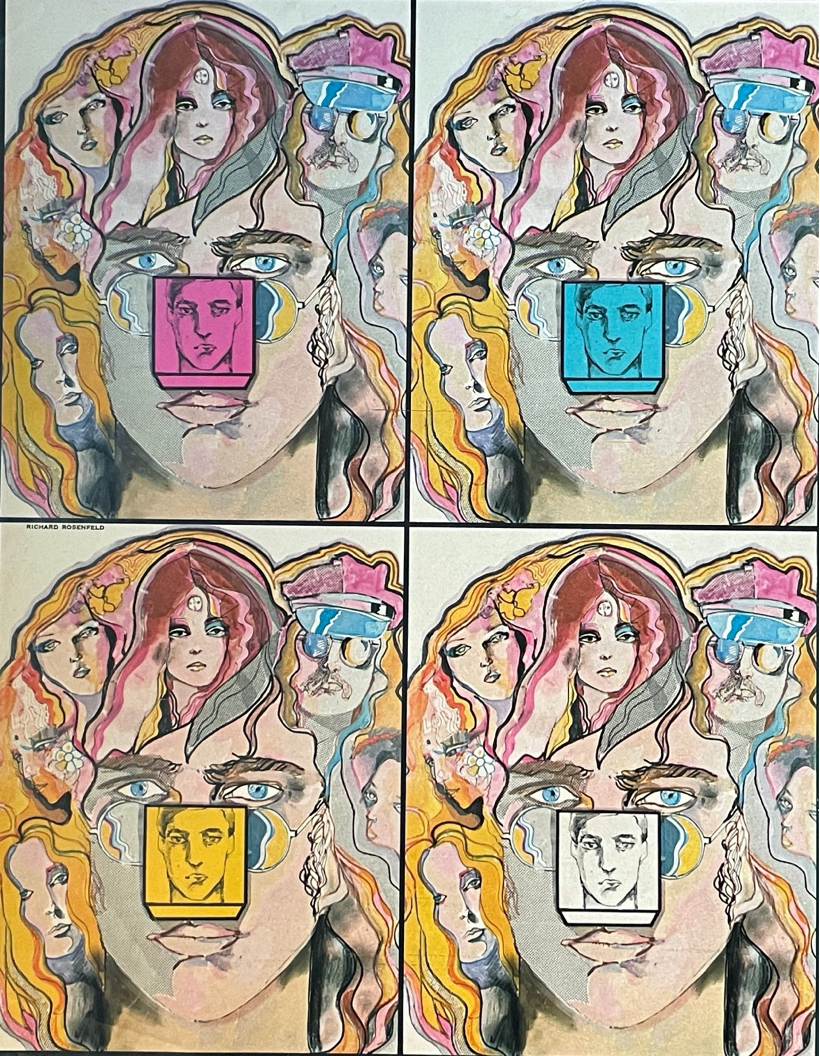 Can Fashion Illustration Make a Comeback?

At the onset of the pandemic in March 2020, art and photo teams at WWD had to rely heavily on illustration and collages to cover fashion, as New York City went into lockdown and shoots were impossible to schedule. A small glimmer of hope for the fans of fashion illustration?

At University of Fashion, we are ardent supporters of helping keep fashion illustration alive, which is why we have recruited some of the best illustrators in the business, Richard Rosenfeld, Steven Broadway and Roberto Calasanz. These extremely talented artists have generously shared their secrets by allowing us to film their art and skill in action. Watch as they bring a 2D sketch to life. It’s pure joy!

And so, to all of you aspiring fashion designers out there who love to illustrate, don’t let the digital age get you down, keep on perfecting your craft. Remember, practice makes perfect!

Let us know, do you have a favorite fashion illustrator?