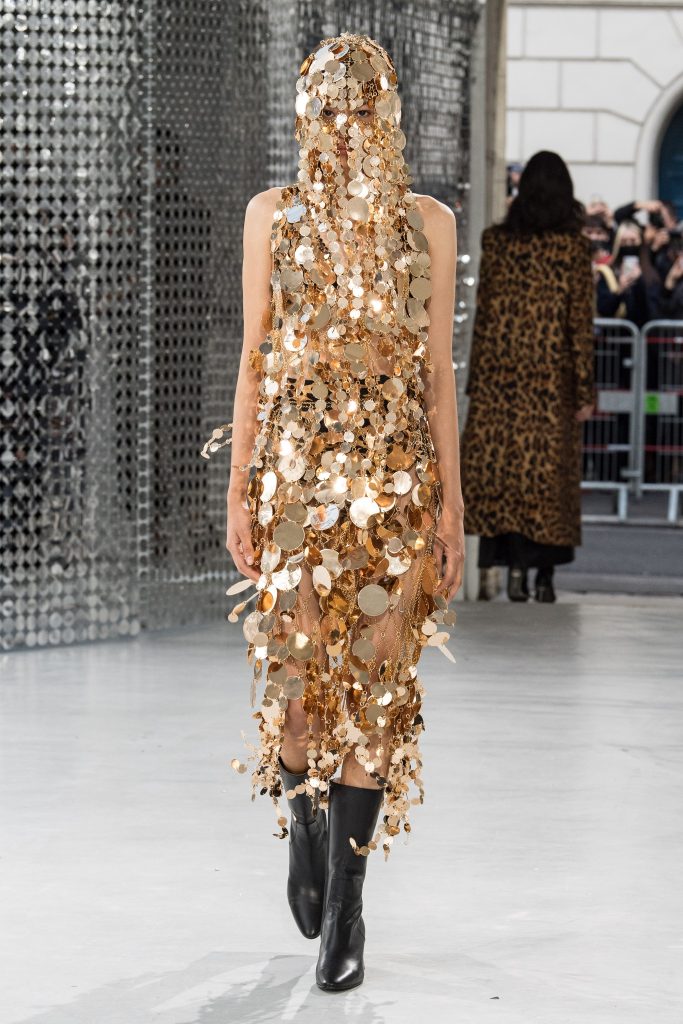 It’s a wrap! The Spring 2021 Fashion Season has officially come to an end. Now known as Phygital Fashion Month, a hybrid mix of digital and physical fashion presentations, Paris officially closed the season with a bang on  Tuesday, Oct. 7th. Some of the heavy hitter brands, Chanel, Balenciaga, Givenchy, Miu Miu, and Louis Vuitton turned video into an art form, while others chose to show their collection in the old-fashioned traditional runway format. Either way, it was a great season. 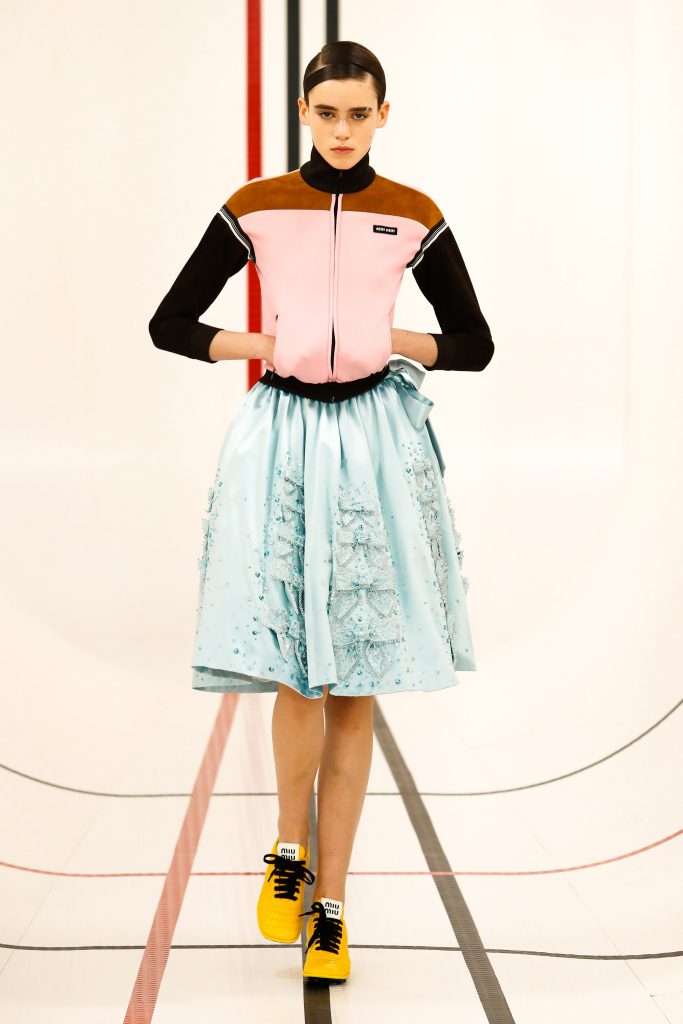 While many have debated how can the industry go forward with fashion presentations in the middle of a global pandemic, many designers responded with whimsical collections giving us all hope for a brighter and happier future. After all, the purpose of the runway to give us an escape from reality and transform us into the designer’s fictional collection world. Here are a few collections that ended Paris Fashion Week with bravado and excitement. 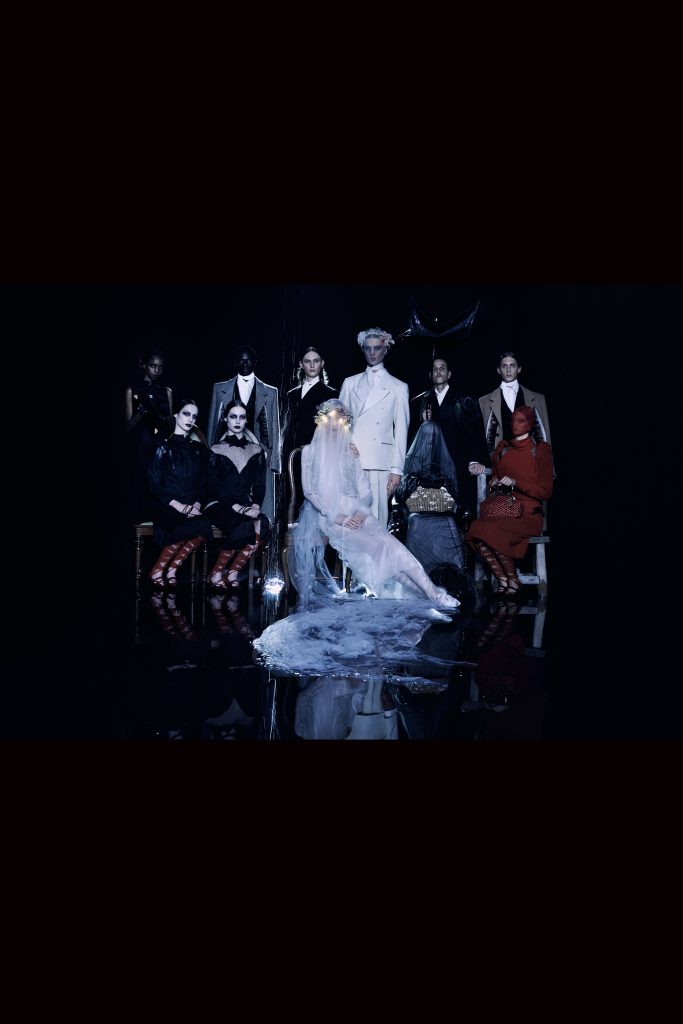 “Hope is the last thing to die” is an old Russian saying that inspired Balenciaga’s creative director Demna Gvasalia to move forward with creating his latest collection. Always one to defy fashion norms, Gvasalia and his husband created a music video to present his spring 2021 Balenciaga collection. In an interview with Vogue Runway, the creative director stated, “You know, I couldn’t wait not to do a show. It didn’t feel right with the way things are. So we’ve made a music video. My husband recorded that ’80s track by Corey Hart, ‘I wear my sunglasses at night’—because you know, is there anything more absurdly fashion than that? It’s also allegorical. You know, where is fashion going? It’s out there, searching in the dark at the moment, not seeing…”

In the middle of  pandemic and global unrest, the video might have sounded like an apocalyptic film; but thankfully that was not the case as the video was a tribute to Balenciaga’s nighttime people; each subject was captured walking Paris’ dark streets to a purposeful destination, all dressed in Balenciaga’s latest looks, complete with sunglasses. The video captured the essence of Paris’ nightlife and glamour as each model strutted the streets heading to see friends – an activity we all long for as we’ve spent months in quarantine. The video was upbeat, alive and oh so clever. Streets as the runway. Brilliant!

Gvasalia has always been an activist for the environment and being in isolation only strengthened his passion for sustainable fashion. In a press release, the house released specifics: “93.5% of the plain materials in this collection are either certified sustainable or upcycled. 100% of the print bases have sustainable certifications.” With the resources of the Kering Group at hand, Gvasalia said, “we discovered we could do it quite easily, with the exception of the fibers that are in some of the existing fabrics. There are solutions if you look for them. There’s a need to revise things. To start a new chapter.” He believes in the future consumers will be reusing the clothes they already own. This begs the question: how will your favorite pieces stand the test of time?

For spring Gvasalia hopes to answer that question by creating a timeless collection of great pieces that ranged from terrific outerwear to cozy knits and cool athletic wear. While most of the collection was genderless, such as the oversized outerwear, the distressed hoodies, classic denim, plaid shirting and oversized tailored suiting. The designer also created a few effortless wrap dresses for day, but for evening, he opted for casual glam with a metallic lingerie inspired top paired with drawstring trousers. These are real clothes that are meant to be lived in and loved.

Inspired by a childhood trip to Montreal to attend the 1976 Summer Olympics, Thom Browne can still remember Caitlyn Jenner winning the gold medal in the decathlon, that moment in time has stuck with him as he subtly references sport motifs in many of his collections. So, for his spring 2021 collection, Browne transports us to the future of the 2132 Olympics in a humorous video, which featured comedian Jordan Firstman and model Grace Mahary bantering like sports commentators on the moon, as models and flag bearers descend the stadium steps of the Los Angeles Coliseum; the location hosted the 1932 Olympics and was chosen for its Art Deco architecture.

While the video is set to take place in the future, the collection itself was inspired by the past, as Browne reinterprets the silhouettes of the ’20s and ’30s with plenty of drop waist dresses that were long and chic. The Deco silhouettes stole the show as Browne resumed his quirky experimental fashion that shifted the position of garments on the body, case in point, jackets worn as skirts.

Browne’s designs may at times be unconventional, but one cannot deny that he is a master craftsman. His his couture-like techniques were perfection: seersuckers made of cashmere, embroidery so thick it’s almost quilting, cable knits, intarsia suits, and trompe l’oeil dresses—all accentuating the intricate texture of each design. The collection was created in various shades of white as a Browne calls the hue, ‘a symbol of hope.’ In addition to traditional models, Browne also used actual Olympians in his video, suggesting that his quirky fashion can be worn by those brave enough to wear them.

With everyone spending quarantine time transfixed to their screens, Brown’s video has undoubtedly ushered in a new era in the fashion industry, “fashiontainment.” An interesting combo of fashion and entertainment. Watch this space. 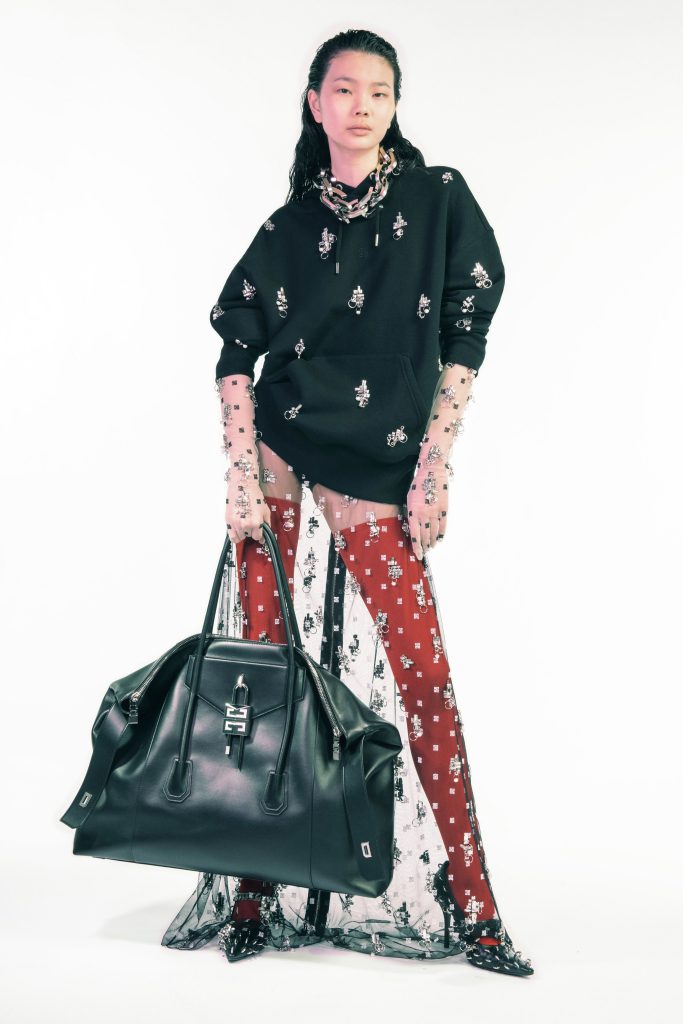 In June, Givenchy’s social media blew up when it featured a photo of the house’s new creative director, Matthew M. Williams, shirtless and tattooed in the house’s introduction of their new young designer. So naturally, Givenchy was the most anticipated collection of Paris Fashion Week. The collection was a perfect balance between the houses’ signature DNA and Williams’ elegant goth aesthetic, devil horns and all.

The debut collection was an edgy twist on established dress codes. There was no one theme per se, just simply great wearable pieces that Williams said he would personally wear. Digging into the archives of Givenchy, Williamson was inspired by the horn heels that were created during the Alexander McQueen’s era. There were also nods to Hubert de Givenchy: perfectly tailored suits with architectural-inspired details for both men and women, a basic denim jacket updated with unique reflective embroideries, tank tops with asymmetrical draping that were minimalistic perfection. 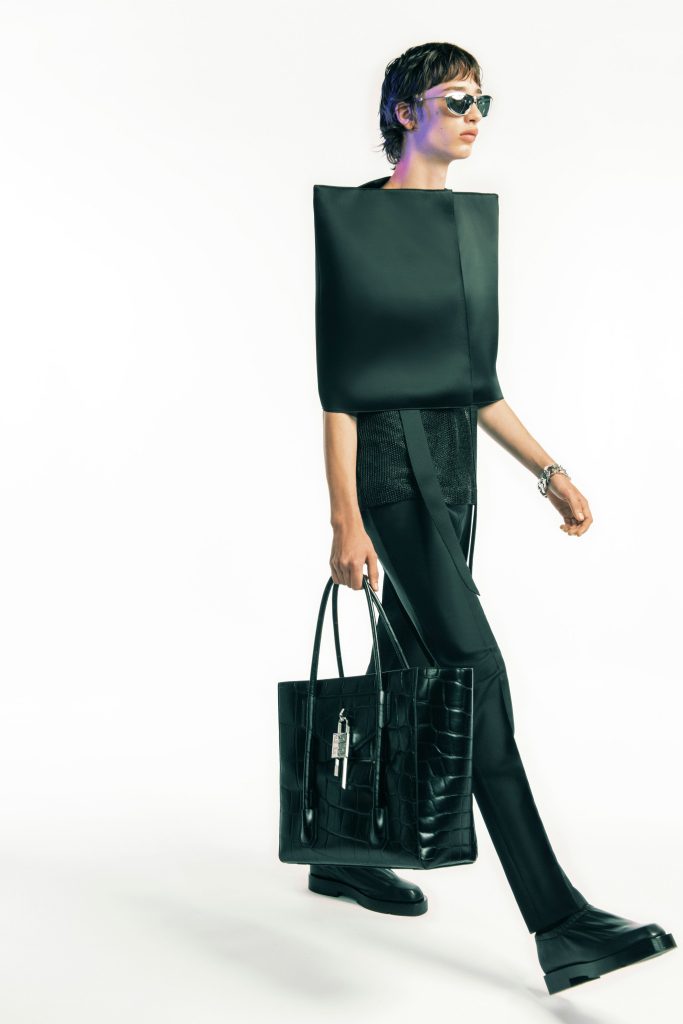 For evening, Williamson continued with the bold, yet rich, aesthetic that he is known for. Key looks included: a geometric square shaped cape for both men and women, intricate ring and crystal embellishments found on delicate mesh dresses and hooded sweatshirts, a laser-cut bustier gown and plenty of backless evening dresses. It is clear that Williamson’s vision of the Givenchy woman is a modern and powerful one.

Even in a global pandemic, the House of Chanel managed to serve up glamour, in the most ostentatious way. The full-fledged show was held in Paris’s soaring Grand Palais with the runway backdrop spelling out, in huge letters, “CHANEL,” reminiscent of the iconic Hollywood sign. Chanel’s creative director Virginie Viard seemed to be inspired by the modern life of actresses from their glamorous red-carpet moments to their daily coffee runs and everything in between. Her collection was a perfect combination of Parisian cool mixed with L.A.’s laid-back style.

Viard’s marriage of these two worlds worked like charm. She paired her classic Chanel tweed jackets with petal pushers or stone-washed denim jeans or with tiny miniskirts in pastel colors, all reminiscent of the excess of the 1980s, The hybrid mix of these two cities came in the form of an elongated, robe-like, pink cardigan with black piping, paired with a multi-charm necklace and a logo tiara headband. Other key looks ranged from graphic black and white floral dresses; neon colored billboard-inspired prints on t-shirts and day dresses;  a sequin pantsuit for evening; and plenty of red-carpet feathered looks.

While many red carpet events have been put on hold due to COVID, it’s clear that Viard is looking ahead to brighter days.

Louis Vuitton’s show was the official end to Paris Fashion Week and leave it to Nicolas Ghesquière to deliver the virtual reality experience we’ve all been waiting for.  The live show was held at the newly remodeled-by-LVM, La Samaritaine department store. Sprinkled among the audience were state-of-the-art 360-degree cameras that allowed spectators at home to pivot in their chairs, to watch models coming and going. It was almost like you were actually there!

“My question this season was less about one theme; it was about this zone between femininity and masculinity,” Ghesquière explained in an interview with Vogue Runway. “This zone is highlighted by nonbinary people, people that are taking a lot of freedom dressing themselves as they want, and, in turn, giving a lot of freedom to all of us. I found it inspiring to explore what the items are that represent this wardrobe that is not feminine, not masculine. I wanted to zoom in on that section in between.”

The show opened with a “Vote” top (a statement tee that many in the fashion industry are making) paired with pleated chinos cinched at the waist with a black belt. This relaxed street-ready look set the tone for a wearable collection that we all want to own right now, such as duster coats, mini dresses, and khaki suits. Ghesquière also showed skater-inspired tees that were spliced into elaborate techno patchworks. The designer showed off his technical skills by creating expandable jackets that were built with panels, so that the customer can wear it either fitted or oversized. He also used this same technique for trousers giving the wearer the freedom to style them as he or she chooses. It was all a fresh approach to Ghesquière’s beloved ‘80s silhouette with a genderless concept.

Do you have a fav collection, now that the spring 2021 season has come to an end?