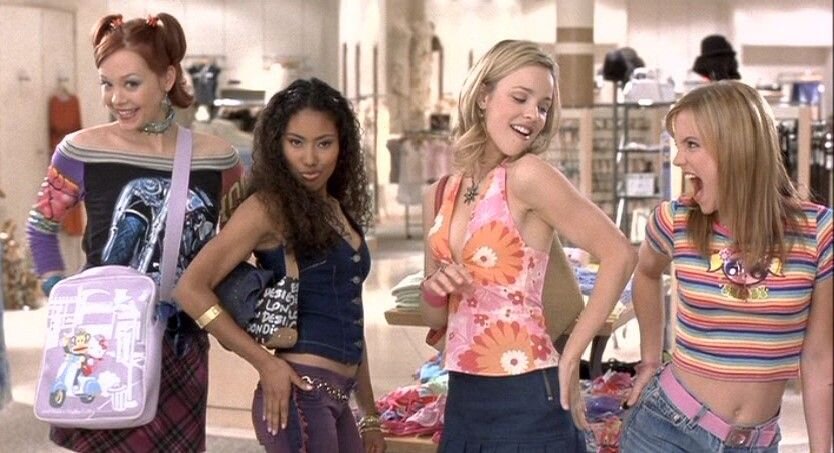 Stephen King, the famed American author of horror novels, once stated that “Sooner or later, everything old is new again.” And this quote couldn’t be more true when it comes to fashion trends. Fashionistas all know that fashion is cyclical, and, that if you hold onto your favorite fashion piece long enough, it will eventually come back in style. For the most part, these fashion cycles can take decades to come full circle, but in less than 20 years, Y2K fashion has hit the mainstream and is quickly emerging as one of the biggest trends in 2021, thanks to social media platforms like TikTok and Instagram. Gen Zers can’t get enough. Videos tagged “#Y2KAesthetic” and “#Y2Kfashion” on TikTok have a collective 405 million views and counting.

Gen Zers, those born between 1997 and 2012, were just babies when Y2K fashion was popular the first time around, so they are fully embracing the midriff-baring, butt-skimming looks favored in the early 2000s. This period, in fashion, was known for excess and driven by pop culture and ultra-consumerism. Paris Hilton became the face of fashion and trends and “that’s hot” became her trademark catchphrase. Pop culture celebrities like Britney Spears, Lindsay Lohan, Cameron Diaz, Beyoncé, and Nicole Richie quickly became fashion trendsetters with their velour Juicy Couture tracksuits, bedazzled Ed Hardy t-shirts, super low-cut denim pants, low slung belts, cropped tops, and Von Dutch trucker hats. Celebrities had lots of fun with fashion. And isn’t a little fun what we all need right now? 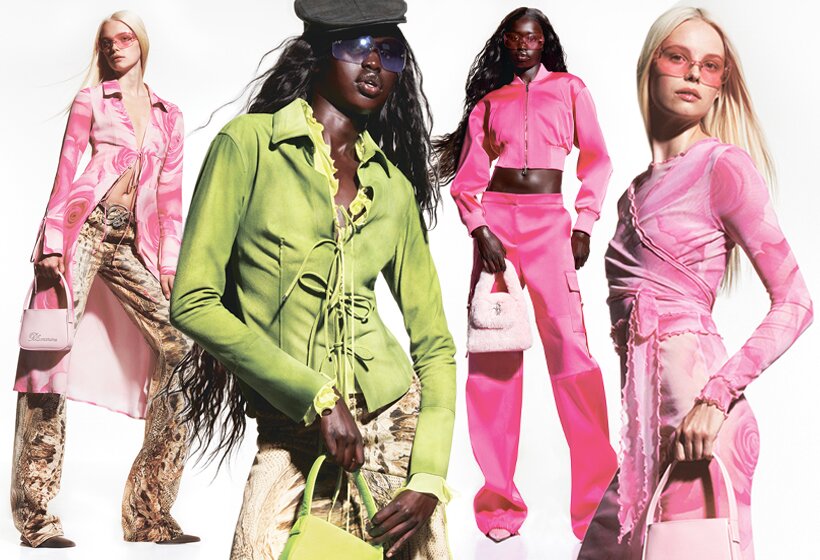 Currently, fashion designers around the world are embracing the Y2K fashion trend. Blumarine’s creative director, Nicola Brognano, looked to the early aughts for inspiration. For resort 2022, Brognano debuted his ruffled minidresses, bedazzled belts, and low-slung denim. In an interview with Vogue, the creative director stated, “My Blumarine is more dirty, bitchy, sexier.” And now, the fad is gaining momentum and hitting the streets. Currently, stars like Rihanna, Dua Lipa, Bella Hadid, and others have been sporting their best Y2K looks and giving them a new, modern twist.

WHAT EXACTLY IS Y2K FASHION? 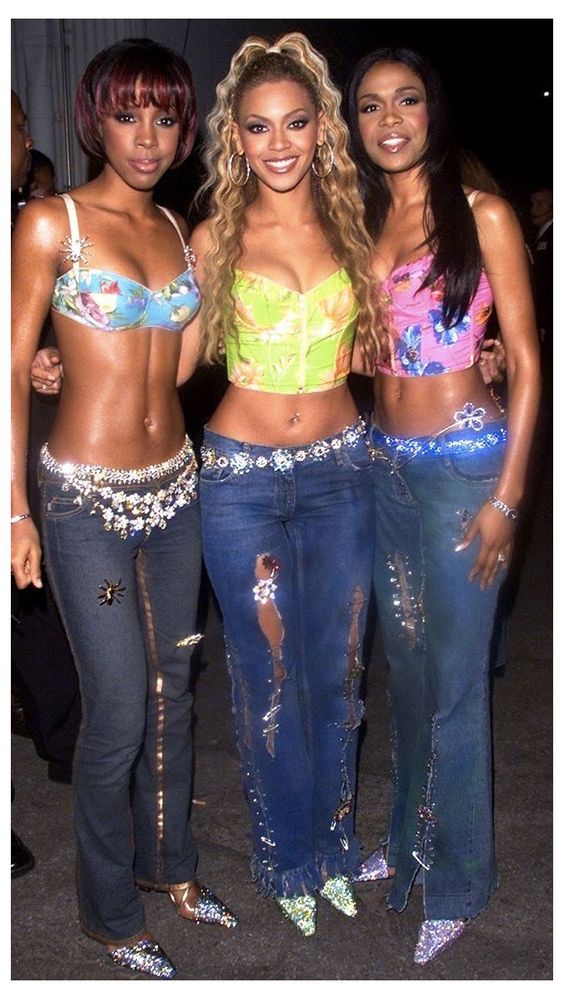 Over the past few years, ‘90s minimalism was one of the biggest trends that social media influencers gravitated towards. But today, there is an upsurge in Y2K-inspired looks. Y2K fashion is all about making a statement, it’s the “look at me” mentality that contributed to the rise of reality TV stars. Officially, Y2K covers the early-to-mid 2000s and so for Millennials it captures the energy (and shopping habits) of their childhoods and early teens, while for Gen Zers it reminds them of happier and simpler times. 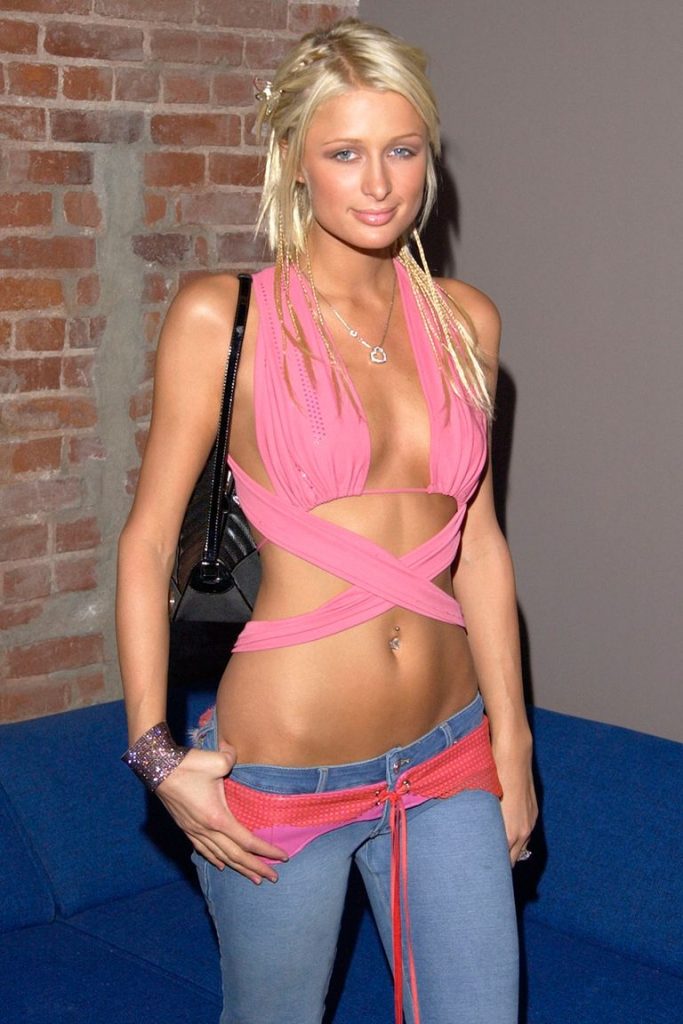 The early aughts were undeniably defined by women who ruled pop culture in both music and film. Destiny’s Child, Britney Spears, Christina Aguilera, and Missy Elliot topped the music billboard charts. Paris Hilton and Nicole Richie were socialite royalty and film characters such as Elle Woods in Legally Blonde and Regina George of Mean Girls became iconic fashion legends with their hot pink everything, bedazzled logos, teeny-tiny bags, denim on denim, and yes, their Juicy Couture.

While this over-the-top fashion movement is hitting the mainstream, today’s “It” girls and boys are styling these trends in a more modern way. 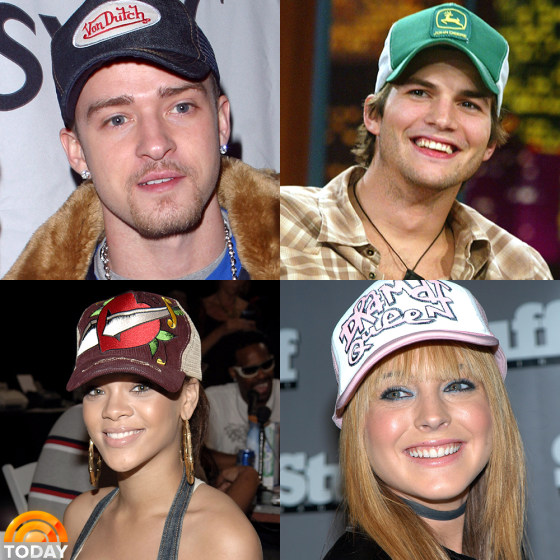 In the early aughts, everyone rocked a trucker hat. It was one of the most popular tacky-chic accessories of that era and one that has made the biggest comeback so far. A trucker hat is much like a baseball cap, except that it has a graphic front and a mesh back. Justin Timberlake helped launch the trend in 2003 when he wore a Von Dutch hat to a Grammy afterparty. Soon thereafter everyone was sporting the trucker hat, from Ashton Kutcher to Lindsay Lohan—especially the Von Dutch version, which was the “It” label of the time. 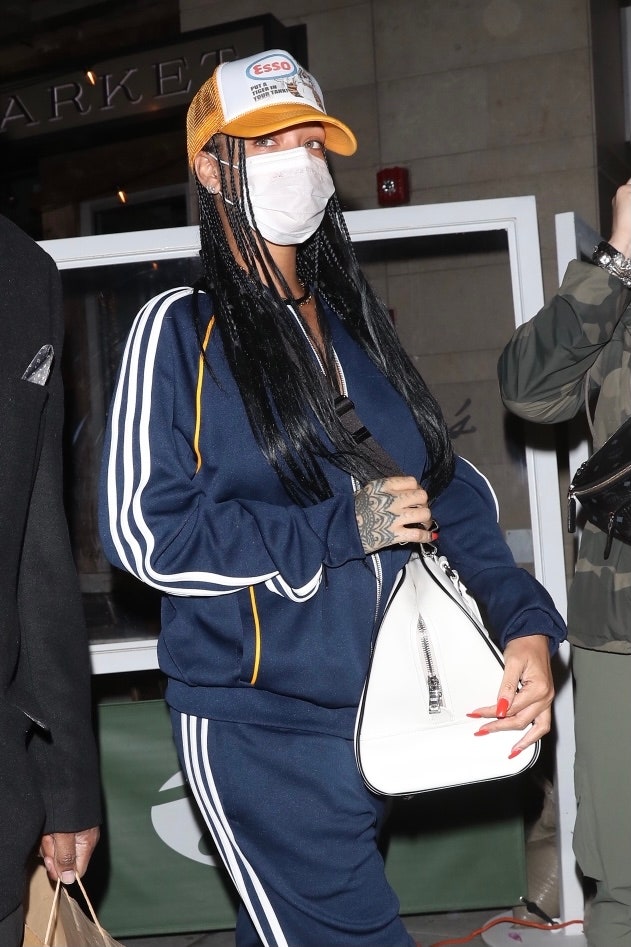 Rihanna in an Esso trucker hat in the spring of 2021. (Photo Credit: Getty Images)

Today, celebrities and fashion influencers ranging from Rihanna to Hailey Bieber have all been photographed wearing the beloved cap. 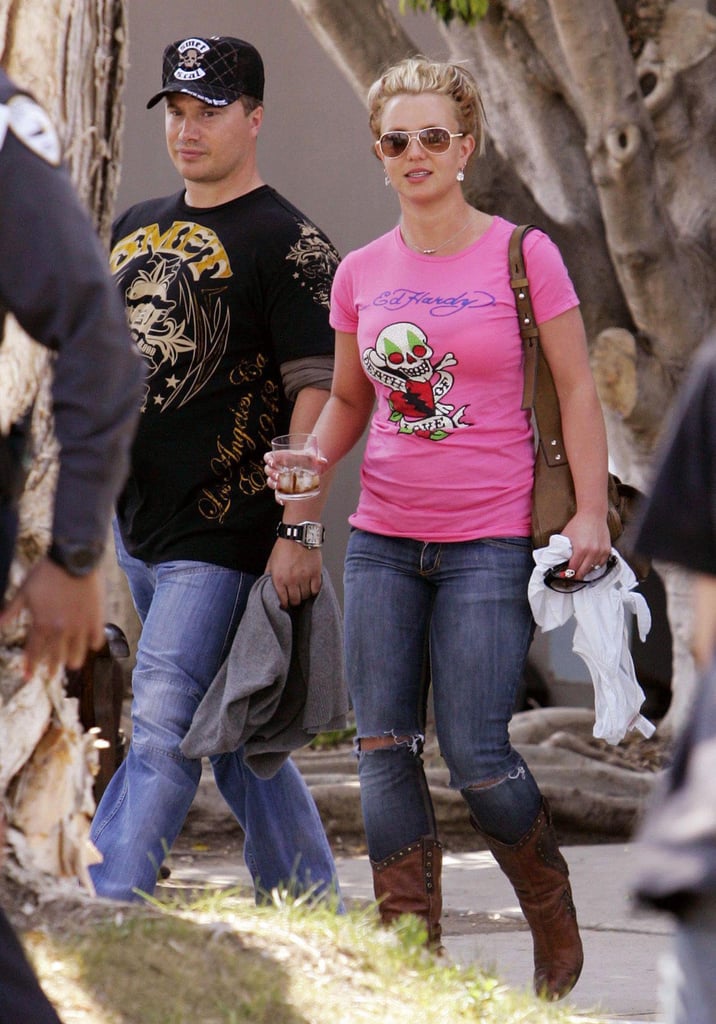 Fashion lovers were obsessed with Ed Hardy tees in the early 2000s. The overpriced tees with printed skulls and tigers, and bedazzled tattoo motifs, were spotted on just about every celebrity. On the fashion marketplace app, Depop, vintage styles are now going for upwards of $200. In fact Ed Hardy merch was in such demand that they even launched an offshoot streetwear line, called By Appointment Only. The idea that these tacky tees would make a comeback was pretty unthinkable until recently when Bella Hadid and Addison Rae both rocked the tops. Rae actually wore her pink Hardy tee as a dress with platform flip-flops for the full Y2K effect. 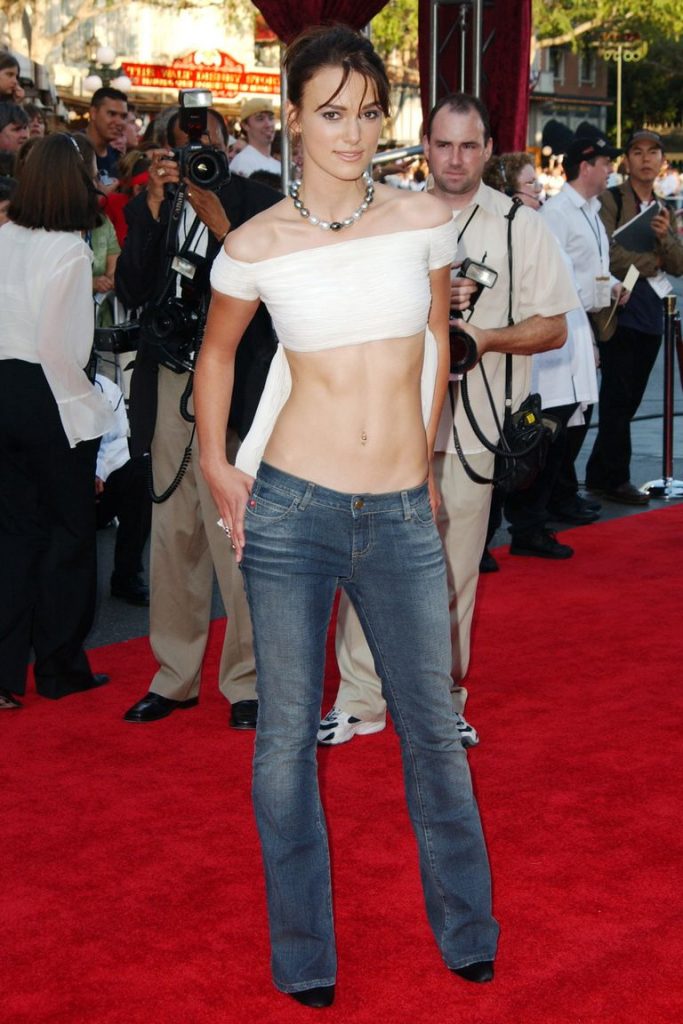 One of the sexiest Y2K looks making a splash at the moment is the tricky low-rise styles that were all the rage in the early 2000s. Every young girl rocked the style, even though the denim jean barely covered their butt-cracks). Fashionistas today are ditching their high-rise denim pants for these low-rise looks, which back then were red-carpet staples with celebrities such as Keira Knightly, Lindsay Lohan and Destiny’s Child. 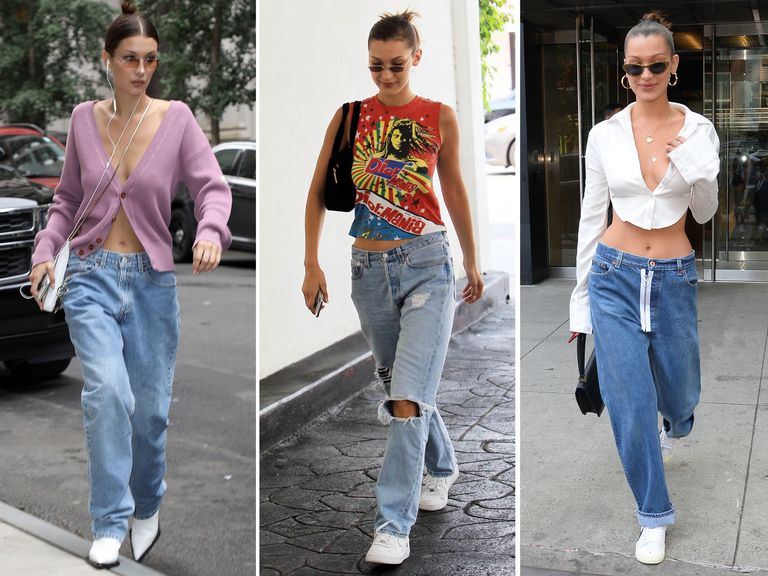 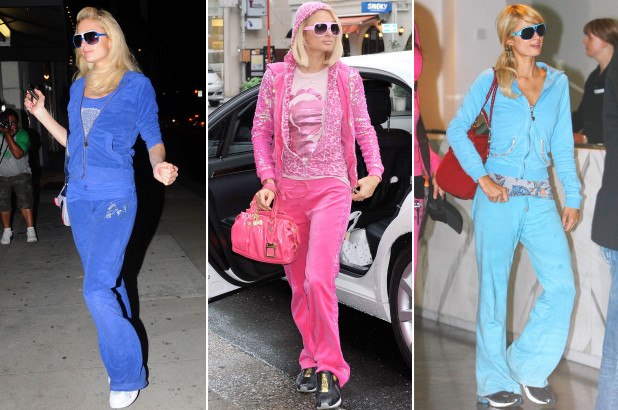 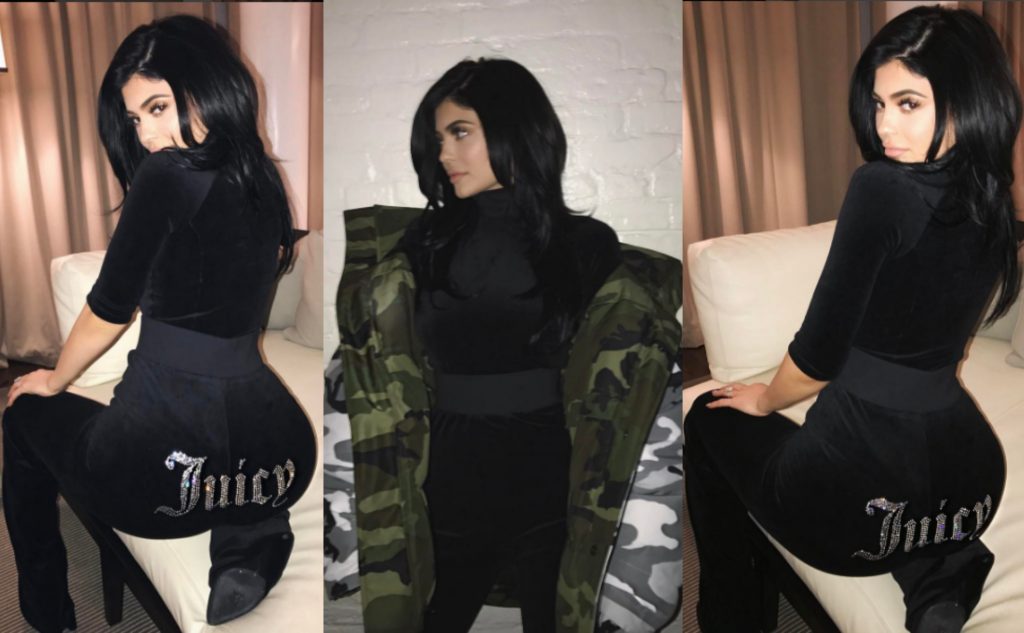 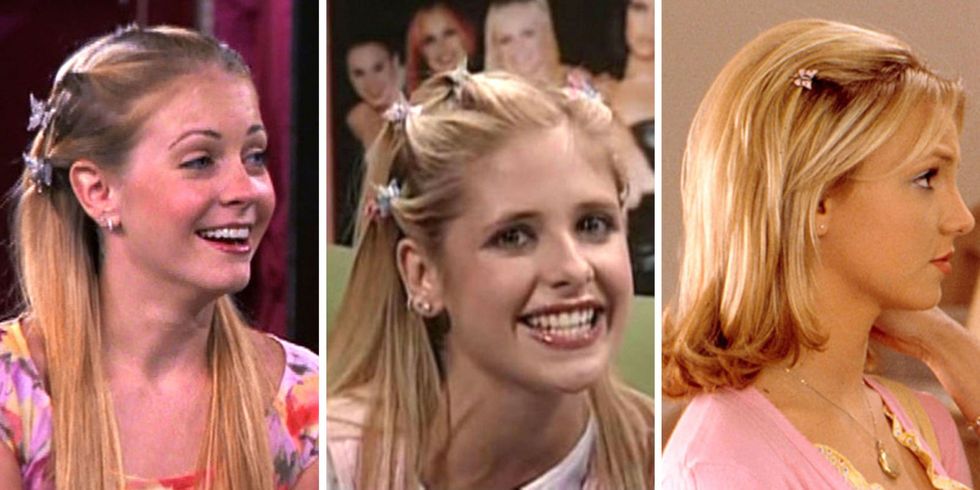 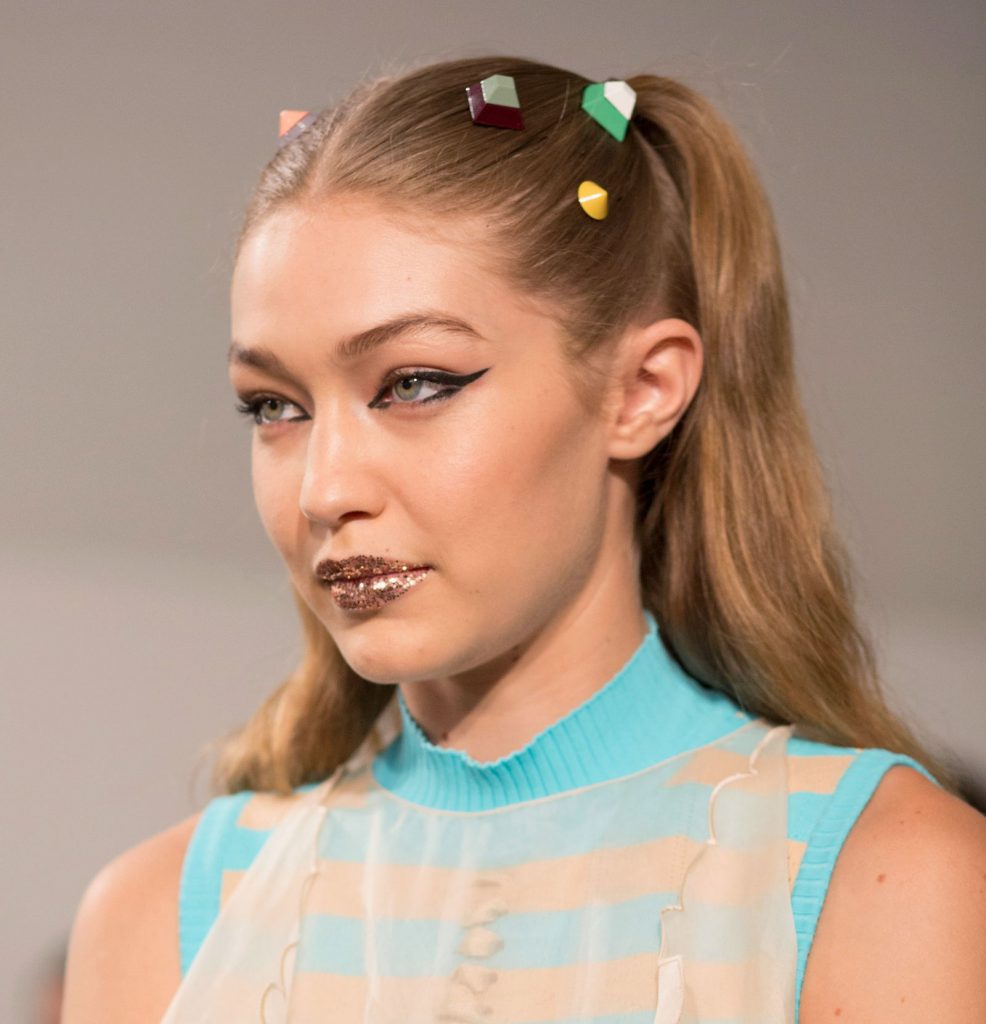 Sure, these over-the-top statement looks may be a boring rehash for some of us who lived through them the first time around, but when done right and creatively updated these Y2K trends can be new and fresh. This trend will never be a fav of the minimalist, but for the maximalist at heart, a new Y2K fashion mash-up will definitely let the inner 2000s teen in you go wild!

So tell us, what is your favorite Y2K trend?