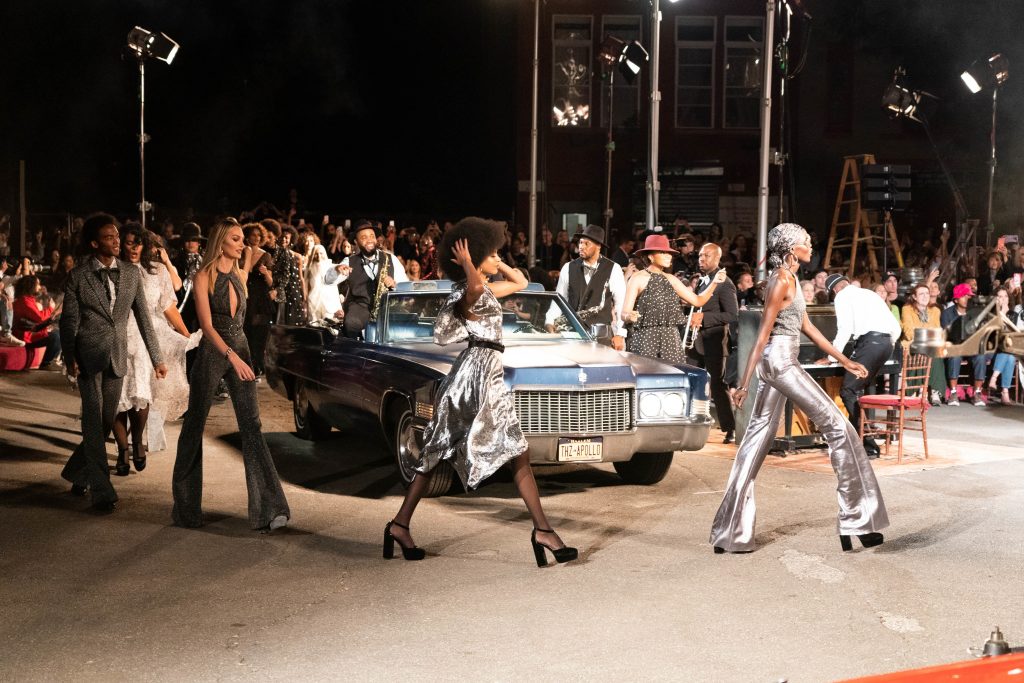 The excitement and thrill of New York fashion week has come to an end, and while all the names we know and love have put on fabulous shows and parties, such as Prabal Gurung’s chic 10th Anniversary showing, Tommy Hilfiger and Zendaya’s block-party show at the Apollo Theater in Harlem (see image above), and Tom Ford’s subway tunnel show, we are finally getting to see some new ‘fashion blood’ getting attention.

Unlike any other city in the world, New York has always been a melting pot of diverse cultures and ideas, so fittingly, the city that kicks off fashion month has embraced a handful of CFDA-approved emerging designers that are about to take off. 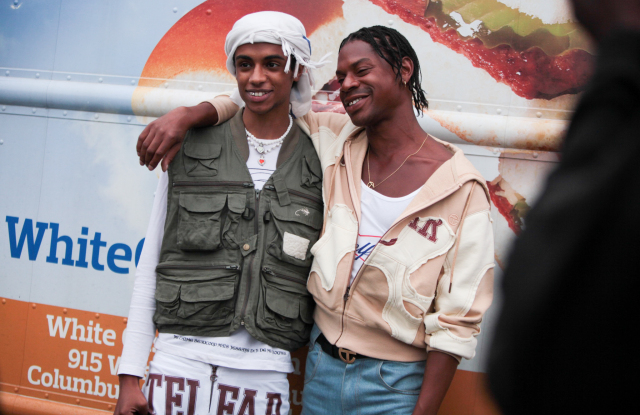 Telfar Clemens, known for his non-gender collections,  launched his namesake brandin 2005, however, he finally received recognition in 2017 when he became the winner of the coveted CFDA/Vogue Fashion Fund Award.  For Spring 2020 he will be showing in Paris on Sept. 24th, but Clemens did not forget about the city that launched his career and hosted two parties, one with the beloved retailer Opening Ceremony, and the second, a party that doubled as a screening of his film.

According to WWD, “Guests got their first glimpse of the designer’s new collection in a six-minute clip of a film scripted by “Slave Play” writer Jeremy O. Harris and artist Juliana Huxtable that will be shown in Paris as part of the show.”

“Are you a citizen of united communities?” was one of the questions posed in the dialogue as characters walked through airport security, or stood on buoys in open water with the Manhattan skyline behind them.

As for the clothes in the film, there were plenty of utility-inspired looks, thigh-hole track pants and Budweiser silk printed shirts alongside Telfar’s new jewelry range that plays on his initials “TC,” and popular logo-embossed tote bags. 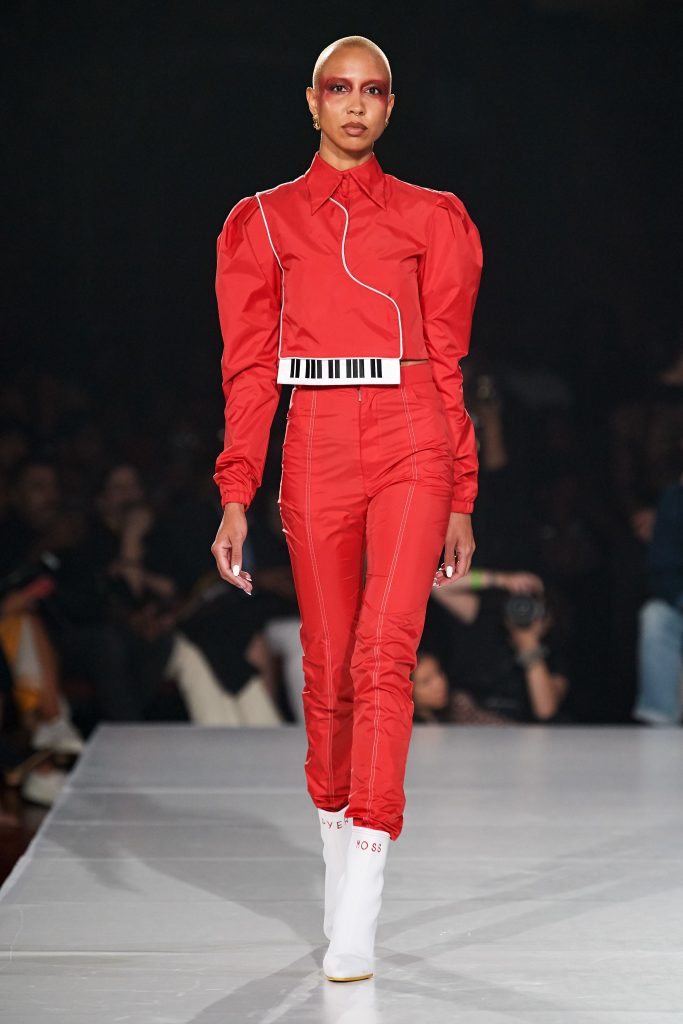 Another CFDA/Vogue Fashion Fund winner is Kerby Jean-Raymond, the designer behind the label Pyer Moss. The young designer has become a storyteller. Season after season he creates a collection based on the history and popular culture within the African American community. For spring 2020 he did not disappoint and his show was one of the most buzzed about shows of the week.

The show took place at the King Theater in Brooklyn, titled: Sister, the third and final chapter in the Pyer Moss trilogy, inspired by Sister Rosetta Tharpe. A singer-songwriter who rose to popularity in the 1930s and ’40s, Tharpe is considered to be the godmother of rock and roll, though her legacy has been diminished. “I think relatively few people know that the sound of rock and roll was invented by a queer black woman in a church,” said Jean-Raymond backstage during a Vogue interview, moments after the show. “I wanted to explore what that aesthetic might have looked like if her story would have been told.”

The show opened with a powerful sermon delivered by writer Casey Gerald, who is known for his incisive social commentary, it was both uplifting and unapologetically political, referencing the anniversary of slavery in America.  Then a choir of about 70 voices broke into song and the show began. The musical references were loud and clear with a guitar motif that was threaded through curvy lapels of satin overcoats, and the most literal reference was a novelty guitar-shaped handbag, as well as the keyboard print trim on a puff-sleeve blouse.  Jean-Raymond also gave a shout-out to the hip-hop era, which is not surprising considering his new role as artistic director at Reebok. 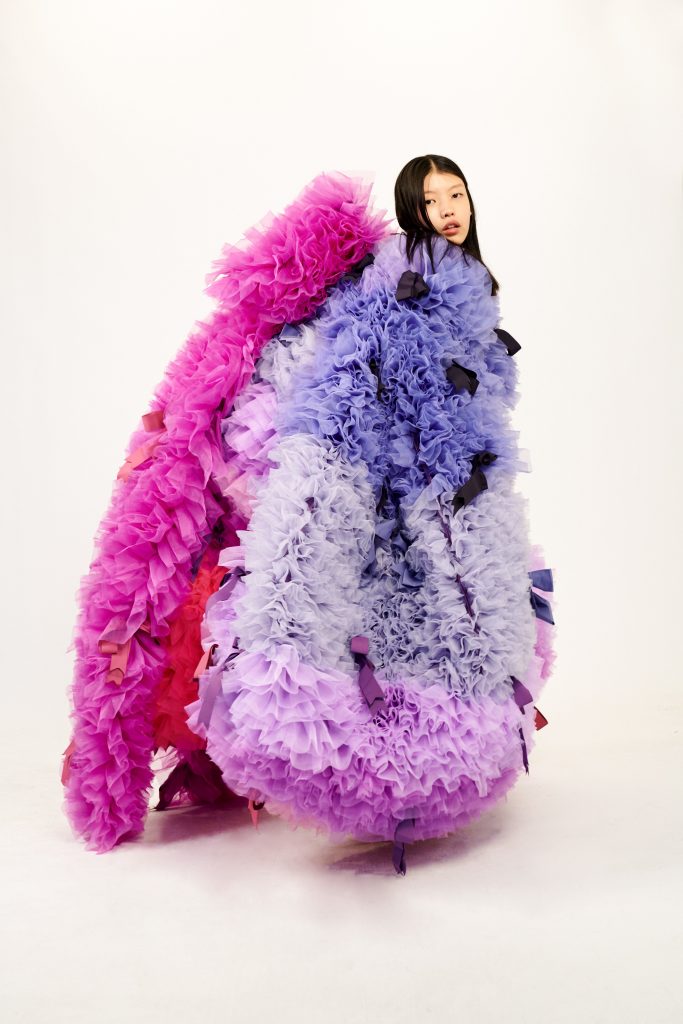 Last winter, Tomo Koizumi’s frothy confections caught the attention of stylist extraordinaire Katie Grand. She quickly contacted the avant-garde designer and had him flown to NY to debut his creations during the Fall 2020 shows.  For his sophomore collection, Marc Jacobs has once again graciously lent his atelier for Tomo Koizumi to use, as well as his Madison Avenue boutique for Koizumi to present his latest innovative pieces. It’s so refreshing to see designers who have made it, help and embrace the newcomers.

Tomo Koizumi’s clothes are far from the ready-to-wear looks that NY fashion week showcases; his pieces are costume pieces that provoke and inspire the audience. Koizumi casted 18-year-old trans model Ariel Nicholson for his one-woman show. The presentation showcased Nicholson dressing and undressing in seven garments as she twirled around center stage. Each frothy look was made of hundreds of meters of ruffled Japanese polyester organza that utilize only one zipper. The construction is spectacular, as ruffles and bows cascade over each other like cupcake frosting.

In an interview with Vogue the designer said, he chose the bow motif because he wanted the collection to represent his gift back to the people who made him. “I just want to bring joy,” he said simply. Mission accomplished. 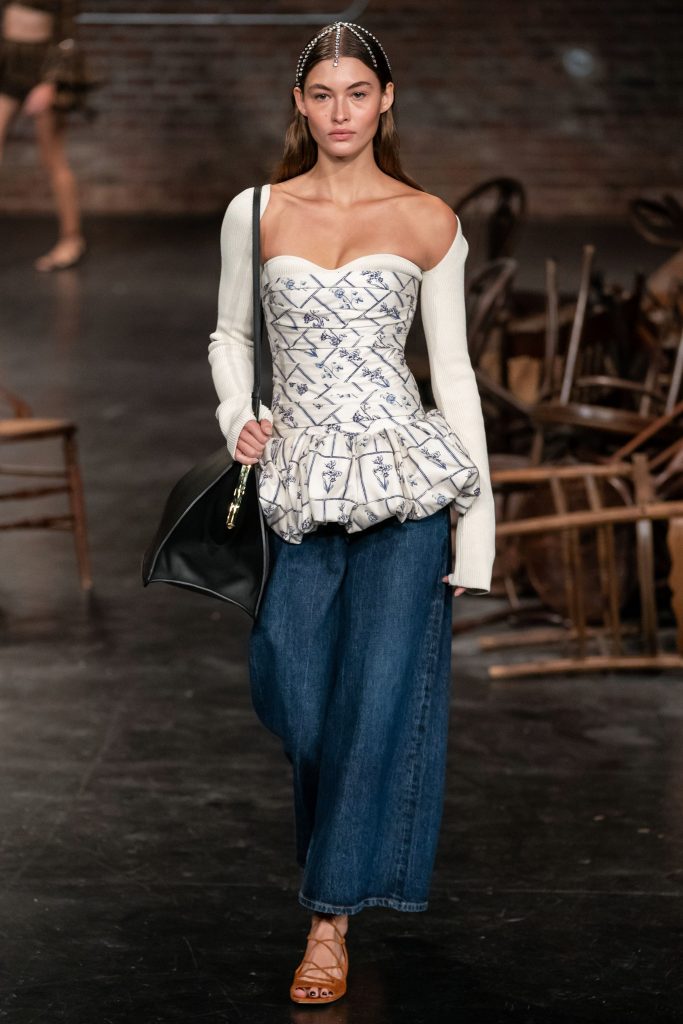 There are very few young designers who can balance retail success with being an editorial favorite, but Catherine Holstein, the designer behind the coveted Khaite (pronounced Kate) label has managed to do both. The core of her business, or as Holstein refers to them as “cherished items,” are in her jeans, shirtings and knits. And yes, Holstein in responsible for the internet frenzy of Katie Holmes’ $520 cashmere bra and cardigan; both items which immediately sold out on Khaite’s website.

For her spring show, Holstein showed a few of Khaite’s cult favorite lux basics, but, rather than playing it safe, Holstein opted for experimental pieces that were charming and at times, flashy.

Holstein’s collection was inspired by her childhood summers at her grandmother’s house in Woodstock, Vermont; so fittingly there were plenty of plaids and florals that were reminiscent of the home’s late 60’s furnishings, but with a modern and cool twist.  Key looks included a suede fringe jacket, peplum tops over denim, a deconstructed suit, and a corset top over a satin sarong.

Let’s give the fashion industry and the CFDA a round of applause for finally stepping up to the plate to support emerging designers. Not only have the shows included a full range of diverse models on the runway (ethnic, size, and gender diversity) but they are demonstrating an ‘all inclusive’ range of designers into their ‘club.’ A nice message especially in such divisive times. Let’s see how responsive brands across the pond respond in kind.

So tell us, who’s your favorite up-and-coming designer and why?