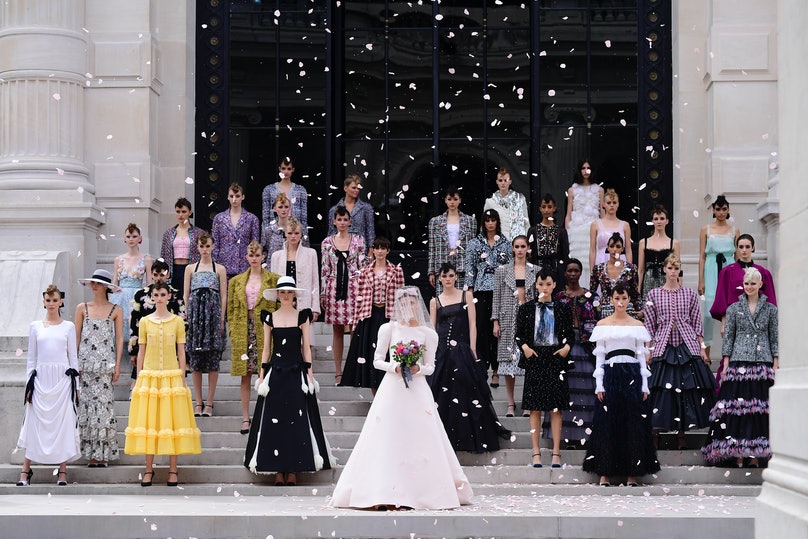 Exciting news for fashion insiders, most of the Haute Couture 2021 shows in Paris were IRL (in real life) this season, as runway events began on Monday, July 5th. Haute couture shows are where the most whimsical and fanciful looks are to be found. They are the experimental breeding ground for designers to try out new ideas and design concepts.

These one-of-a-kind custom looks are constructed mostly by hand from start to finish. Each piece is made from high-quality, expensive and often unique fabric and then sewn together with extreme attention to detail, and then finished by THE most experienced and capable of artisans—often using hand-executed techniques.

An haute couture garment is a garment created for an individual client, tailored specifically to that customer’s measurements and will compensate for any body challenges (for example, one shoulder higher than the other, a rounded back, etc.). Considering the amount of time, money and skill allocated to each completed creation, these one-of-a-kind garments have an out-of-sight price tag. If you need to ask the price, you are considered tres gauche.

Haute couture in France, is a protected name that may not be used except by firms that meet certain well-defined standards. Only a select handful of labels can join the French couture calendar and enjoy the privilege of being considered an haute couture house. 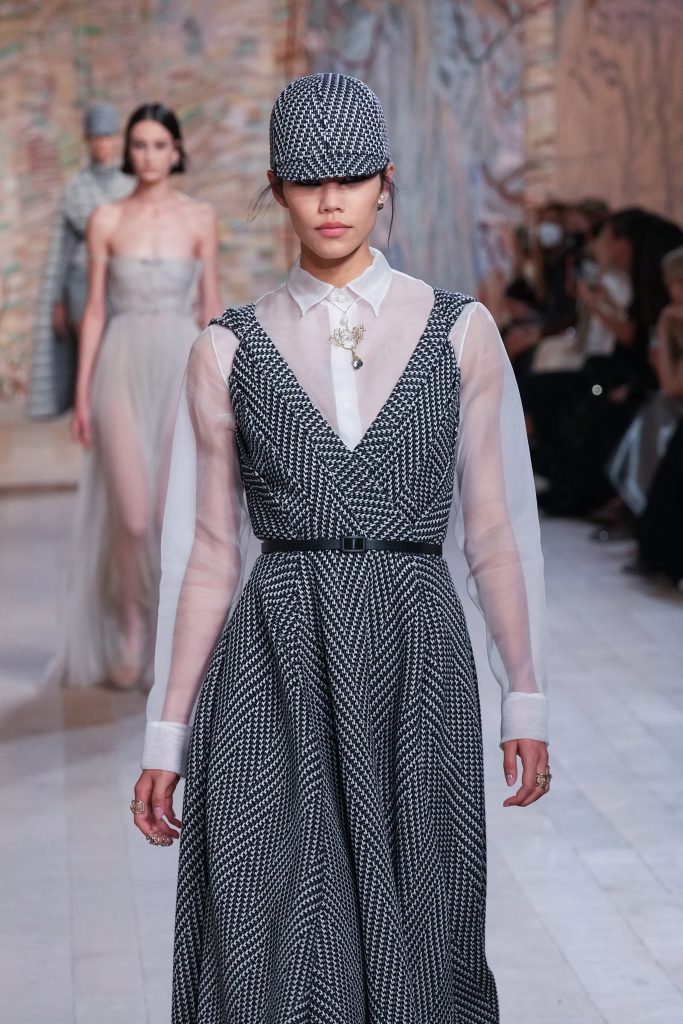 For the first time since the global pandemic began, brands were able to host their shows in real life. As a result there was plenty of excitement, beginning with Jean Paul Gaultier’s special collaboration with Chitose Abe, the Artistic Director of the Japanese brand Sacai. These type of designer collabs aren’t new and you can’t help wonder if they weren’t inspired by the music industry who have been engaging in this type of  ‘talent/co-marketing’ for years, such as Micheal Jackson + Paul McCartney, Nelly + Tim McGraw, Rihanna + Eminem and Lil NAS X + Billy Ray. It’s a great way to broaden the fan base. 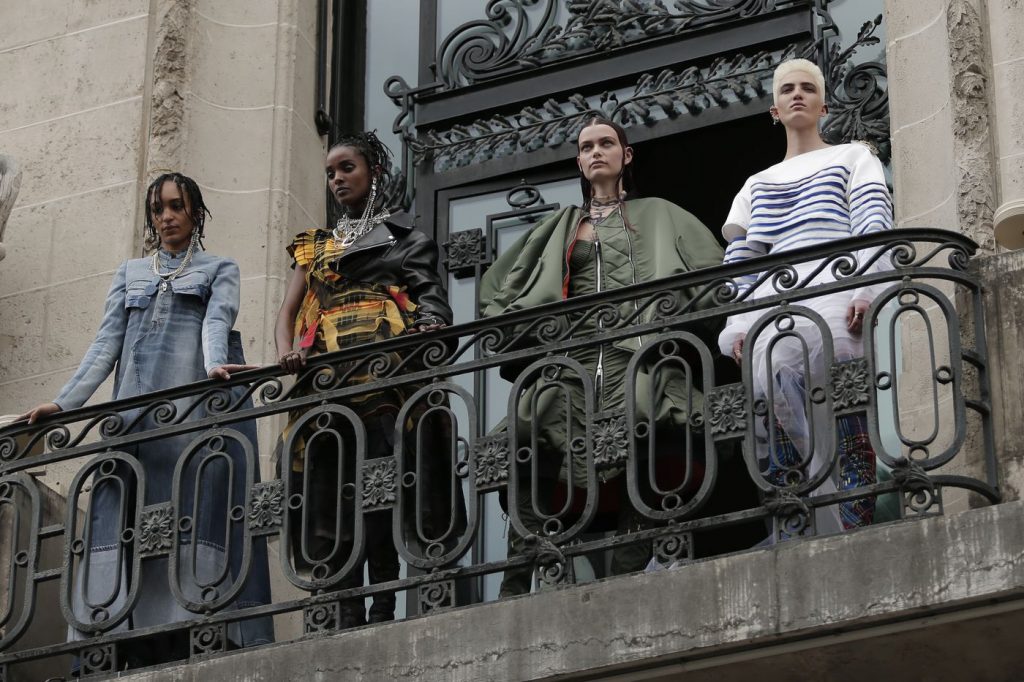 Models appear on a balcony at Jean-Paul Gaultier’s fashion house after the presentation of his Haute Couture Fall 2021 collection. (Photo Credit: Lewis Joly for AP)

Another anticipated show of this couture season was the welcoming of Pyer Moss to the calendar. The brand’s creative director Kerby Jean-Raymond, is the first Black American fashion designer to be welcomed into the couture fold. Jean-Raymond was officially invited by the Chambre Syndicale de la Haute Couture (sadly, the outdoor show was postponed due to the Hurricane Elsa), but the runway extravaganza took place on Saturday in Flatbush, Brooklyn. The show was a fabulous lesson in black invention, black joy and black revolution. 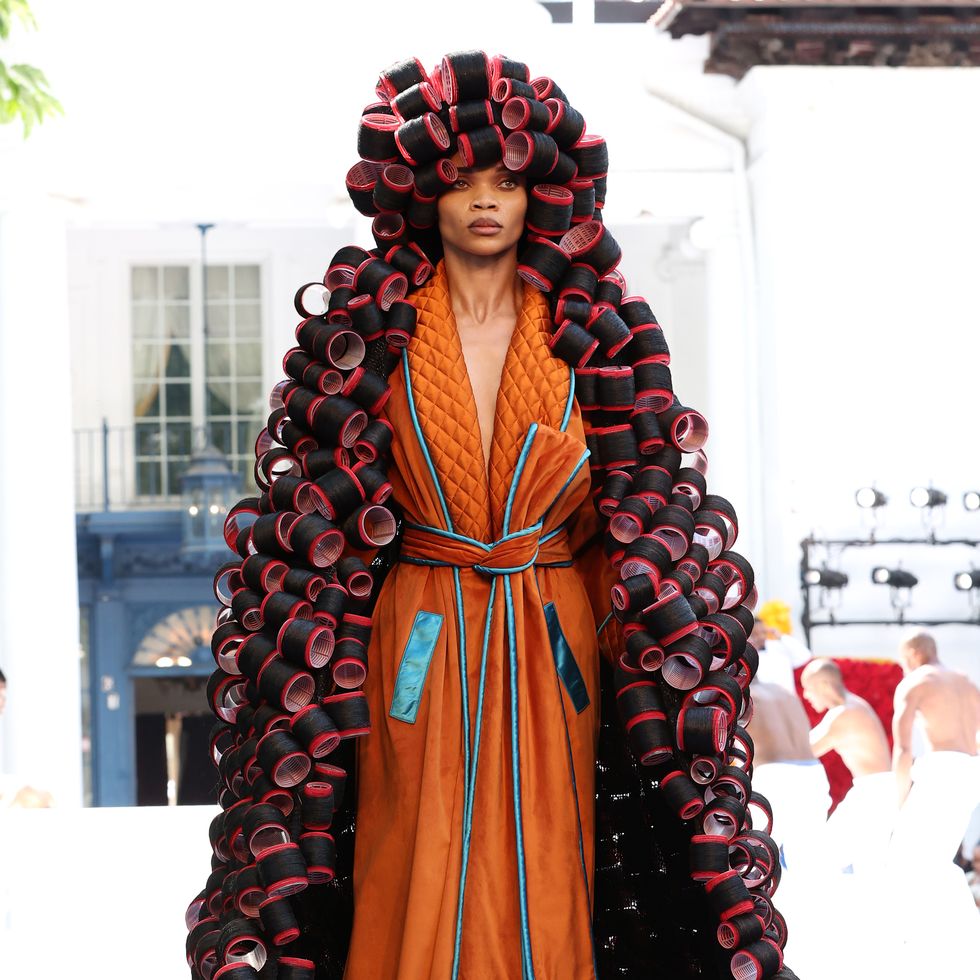 Fashionistas were also anxiously waiting the return of Balenciaga Couture under the helm of Demna Gvasalia. Gvasalia surprised his audience when he chose Ella Emhoff, 21-year-old daughter of U.S.’s Second Gentleman, Doug Emhoff, and budding Bushwick fashion designer and model, to walk his runway. 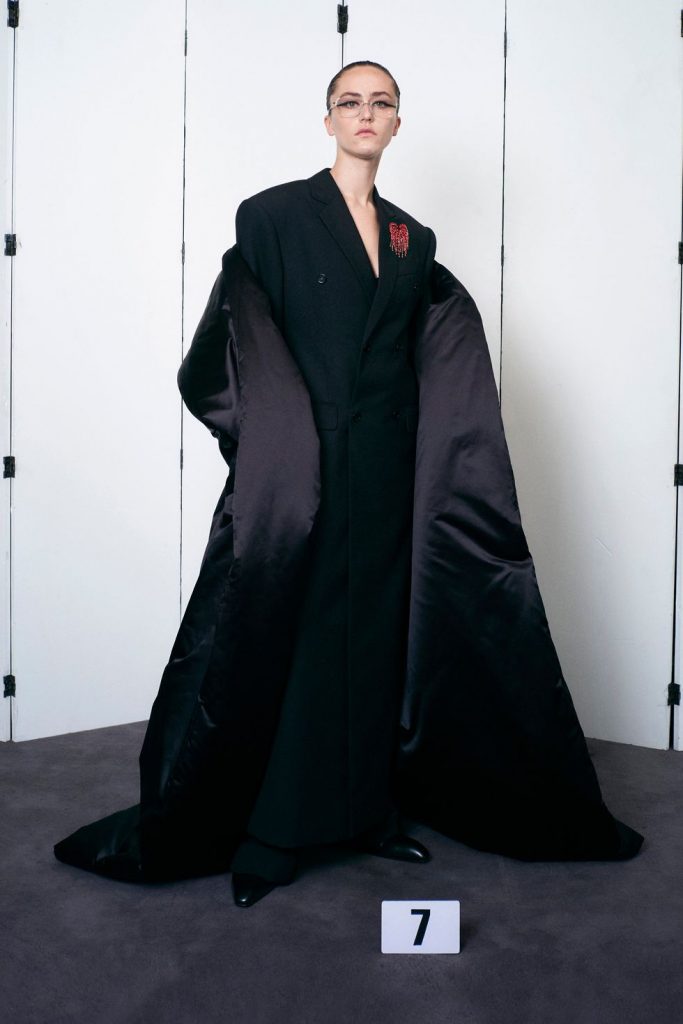 Below, are some of the highlights of most anticipated collections from the haute couture fall 2021 season:

It has been 53 years since the house of Balenciaga presented an haute couture collection, so the anticipation was at an all-time high for followers of the fashion-forward label. Demna Gvasalia showcased his first couture collection at Cristóbal Balenciaga’s original couture salon, which today is fully restored to the original version. Aside from press and couture clients, Kanye West and Bella Hadid were seated in the much sought-after front row.

The collection was a balanced combination of men’s and women’s made-to-measure pieces, and paid tribute to Balenciaga’s respected couture history with a slew of direct references to the house’s founder, case-in-point, the initials ‘C.B.’ were hand-embroidered on silk ties, poplin shirts, and leather gloves. Another heritage look was included in the grand finale; a veiled bridal look which was inspired by one of Cristóbal Balenciaga’s creations, last shown 54 years ago.

Right before COVID-19 brought the world to a halt, the elusive designer Jean Paul Gaultier announced that he would be collaborating with Chitose Abe of Sacai for his fall 2021 couture collection. This genius collaboration will be part of a new and exciting tactic where Jean Paul Gaultier will team-up with a different designer each season. The outcome was met with great success.

This was Chitose Abe’s first time working in the world of couture and she brought her unique and avant garde aesthetic into Gaultier’s archives, breathing new life into some of his most iconic looks. Case-in-point, a corseted trench coat-inspired dress.

Kim Jones’ second couture collection for Fendi was presented through a beautiful fashion film directed by Luca Guadagnino. The film starred supermodel Kate Moss and was a celebration of “the eternal beauty of Rome”. The designer described the collection as “a contemporary connection between eras, cultures and aesthetics“.

“Connecting eras, a meeting of the old with the new, the past with the present. The eternal beauty of Rome and its composite history are the protagonists of this haute couture show,” Fendi said.” A collection where nothing is quite as it seems.

For his debut collection for Alaïa, Pieter Mulier – who is known for being Raf Simons’ right-hand man for years – presented a hybrid of couture and ready-to-wear. The collection paid homage to the house’s namesake designer and his original creations, but with a modern twist, turning the houses signature staples into something new and exciting.

The homage to the founder was a roll out of the houses signature pieces including body-sculpting knitwear, multi-strap corset belts, and hooded silhouettes. Mulier also transformed Alaïa staples like the white poplin shirt paired with his showstopping corsets, into his own translation of flowing tops cut away to reveal a triangle of solar plexus and were paired with bubble-hem maxi skirts or pleated minis.

Nine of the looks — including the cutaway tops — were couture, while most of the collection was ready to wear. Although Mulier presented during couture fashion week, the newly minted creative director prefers the two collections co-exist side by side as women might wear it, “without rules or boundaries“.

“For two years, I’ve been saying that I didn’t care about nostalgia,” creative director Daniel Roseberry said ahead of the reveal of Schiaparelli’s new couture collection in an interview with Harper’s Bazaar. “This season, though, it’s where it all started. I found myself wondering, again and again: What if you combined a little Manet; a little Lacroix; a little 1980s; a little 1880s; a little matador; a little space alien; a little Ingres; a little shimmer; a lot of colour? Could I do it? And what would it look like? The answer is this, my fourth couture collection, ‘The Matador’.”

With his haute couture collection – which was presented in a video and lookbook format– Roseberry wanted to pay tribute to the house’s founder, and to celebrate the history, the beauty and the joy of fashion.

The young American couturier for Schiaparelli is the first American designer to hold the helm at a French couture house and is known for creating Surrealist fashion for the modern era.

“Here’s what I want: No more cookie-cutter fashion,” he added in his show notes. “No more pieces that look like they could have been made by anyone. No more cynicism. No more irony. No more timidity. No more coolness. Give me more beauty, more earnestness, more romance, more effort. I hope this collection reminds everyone who encounters it of the sheer delight that fashion can bring us in hard times, and with it, the promise of more joy when the clouds part. Give me more fashion. Give me more hope.”

So tell us, what was your favorite couture collection?

Spring is in the air and as the temperatures heat up, so do the fashion trends. Here is a look at the top ten fashion trends that millennials will embrace for spring and beyond.

Diana Vreeland once said “pink is the navy blue of India” and this spring designers from New York to Paris have embraced the femininely sweet shade. But don’t be fooled, although the hue is chock-full-of-saccharine, these looks are anything but girlie. The color palette runs the gamut from soft pastel tones to bold vibrant shades and can be found on everything from chic dresses and suits to the “It Bag” of the moment. 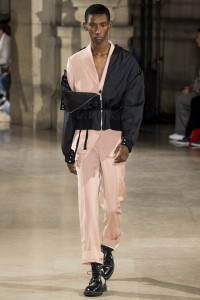 Forget logomania. Millennials are embracing statement tees as they take a political stance against the unjust. In a throwback to Katharine Hamnett’s political slogan tees of the late 80’s and early 90’s, today’s variety can already be found all over Instagram and on celebrity “It Girls”.  From Christian Dior’s “We Should All Be Feminists” version to Sacai’s “Horror Show” motto, these tees are already street-style approved. 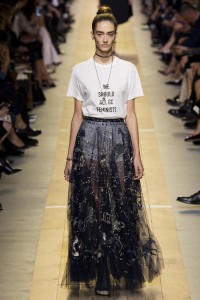 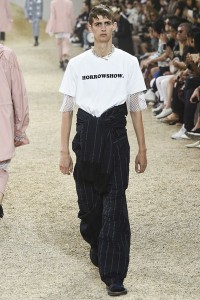 Millennials are creatures of comfort as they continue to embrace the athleisure trend. Oversized Vetements sweatshirts were street-style approved this past fashion week and were worn by every fashion “It-Girl and Boy” proving this trend has staying power. 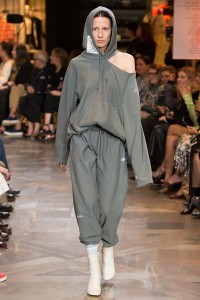 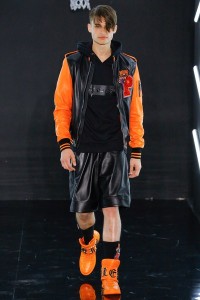 These stripes are not for the board room. For spring, designers are focusing on graphic, striped patterns that can be found on cool separates for day or night. These bold looks are selfie approved by fashionistas on both sides of the Atlantic. 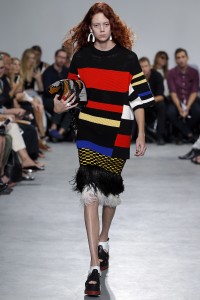 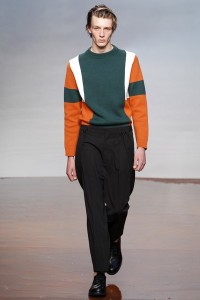 Who doesn’t love denim? Denim is the uniform for millennials, but for spring, the durable fabric is anything but basic. There are so many choices in the denim market from mom jeans to skinny; to wide-leg to cut-offs; anything goes. Celebrities and models off duty have also taken to wearing intricate embellished denim from day to night. 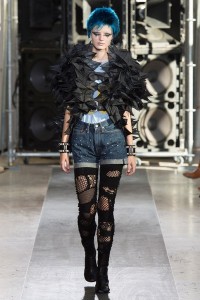 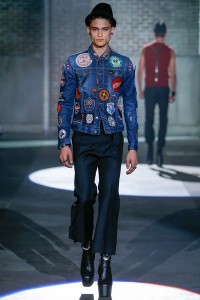 Everyone loves a good throwback, and for spring, designers are looking to the Eighties for inspiration. From Gucci’s one shouldered ruffled number to Balmain’s electric blue suit; these bold looks are dramatic and daring. 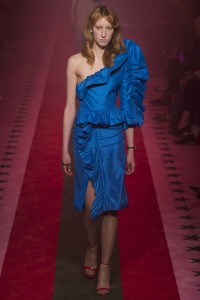 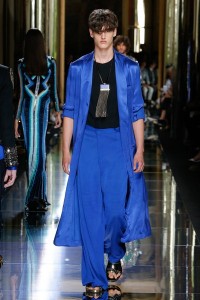 It’s become the uniform trend for millennials as military inspired and utility pockets are all the rage. For spring, the trend gets a chic update from  Marc Jacob’s flirty take on camouflage to Dries Van Noten’s urban outerwear– these looks have plenty of charm. 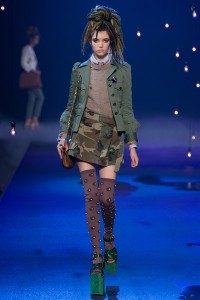 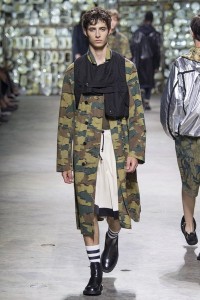 Inner-wear as outerwear is all the rage as designers look to the boudoir for inspiration. Touches of lingerie references can be found on flirty bra tops, seductive slipdresses and sexy briefs. 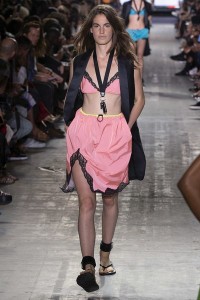 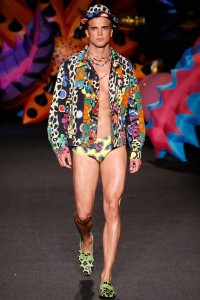 You’re so transparent. Designers are making a case for sheer clothing as the transparent trend continues to go strong for spring thanks to celebrities like Kim Kardashian who wears the trend with such confidence and bravado. 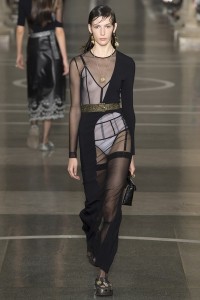 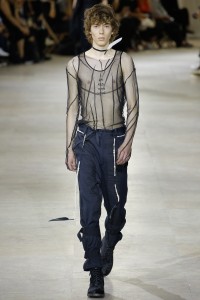 This year has been the year of great outerwear, from cool embroidered bombers to oversized puffers. For spring, the trend continues with Balenciaga’s bright puffer vest as well as quirky silk bombers. 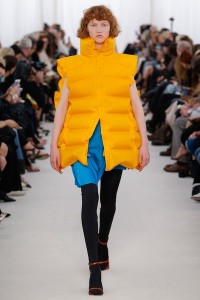 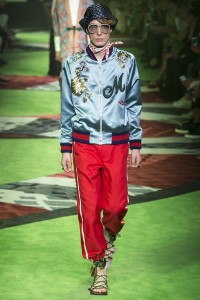