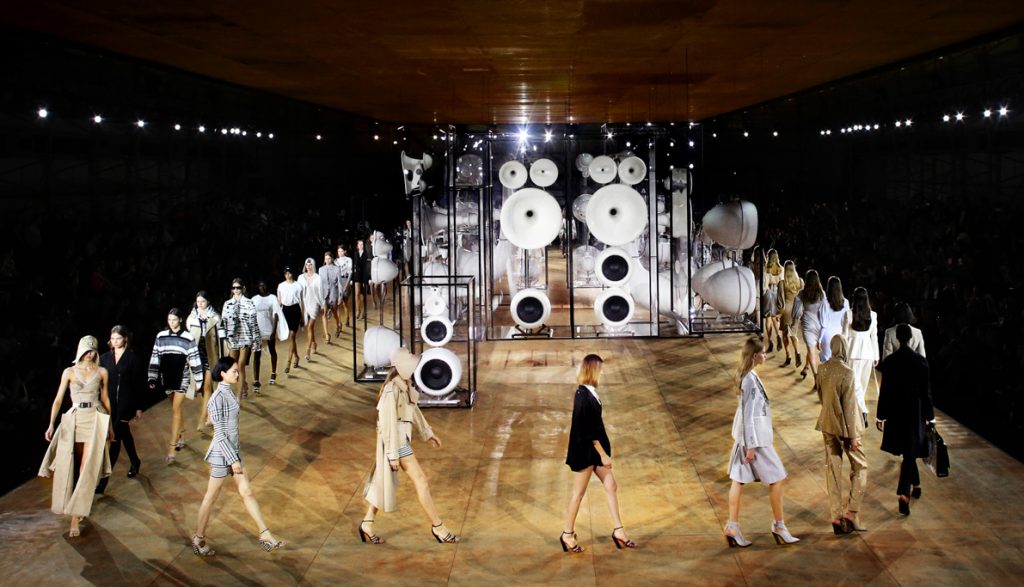 The excitement of S/S2020 fashion month got off to a great start with New York being praised not only for its joyful and uplifting collections, but also for nurturing new talent. The trend continued in London and Milan. London, whose fashion industry has a long history of embracing young designers, once again didn’t disappoint and the underlying message (thanks to pioneer Stella McCartney), was loud and clear: climate change and sustainable design. Sure there were veteran brands like Simone Rocha, Erdem, Victoria Beckham and Riccardo Tisci’s Burberry show, which were star-studded extravaganzas, but youth-activated British creativity was front and center, with a cadre of emerging designers who will surely become street style favorites. 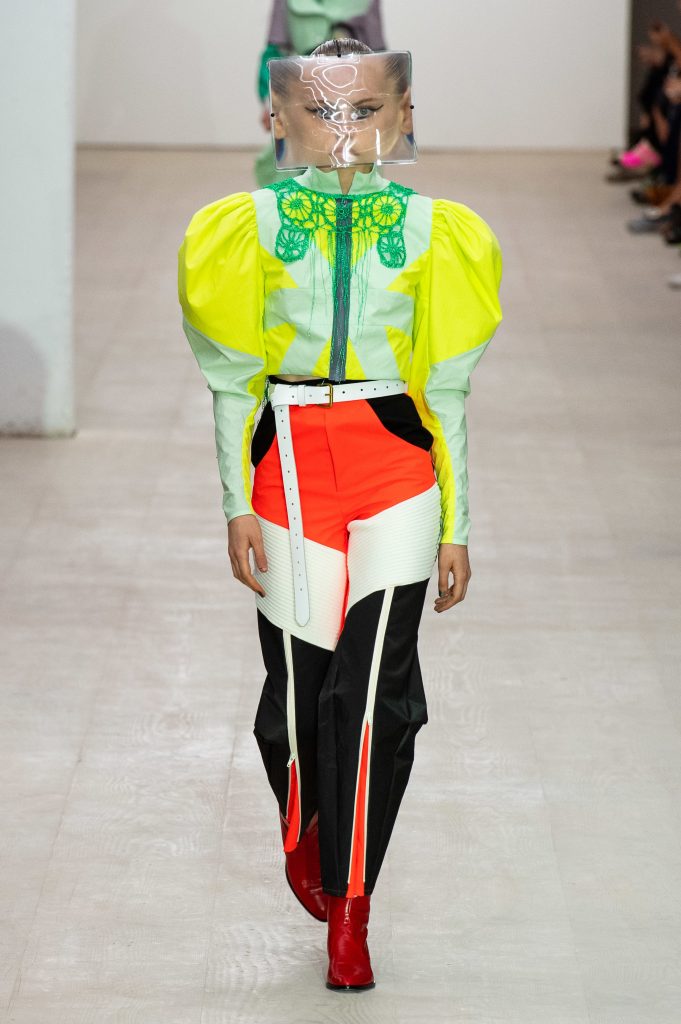 Matty Bovan presented his first fashion show in September 2016 and has quickly become a fashion darling. Known for his apocalyptic scenarios that reflect the troubling political climate around the world, for spring, he brought us deeper into his catastrophic settings with a collection titled Hope and Fear.

The first model, as well as several others, walked out wearing rectangular lenses fixed on their heads; the device was used to magnify their faces until they looked computer-generated and inhuman, mission accomplished!

As for the clothes themselves, they were charming with a home-made craft appeal. Bovan’s collection was an eclectic mix of motocross trousers, Liberty florals, flight suits and hospital scrubs – all in vibrant hues.

After all, in these agonizing times, what good is fashion if it’s not a fanciful escape from reality? 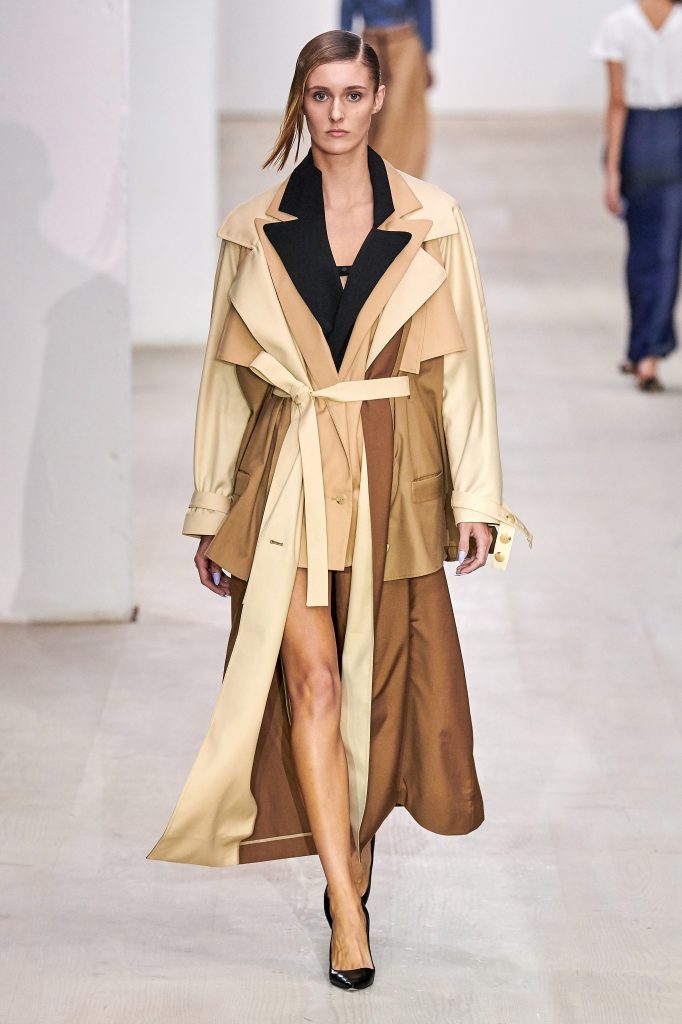 In the age of Brexit and #MeToo, British designers are using the runway to get their message across, and for Marta Jakubowski her message was loud and clear. In her show notes, the feminist designer was inspired by a strong woman striding out with “determination in her step.”

The collection was an ode to the style icon Marlene Dietrich, the glamorous actress who looked stunning in gowns and equally elegant in menswear-inspired suits. For her spring 2020 collection, Jakubowski created power-shouldered suits and multi-draped tailored outerwear that were smart and chic. The young designer also offered lessons in layering with skirt over pant looks, as well as blazers piled over and under trench coats.

For evening, Jakubowski created a few simple, yet fashion-forward draped gowns in various shades of purple, as well as a sophisticated white tuxedo coatdress – perfect evening looks for “It-Girls” everywhere. 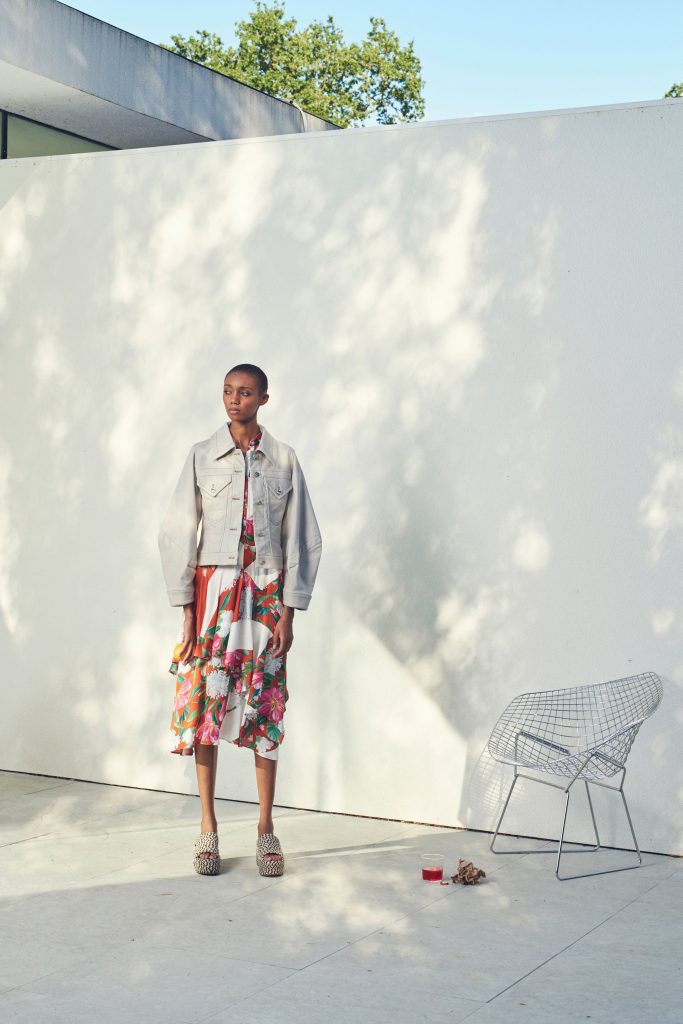 The reoccurring political turmoil theme among the emerging designer set in London was endemic. The label Palmer Harding was no exception, as the label’s designers, Levi Palmer and Matthew Harding stated, “There is a lot of balance between optimism and pessimism, working to find a balance between not being naive about all the troubling uncertainties of now and not allowing them to jam you up.”

Luckily for the duo, the clothes themselves were not as bleak as their inspiration – dilapidated Soviet-era Russian bus stops. This inspiration translated into architecturally inspired looks with innovative folds and pleating details, most notably on crisp white shirts.

The designers also played with optimistic prints and colors that were influenced by William Eggleston’s photography, best known for his play of vivid hues against mundane subjects.

There was a nod to a red, white and blue color story with a cool twist on the notion of classic Americana, as well as a khaki denim jacket with beaten bottle-top buttons that could be thrown over just about anything. 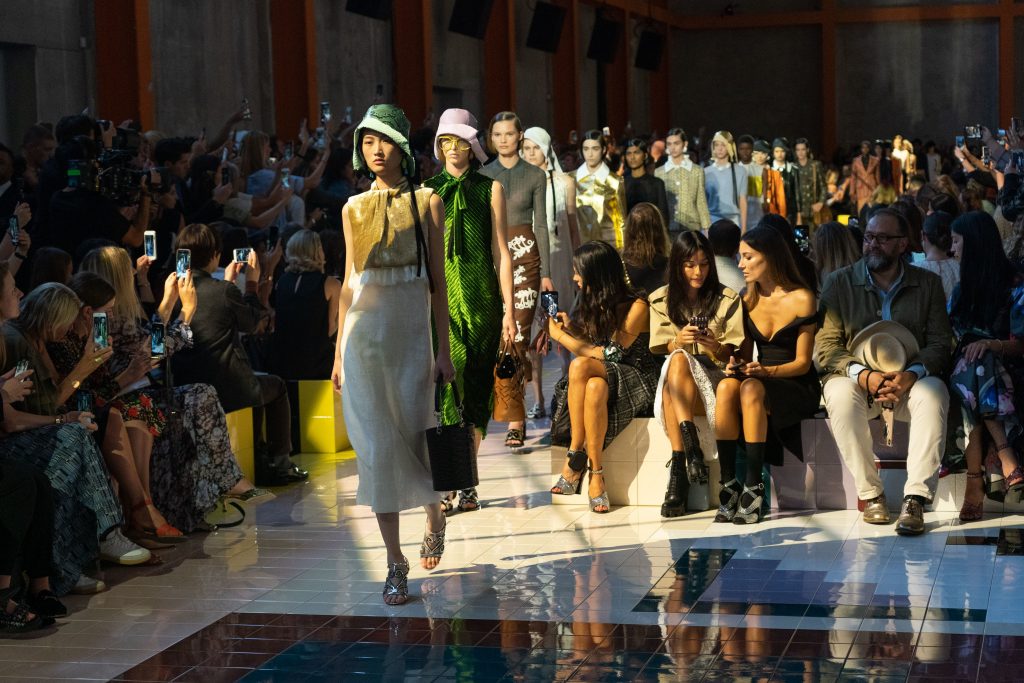 Next stop on the fashion month whirlwind was Milan; where of course, leave it to Miuccia Prada, to kick off the week with an understated elegance that was Prada at its best. But while The National Chamber of Italian Fashion heavily champions Italy’s established designers, this season there were a few emerging designers that are breaking down the barriers.

Fashion runs through his blood! Efisio Marras, the son of the whimsical designer Antonio Marras, presented his label, I’m Isola Marras, and it was absolutely delightful. The young designer was inspired by Diana Ross and Warhol’s muse Edie Sedgwick. According to Marras, “They were both groundbreaking personalities in their own right. They both broke social and racial barriers: Edie was an upper-class girl meddling with the Factory’s downtown artsy milieu; Diana became a superstar despite the social hostility towards her black heritage.”

The light-hearted and spirited collection was filled with Warhol-inspired, oversized floral prints in bright hues that made their way on everything from maxi dresses to minis. Marras also showed his sport side, creating sweatshirts and hoodies with brocade details for a feminine touch. These charming looks are perfect for young women who want to show off their flirty side. 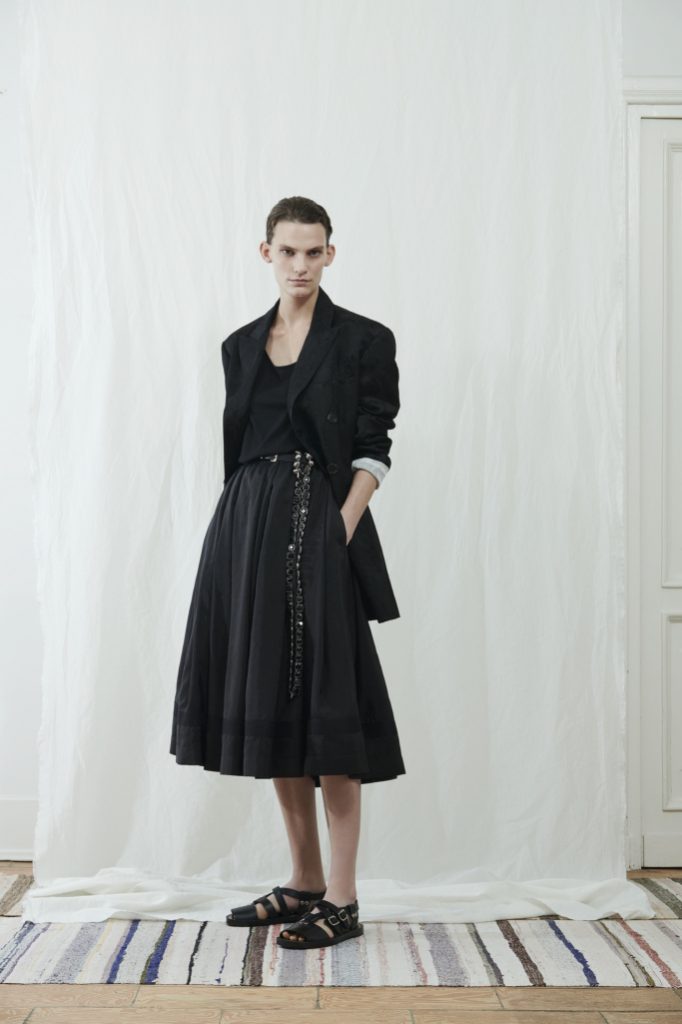 It’s easy for young designers to get caught up in growing their businesses too quickly, but not Marco Zanini. He plans to expand his business slowly, focusing on real clothes that are beautifully made for his namesake label Zanini. The young designer stated, “I need to focus on quality, to show something I believe in.”

Zanini starts with the fabric, as all the textiles he used were specifically developed for him, and ends with all the little details that make his collection stand out. Key looks ranged from a black cotton shirtdress with white buttons,  white topstitching and ribbons at the hem; trapeze dresses with plissé accents at the shoulders; effortless smock dresses; and perfectly slouchy blazers and outerwear that every modern girl will want in their wardrobe rotation.

These were real clothes for real life but with a cool girl attitude. 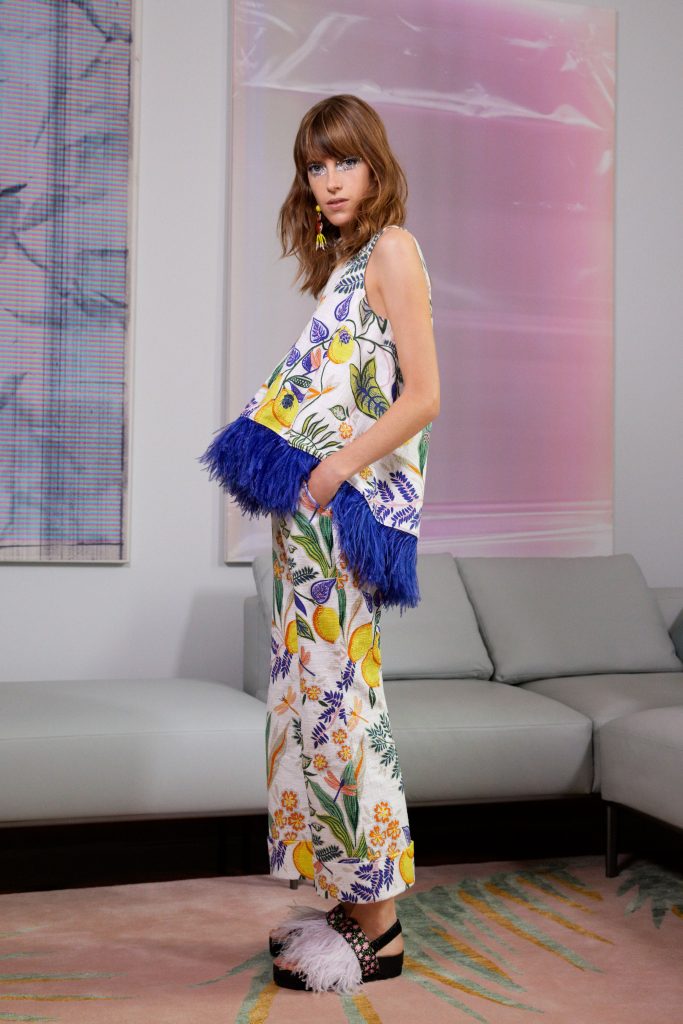 JJ Martin launched her label La DoubleJ for the fall 2018 season, but the writer-turned-designer has already established a strong brand identity. Martin is known for her playful and flirty retro prints and vibrant use of colors on everything from dresses and swimsuits to separates and homeware. Her prints are sourced from vintage fabrics and wallpapers, but her collection is all produced in Italy with the highest level of craftsmanship.

For spring 2020, Martin did not disappoint. She built on the silhouettes that worked best for her last season and expanded them further this season. There were charming tent-like shapes in dresses and tops, while her swimwear collection has grown into one-shouldered and long sleeve styles. The young designer also began incorporating new fabrics into her collection, such as Sangallo lace (which was over-printed of course), feathers and paillettes.

The designer also worked on a shoe collaboration this season with Fabrizio Vito, bringing her playful prints and feathers to sandals and clogs. The vignette, which was held in a garden at the Four Seasons Hotel in Milan, also featured La DoubleJ pillows, which were exquisite additions to her beloved prints.

Who can ever forget the 2000 Grammy Awards when Jennifer Lopez showed up in a plunging , green leaf print Versace dress. Donatella Versace could have never imagined the publicity that moment would get, literally causing so many searches on Google that the company had to create Google Images. No, this is not a joke.

The dress went viral before viral was a thing. Fast forward to almost 20 years later and the genius Versace created a sexier version of the iconic dress, and who else would she have strut down the runway in this sizzling number, no other than Jennifer Lopez.  The star literally brought down the house as she closed the show and caused a frenzy that literally broke the Internet. 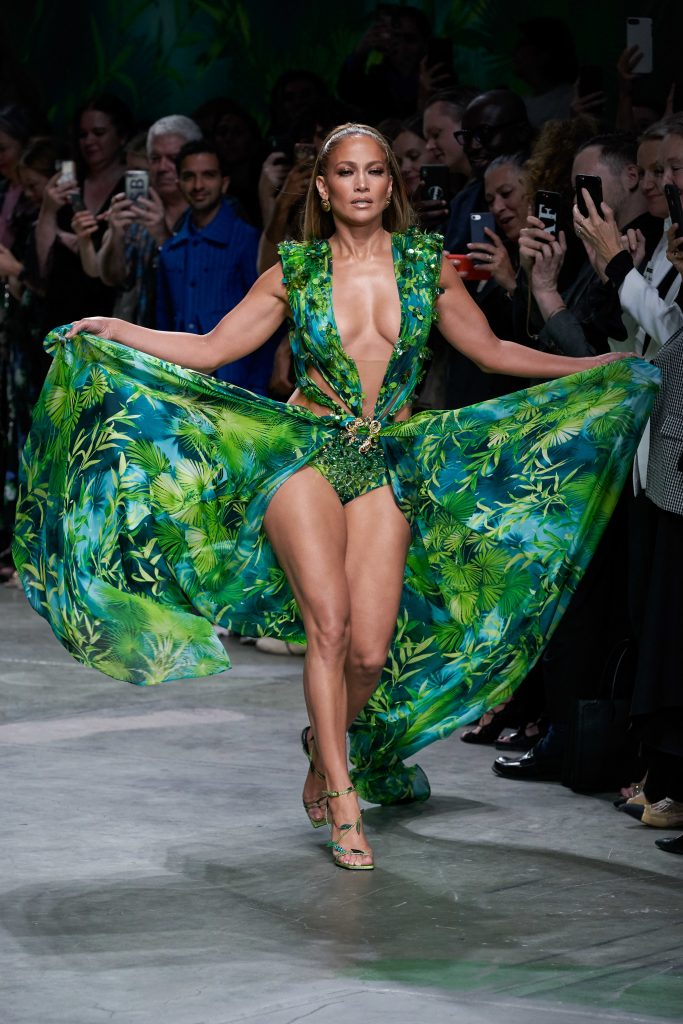 Jennifer Lopez brings down the house at the Versace spring 2020 show in a sexier version of the leaf print dress she wore to the Grammy’s 20 years earlier.

FOR ALL OF YOU ASPIRING AND EMERGING DESIGNERS, THESE ARE REALLY EXCITING TIMES. WHILE THE WORLD MAY BE SEEM TO BE IN CHAOS, THIS IS THE TIME TO TAKE ADVANTAGE OF SOME UNIQUE OPPORTUNITIES. WHETHER YOUR DESIGN PASSION IS FOCUSED ON WOMEN’S RIGHTS, GENDER EQUALITY, CLIMATE CHANGE, SLOW FASHION, SUSTAINABLE DESIGN OR ALL THE ABOVE, THE FASHION COMMUNITY IS READY FOR YOU AND YOUR MESSAGE.

At The University of Fashion we love promoting young designers, so tell us, who are your fav up-and-coming designers?