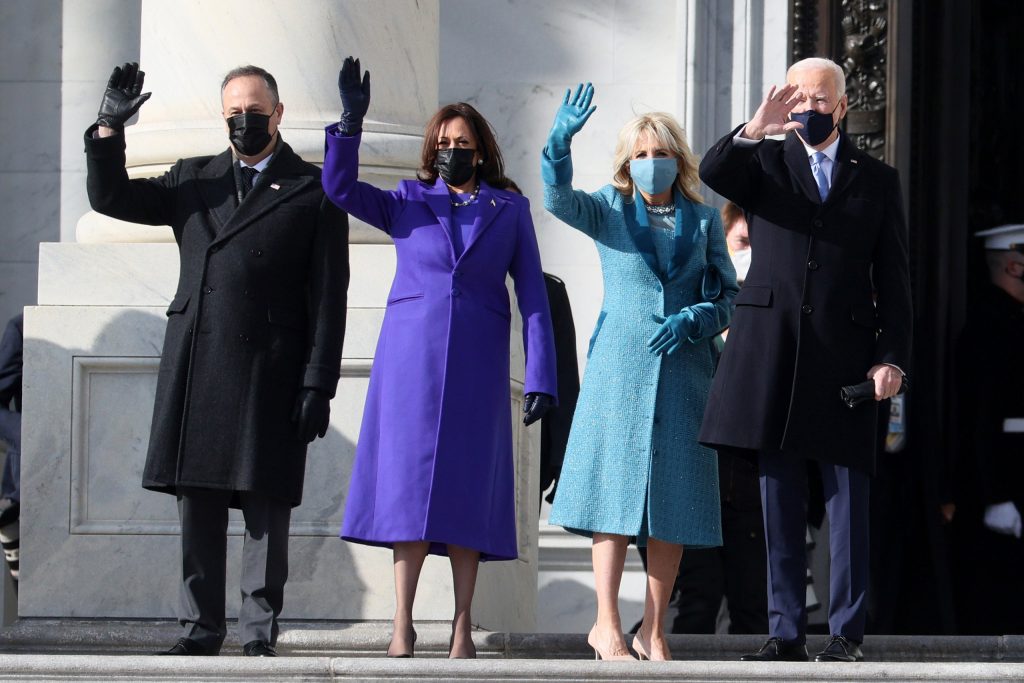 U.S. President Joe Biden and Vice President Kamala Harris just completed their first weeks in office. While the dynamic duo has already brought about plenty of positive changes, they also amped-up the fashion quotient in D.C. Thanks to First Lady Dr. Jill Biden and VP Kamala Harris, and finally, American young designers are once again at the forefront of the world fashion stage. 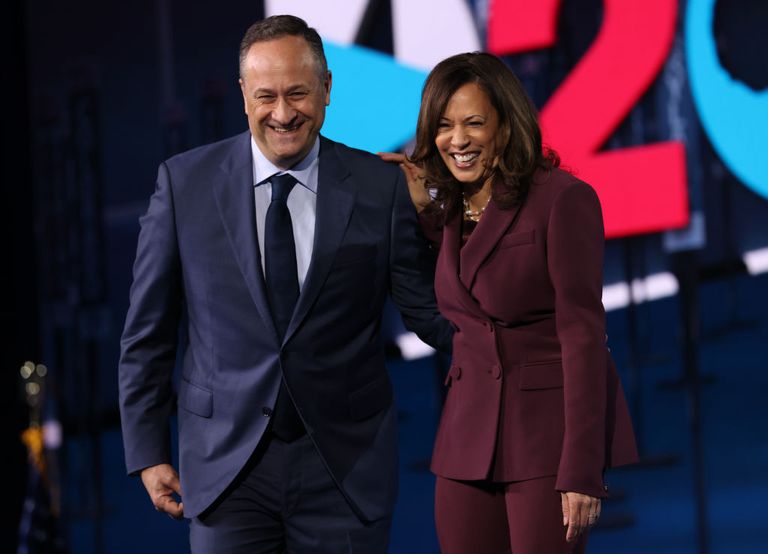 Doug Emhoff and Kamala Harris, in Altuzarra, as she accepted the nomination for the vice presidency at the Democratic National Convention. (Photo Credit: Win Mcnamee for Getty Images)

Thankfully, this will all change as the United States moves into a new era of leadership, all eyes will be on Vice President Harris to see what subtle statements she will make with her wardrobe choices. Throughout the campaign trail, Kamala Harris’ wardrobe remained consistent: a business-ready pantsuit or blazer worn with jeans; her shoe choices were also limited to her signature Converse sneakers or a classic pointed-toe pump. The VP also consistently wore her beloved accessory, a string of pearls, a sentimental tribute to her Alpha Kappa Alpha sorority at Howard University. Kamala Harris has broken down many barriers as she is the first female, Black, and South Asian-American Vice President of the United States. 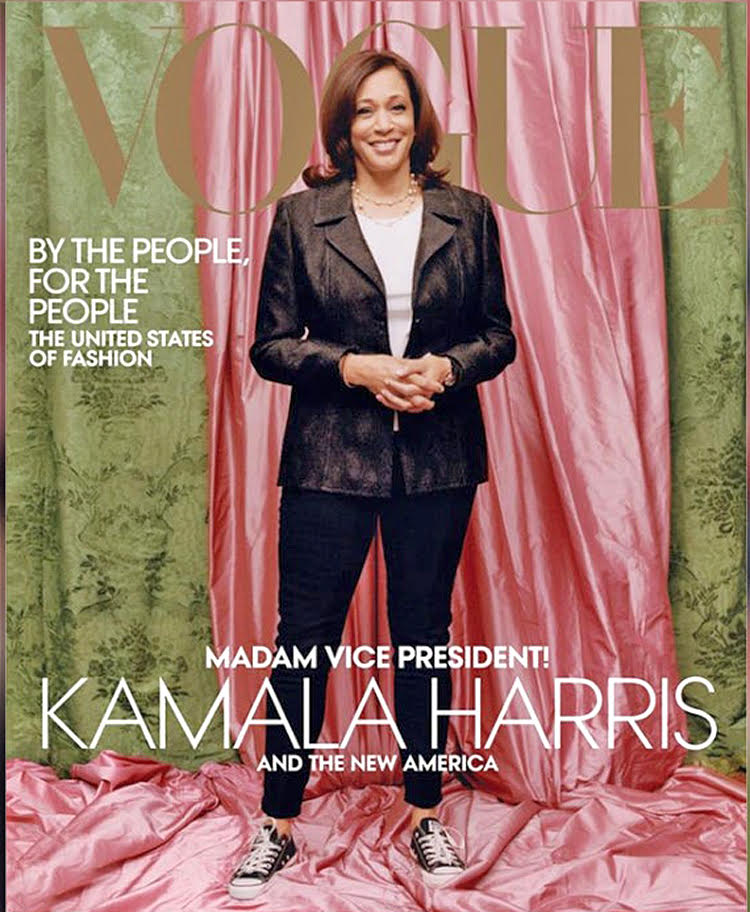 VP Harris’ style has evolved greatly since the early days of her campaign trail. She has even graced the covers of prestigious fashion magazines, including Elle in November 2020 and the Vogue February 2021 cover that stirred up plenty of controversy involving the most powerful woman in fashion and the most powerful woman in the White House. Social media ran ramped with many accusing the Vogue cover as being “disrespectful”, but Ann Wintour originally described the cover as “joyful, casual, and accessible.”

On the print Vogue cover the VP is dressed in a dark brown jacket by Donald Deal, narrow black jeans, a white t-shirt, her signature Irene Neuwirth pearl necklaces, and trusty Converse sneakers. But the second Vogue cover which was digital, featured a closer-cropped photo of the VP wore a pale blue suit by Michael Kors. 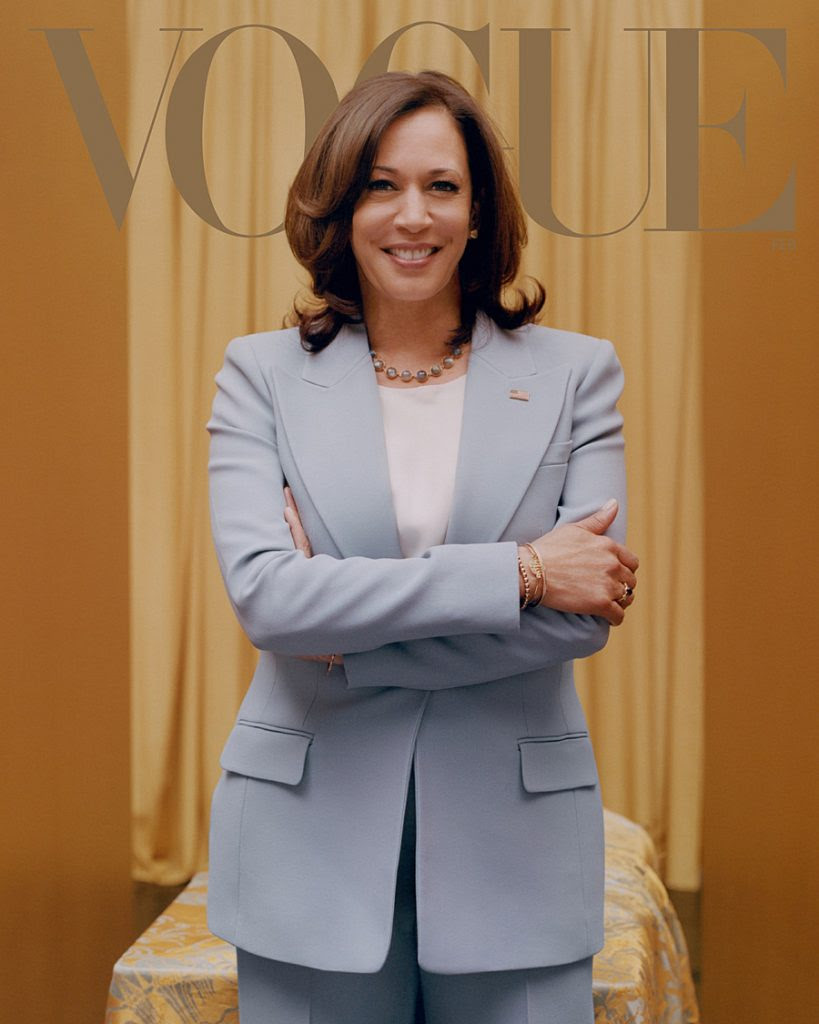 Many social media users argued that the Vice President should have been dresses more inspirational than casual.  When Kamala appeared on the cover of “Elle” in November, they captured her strength, warmth, intelligence, and beauty. She looked completely Vice Presidential. Sad that Vogue did not achieve those results in such a momentous moment in American history. 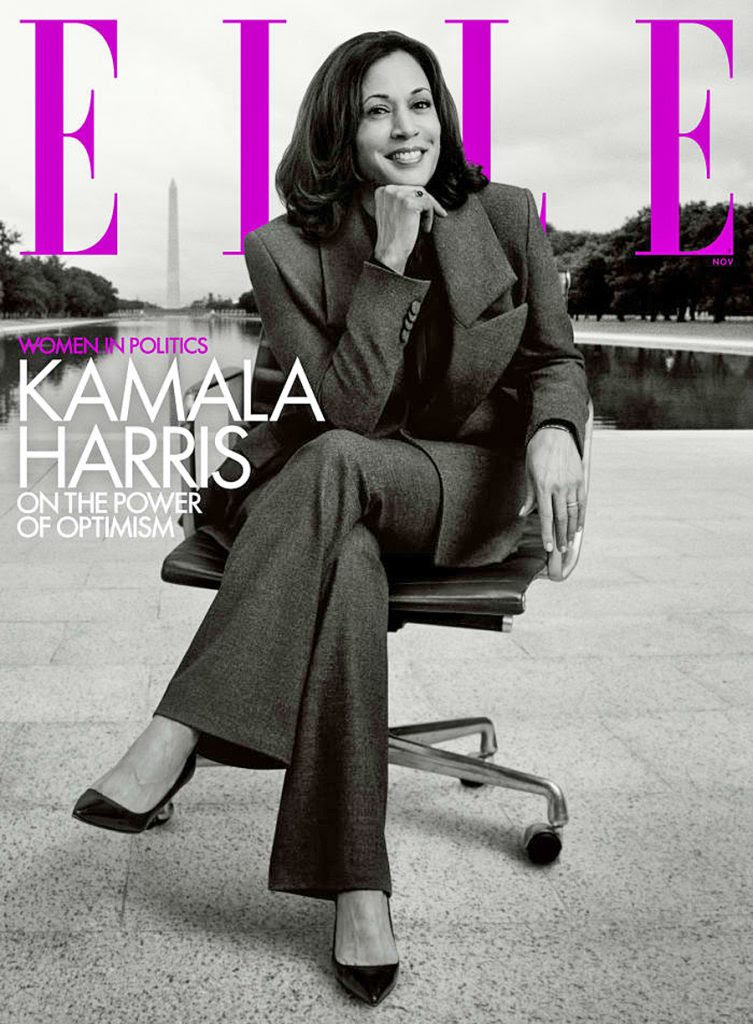 According to Sway, people familiar with the matter on both sides said that there had been no contractual cover approval agreement in place, the cover image was not what the vice president’s team had expected. The day after the first photo leaked, a second — more formal — digital exclusive cover was also released. Ms. Wintour said in a follow-up statement to Sway, “Obviously we have heard and understood the reaction to the print cover and I just want to reiterate that it was absolutely not our intention to, in any way, diminish the importance of the vice president-elect’s incredible victory.” In an exclusive interview on this episode of “Sway,” Ms. Wintour discusses the magazine cover, diversity concerns at Condé Nast, the future of the fashion industry. 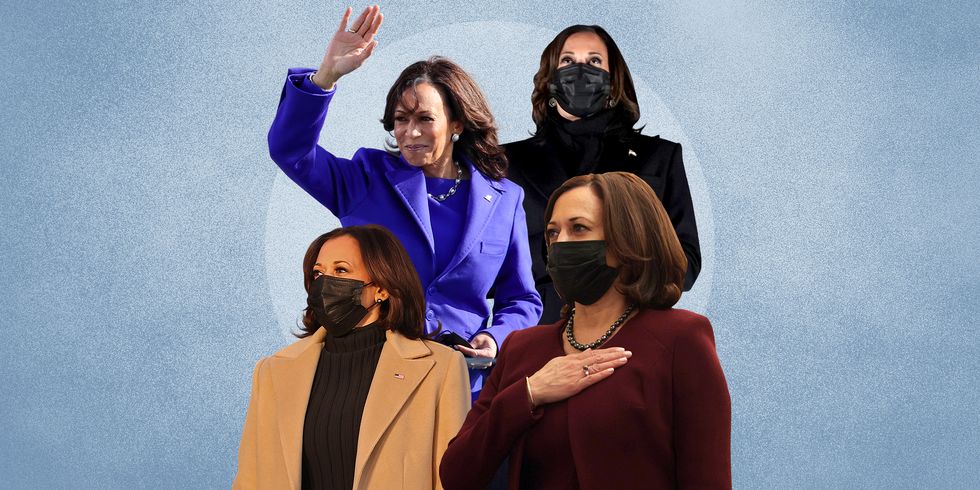 Through the years as a senator in California and on the campaign trail, VP Kamala Harris shied away from fashion. Her uniform consisted of muted pantsuits, blazers, skinny jeans, and her signature Converse sneakers and pearl necklaces. Her sartorial choices were meant to blend into the background while she fought for political change and policies that were dear to her heart. 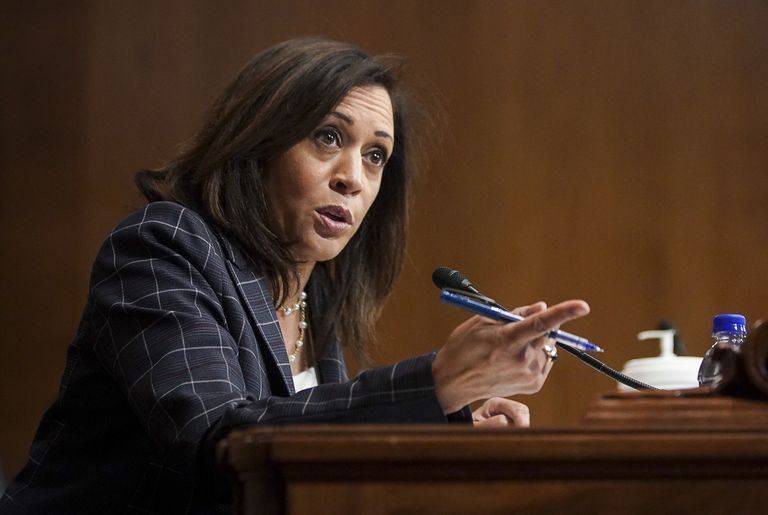 But once Biden chose her as her running mate, Kamala Harris’ style began to evolve. For starters, Vice President Harris began to collaborate with Hollywood stylist Karla Welch, who is especially known for the perfectly imperfect off-duty looks she creates for her clients, a diverse crew that includes Oprah Winfrey, Justin Bieber, Karlie Kloss, Tracee Ellis Ross, and even Anita Hill. According to Town & Country, “Harris and Welch’s professional partnership is something of a secret—kinda open, kinda not. And neither camp returned emails requesting confirmation.”

During inauguration week, VP Harris’ sartorial choices where on point and rich with meaning, the most powerful woman in the United States wore looks create by designers of color, including Sergio Hudson, Prabal Gurung, Pyer Moss’s Kerby Jean-Raymond and Christopher John Rogers, whose brilliant purple coat and dress was accessorized with pearls by Puerto Rican designer Wilfredo Rosado on the day she was sworn in as Vice President of the U.S.

In a Town & Country interview with Robin Givhan, the only journalist to receive a Pulitzer Prize for fashion criticism, and who is now the Washington Post’s senior critic-at-large, chronicling politics, race and the arts stated, “On one hand, Harris’s clothes are straightforward and professional, especially while she was on the campaign trail. She looks like she could be walking into any major law firm, any Fortune 500 company. But I think there’s also this sort of inability to not discuss her clothes because of the historical nature of her position.”

Fashion is a way for people to get a little slice of Harris’s life and symbolism for themselves. It’s aspirational fashion in a new way. “I also just sort of worry to some degree that we are muddling the line between Vice President and First Lady,” says Givhan.

A First Lady she is not, but she is a first of so many achievements—first woman, first woman of color, first woman of South Asian descent, first daughter of immigrants to hold the office of vice president. So as the most powerful woman of the United States, should the public scrutinize over her sartorial choices? Naturally, her policies and what she does for the nation comes first, but there is nothing wrong with adding a little panache along the way. 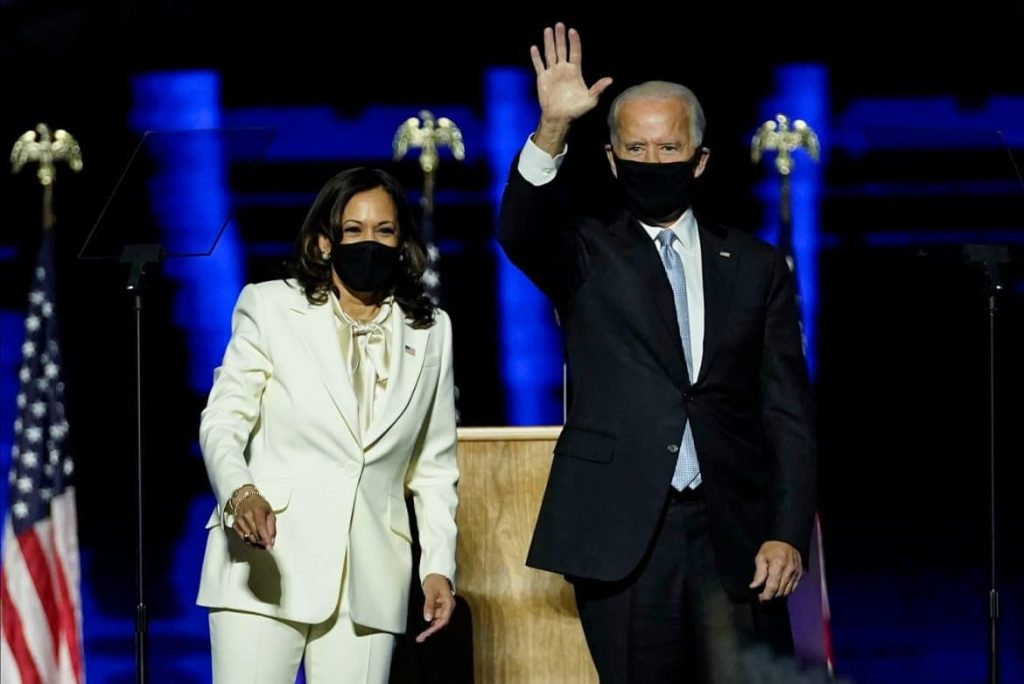 Her rise to fashion stardom began in November, the night she took the stage alongside President Joe Biden and they accepted their victory as the newly elected President and Vice President of the United States. VP Harris carefully selected a creamy Carolina Herrera pantsuit and white silk pussy bow blouse, a nod to the suffragist movement, this look was analyzed across every form of media and many approved the look as it stood for how far women have come and she embodied power and beauty in her suit.  The public is watching what VP Harris wears so closely that there is already a useful website, WhatKamalaWore.com, by the journalist Susan E. Kelley, who also curates similar sites about Meghan Markle and Kate Middleton’s sartorial choices.

“I don’t think she needs to make a stand verbally, but I do think there are going to be expectations of her in her position as a woman,” says Peju Famojure, a stylist and fashion consultant who has styled Solange Knowles and consulted with Beyoncé in a Town & Country interview. “There are always expectations tied into women’s fashion choices. People would be happy to see her support brands that are made in America, but also Black-owned brands, giving them representation, not only from a visual standpoint, but also helping to drive monetary success.”

While VP Harris will want people to focus on her politics and not her clothes, as a history-making public figure, her sartorial choices are a part of the picture that many will focus on. So far, Harris’ outfits have been a lesson in a new form of power dressing: her suits and pointed-toe pumps convey an authoritative mindset, while the more casual Converse and jeans signify a relatable casualness, accessible and familiar to the average American. 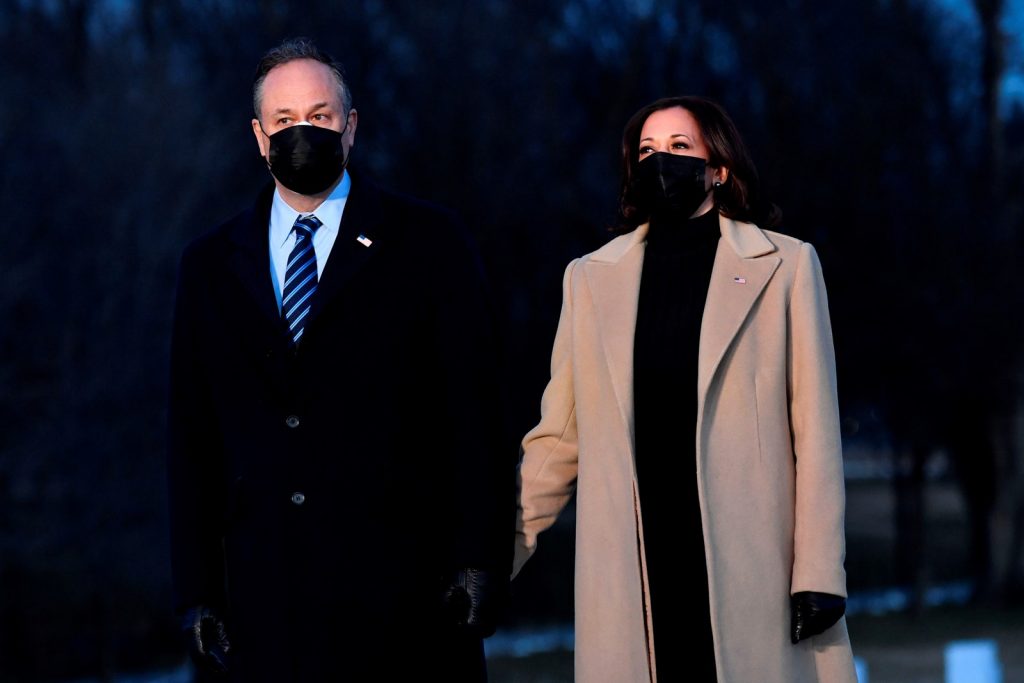 On January 19th, the eve before the historic inauguration, President Joe Biden and First Lady Dr. Jill Biden, along with Vice President Kamala Harris and her husband Doug Emhoff, gathered on the National Mall in Washington, D.C., for a COVID memorial honoring and remembering the more than 400,000 American lives lost to the pandemic so far.

Arranged along both sides of the Mall’s pool of reflection were hundreds of rectangles of light. “To heal we must remember. It’s hard sometimes to remember,” Biden said, “but that’s how we heal. It’s important to do that as a nation…Let us shine the lights in the darkness…and remember all whom we lost.” His words were followed by a moment of silence. While the moment was somber and full of sorrow, there was also a sense of hope.

There is no doubt that the Biden administration will set a completely different tone than the Trump administration, it will also be a breath of fresh air on the fashion front as First Lady Dr. Jill Biden and Vice President Kamala Harris have both been championing young American designers and their sartorial choices have been polished, sophisticated, empowering, and bold.  The VP opted to wear a chic camel cashmere coat by Kerby Jean-Raymond of Pyer Moss, which, appeared as a more traditional silhouette from the front, but the back turned revealed a curved shoulder seam that gave way to a flowing, pleated back. Kerby Jean-Raymond is a young Black designer who is likewise weaving purpose into his mission. On his runways, Jean-Raymond has addressed African American narratives in popular culture. In September of last year, he gathered PPE for hospital workers and provided $50,000 in grants for small businesses affected by the COVID crisis. 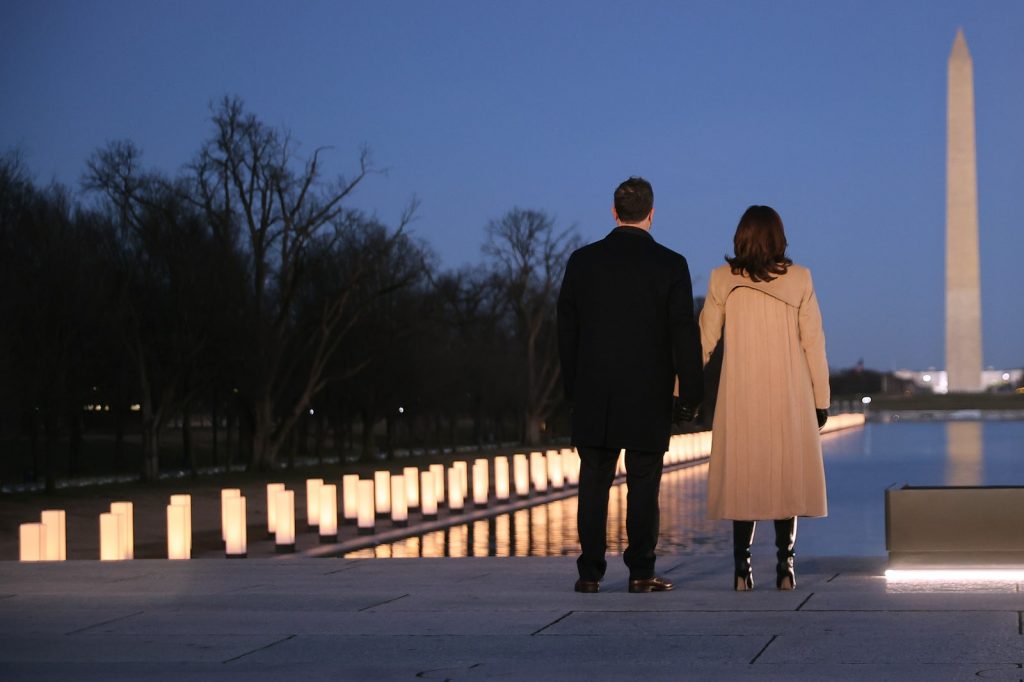 Harris also took to the podium the night of the COVID Memorial and said, “Tonight we grieve and begin healing together. Though we may be physically separated, we the American people are united in spirit. And my abiding hope, my abiding prayer, is that we emerge from this ordeal with a new wisdom: to cherish simple moments, to imagine new possibilities, and to open our hearts just a little bit more to one another.” 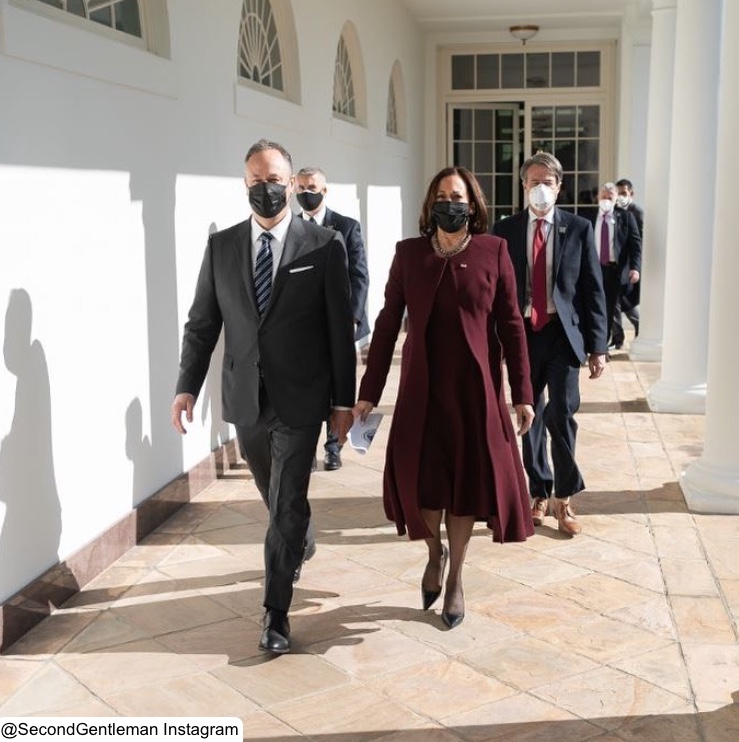 On January 20th, Inauguration Day, Vice President Kamala Harris began the day at a church service alongside President Biden and his family. Here she chose a look from Prabal Gurung, an American designer who was born in Singapore and grew up in Nepal. She looked stunning in a garnet-hued double-faced wool crepe dress with a matching coat. 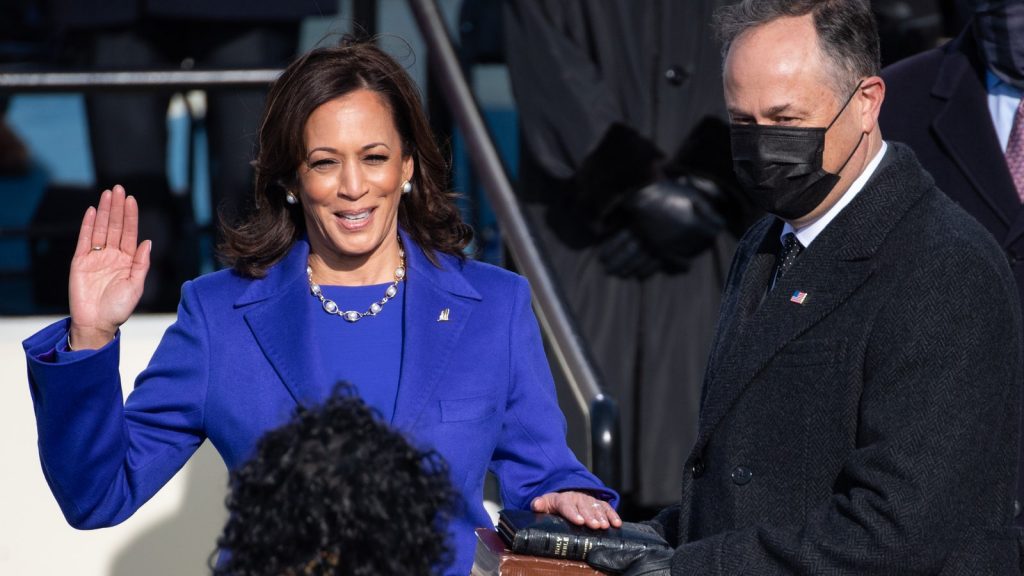 As Kamala Harris was sworn in as the Vice President, she wore a pearl necklace by Wilfredo Rosado. (Photo Credit: Getty Images)

Shortly after Kamala Harris was sworn in as the Vice President of the United States by Sonia Sotomayor, America’s first Latina Supreme Court justice. Our first female VP wore a stellar coat and dress by Christopher John Rogers, a young Black designer, who’s known for his love of bold and vibrant colors and shapes, as well as her signature strand of pearls. Her coat and dress were elegant and chic, while purple symbolizes strength, royalty, hope, and a call for unity at a time of political division; after all, when you mix blue (democrat) and red (republican) together, the color purple is created. A fitting chose for our Vice President. 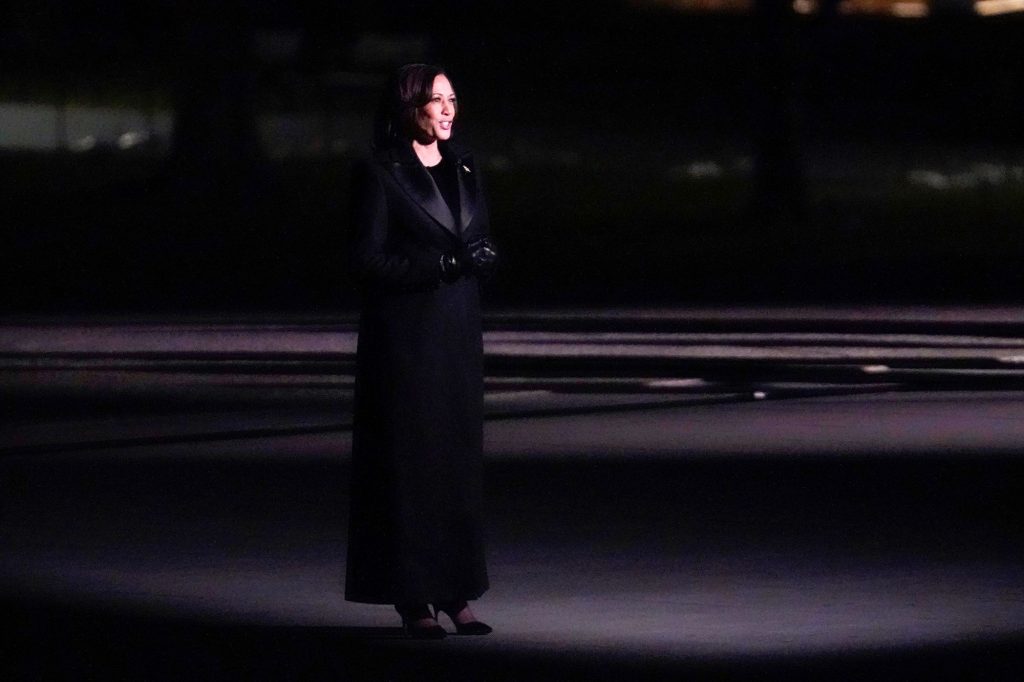 Later that night, at the Celebrating America event, Vice President Kamala Harris championed another young black designer, Sergio Hudson, as she wore an elegant liquid sequin cocktail dress with a floor-length silk tuxedo overcoat, both in inky black—and topped off the look with Irene Neuwirth earrings.

Since winning the election Vice President Kamala Harris’ fashion game has been strong, but we would love to see her step out of her comfort zone, but still be appropriate for her many meetings as VP.

So tell us, what looks would you like to see Vice President Kamala Harris wear?