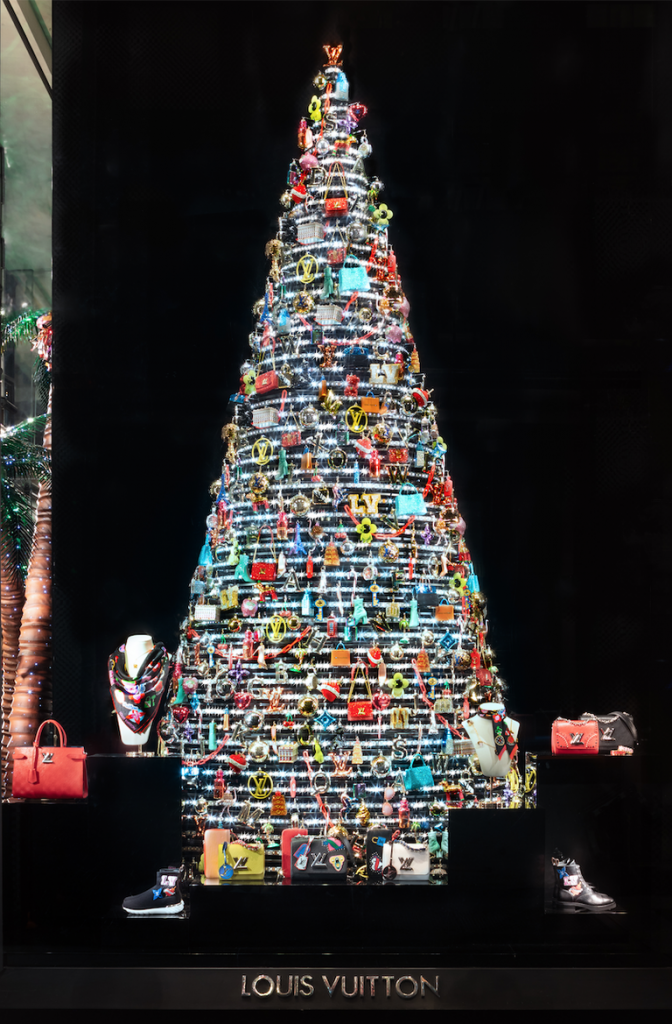 It’s the most wonderful time of the year…..the holiday season is a magical time when joyful cheer is celebrated and generosity for others is spread throughout the world. No matter what your religious beliefs, there is no denying that this season is filled with hope for a better tomorrow.  The holidays are also an opportunity for retailers and brands to end the year with high profit margins, as consumers shop for the perfect gifts family and friends.

The holiday season seems to be getting earlier and earlier. This year many retailers even officially kicked off the season by staying open on Thanksgiving! “Black Friday,” which is a public holiday in more than 20 states, presumably got it’s name from one of two theories: that the wheels of vehicles in heavy shopping traffic on the day after Thanksgiving Day left many black markings on the road surface. The other theory is that the term Black Friday comes from an old way of recording business accounts. Losses were recorded in red ink and profits in black ink. Many businesses, particularly small businesses, started making profits before Christmas especially on the Friday after Thanksgiving. “Cyber Monday” on the other hand, was first used in 2005 by the National Retail Federation (NRF), which needed a name for the flurry of online sales the Monday after Thanksgiving, since online merchants wanted the money that  brick-and-mortar stores were making on Black Friday.

But with today’s retail market being so saturated, and online shopping being so competitive, how do traditional brick-and-mortar retailers compete? The answer is simple, major department stores and retailers around the world lure customers in with their brilliant, spare-no-expense race for an exuberant gasp… holiday display windows, that have become a destination tourist attraction and in many cases a family tradition around the world!

Each store has their own unique style when it comes to their holiday windows. Macy’s and Lord & Taylor are known for their classic displays that delight Christmas shoppers and their children. Barneys New York is known for innovative and provocative displays, while Bergdorf Goodman and Saks Fifth Avenue are known for over-the top glitz. No matter what, these windows attract costumers, something that an eCommerce site can’t do.

The tradition of holiday window displays dates back to the Industrial Revolution, when in the late 1800s plate glass became readily available and allowed shop owners to build large, full length storefront windows to display merchandise. This was the birth of window shopping as we know it today.

It shouldn’t come as a surprise, but one of the first major holiday window displays was created by the Macy’s New York store in 1874, featuring a collection of porcelain dolls and scenes from Harriet Beecher Stowe’s book, Uncle Tom’s Cabin.

Children at the Macy’s toy window, ca. 1910 via The Library of Congress

In the early 1900s major retailers across the U.S. began competing with each other. Store owners and managers used window displays to lure window shoppers into their stores, and holiday displays became more colorful and creative. By 1937, department store owner, specifically Lord & Taylor, decorated their windows with gilded bells that swung in sync with the sounds of recorded bells. This was a  turning point for retailers, as each began to transition their holiday windows into magical fantasy experiences, as opposed to just showcasing merchandise.

From that point on, year after year, competition among major brick-and-mortar retailers intensifies, as online shopping increases. But it’s this magical time of year that consumers are lured into stores to view these masterful works of art.  The grander and more innovative the display, the more attention it receives and let’s face it…the more likes on social media is always a good thing!

Here is a fantastical journey of holiday window displays from across the globe. Each retailer had a clear and strategic message to attract their customers. 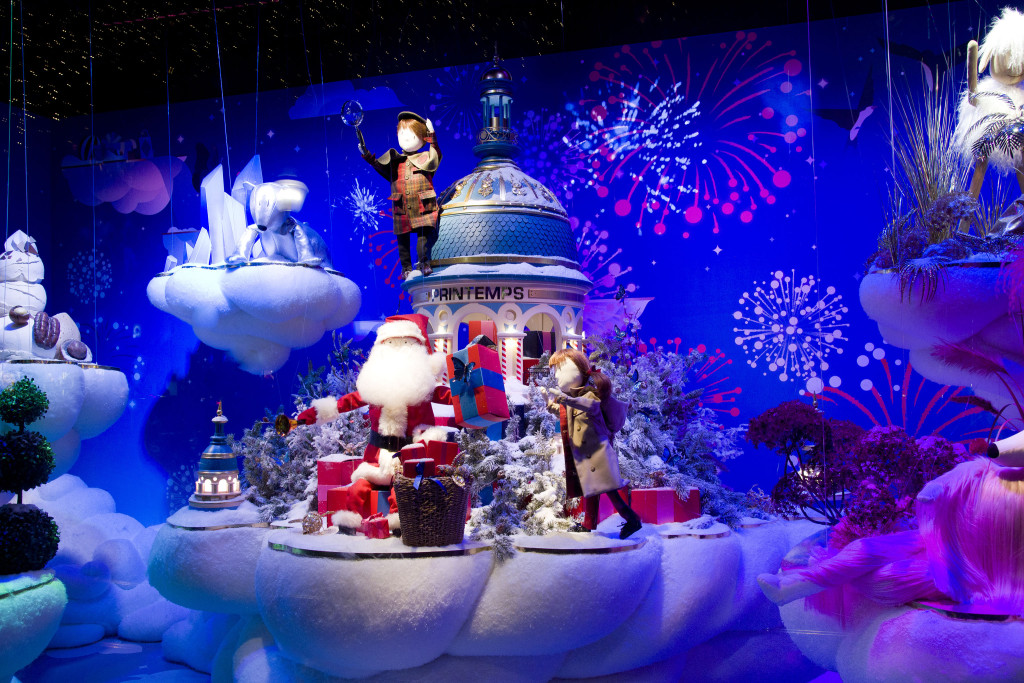 At Printemps, in Paris,  Jules and Violette, the retailer’s recurring holiday mascots, are sent on a hunt for Santa Claus visiting the desert, Antarctica, the bottom of the sea, and mushroom-and flower-covered terrain with flapping butterflies. 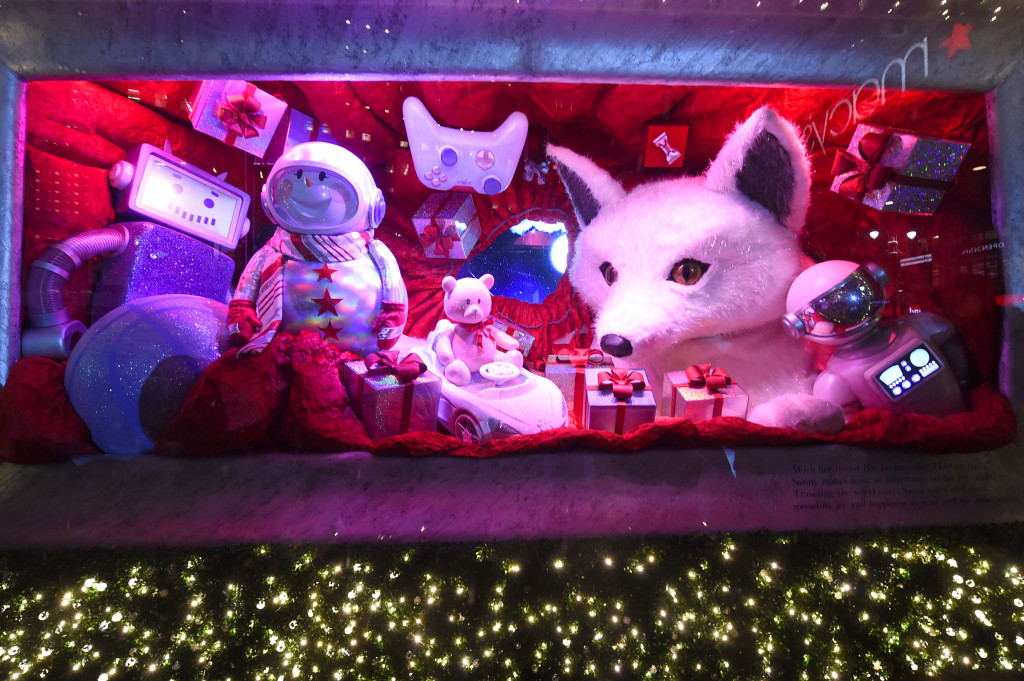 At Macy’s Herald Square in Manhattan, a tale of friendship, family, adventure and teamwork unfolds as Sunny the Snowpal works to save Christmas, befriending a fox along the way. 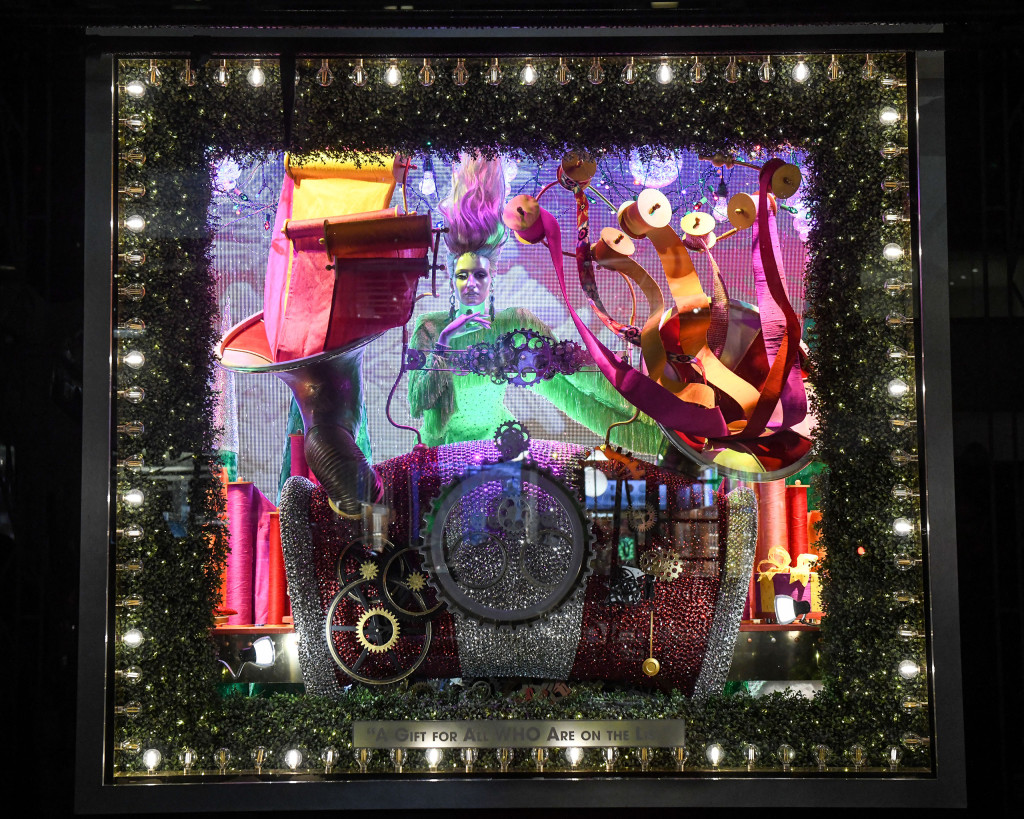 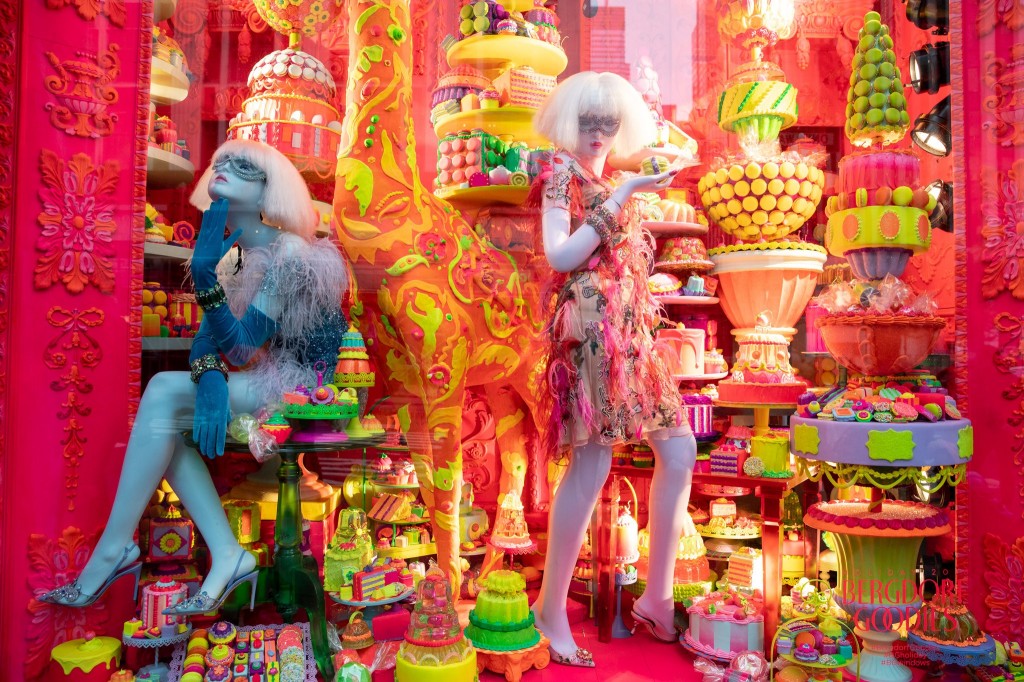 Bergdorf Goodman’s windows in NYC are a sugar-filled delight with everything from a gingerbread cuckoo clock, whose timekeeper is prone to wander from her enormous chalet, to a peppermint-hued dream featuring a candy cane wizard. 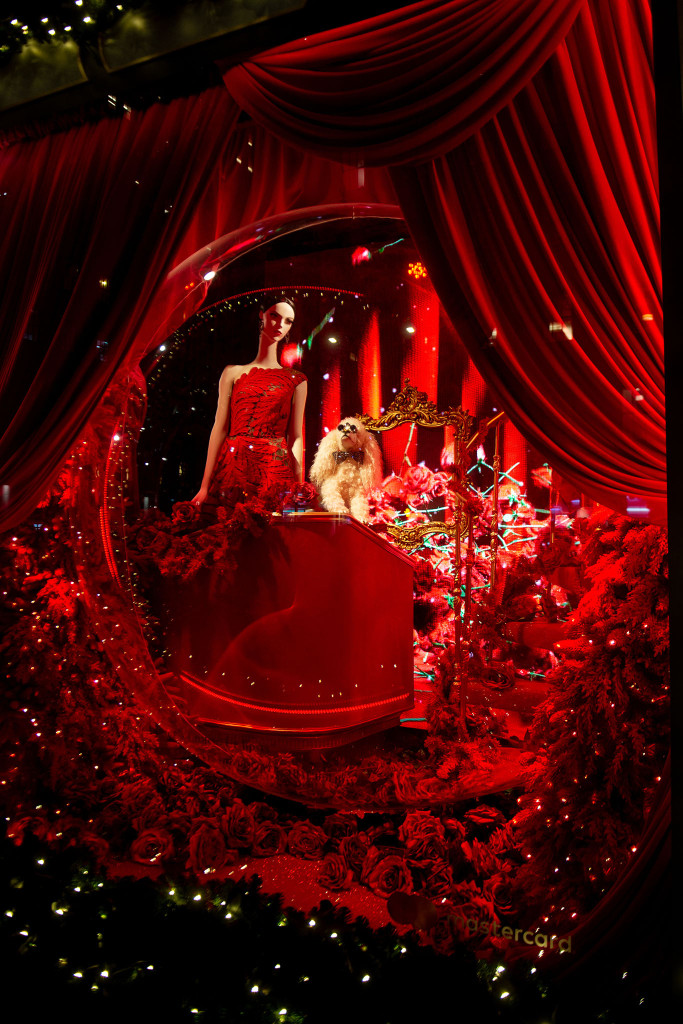 Saks Fifth Avenue’s NYC window portrays a fashionable shopper’s visit to the theater, where instead of watching the show, she dreams of the retailer in a whimsical fantasy. 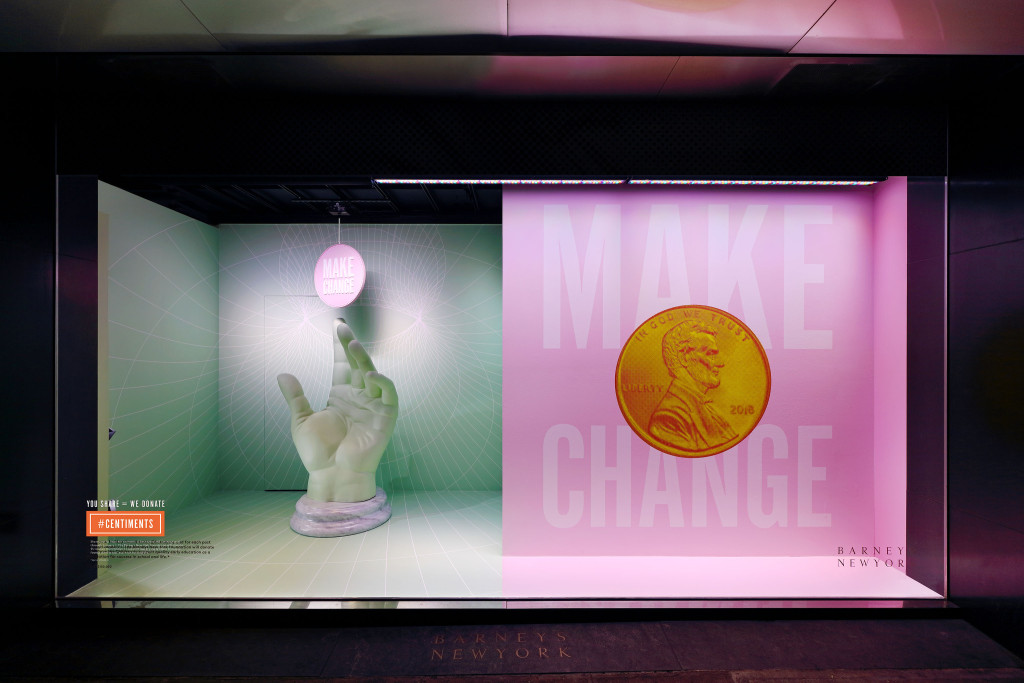 Barneys New York takes the penny to greater heights with its Making Change theme, presented by the Barneys New York Foundation. The campaign, in partnership with Save the Children, invites guests to create some currency during the holidays, including using the hashtag #centiments, which results in a $5 donation by the foundation to Save the Children for every post. Now that’s spreading holiday cheer! 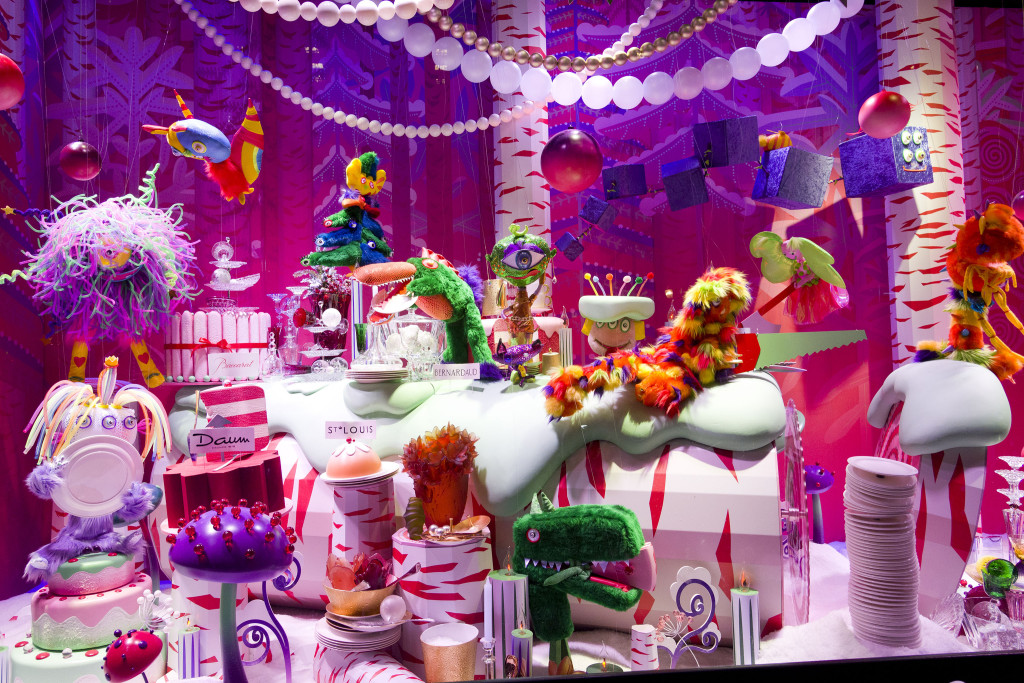 Galeries Lafayette in Paris envisions a “reverie with La fabrique des Rêves,” or manufacturer of dreams, featuring delightful characters imagined by children: furry dinosaurs and silly monsters in a playful and whimsical window is packed with toys and presents, plus seasonal pieces from the shop’s shoe and clothing collection. 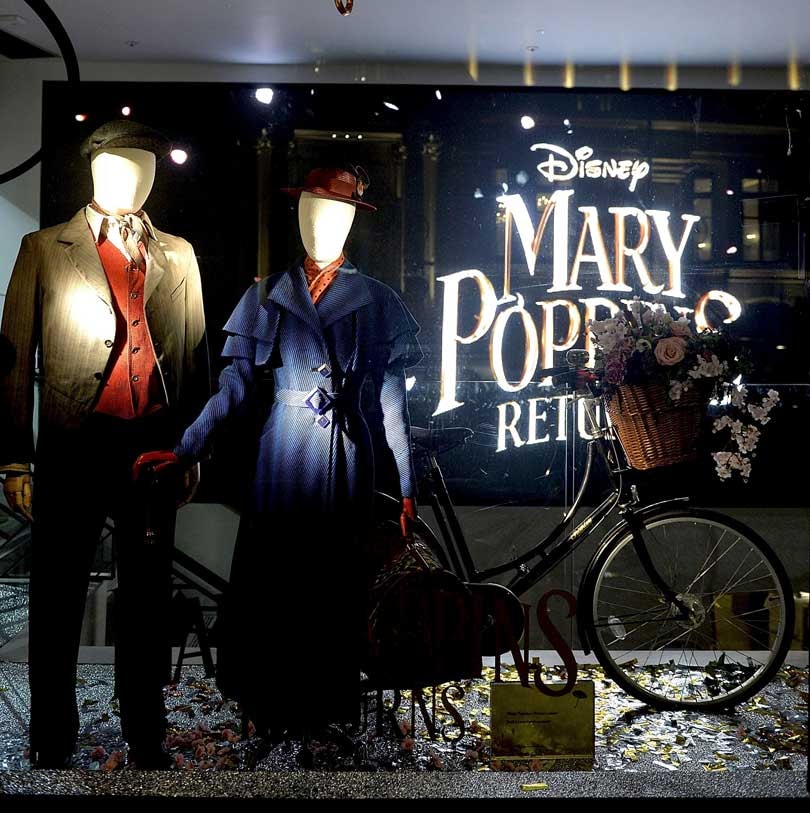 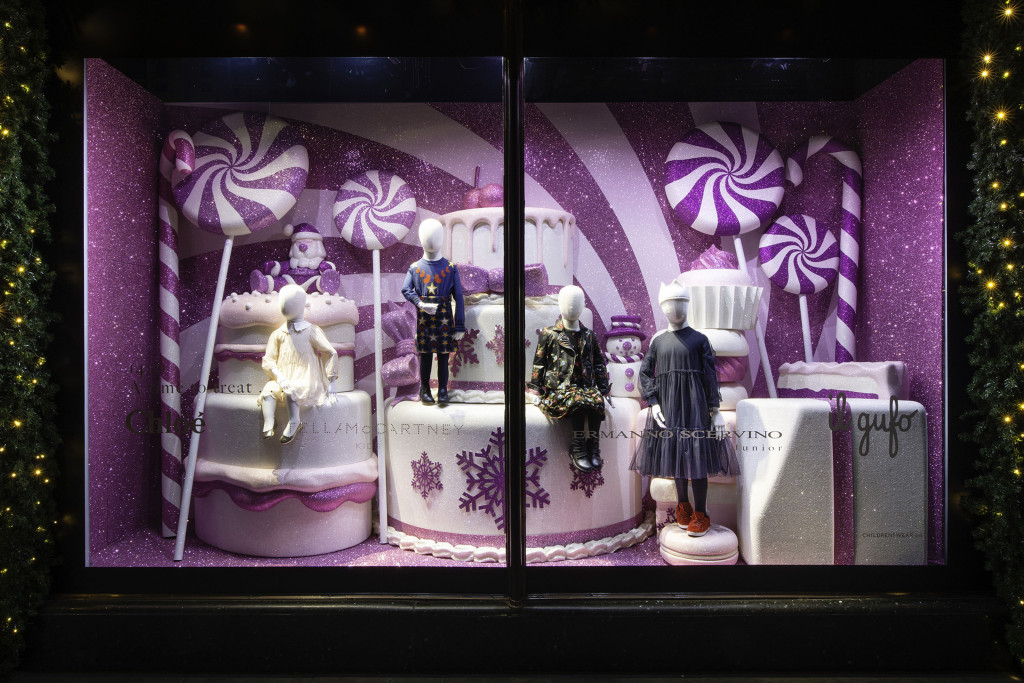 Harrods in London serves up sweet treats in a festive celebration with oversized, mouthwatering  desserts. 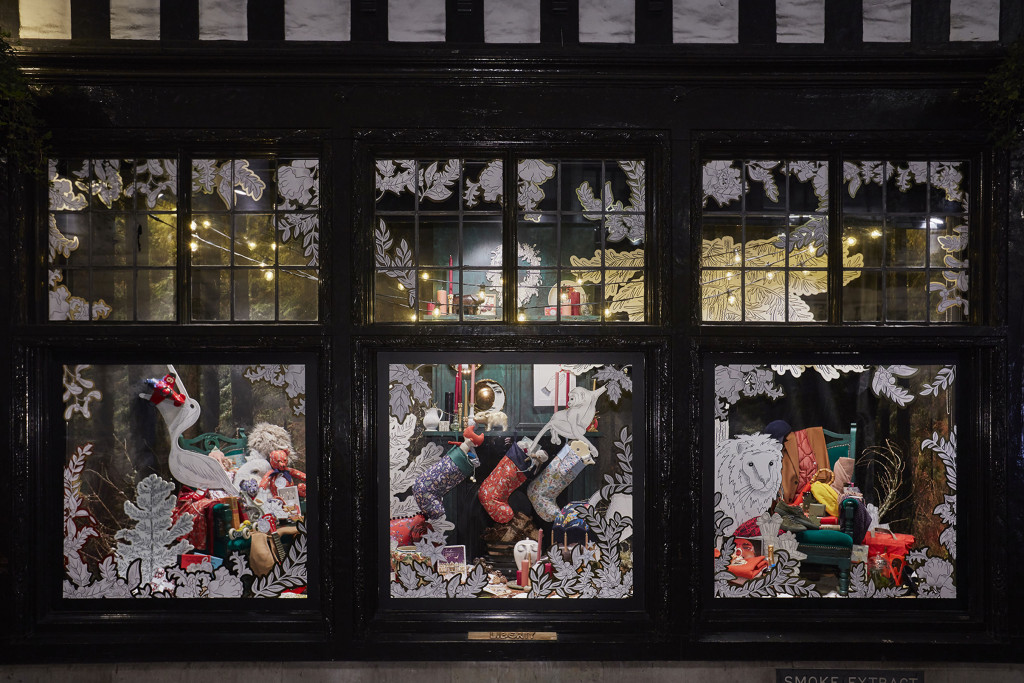 Liberty London’s animal etchings on pillars and panels are a well-known part of the decor. The creatures appear in windows as two-dimensional black-and-white cutouts. 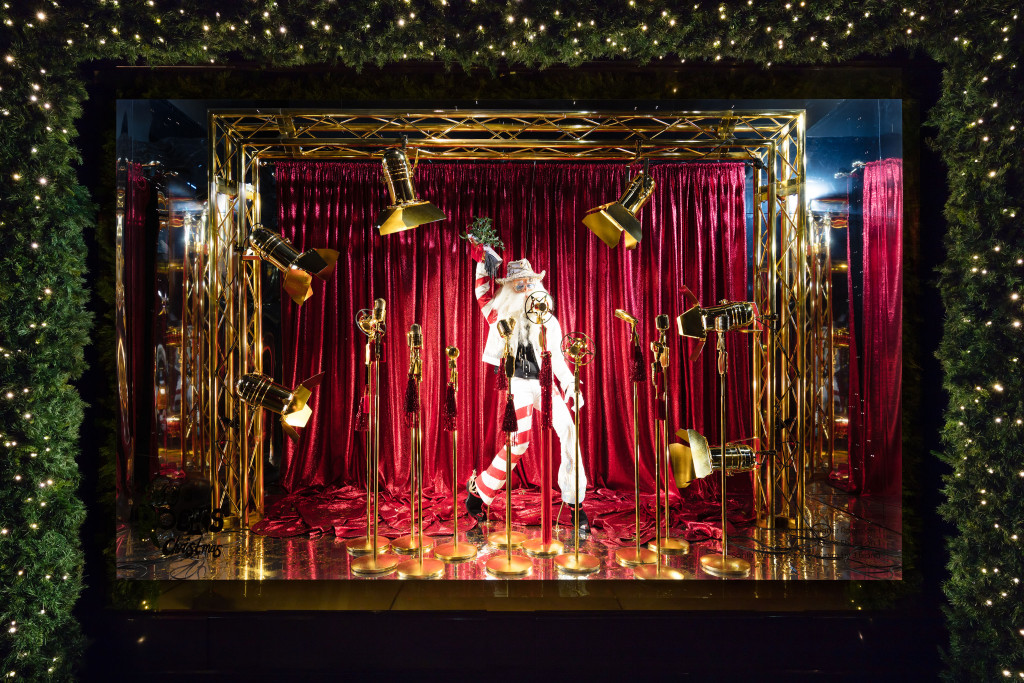 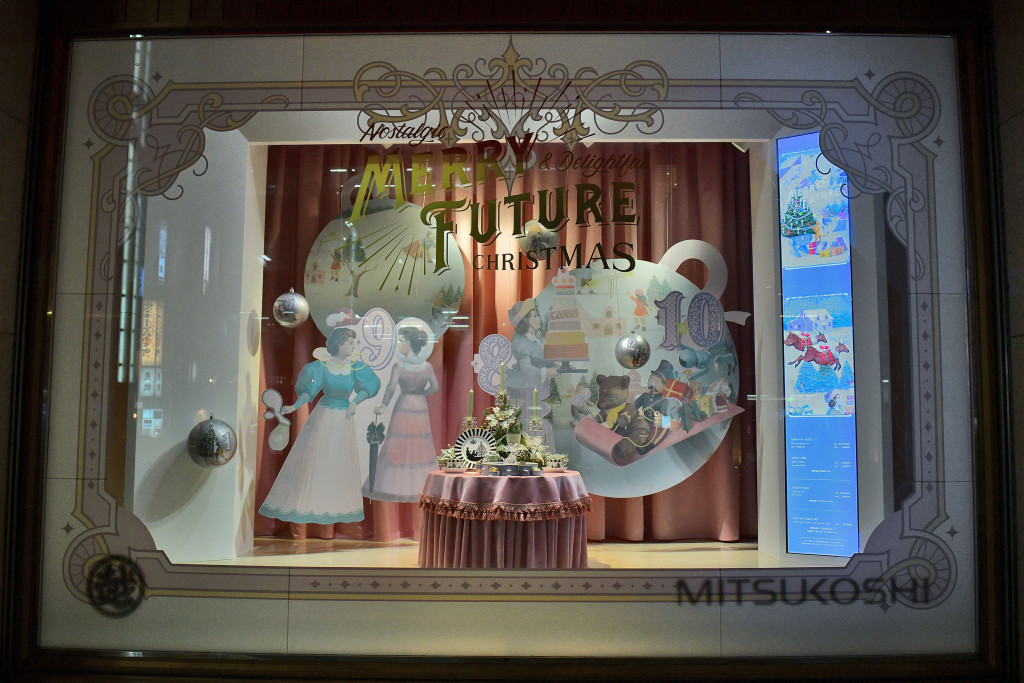 Mitsukoshi, located in Tokyo, mark the last Christmas of Japan’s Heisei period; the current emperor plans to abdicate in April, which will mark the beginning of a new period. Isetan creates a retro vision of the future featuring a rocking horse and snow globes cavorting with reindeer aided in flight by jet packs and Santa in a motorized sleigh. 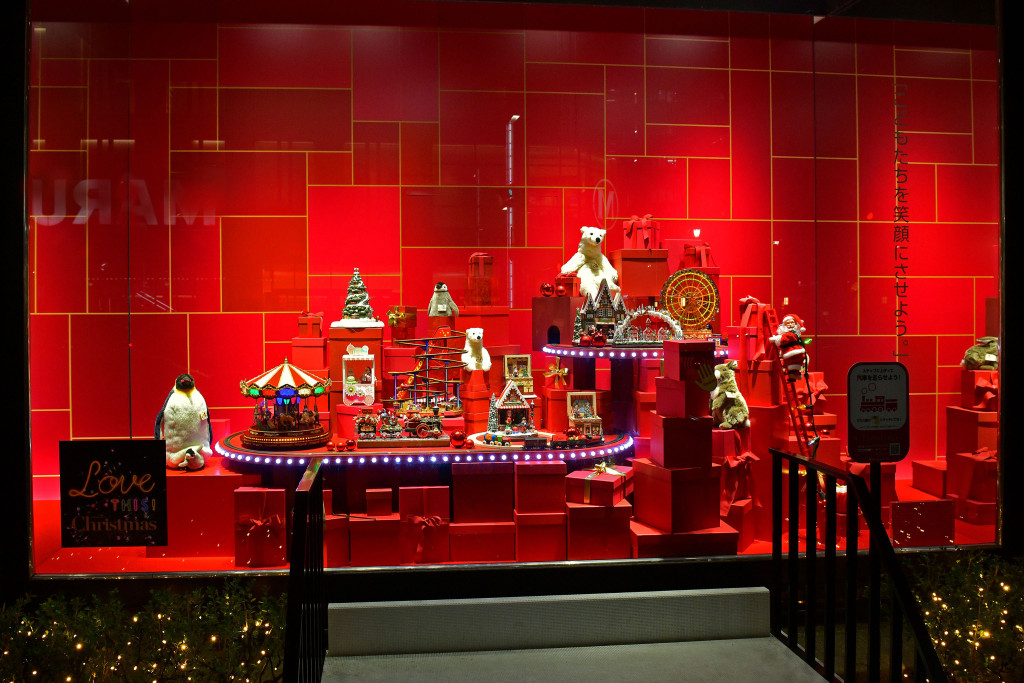 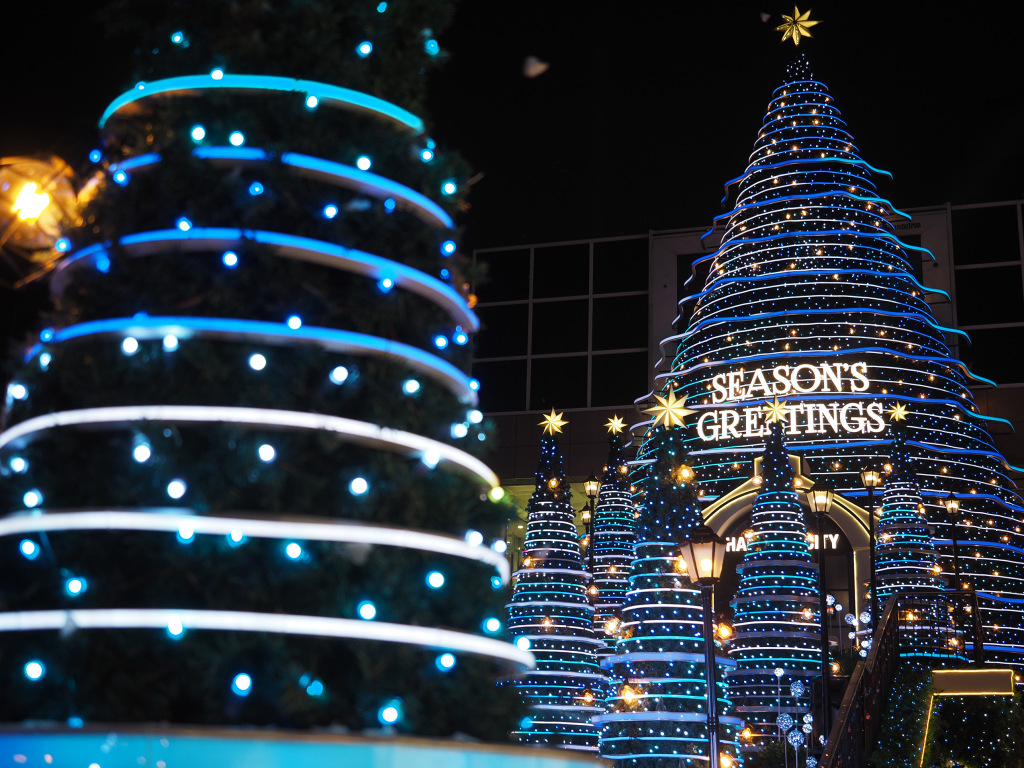 At Harbour City, Hong Kong, shoppers who donate to the Hong Kong Blood Cancer Foundation can take a selfie with a giant video kaleidoscope where LED screen walls are filled with snowflakes, stars and rainbows. 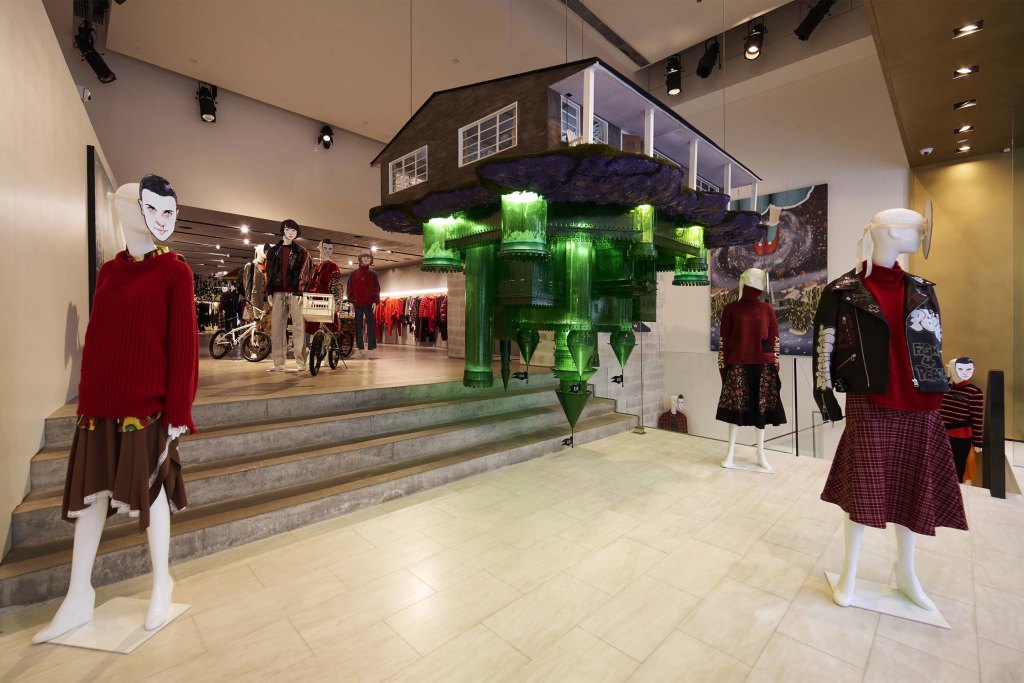 Joyce’s dramatic holiday décor in Asia is a cross between, “The Wizard of Oz” and “Stranger Things.” The outcome is an upside-down Emerald City topped by a right-side-up Indiana cabin. The cutting edge retailer also has a 50 foot Christmas tree suspended from its ceiling.

So tell us, which is your favorite Holiday window display?

For those of you still on the hunt for the perfect gift for that fav fashionista:

.Historical Dictionary of the Fashion Industry 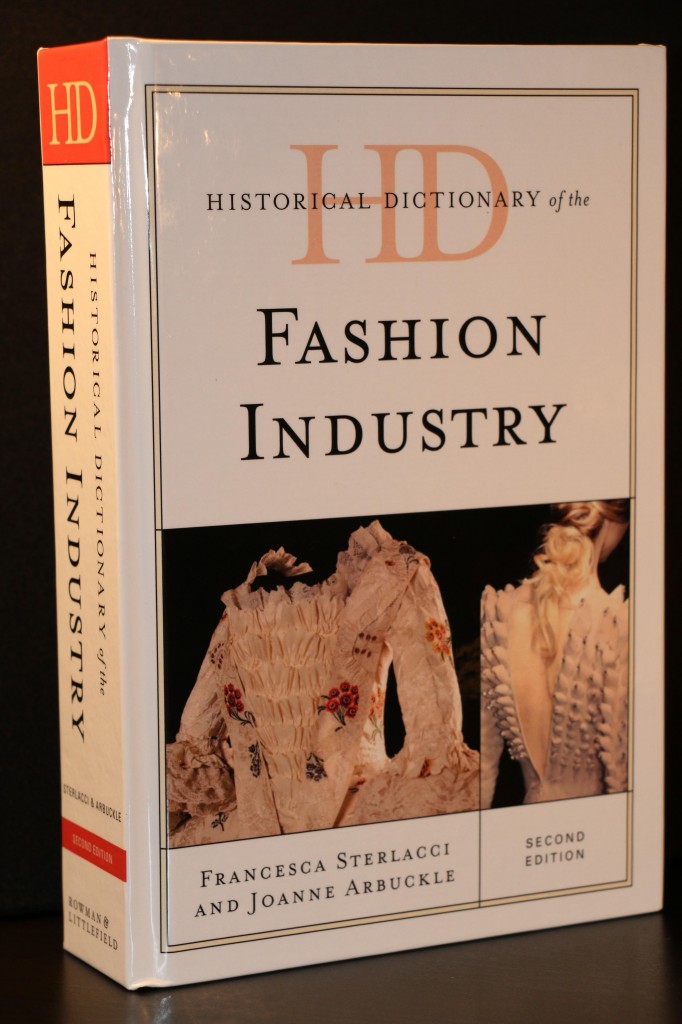 You can also pre-order our various technique books to perfect your skills:

To pre-order the Sewing: Techniques for Beginners – https://www.amazon.com/Sewing-Techniques-Beginners-University-Fashion/dp/1786271982/ref=sr_1_7?s=books&ie=UTF8&qid=1543860128&sr=1-7&keywords=Sewing+Techniques+for+Beginners 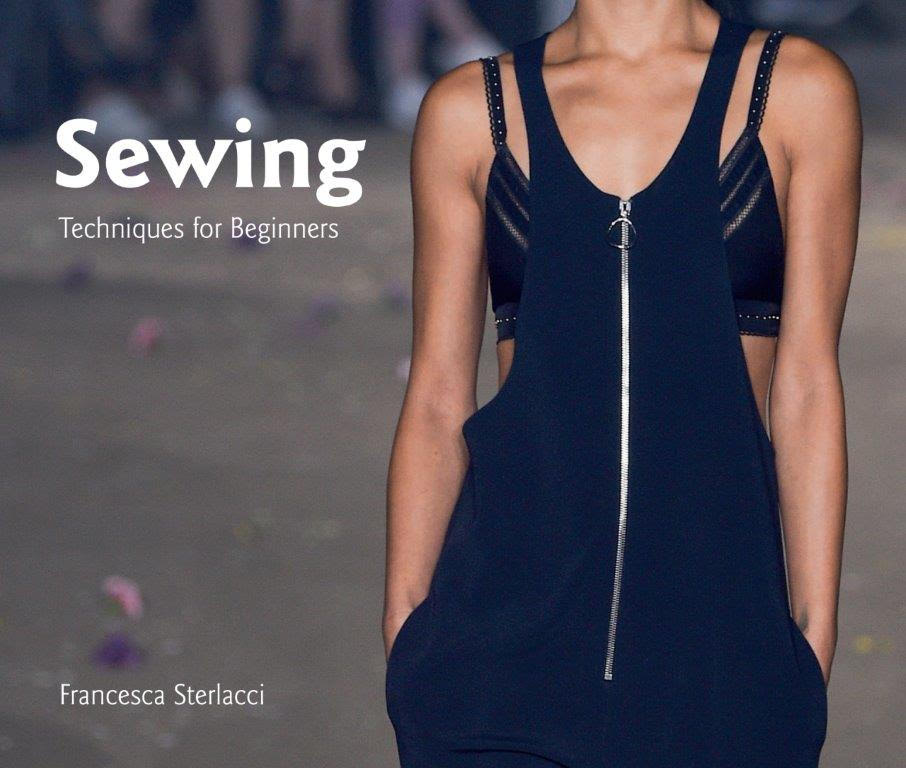 To pre-order the Draping: Techniques for Beginners – https://www.amazon.com/Draping-Techniques-Beginners-University-Fashion/dp/1786271761/ref=sr_1_1?ie=UTF8&qid=1543860392&sr=8-1&keywords=Draping%3A+Techniques+for+Beginners 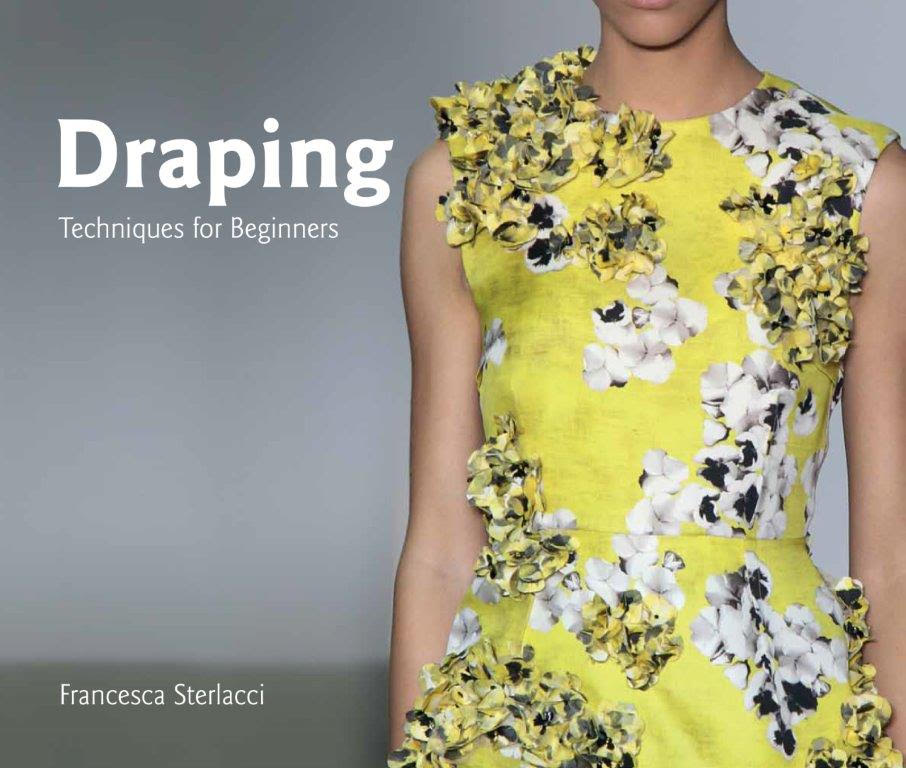 To pre-order the Pattern Making: Techniques for Beginners – https://www.amazon.com/Pattern-Making-Techniques-Beginners-University/dp/1786271966/ref=sr_1_3?ie=UTF8&qid=1543860796&sr=8-3&keywords=Pattern+Making%3A+Beginner+Techniques 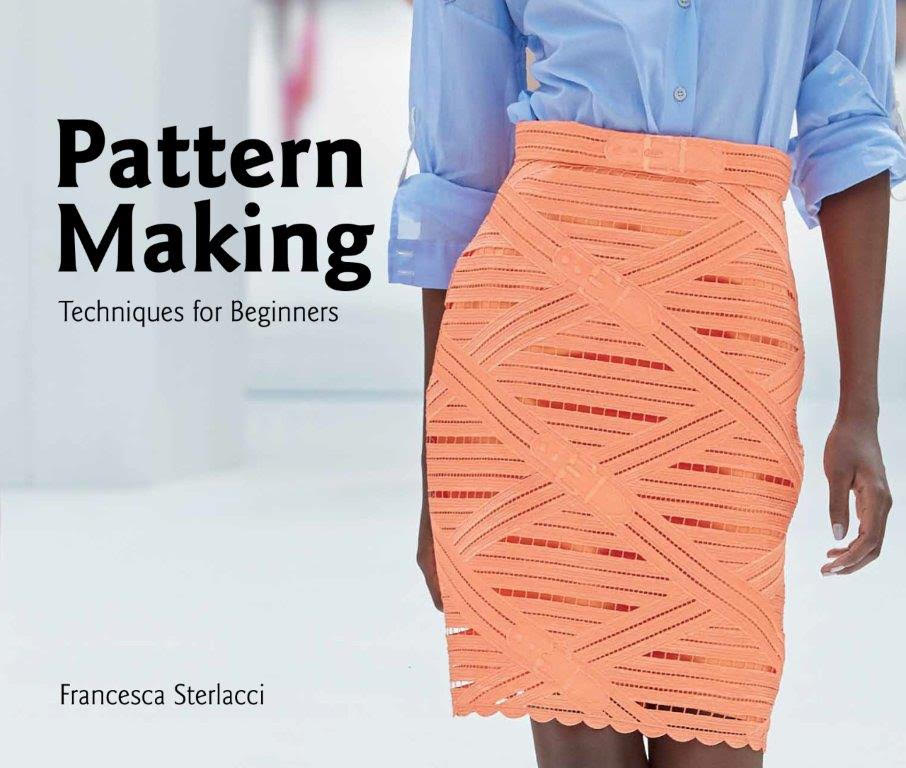 And how about a gift certificate to the UoF?