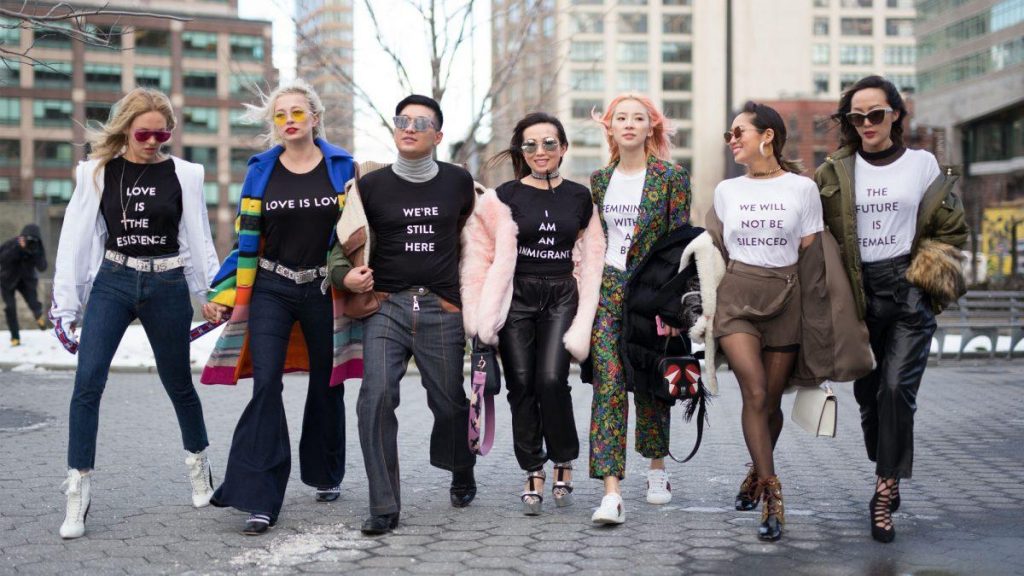 The Men’s Spring 2020 shows have just wrapped up, and while the runways were filled with plenty of notable trends, such as soft suiting at Givenchy, gender bending at Comme des Garçons, nautical looks at Prada, and romantic prints at Louis Vuitton  – the one trend that has been gaining momentum is the “designer as activist.” Fashion activism is nothing new. In the 1930s the Keffiyeh became a symbol of political uprising and rebellion. In the 1960s, designers gave us peace symbol T-shirts in protest of the Vietnam war,  and mini-skirts, which became the symbol for women’s rights and sexual liberation. In 2017, Cosmopolitan listed 22 designers who used their runway shows to promote a particular cause or in protest of global injustice. From pussy hats to white bandanas with the hashtag #TiedTogether (a symbol of inclusivity and acceptance), according to designer Talbot Runhof, “If you have a platform to say something and you don’t, then shame on you.” In the age of social media and the internet, where opinions and messages are delivered in lightning speed, designers, actors and other influencers feel duty-bound and a certain responsibility to bring attention to the relationship between fashion, politics and social change.

Here are a few noteworthy designers who have shown more than just clothes on their runways, past & present.

Virgil Abloh has developed a cult following with his collections for Off-White and the brand is worn by street style stars around the globe. For his men’s Spring 2020 show, Abloh focused on the negative effects of plastic and saving the environment. According to Abloh, “Plastic: once hailed as a miracle material, now condemned as a major pollutant — and possibly about to be considered a work of art.” The show’s invite was a clear plastic invitation with the words “plastic” printed on it.  Abloh believes plastic can be recycled and used to create something beautiful, such as art. Plastic even made its way in the collection with plastic rain gear and a hazmat suit.

As for the clothes, Abloh looks to street art for inspiration and tapped Futura, a contemporary of Keith Haring and Jean-Michel Basquiat, for the prints in this collection, case in point, a hand-painted white coat, top and pant look.To address his environmental concerns, Abloh featured an aquatic theme throughout the collection with shades of blue tie dye prints and amoeba-shaped appliqué motifs on knits.

The show ended with the models stomping through a beautiful field of white carnations that was created for the show. Abloh’s message was load and clear, we must protect our environment. 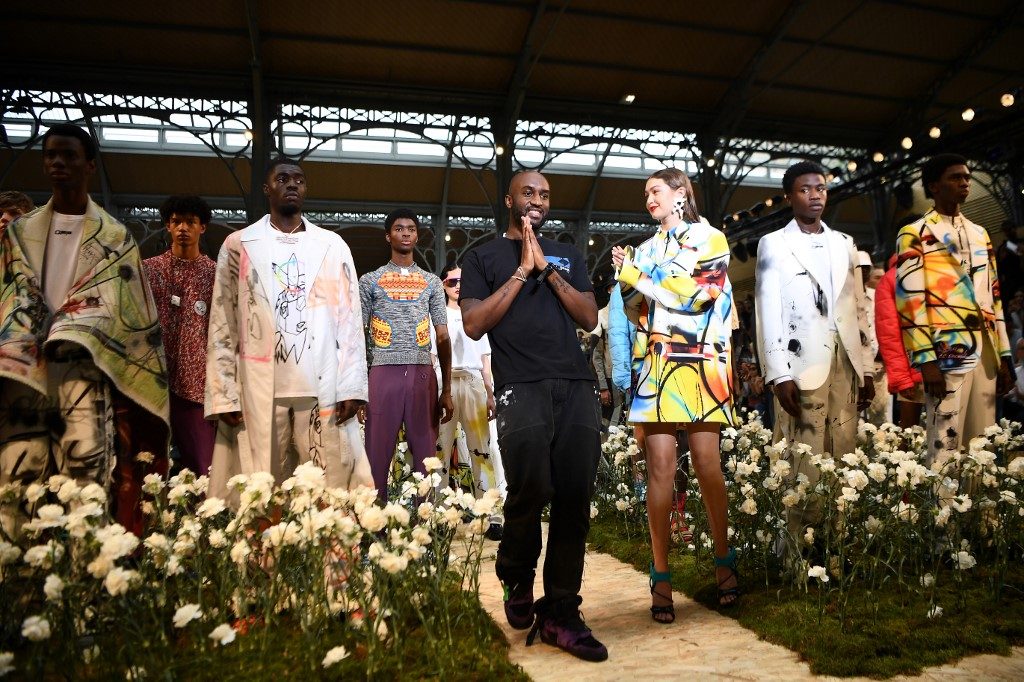 Stella McCartney has been one of the biggest advocates of the environment, a pioneer of sustainable fashion and an animal rights activist, since the creation of her namesake label in 2001.  McCartney Men’s 2020 collection was presented in a lush garden in Milan’s city center. According to Vogue.com, McCartney stated, “Let’s just forget fashion for a moment and savor all the natural beauty around us and talk about flowers!”

McCartney focused on playful tailoring, hand-printed silk shirts, ties and shorts with horse motifs, lightweight dusters and loose-fitting jumpsuits with satellite Earth prints and of course a collection that was fur free. McCartney kept the collection light and humorous, but her fight to save the earth is a serious one. 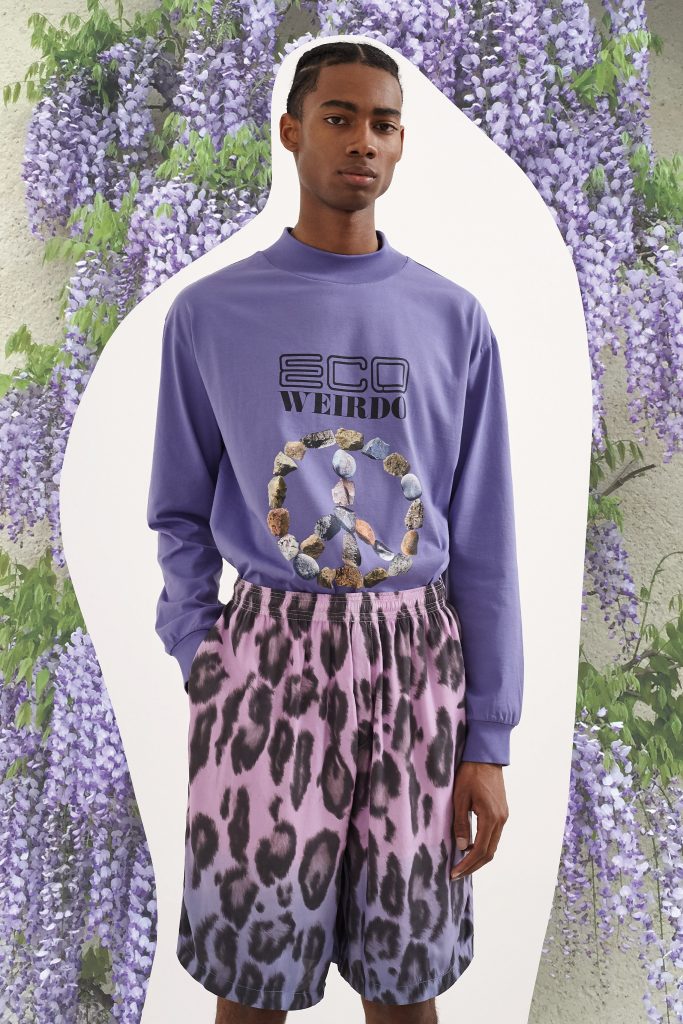 Herby Jean-Raymond launched his menswear label Pyer Moss in 2013 and followed up with a women’s collection shortly thereafter. In the few seasons Jean-Raymond has been presenting, the designer has quickly become known for his social activist stands. Most notably, he is inspired by the heritage of African-Americans, as well as social issues that this community faces today. 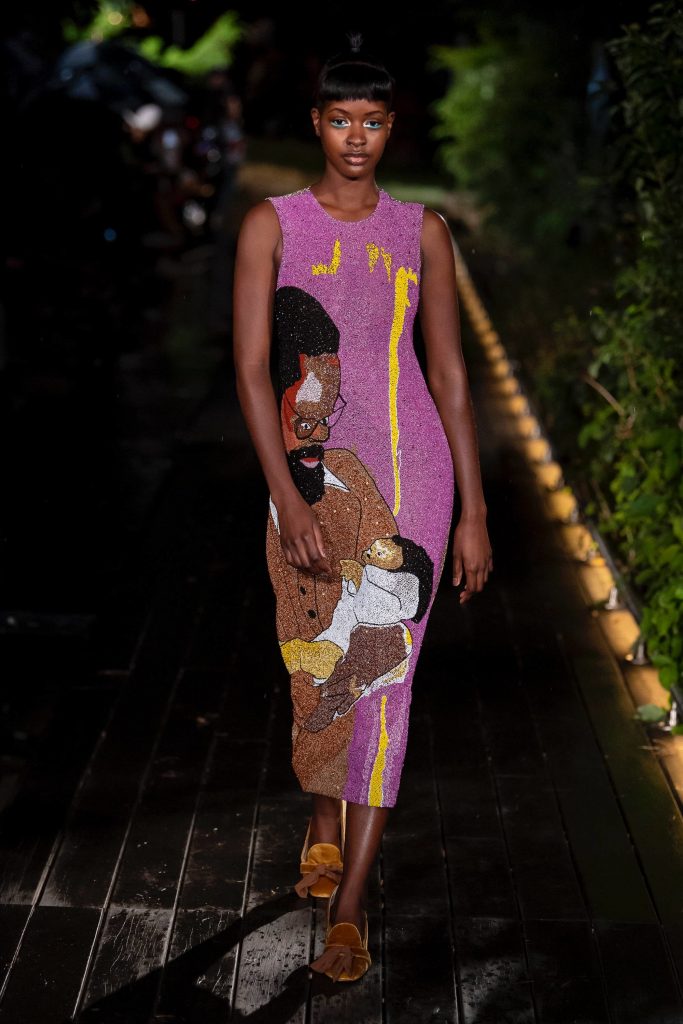 In July 2016 Dior announced that Maria Grazia Chiuri would be the first female creative director at Dior. Chiuri has been making political statements ever since.  T-shirts screen printed with “We Should All Be Feminists” and “Dio(R)evolution” were sold with proceeds going to Rihanna’s Clara Lionel Foundation, which fights against injustice, inequality & poverty and promotes access to education. 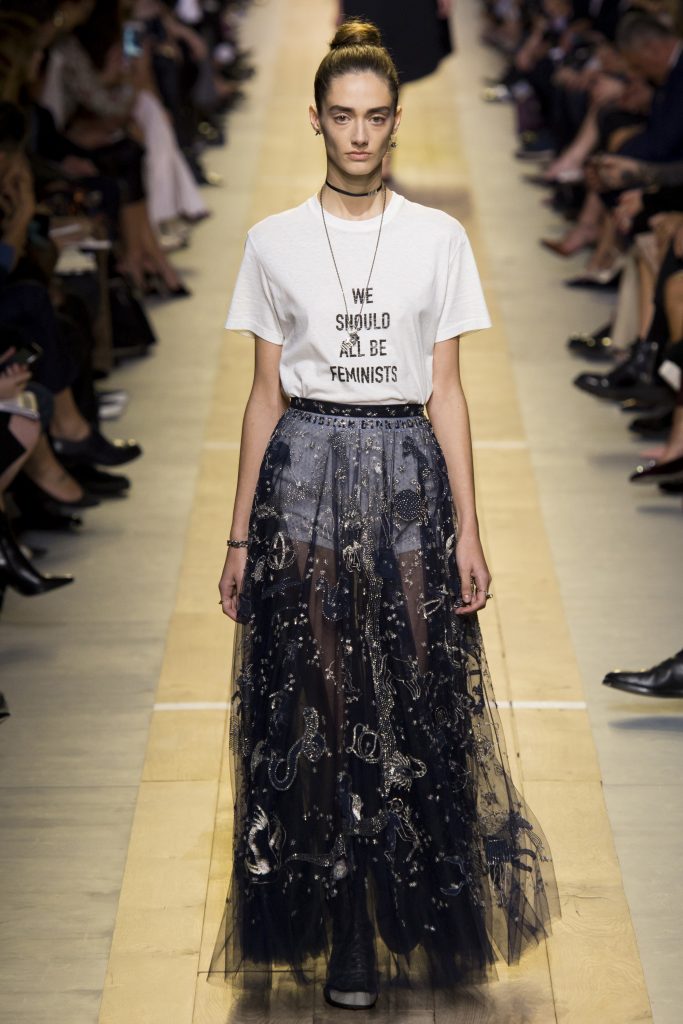 Fall 2017 was a big season for designers to speak out about social injustice. Attendees at Missoni’s Fall show each received pink pussy hats (madefamous by the Women’s March on Washington in January 2017). Guests proudly wore the hats, as did the models during the finale.

According to Angela Missoni, creative director for the label, their message for Fall 2017 was all about “femininity in our times, prepared to confront the conflicts and dilemmas of our contemporary society: the conditions, needs, and rights of all women and minorities.” 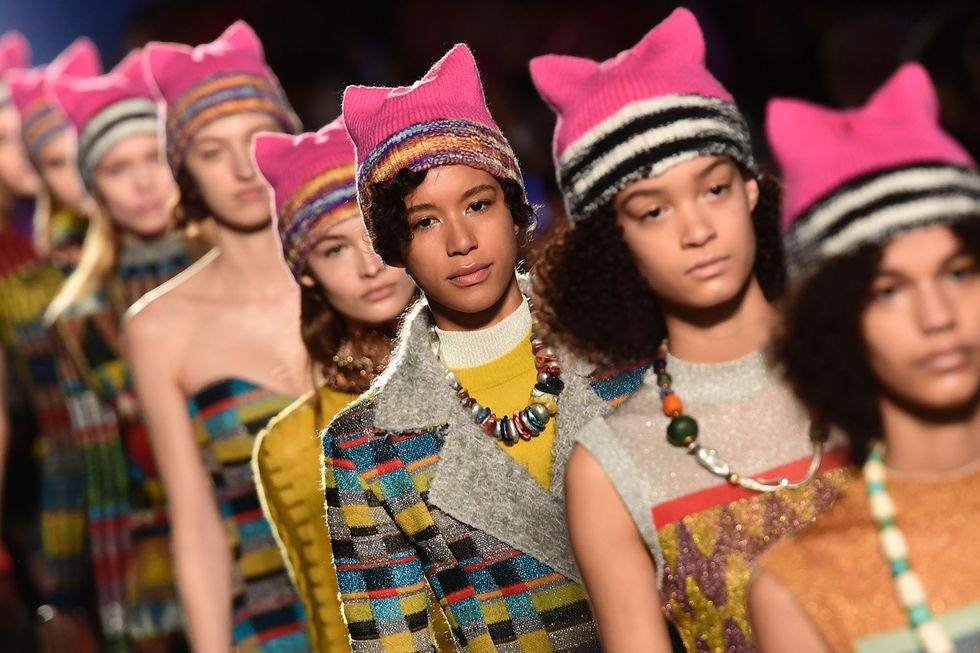 Rio Uribe, the designer behind Gypsy Sport, gave a passionate speech before his show which focused on homelessness and refugee tent cities. “I wanted to talk to you guys a little bit about my show,” he said from a mic backstage. “The Fall/Winter ’17 collection was inspired honestly by people who live on the street and just don’t have much fashion in their life or any of the luxuries that we take for granted. … I don’t want anyone who is gay, or Muslim, or disabled, or mentally ill, or a veteran, or a drug addict, or a runaway to have to live on the street just because someone’s not willing to give them a chance.” 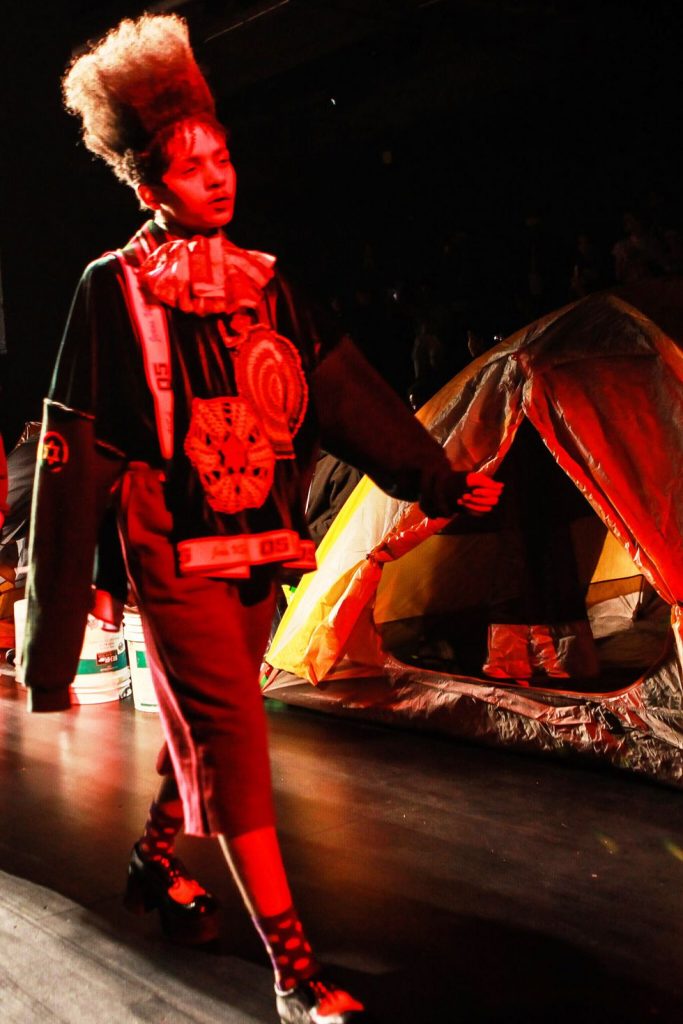 Prabal Gurung created “The Future is Female” T-shirt for his Fall 2017 show. According to Gurung, “So to me feminism is not just a trending topic. It’s the only way I’ve known, even before I knew what [feminism] was.” 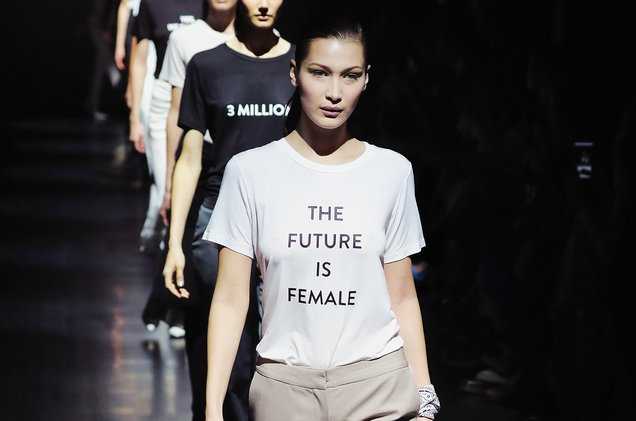 “All-inclusive” hit an all-time high in Fall 2017 as Christian Siriano enlisted models of all sizes to walk his runway show, from plus-size & petite to curvy, as well as plenty of racially diverse women. The 2008 Project Runway winner consistently speaks out against fashion magazines’ unrealistic body standards that are set by the modeling industry. He believes designers have the power to change this by adjusting their hiring process and sizing. 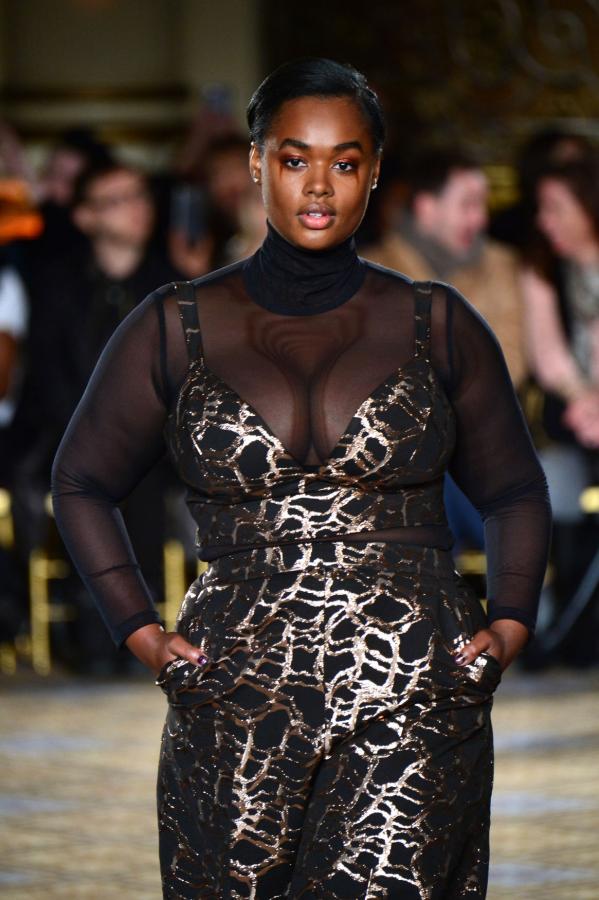 A plus sized model walks Christian Siriano’s show during his 2017 fashion show. (Photo courtesy of cosmopolitan.com)

During Tommy Hilfiger’s 2017 extravaganza in Venice Beach, models strutted down the runway wearing white bandanas as part of Business of Fashion’s #TiedTogether initiative. According to Business of Fashion founder and CEO Imran Amed, this campaign encouraged people to wear the colorless handkerchief “to make a clear statement in support of human unity and inclusiveness amidst growing uncertainty and a dangerous narrative peddling division.” 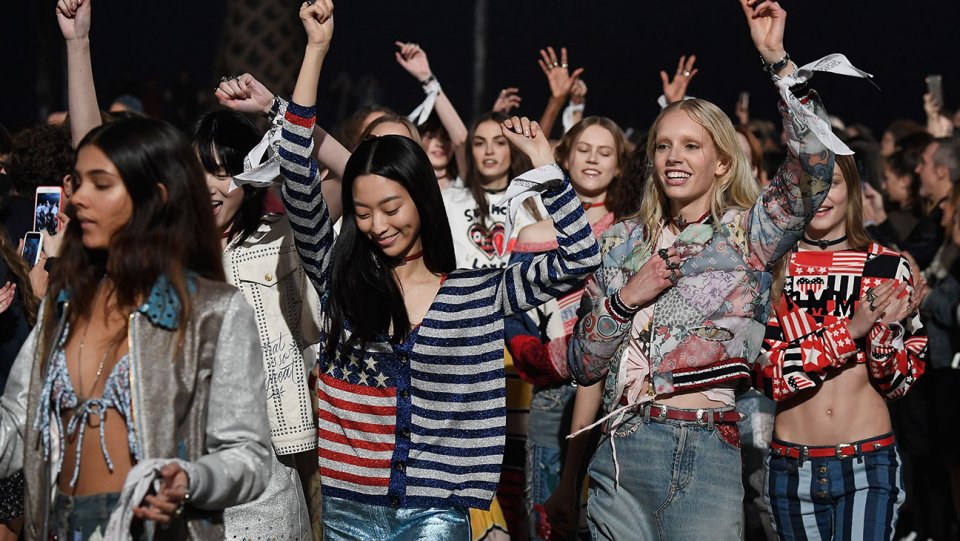 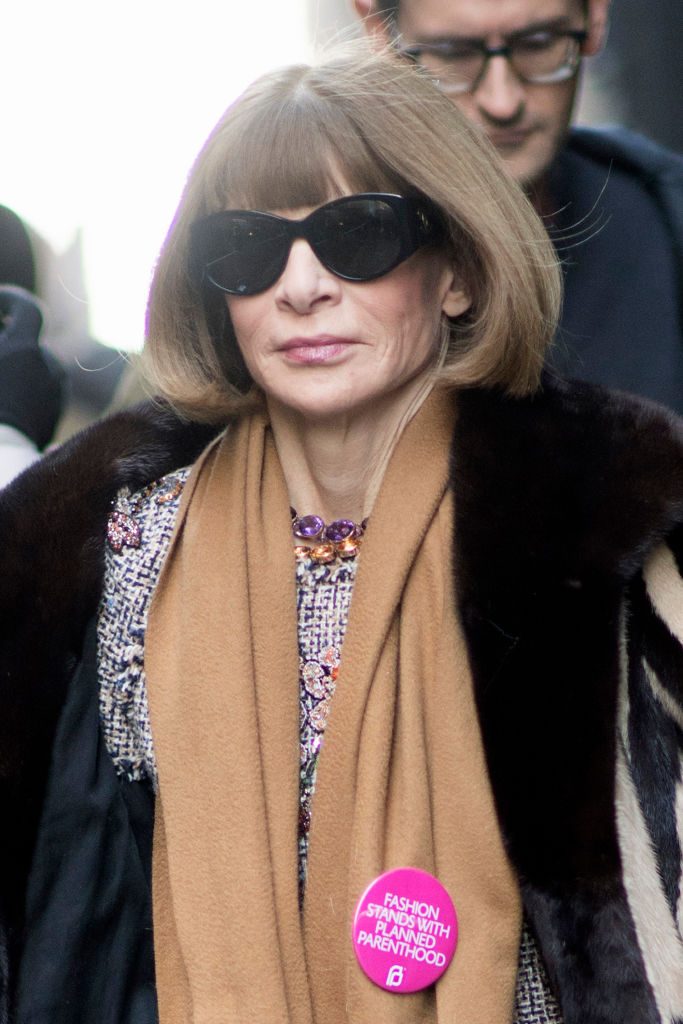 At the New York Spring 2018 shows, a “Get out and Vote” message dominated in advance of the U.S. mid term elections. 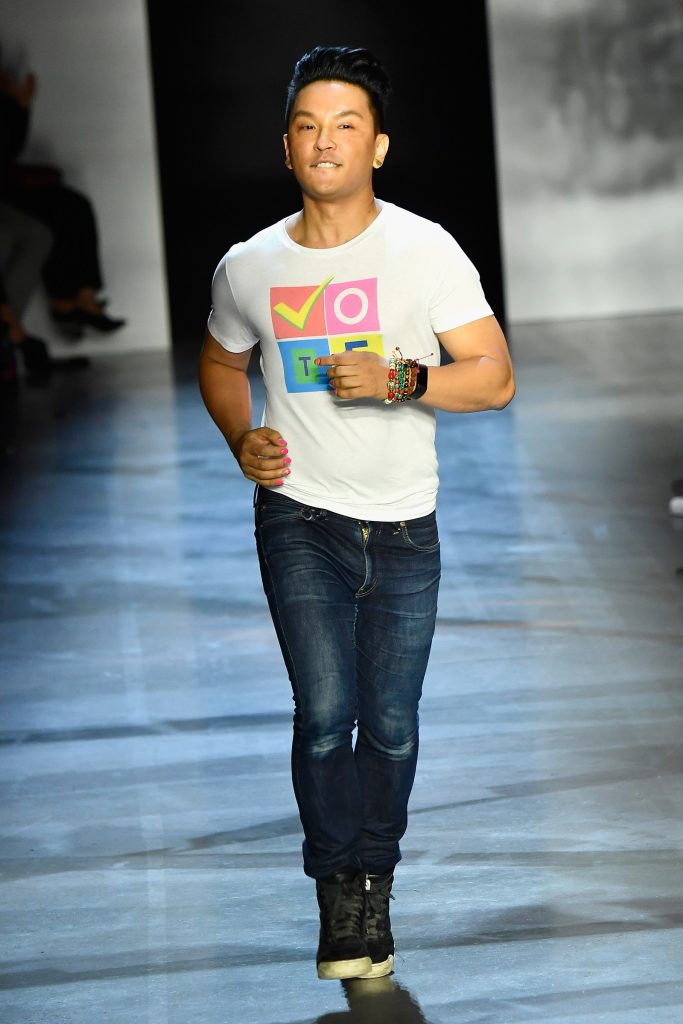 While Stella McCartney has been creating fur-free and leather-free clothes for years, many designers have now jumped on the bandwagon.

As of September 2018, Burberry announced that it would also be going fur-free, a big move ever since Riccardo Tisci became the creative director for the label. The brand will no longer be using rabbit, fox, mink, and Asiatic raccoon fur, though they will still feature angora, shearling, and leather. 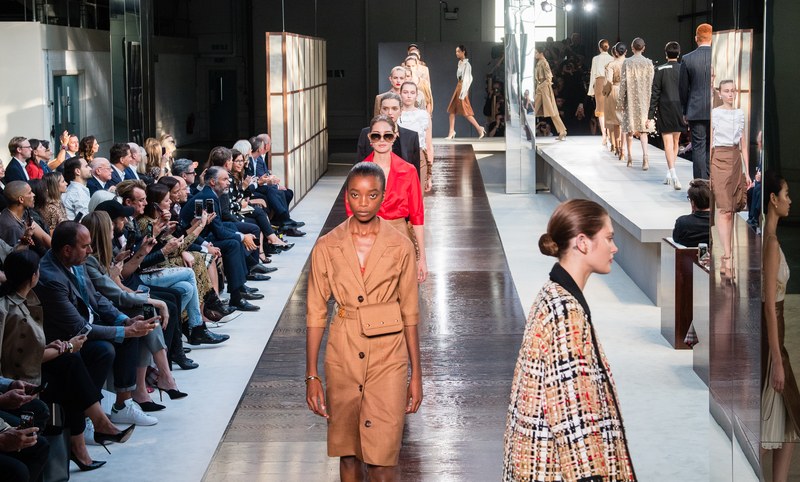 Shockingly, in March 2018, Donatella Versace announced that she would no longer be using fur in her collections. “Fur? I am out of that. I don’t want to kill animals to make fashion. It doesn’t feel right,” she told 1843 magazine. 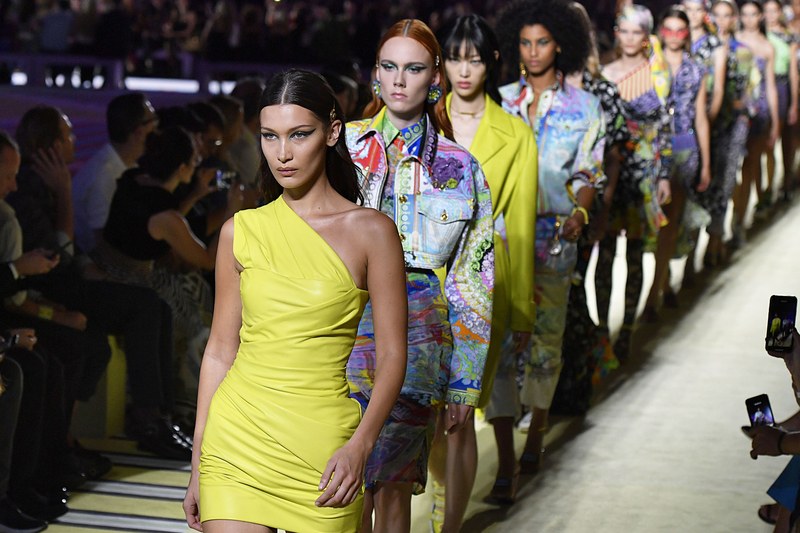 In June 2017, protesters interrupted a live interview with Michael Kors at New York City’s Metropolitan Museum of Art, with signs that read “Michael Kors has blood on his hands.” This prompted Michael Kors to announce that his company would be going fur free as of December 2018. 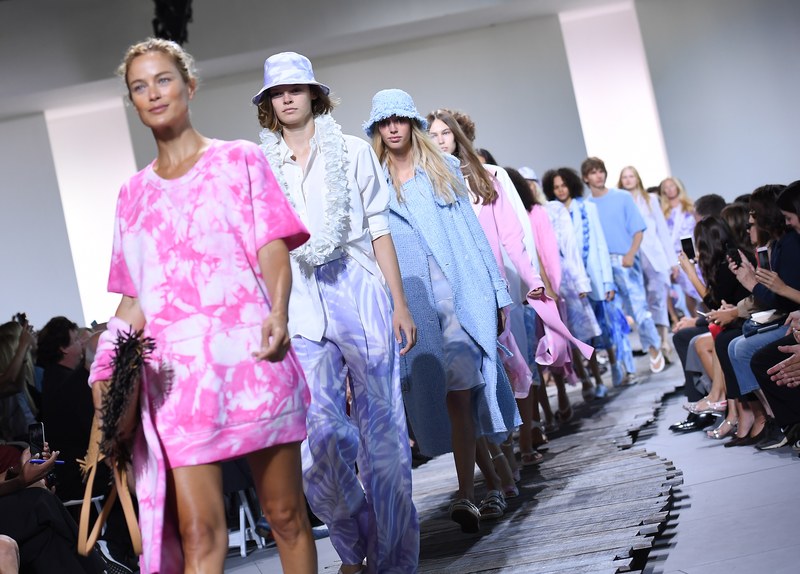 In October 2017, Gucci announced it would be going fur-free as well. Alessandro Michele is opting for sustainable alternatives to create his “grandma-chic” vibe. Prada also added their name to the fur-free list as of 2020. 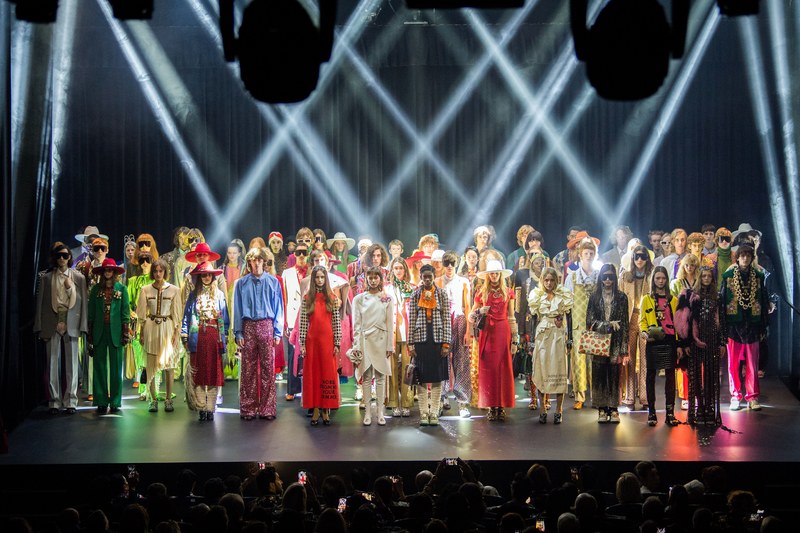 Following in the footsteps of San Francisco and Los Angeles, New York is now considering a ban on fur as well, however, there is a lot of push back. One of the oldest industries in New York City dating back to when Henry Hudson explored the region in 1609 and found French traders bartering for furs with Native Americans. New York became a thriving trading post of beaver and other skins that traveled through New York Harbor and to Europe. In fact, the official New York crest includes beavers, whose valuable pelts helped fuel the early fur trade. Stay tuned!

Designers with a History of Rocking the Boat

English fashion designer Katherine Hamnett is best known for her political T-shirts and ethical business philosophy. In 1983 she stated, “If you want to get the message out there, you should print it in giant letters on a T-shirt.” Celebrities such as George Michael (who was part of Wham at the time) wore one of her “Choose Life” tees in a music video for “Wake Me Up Before You Go-Go.” Roger Taylor of Queen, wore her “WORLDWIDE NUCLEAR BAN NOW” T-shirt during Queen’s historic appearance at the first edition of the Rock in Rio festival in Rio de Janeiro. 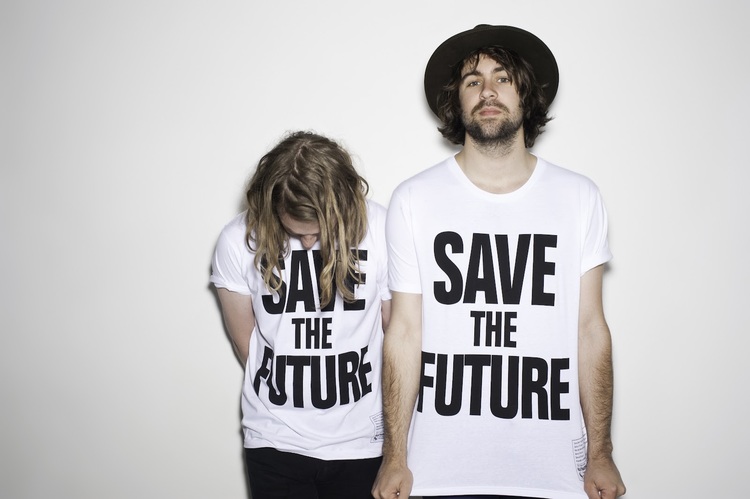 Vivienne Westwood is another British fashion designer and businesswoman, who was largely responsible for bringing modern punk and new wave fashion into the mainstream. Westwood has retail shops worldwide and sells a variety of merchandise; some of it linked to her many political causes, such as the Campaign for Nuclear Disarmament, climate change and civil rights groups.

In 2000, John Galliano created one of the most controversial fashion shows ever. For his Christian Dior Haute Couture collection, Galliano was inspired by the Paris homeless. As a master of shock value, his message rang loud and clear in a city of beauty and glamour. The show created such controversy that homeless activists picketed outside the Dior headquarters and riot police had to be called in to deal with the protesters. As a result, Dior’s flagship was closed for two hours and Galliano had to issue an apology statement,  “I never wanted to make a spectacle of misery.” 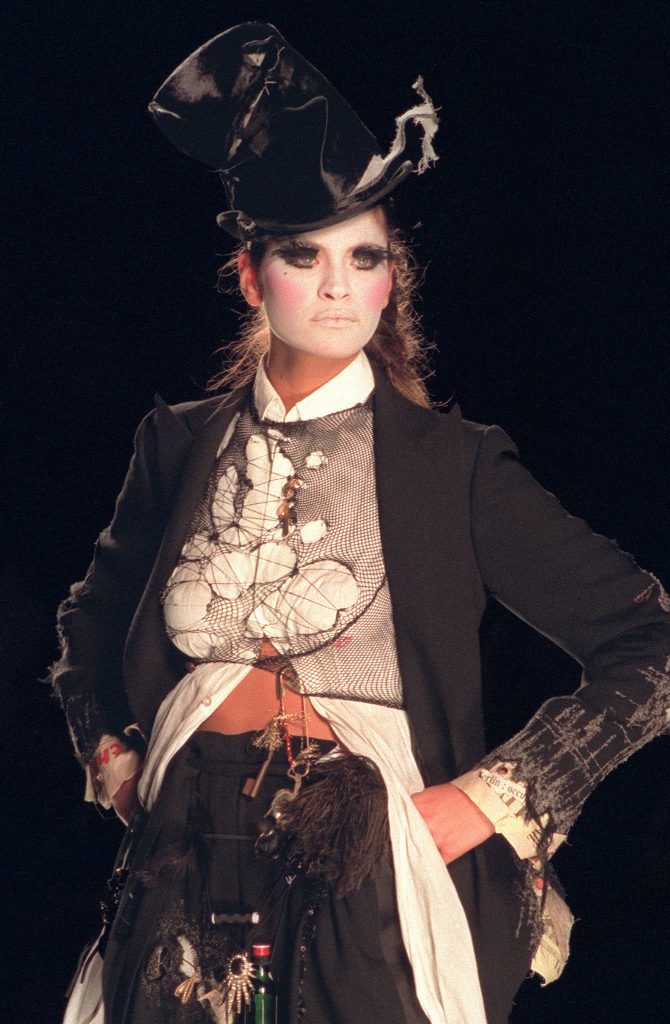 Alexander McQueen’s inspiring showmanship is greatly missed, ever since his suicide on February 11, 2010. For the late designer’s Fall 2009 collection, McQueen took an environmental stance on the runway as his models dressed in fiercely tailored coats, boxy jackets and airy gazar dresses walked around a heap of trash. McQueen even referenced trash in some of his looks such as aluminum can accessories.  It was all so hauntingly beautiful.

Karl Lagerfeld is another designer who is greatly missed for his theatrics. The late designer passed away on February 19, 2019 in Paris. For his Spring 2015 collection, Lagerfeld took a feminist stance and created a playful protest for woman’s equality. According to Vogue.com, “ Cara Delevingne and Caroline de Maigret had megaphones in hand as a parade of models including Kendall Jenner, Georgia May Jagger, Edie Campbell, Joan Smalls, and even Gisele Bündchen, brandished signs that read “History is Her Story,” “Feminism Not Masochism,” “We Can Match the Machos” and “Ladies First.” Even male model Baptiste Giabiconi waved a “He For She” banner, which just might be our favorite nod to Emma Watson’s global UN campaign yet. Perhaps the “Free Freedom” sign was a winking nod to Free the Nipple, the cause du jour for models like Delevingne, who opened the show and Kendall Jenner, who Instagrammed about it post show. “I’m Every Woman” blared from the speakers, and everyone danced in their seats.” 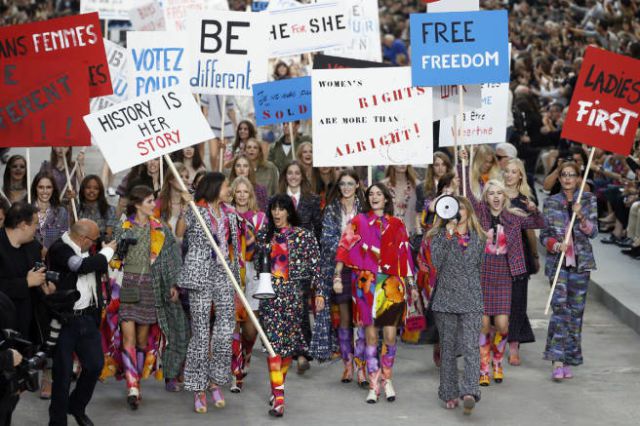 While some fashion critics predicted a worldwide boycott of Nike products after their controversial “Just Do It” campaign featuring Colin Kaepernick, they were proven wrong when the company reported a 10 percent jump in income. It turns out that millennials expect companies to take a position on social and political issues.

TELL US, HOW IMPORTANT IS IT TO YOU THAT BRANDS TAKE A STAND ON SOCIAL, POLITICAL AND ENVIRONMENTAL ISSUES ?