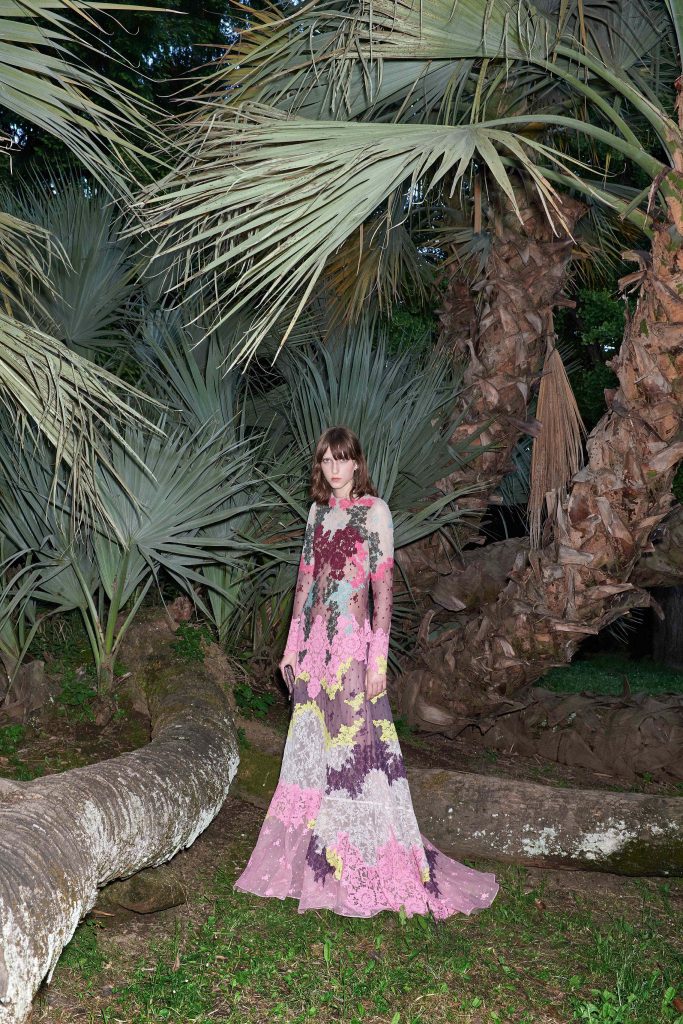 It’s the time of year when glamorous resort shows are flooding social media channels. And, while some designer’s whisk their clients and the press off to exotic locations around the world to witness their show, but what does this season actually mean for retailers and us as consumers? In the age of transparency, social justice and a world in flux, how are these issues reflected in the resort collections at some of the world’s major famous houses?

By definition, “resort,” (also known as cruisewear), was a season originally targeted to affluent customers who spent their post-Holiday/New Year’s weeks in mostly warm weather climates. However, due to a better economy and easy access to flights, more consumers have the income and the ability to  travel. As a result, cruisewear has become a major category for the fashion industry. It has also become a season for designers to try out new ideas ahead of their Spring collection.

Resort has also become a favorite for retailers, after all, it’s the longest selling season, hitting the floor around November and selling, at full price, until May when spring collections hit the stores. Today, brands at all price points create resort collections to satisfy their customers who crave a new purchase. 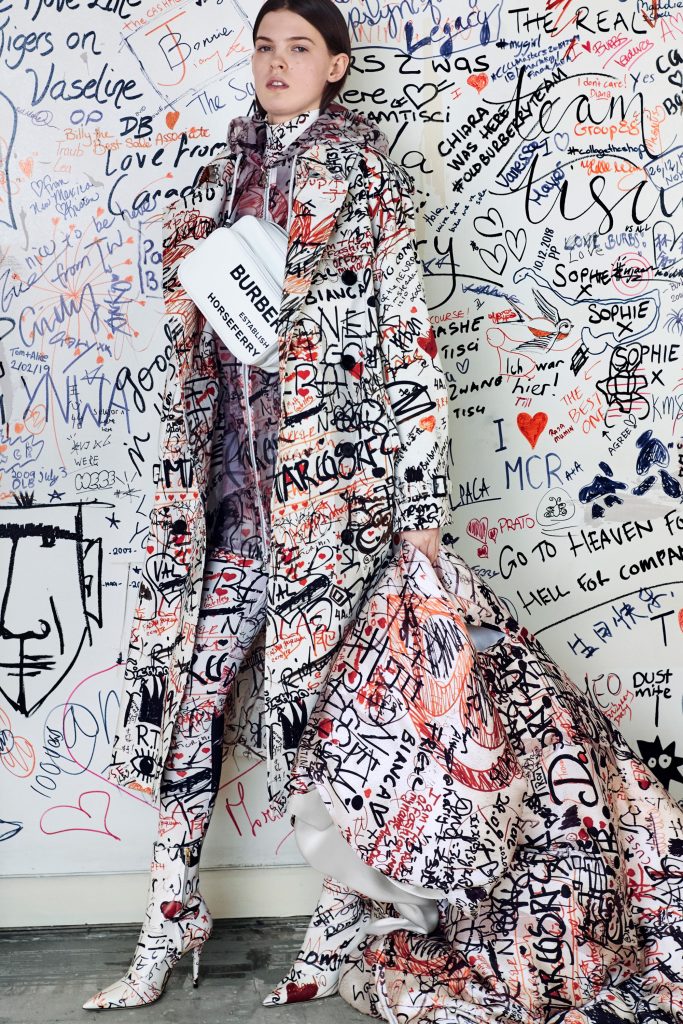 With concerns about global corruption, transparency, climate change, inequality and the need to escape or get way from the world’s craziness, it’s easy to see why consumers, with a simple click of a button, are enticed to make resort season purchases.

Resort season went from APRIL 29 – MAY 30, 2019. Here are a few designers that have created social media spectacles with their elaborate shows. 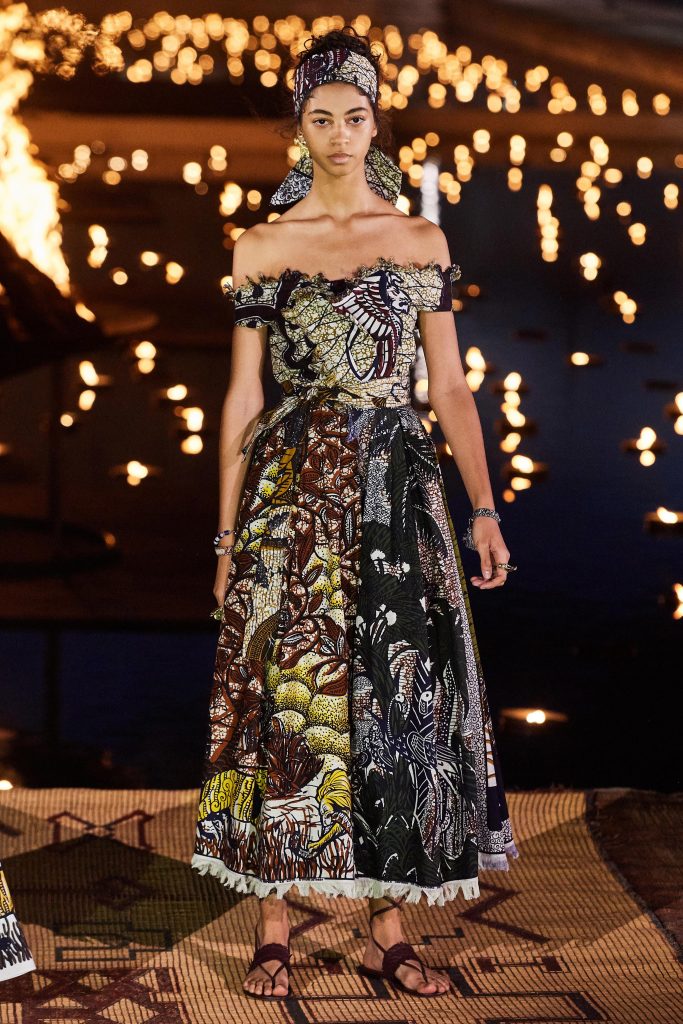 Maria Grazia Chiuri, the designer behind the luxury powerhouse Christian Dior, presented an elegantly chic collection in Marrakesh for her resort 2020 collection. The collection was an homage to 1960s Yves Saint Laurent and featured rich textiles and intricate prints on everything from boyish outerwear to feminine frocks. 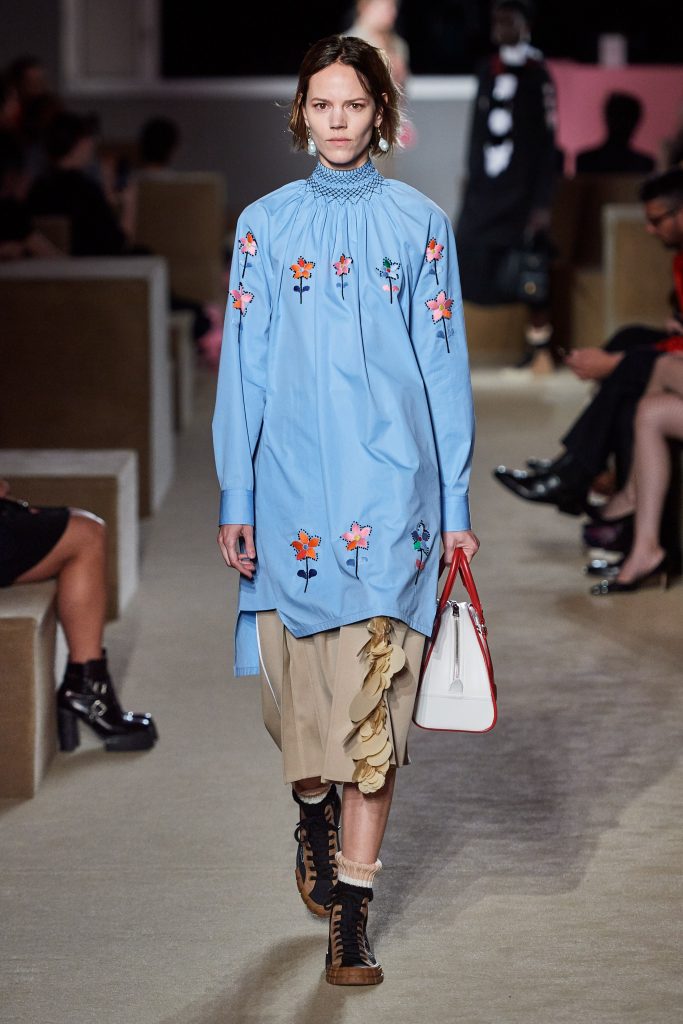 All glitz and glam aside, Miuccia Prada showed her low-key, understated resort collection in her company’s West 52nd Street Piano Factory headquarters, but nonetheless, the event was filled with a star-studded front row. Prada went back to the paired down 90s aesthetic that made the designer a household name, but this time with a pretty, feminine twist. Prada worked primarily with cotton this season with sweet calico-prints, charming hand embroideries and smart striped shirtings in intricate shapes. 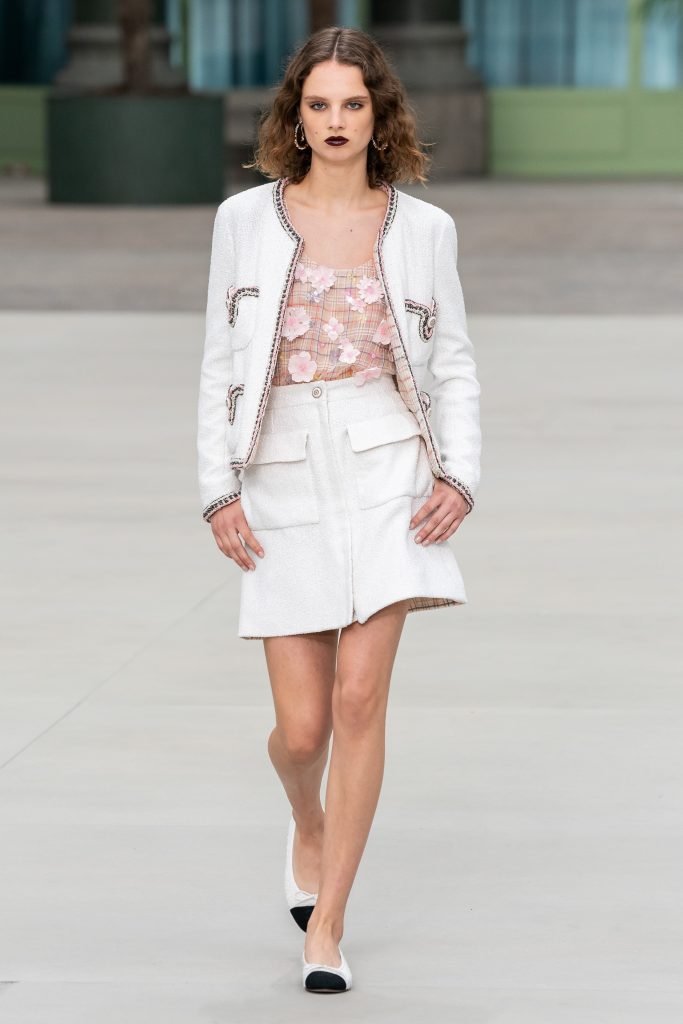 In her debut collection at the helm of Chanel, Virginie Viard kept true to Karl Lagerfeld’s grand showmanship. Viard recreated a pre-war train’s dining carriage  a la a Belle Epoque café  resembling Le Train Bleu at the Gare de Lyon.  The show came complete with potted palms and paintings suggesting the many glamorous destinations that the train might take you (all of them settings for past Chanel collections).

As for the clothes, Viard brought a new effortless ease to the Chanel silhouette with mini-skirted classic Chanel suit, tiered chiffon dresses and wide legged cropped pants paired with frothy blouses. It was exciting to see Viard stay within the DNA and house codes of Chanel and yet give the label a youthful twist. 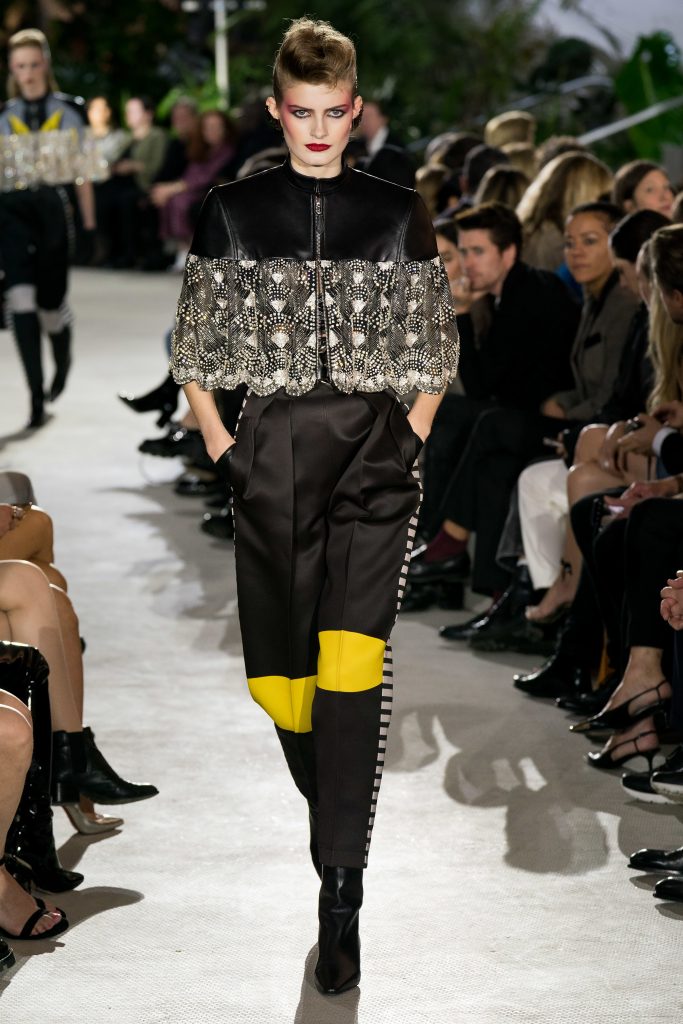 Anyone who has followed Nicolas Ghesquière’s career knows that no one designs wearable, futuristic-inspired looks better than him. For his Louis Vuitton resort collection, the creative director held his show at the historic TWA Flight Center, designed in 1962 by Eero Saarinen. The space is reminiscent of a landed UFO in the middle of New York’s JFK airport.  Although the space has been closed for almost twenty years, it has now reopened as a luxury hotel and Ghesquière’s show was its unofficial opening party. Quite the ‘get’!

Seemed only fitting that Ghesquière was inspired by 1960s airline stewardess’ with short dresses and a nod to TWA’s iconic flight bags. New York City was also a point of reference for Ghesquière with his Wall Street-inspired pinstriped suits, while crystal embellished bustier tops and geometric metallic embroideries referenced Art Deco inspired skyscrapers, most notably the Chrysler Building. Overall, the Vuitton resort collection was dramatic and fun, one that will be worn by plenty of Hollywood starlets on the red carpet and beyond. Thanks Nicolas for your nod to the Big Apple! 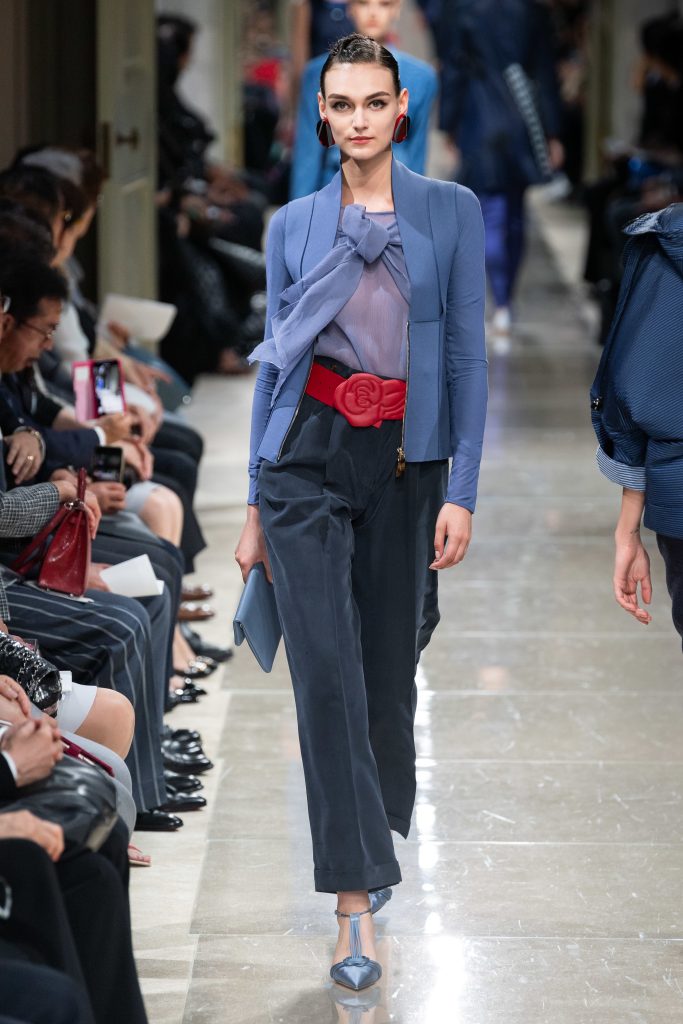 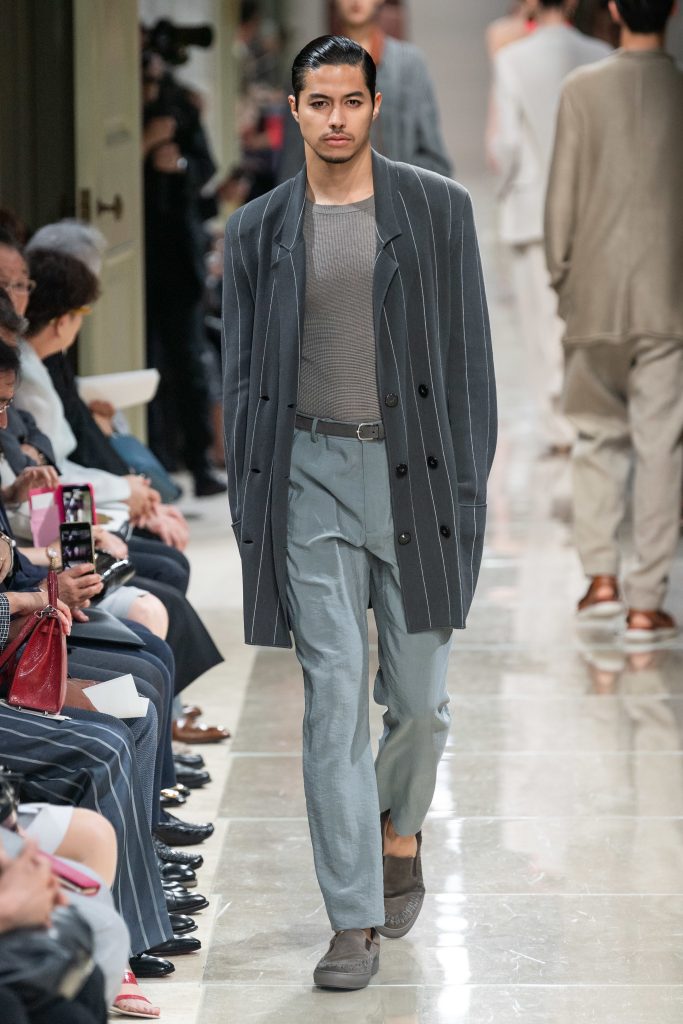 For years, designers have staged over-the-top shows and traveled to exotic locations around the globe to present their pre-collections. But Giorgio Armani has always shunned that notion. And so it came as a complete surprise to press and buyers alike, that this season the designer decided to show his resort 2020 collection in Tokyo, as part of his grand store reopening. In a press conference before the show, Giorgio Armani stated, “I do not agree with this. Resort collections are mainly commercial; they have to be salable and appeal to buyers.” Armani speaks his mind and does things his own way.

Armani showed his collection at Tokyo’s National Museum, which is home to the most precious and rare Asian art collections. The glamorous affair was filled with Japanese and international celebrities, including Uma Thurman.

As for the clothes, they were Armani at his finest, with so many variations of the pantsuit – for both men and women – that there was literally an option for every customer. Now that’s business savvy! 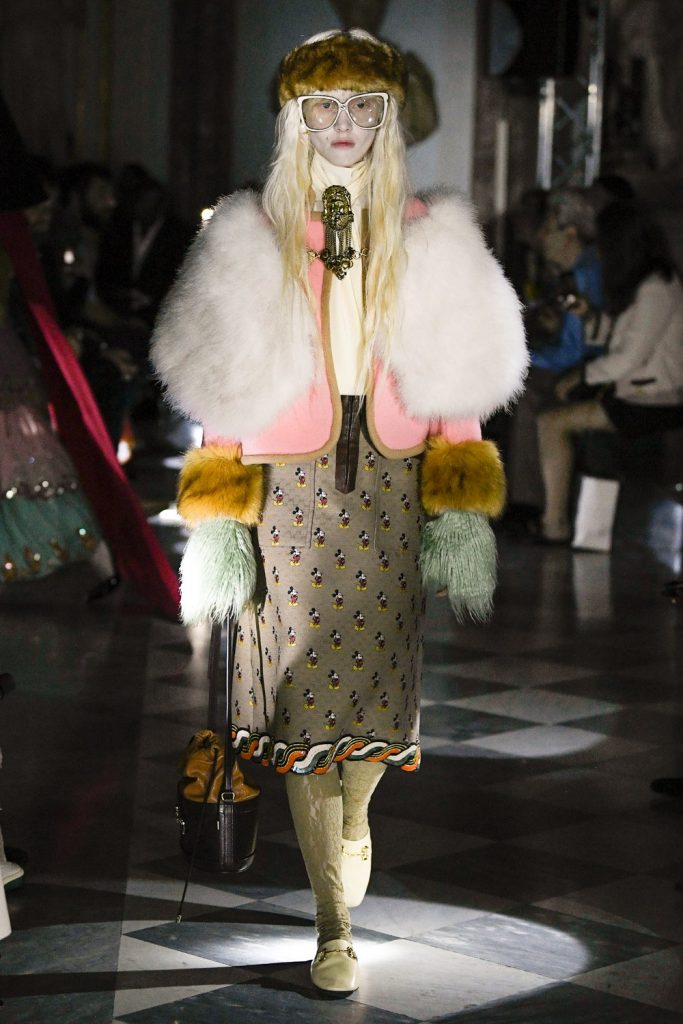 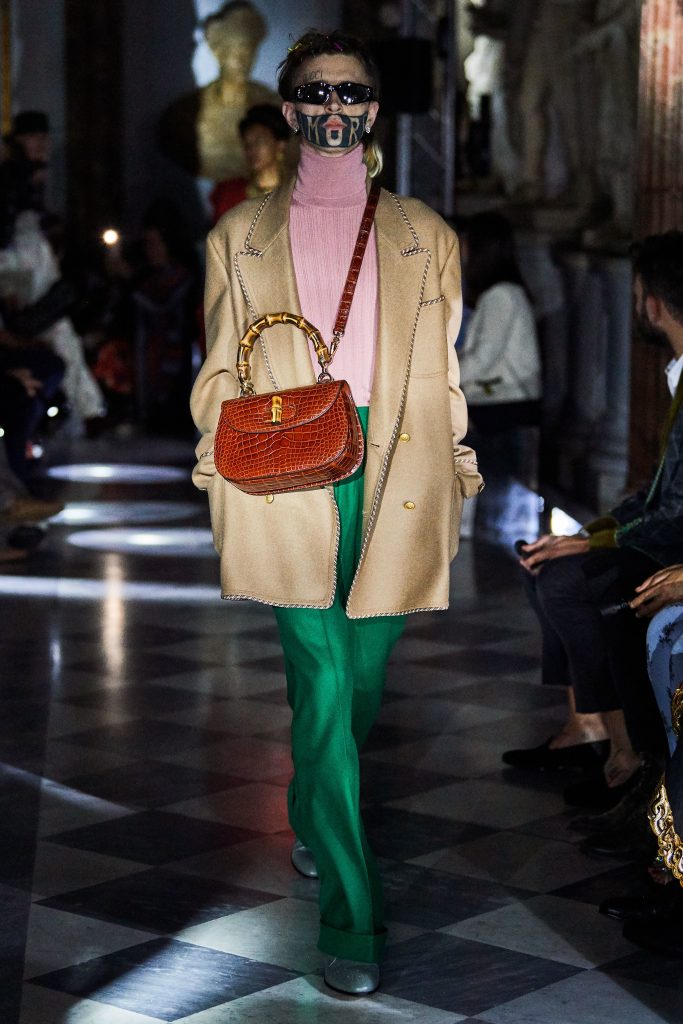 Gucci’s creative director, Alessandro Michele, has truly revitalized the label since taking over the house in 2015 and his momentum is only growing stronger. The designer staged his resort collection in Rome at the Capitolini Museum as a “hymn to freedom” that allowed him to express his belief in the idea of self-determination and gender equality.

According to an interview with Alessandro Michele, published in WWD, the resort collection” is empowering freedom of expression and, in particular, freedom of choice, supporting sexual and reproductive health and rights.” Illustrating this message, Michele posted feminist slogans like ‘My body, my choice.’ as well as ‘Chime for Change’ on  T-shirts. In addition, he embroidered an image of the female reproductive system on a gown that was embellished with flowers. Some looks also displayed ‘May 22, 1978,’ the date that the Italian law for the social protection of motherhood and legal abortion took effect. In terms of style, the designer’s wink to the Seventies was apparent, since it was a crucial time in history for the women’s lib movement.

While Michel’s collection featured both men’s and woman’s looks, many looks were gender neutral. There were plenty of his signature magpie layered looks that have really struck a chord with millennial influencers and celebrities, as well as kitsch Mickey Mouse printed looks.

Feel free to chime in on whether you think more designers should be using their brand status to promote social justice, just as  Alessandro Michele and other designers have done in past seasons. And if so, who are your favorites?