Ah, the Met Ball—an event that has been called the Oscars of fashion. While some see this as a night to marvel at who-will-be-wearing-what-and-who, those of us with a passion for design and construction are on the edges of our seats waiting to see the featured honoree’s work up close. 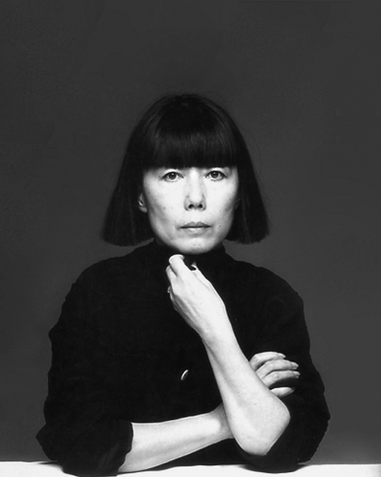 Rei Kawakubo is this year’s showcased designer and while not taking away from exhibitions past, this year’s exhibit is special. Seeing Kawakubo’s work up close gives those of us obsessed with construction a rare peek into what we might not be able to figure out from a quick walk on a faraway runway. 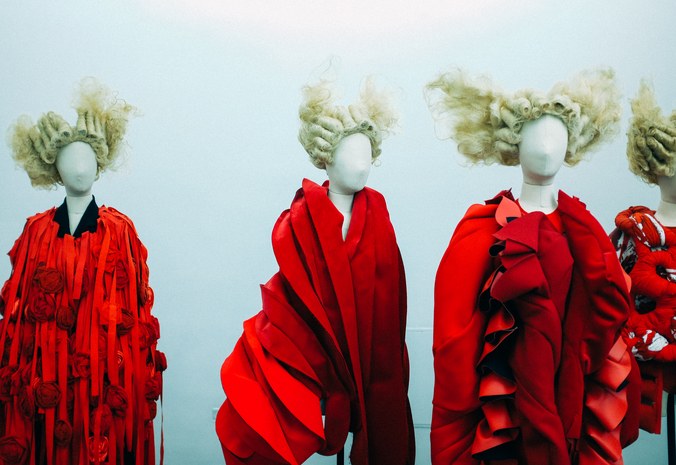 Given the unique, not-for-everybody quality of avant-garde designers’ work, we seldom see their garments worn on red carpets. So while we may have the opportunity to see Prada, Gucci or Dior gowns from a “360-degree fashion cam” on any given awards ceremony red carpet, the chance to get a complete view of Kawakubo’s work is an exciting treat.

You’re not likely to spot a traditional center seam or a side seam at Rei Kawakubo/Comme des Garçons: Art of the In-Between at the Met, but you will see experimental draping, padding, extending, wrapping and ripping that will cause you to think of fashion in terms that reach far beyond a dress that hugs the curves of the body.

And while there are many bonuses to featuring Rei Kawakubo at the Met, as fashion educators, we love that this type of exhibition sheds a spotlight on an esteemed design career, especially for those just “getting into fashion” who may not have heard of Rei Kawakubo or Comme des Garçons. 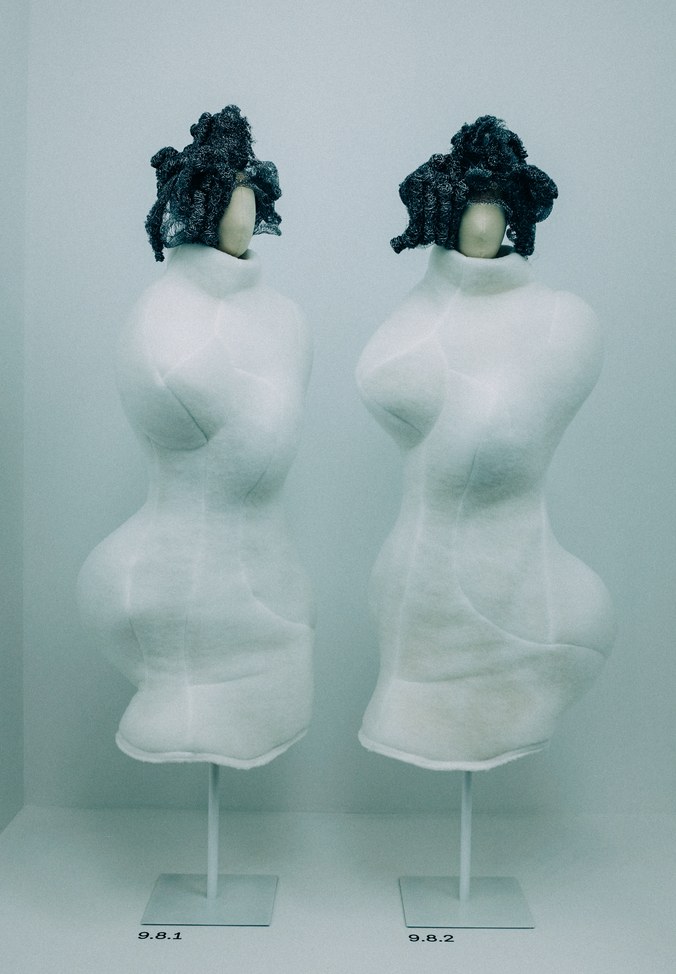 Whether Rihanna’s giant Met Ball Comme des Garçons confection was your first introduction to Rei Kawakubo or you are a long time fan, we’d like to fill you in on some Rei Kawakubo history taken straight from University of Fashion’s founder Francesa Sterlacci’s book Second Edition of the Historical Dictionary of the Fashion Industry (due out this summer), as you prepare to visit the exhibit or build your personal bank of design knowledge.

Born in Tokyo in 1942, Rei Kawakubo is a Japanese designer who “is” Comme des Garçons. Kawakubo’s vision of the human form is very different from that of her Western designer contemporaries and gave birth to a view the fashion world had never dreamed of – one that outraged many in the fashion industry and yet inspired many more. Referred to in Japan as “Garçons” and in France as “Comme des,” Comme des Garçons (which means “like boys”) reflected Kawakubo’s criticism of society’s view of women and fashion. 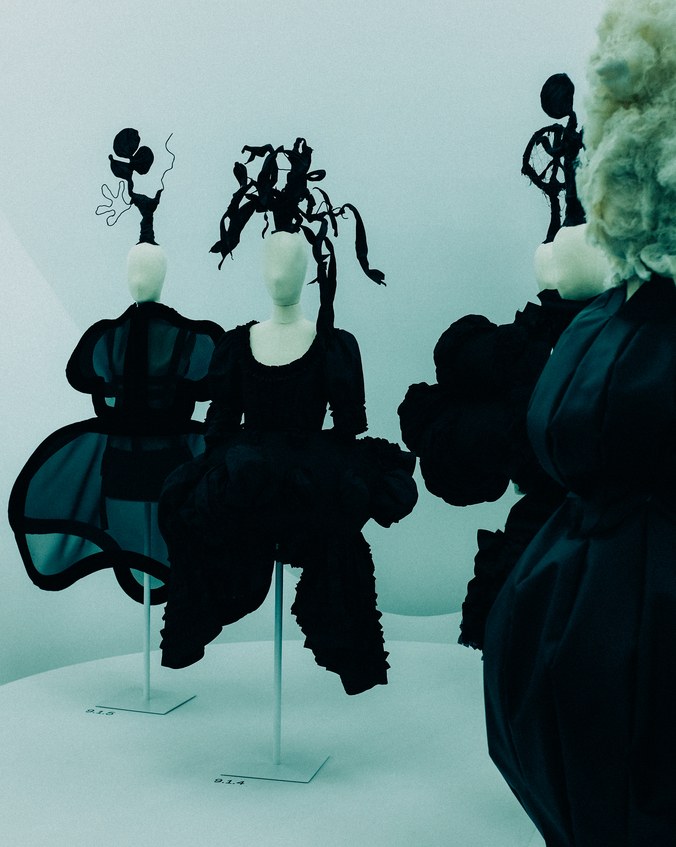 Her designs have always celebrated, and appealed to, strong, independent women. Without any formal training in fashion design, Kawakubo began making clothes under the Comme des Garçons label in 1969 and opened her first boutique in Tokyo in the mid-1970s. In 1981, Kawakubo made fashion history at her Paris debut, with knitwear that used holes and tears to make an anti-fashion statement. By the close of the decade, she had developed a furniture line and a magazine; later, she added fragrances, handbags and other products.

Kawakubo’s mastery of line and form transforms her garments into works of art, and her work has been the subject of numerous museum and gallery shows, which now includes the Met in NYC. She has collaborated with artists as diverse as Mick Jagger, Cindy Sherman and Ai Weiwei. 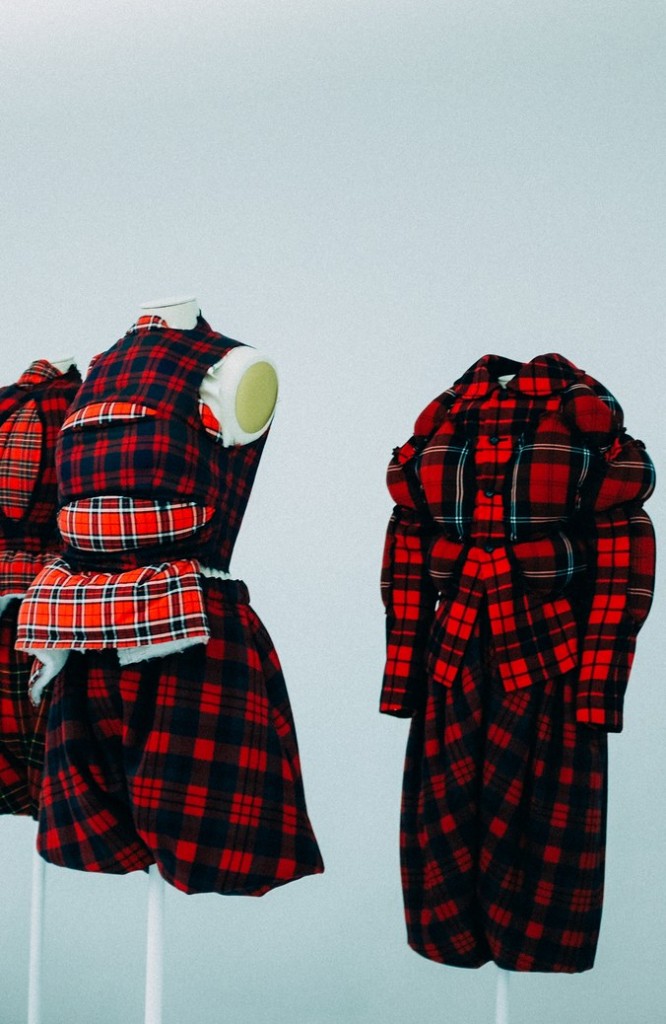 She is credited with helping Japanese designers gain acceptance in the French fashion world. In 1997, she was awarded an honorary degree from the Royal College of Art, London, and she has received many awards in the U.S., France and Japan. Kawakubo remains the creative director and sole owner of the Comme des Garçons brand, which as of 2015 had 17 different lines, hundreds of stores and annual sales of approximately $250 million. Four of the stores specialize in avant-garde menswear and are branded as Dover Street Market, the first of which opened in London in 2004.

Rei Kawakubo embraces unevenness and imperfection, while simultaneously creating beautiful clothing. She has collaborated with other designers including Junya Watanabe, Tao Kurihara, Fumito Ganryu and Kei Ninomiya. In 2009, Comme des Garçons launched a diffusion line called “Black.” The company has also collaborated with various other brands such as Converse All Star, Lacoste, Levi Strauss, Louis Vuitton, Speedo and in 2014, with fast fashion retailer H&M. Kawabubo, now in her seventies, claims that she is never retiring—a sentiment we love.

Because no Met Ball would be complete without a red (or in this case, multi-colored) carpet review, we will leave you with those we felt did Rei Kawakubo proud. Celebrities that wore Comme des Garçons top our list including Helen Lasichanh, Pharrell Williams, Tracee Ellis Ross and Rihanna as pictured in the header above. 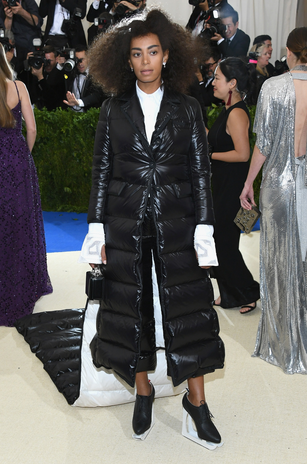 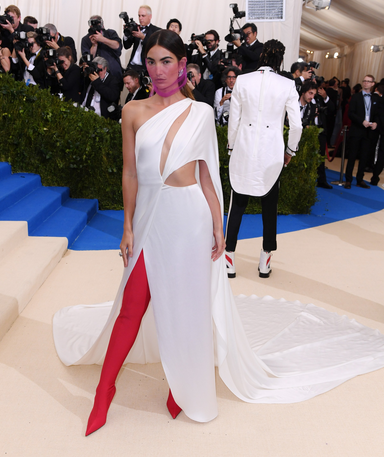 Missing the mark big time (not in terms of garments, but certainly in terms of honoring and understanding Kawakubo’s aesthetic and vision) were Gisele Bündchen (one of the hosts of the event), Selena Gomez and Jennifer Lopez. Let us know your hits and misses in the comments below…