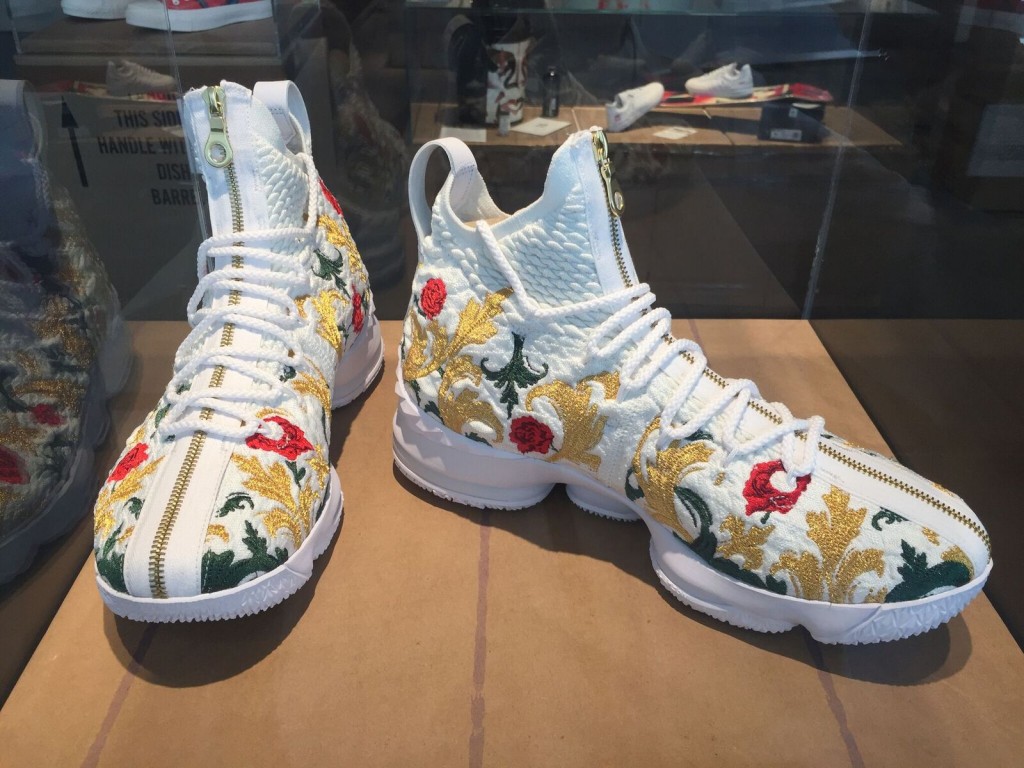 This summer, the rarest, most coveted sneaker collaborations were on view on Park Avenue at the Tongue + Chic, Sneakers  X Artists exhibition. The exhibition ran for only about a month and a half, and we were lucky to make it in before the closing date of August 31. Sneakerheads came from near and far (and formed lines around the block) just to get a glimpse of famous collaborations between Nike, Converse, Puma, Reebok and various artists and influencers.

Much like the collaborations behind the on-view kicks themselves, there was more meaning behind the exhibition than simply the latest must-have drop in the ever expanding sneaker realm. In fact, the goal of the exhibition was to bring awareness (and money) to the issue of eradicating modern slavery in the fashion industry. One-offs of the sneakers on view are currently being auctioned off in an effort to raise money for the cause.

The Thomson Reuters Foundation is the force behind both this exhibition and the subsequent auction in conjunction with Phillips auction house. To kick off the campaign, the Thomson Reuters Foundation sent Jacques Slade, a YouTuber with almost a million followers and a love of unboxing the newest, hottest sneakers, a specially designed and manufactured pair. Take a look:

Both Slade (and most likely, most viewers) took pause upon realizing that the love of and devotion to sneaker culture could be supporting unfair labor practices throughout the world. So what better to way to get Sneakerheads to question how they spend their sneaker allowances than to draw them into the cause with collaborations they’ve likely coveted—all neatly displayed in one NYC exhibit.

The exhibition itself was like walking through time and history, not only stopping to think of the impact iconic sneaker styles have had on our culture, but also how culture has shaped new iterations of the sneakers we all know and love. Almost as if starting with a set of blank canvases, the exhibit opened with the four most commonly used sneaker styles for collaborations, including the Nike Air Force 1, Nike SB Dunk, Converse All Star and the Reebok InstaPump Fury. 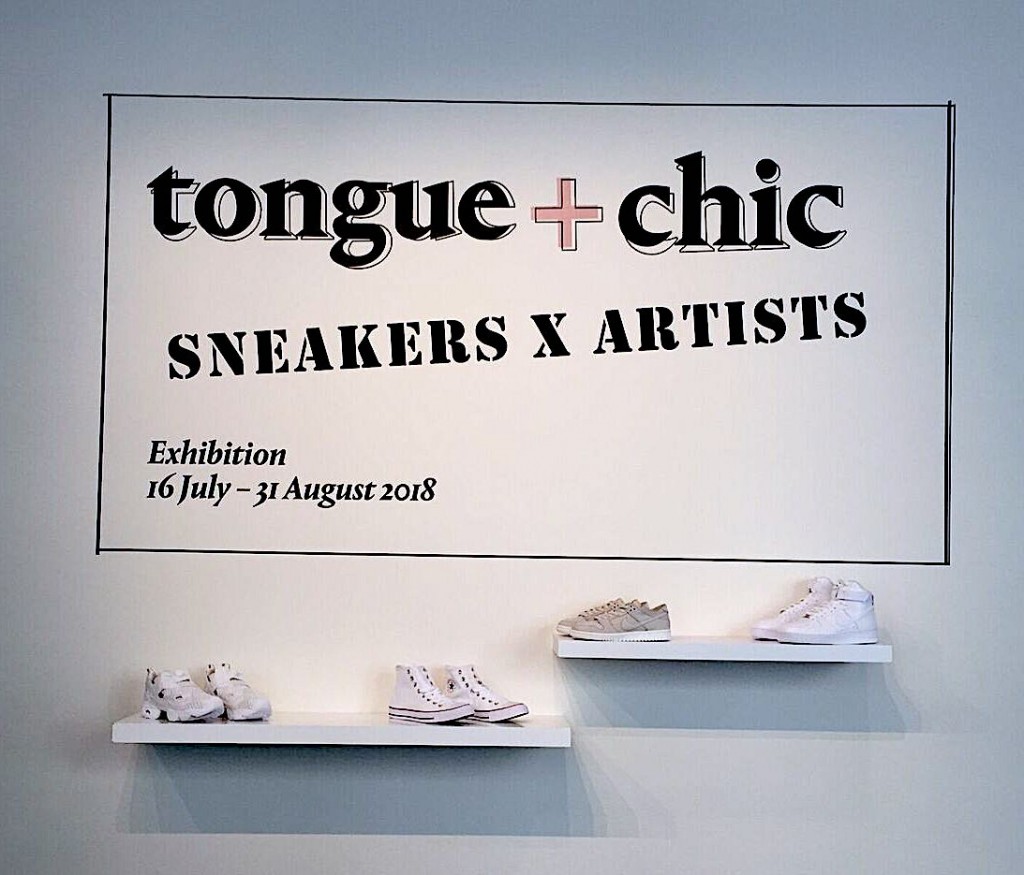 Packaging boxes served as display cases, giving Sneakerheads that rush of receiving the latest drop at their doorstep or better yet, the zing of getting the hottest styles before they can even be unboxed and hit the sales floor. Descriptions of collaborations where printed on what could be printer paper from a sneaker fan’s desk drawer—indicating that, in the sneaker world, there’s not a whole lot of time for extra branding and build up. Loyal Sneakerheads are all about the shoes themselves—just give them the when, where and how in order to get their hands on the latest pair.

To use a little Sneakerhead lingo—if you weren’t able to cop a place in line for Tongue + Cheek, we’ll share our G.O.A.T.s… 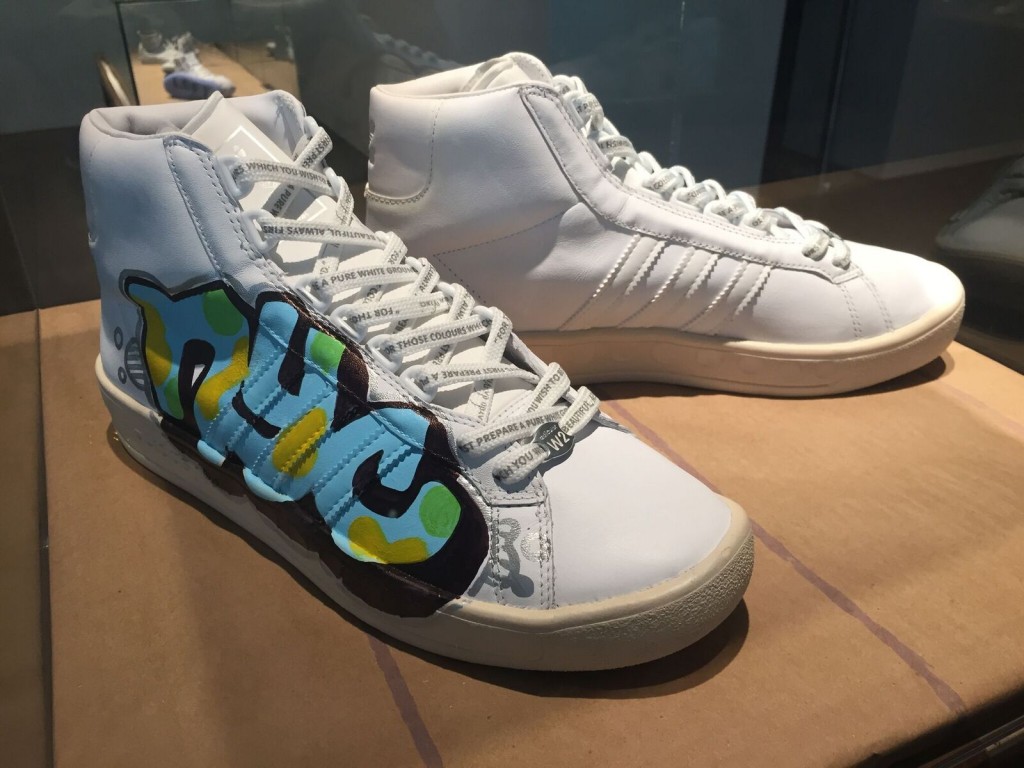 Nothing says NYC like NY graffiti artist and founding Creative Director of Def Jam Recordings, Cey Adams. This one-of-a-kind pair was hand painted by Adams (in 2006) who worked with hip hop artists like the Beastie Boys, Run-DMC and Jay Z. 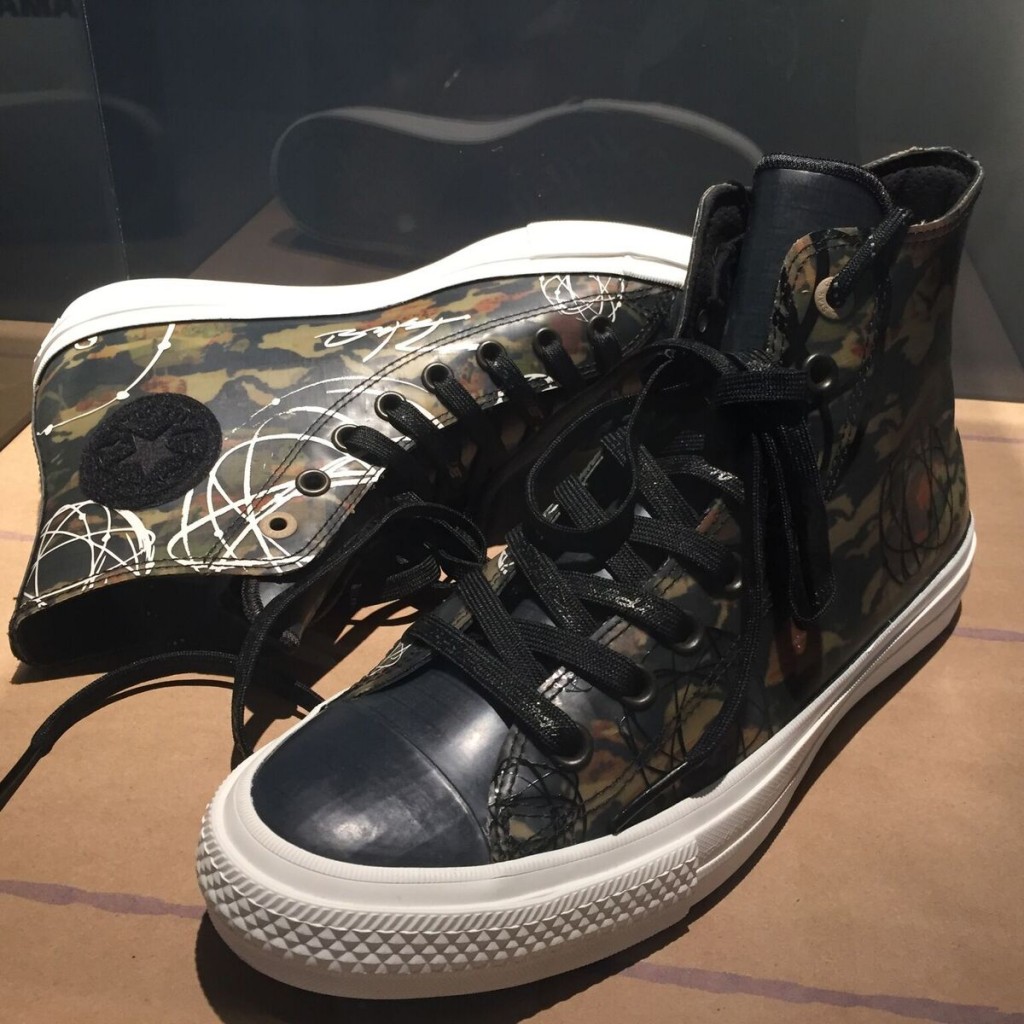 Another NY graffiti artist, Futura, who gained popularity in the late 1970s and early 1980s immortalized his signature text and abstract imagery on these Converse All  Stars in 2016. 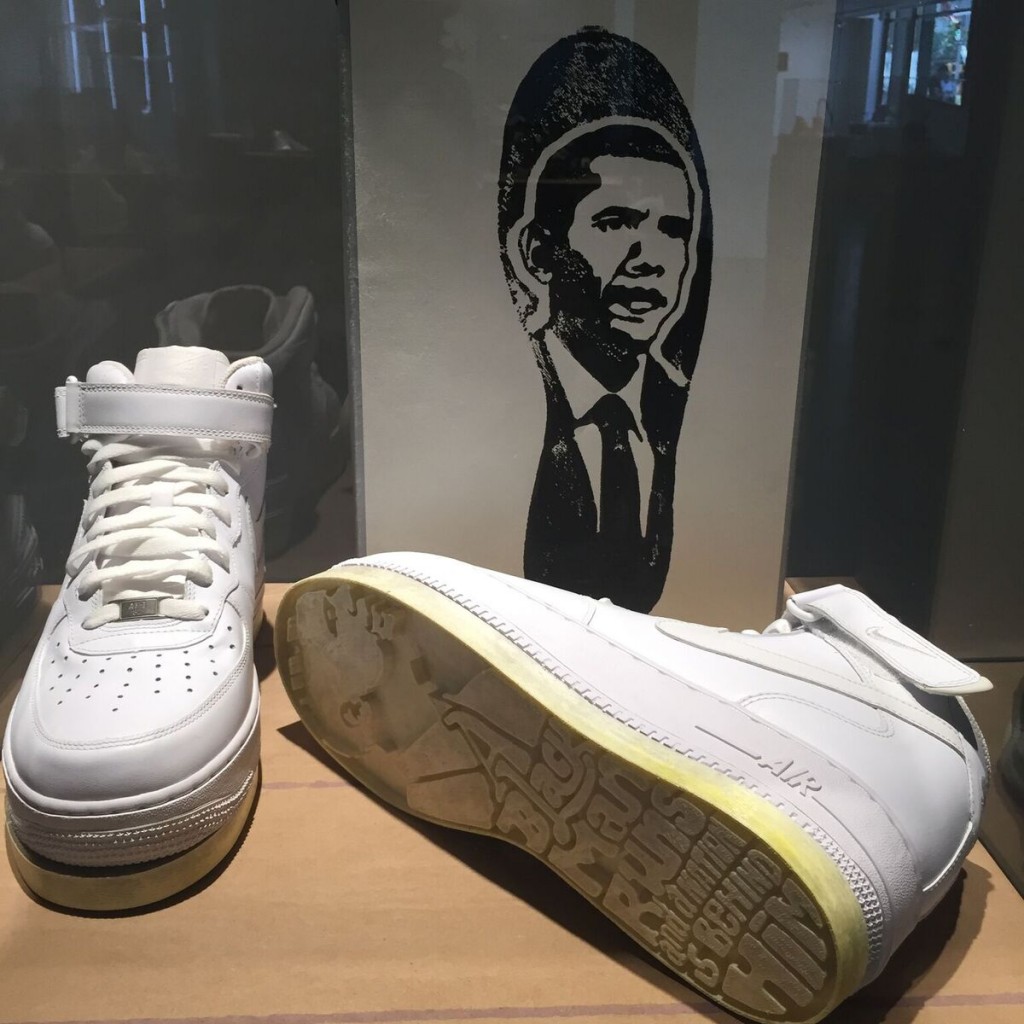 Talk about a sneaker with sole. As if it were possible to make Nike Air Force 1s even more iconic, the Creative Director at Wieden + Kennedy, Jimm Lasser has done it with these sneakers commemorating Obama’s 2008 presidency win. Can you imagine following in the wearer’s footsteps on a rainy day? 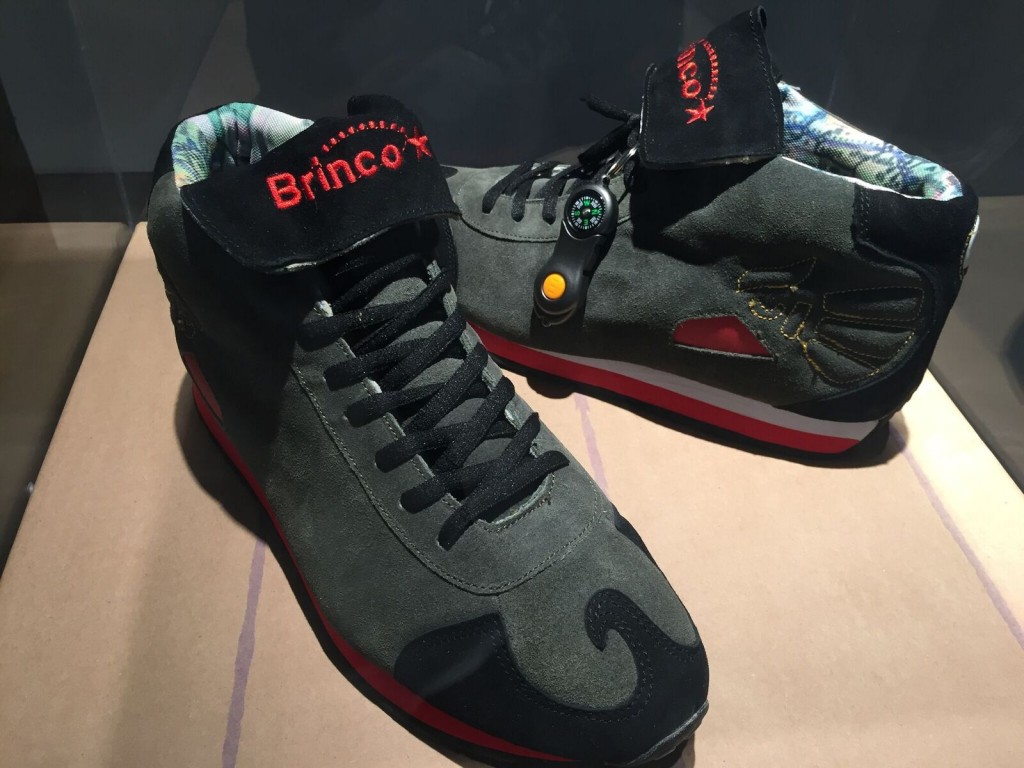 In a rare non-collaboration with a well-known brand, Judi Werthein tackles a hot button issue of today, only back in 2005. This conceptual artist created these sneakers to help immigrants cross the border from Mexico to San Diego. Each pair comes complete with a compass, light and pain killers in case of injury. Removable soles contain printed maps. The designer handed these cross-trainers out to immigrants at the border in 2005. 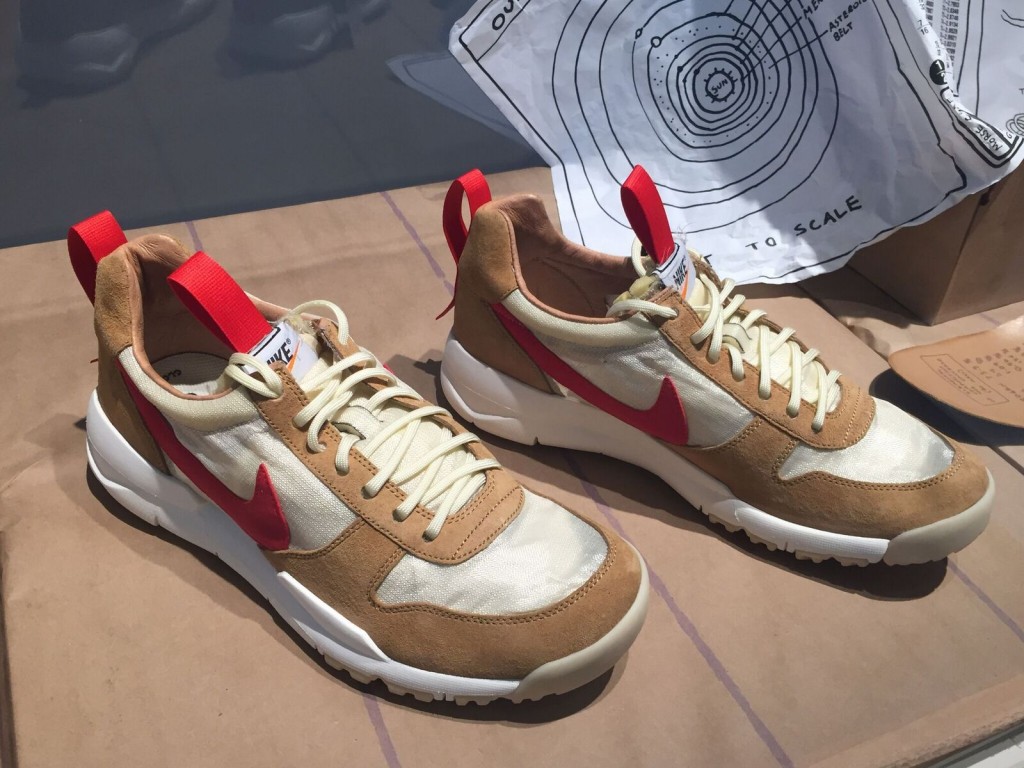 A champion for the maker movement, Tom Sachs heads up NikeCraft, an exploration in handmade vs. factory produced goods. These sneakers are made from the fabric used for the airbags on the Mars Excursion Rover.

We wish you had the opportunity to walk a mile in our shoes when it comes to this exhibit, but if you weren’t able to cop a ticket to this exclusive (and short lasting) show, see all 20 collaborations featured here. And we are dying to know…how much of a Sneakerhead are you? Placing any bids? If so, share below!