No one appreciates, more than I, what it means when a major department store decides to showcase your work, because once upon a time, that designer was me. During the 1980s, I was fortunate enough to have my own business, Francesca Sterlacci Ltd., built on a shoestring. I’m proud to say that for 10 years I had the support of many great stores and was fortunate to have my clothes featured in store windows, at  perrsonal appearances and sold in prestigious NY stores including Saks, Bloomingdales, Barney’s, Bendels, Bergdorf’s and Bonwit’s (known in the day as the 5 ‘Bs’). So you can imagine how special it was for me on Saturday September 8, when I took time out to meet a few emerging designers on Bergdorf’s 6th floor Modernist shop. One of the big questions our University of Fashion subscribers ask us is, “will I be able to market and sell my designs to stores?” Well, after seeing and meeting the designers that you are about to read about, and by talking with Madison Nagy, Assitant Buyer for BG’s Advanced Designer department, the answer is yes, but “You have got to be different.”

Let’s take a look at what that means. 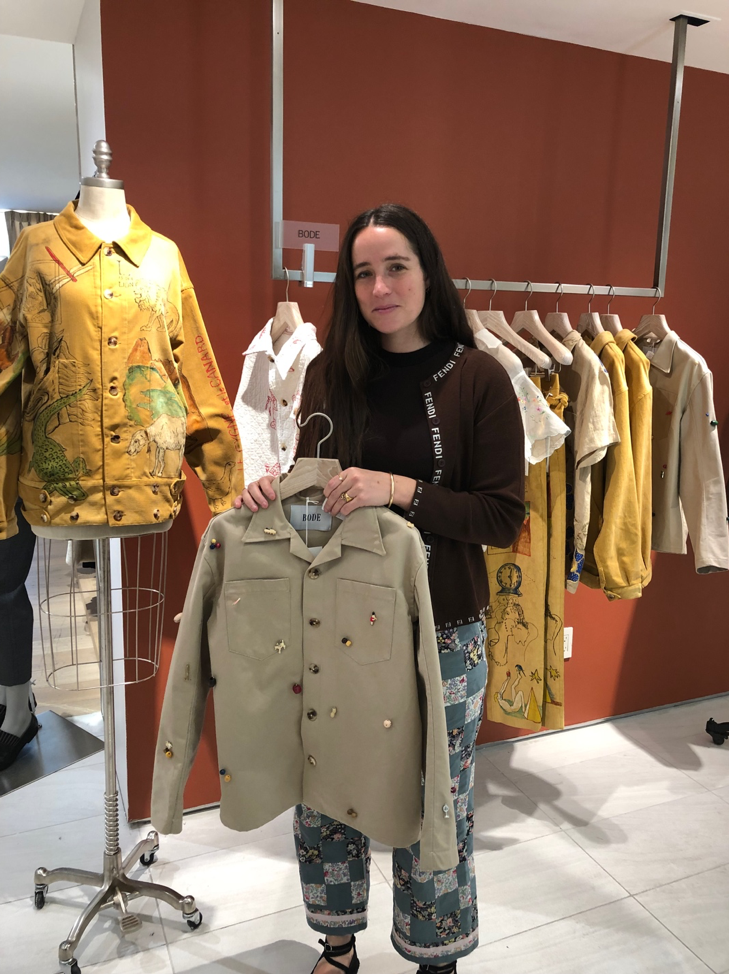 Bode (pronounced Bow-Dee) is a luxury unisex RTW brand created by Atlanta-born designer and Parsons grad, Emily Adams Bode. The brand launched in 2016 and Bode took off! The brand began with one-of-a-kind garments composed entirely of antiques textiles and continues to envigorate American menswear through the art of storytelling. Each piece tells a story and is tailor-made in New York. Her work expresses a sentimentality for the past through the study of personal narratives and historical techniques. Modern workwear silhouettes united with female-centric traditions of quilting, mending, and applique shape the collection. The collection is organized around that single simple rule: slow fashion is better.

Bode was the first female designer to show at NYFW: Men’s and had her first runway show in Paris in June 2019. She was named as a finalist in the LVMH Prize for young fashion designers, was recently the winner of the CFDA/Vogue Fashion Fund and Emily Bode was even included in Forbes’ 30 under 30 list. Click on the link to see one of Bode’s fashion presentations: https://www.youtube.com/watch?v=gmZk8R7zGn0 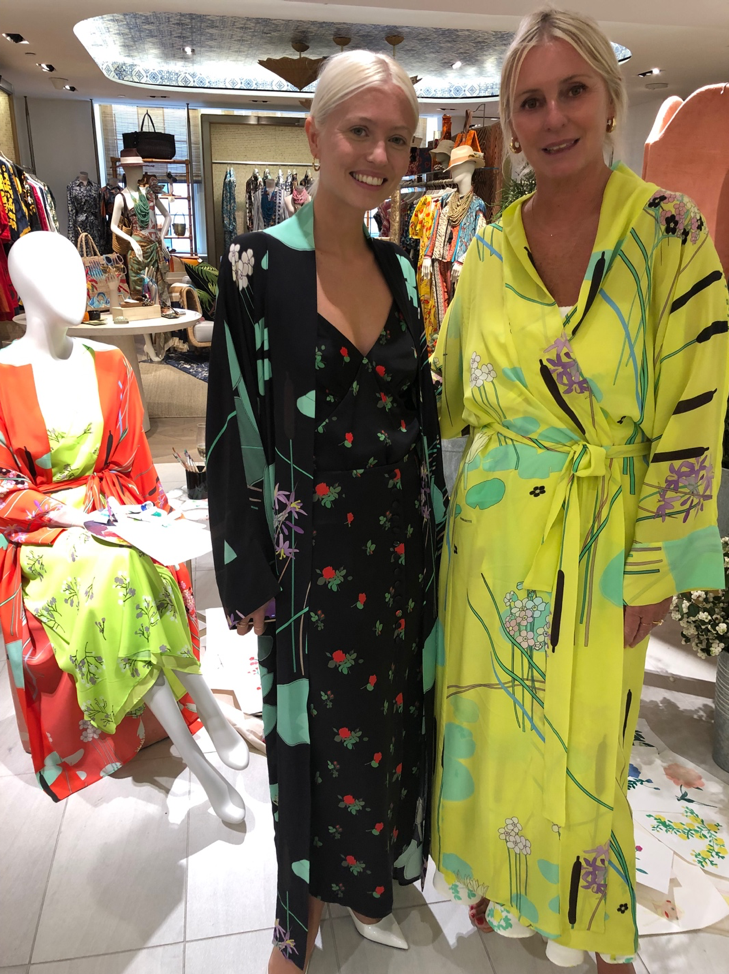 Bernadette is luxury ready-to-wear label based in Antwerp by mother and daughter Bernadette and Charlotte De Geyter. Their collections are defined by easy-to-wear silk dresses and refreshing prints, designed exclusively in-house by Charlotte who graduated with a master’s degree from Antwerp’s Royal Academy of Fine Arts. A love of nature and the arts are leitmotifs that run through Bernadette’s aesthetic. Ultra feminine, metropolitan glamour is juxtaposed with a poetic vision of a life somewhere remote and paradisal. Clean lines add a graceful note to the label’s silhouettes while colorful prints echo a timeless and free-spirited allure. Check out their website at https://www.bernadetteantwerp.com 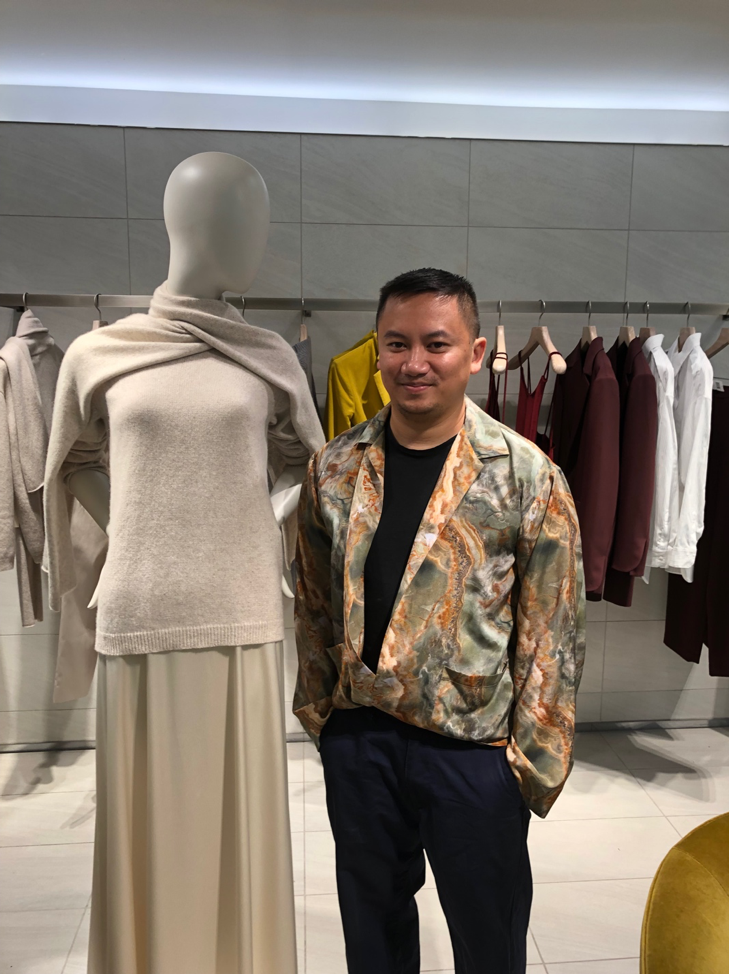 Deveaux New York was originally formed as a menswear collection by Matthew Breen and Andrea Tsao. In February 2018, Deveaux launched its womenswear collection and announced the appointment of industry veteran, photographer Tommy Ton as Creative Director. Tommy Ton is a Canadian photographer first known for his fashion blog Jak & Jil and his street style coverage of fashion weeks on Style.com and GQ.com.

With an encyclopedia knowledge of what is being worn in the streets, Tommy Ton brings a keen knowledge of the relationship between the runway and the consumer. Together with Andrea Tsao as Head Designer, as well as Matthew Breen, who heads business development, the team is comprised of a unique set of backgrounds that aspires to re-contextualize classic items in the modern world through fit, fabrication and silhouette. It explores the idea of a ‘uniform’ in an effort to make a truly authentic wardrobe. Bergdorf has the NY exclusive distribution of Deveaux for 3 seasons. Check out Deveaux New York’s website: https://deveauxnewyork.com 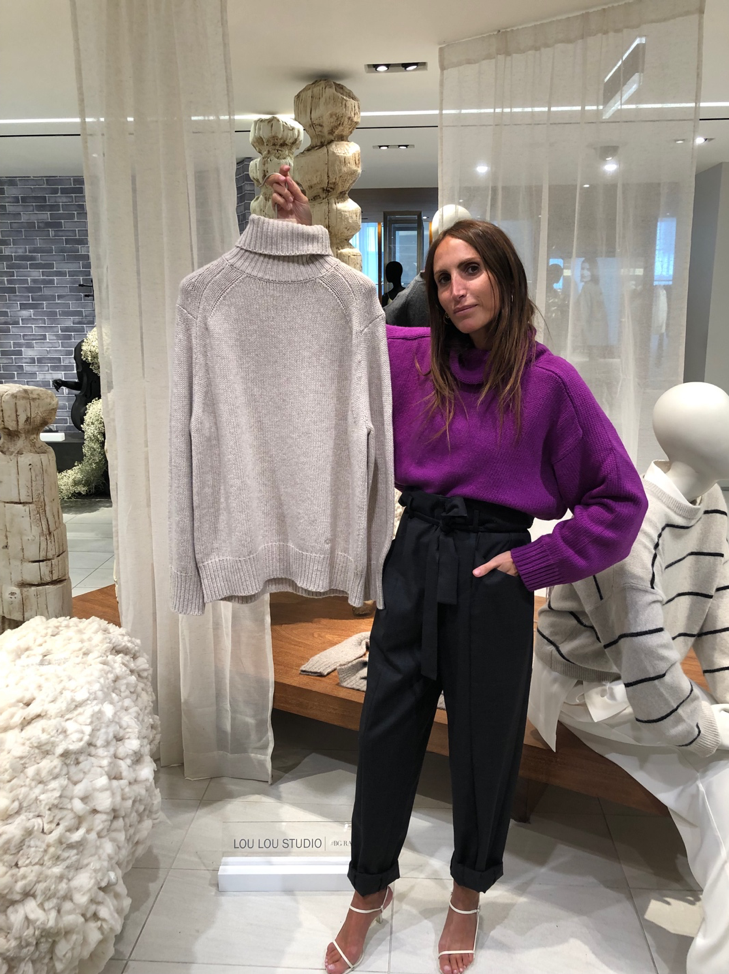 LouLou Studio is a knitwear brand created by fashion influencer/fashion consultant Chloe LouLou De Saison. Her Instagram is a glimpse into a universe which revolves around her vision of the modern Parisian woman. Chloe says of her brand, “I just wanted what I couldn’t find anywhere else: the perfect basic knit with a twist, but also good quality clothes at affordable prices. Everything revolves around well-being. Our pieces are designed to make life easier for women. Putting on a nice sweater in the morning is comforting and reassuring. We want to arouse this feeling with our knitwear collections.” Bergdorf has the NY exclusive distribution of LouLou for 3 seasons. See more of LouLou Studio at https://louloustudio.fr/en/ 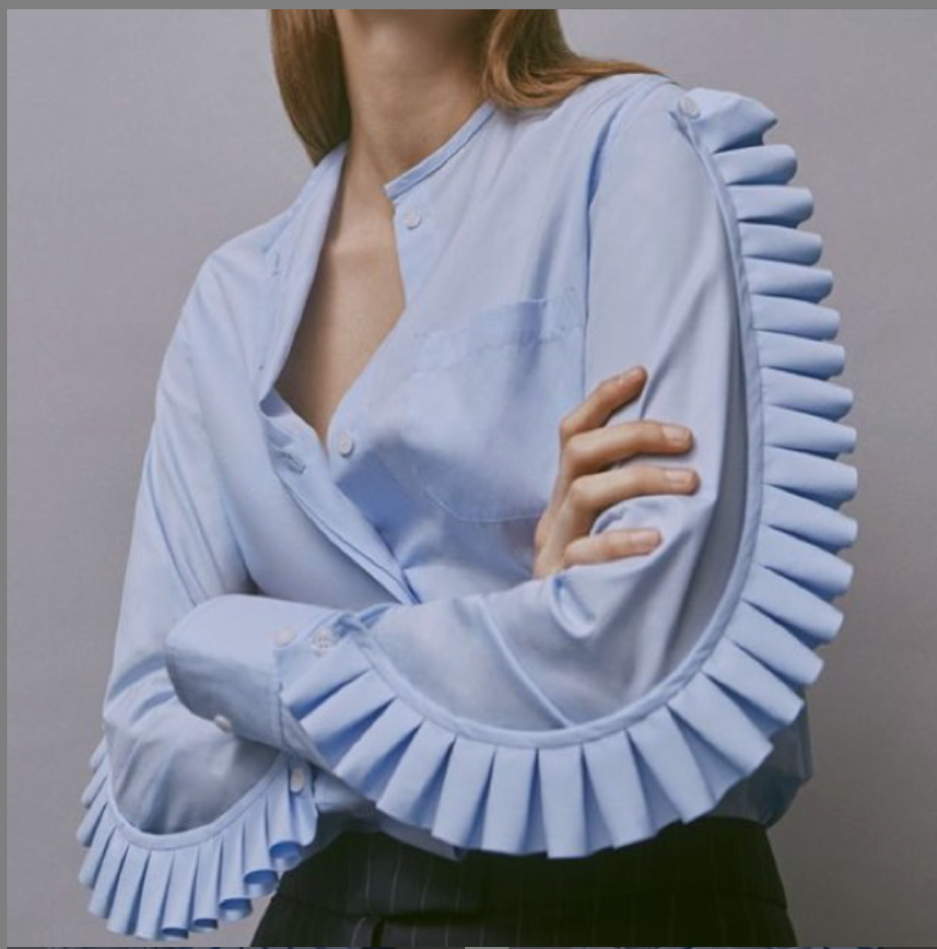 Coperni– a luxury women’s wear collection launched by former Courrèges designers Sébastien Meyer and Arnaud Vaillant on Instagram this Fall – check out the interactive display to watch the Choose-Your-Own-Adventure inspired video series! Coperni takes its name from Nicolaus Copernicus. “He revolutionized astronomy and we were inspired by that,” says Sébastien, who met co-designer Arnaud when both were students at Mod’ Art International in Paris. Their fledgling label, which won the 2014 ANDAM Award, is at once innovative and timeless. “The most important thing for us is to make clothes that are perfectly cut and draped and that women enjoy wearing,” explains Vaillant. “We want our clients to have an emotional connection to our pieces, a real feeling, and we won’t achieve that by making collections that fall out of fashion after a season.” Coperni is currently exclusive to BG in NY. 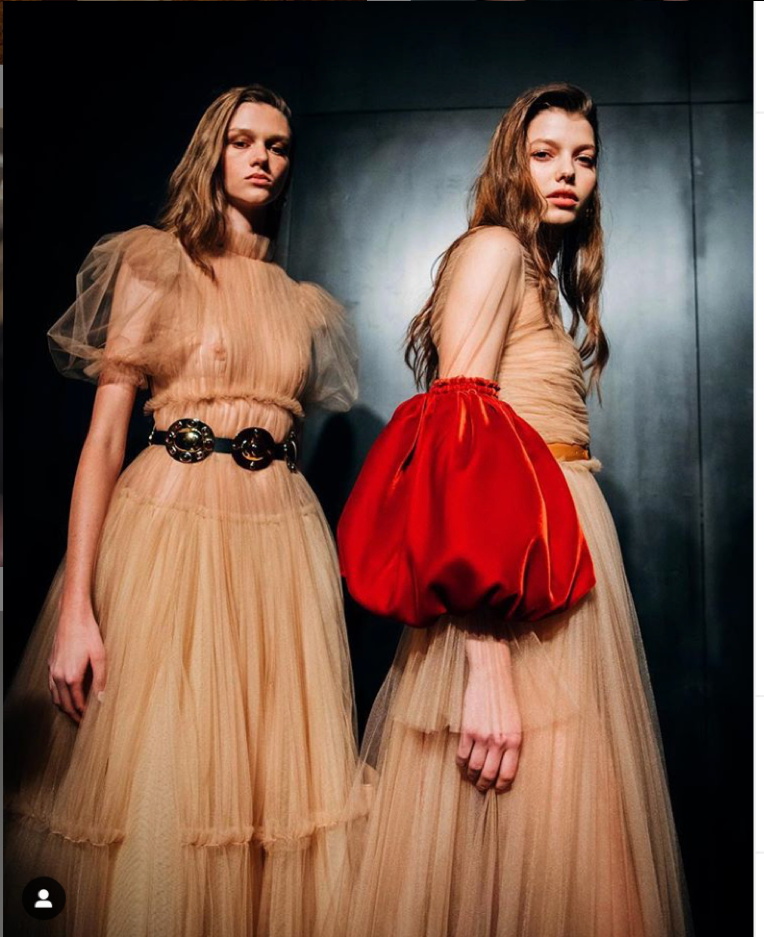 KHAITE (pronounced Kate) is a women’s RTW collection that reimagines classic American sportswear for the 21st century. Designed to be cherished, each piece proposes a fresh balance of opposing elements – past and future, masculine and feminine strength and softness, structure and fluidity – while embodying a signature sensuality and ease.

Founded in 2016 by Catherine Holstein, New York-based KHAITE evolves with each new season, building upon a foundation of robust and polished items distinguished by exceptional materials and subtle yet striking details. The collection takes its name from the Greek word (xaitn) meaning “long, flowing hair.” 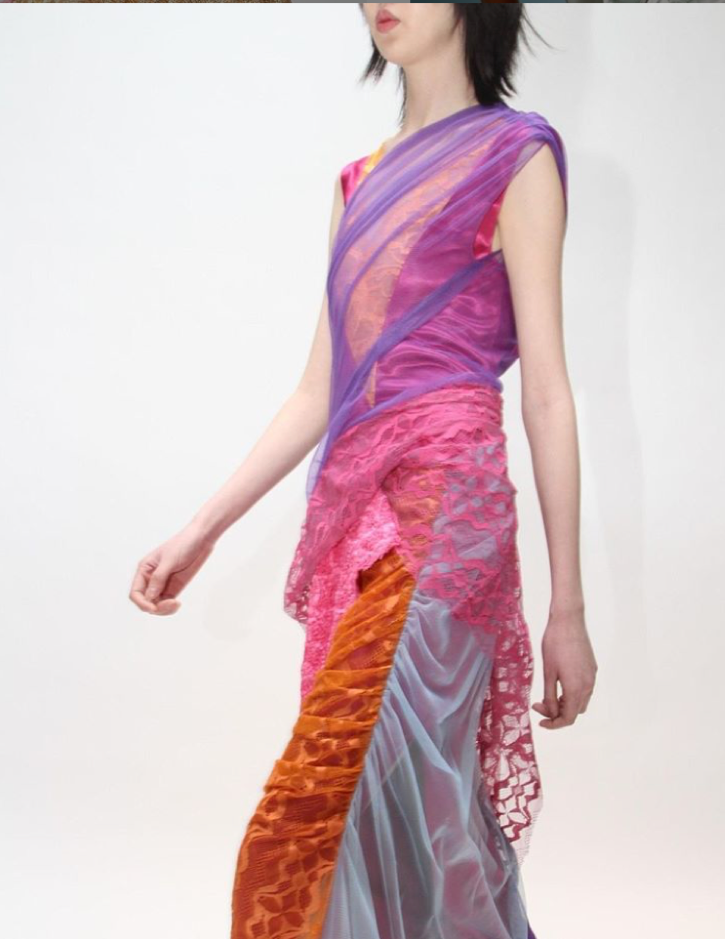 Sies Marjan (pronounced seez mar-john), is a luxury designer label established in 2016 and based in New York City. Designed by Dutch Creative Director Sander Lak, the brand evokes a narrative of color, proportion and subversive fabrication. The name Seis Marjan, signifies the first names of his father Sies, and his mother Marjan. In 3 short years, Sies Marjan has developed a strong multi-category business to include Women’s RTW, Men’s RTW, footwear and handbags soon to come. The brand has 150+ global luxury stockists including Bergdorf Goodman, MatchesFashion, Sssense and Net-a-Porter.

Sander was nominated for the CFDA Swarovski Award for emerging talent in 2017 and won the prize in 2018. He was also a nominee for the CFDA 2019 Womenswear Designer of the Year. Check out his Instagram at https://www.instagram.com/explore/tags/seismarjan/ 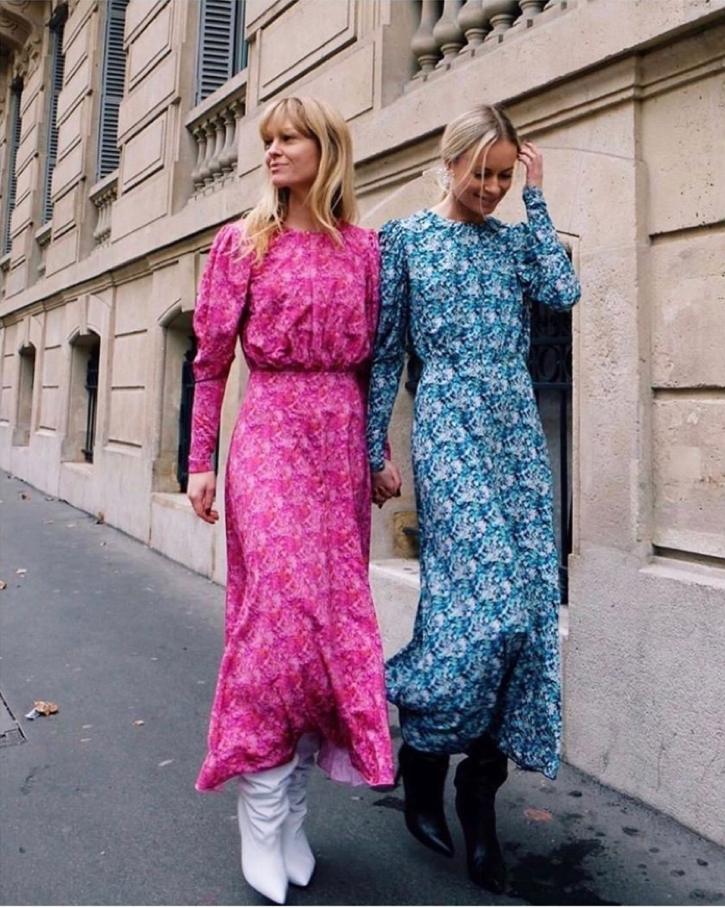 ROTATE is a Copenhagen-based brand designed by Danish stylists and influencers Jeanette Madsen and Thors Valdimars. Birger Christensen, the parent company, boasts a 150-year-old history, having opened its doors in the heart of Copenhagen in 1869. Finn Birger Christensen, a third-generation furrier, built the company by offering a well-curated collection of luxury names alongside its own brand of fur and accessories. When Denise Christensen joined the family business as chief executive officer in 2017, she initiated a new chapter in the brand’s history by opening Rotate, featuring bold prints and textiles in 80s inspired silhouettes with an emphasis on party dresses.

Check out Rotate at https://rotatebirgerchristensen.com

As NYFW marches on this week, it is nice to see attention being paid to emerging designers. Stay tuned….