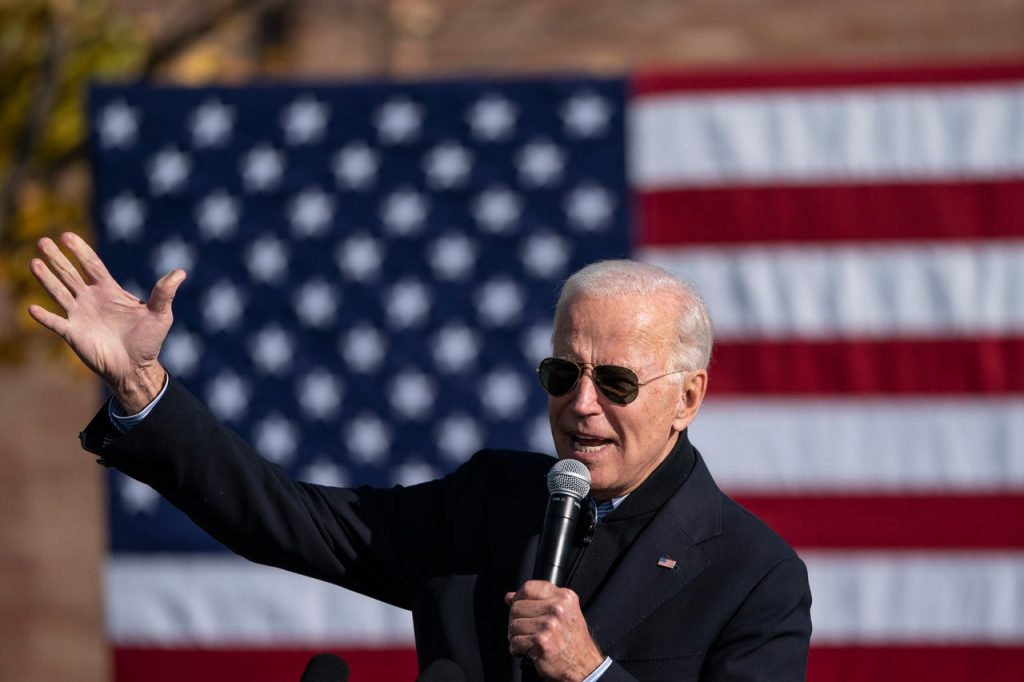 There is no denying that President Joe Biden has nailed the fashion formula throughout his campaign trail, state visits and even during his off-duty sartorial looks. Joe Biden turned 78 on Nov. 20, 2020 and has had a long and successful political career, including two terms as Vice-President of the United States (2009-2017). He is now the most powerful political figure of the United States of America and his clothing choices are being eagerly watched by the fashion industry, who are desperately in need of a shot in the arm (vaccine pun, unintended).

For the most part, men’s suits on the political stage are simply that: men’s suits and not much more. Apart from a pattern on a tie or shirt color, they all look roughly the same. But the truth is that everything from the fit of their shoulders to the size of their shirt collar matters. It can be the difference between looking put together versus wearing unbuttoned oversized baggy suits. 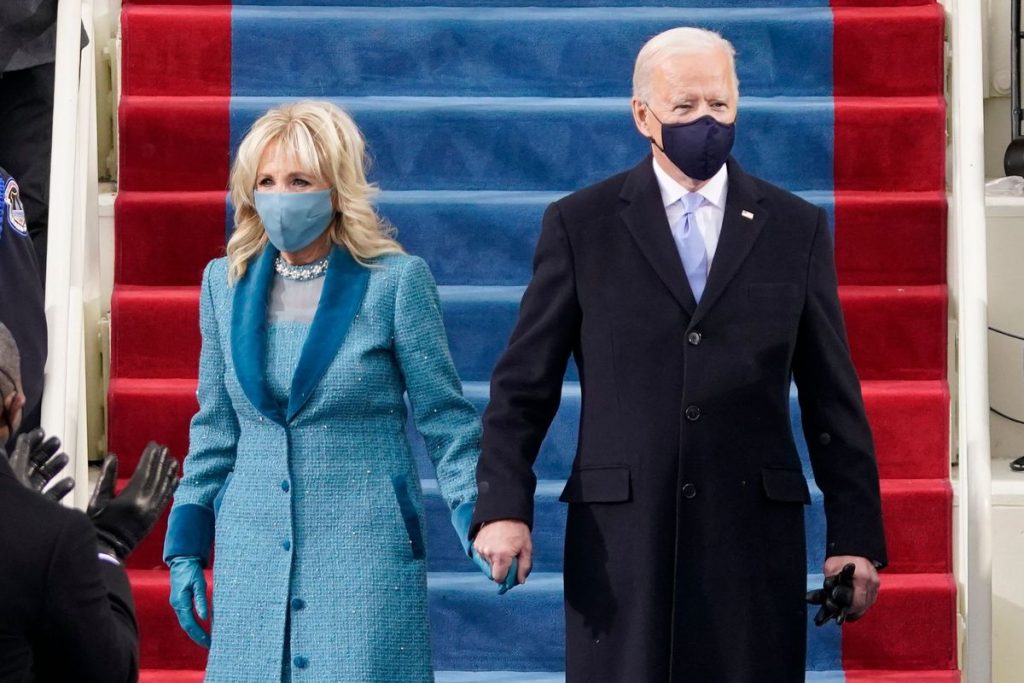 On Jan. 20, 2021, the world watched as Joe Biden was sworn in as the 46th President of the United States of America. President Biden is known for his effortless, classic American style, so it was no surprise that Ralph Lauren designed his suit for this President’s inauguration.  Before his big day, WWD published an article announcing that Ralph Lauren would be dressing the President for the inauguration. Sources stated that “Biden has been working with the designer on a suit for the historic ceremony. The custom suit will be made in the recently renamed Rochester Tailored Clothing in Rochester, N.Y., which has been making Hickey Freeman clothing for more than a century.” Throughout the years, Joe and Jill Biden have been regular Ralph Lauren customers. “You can’t go wrong wearing Ralph Lauren,” said one menswear designer to WWD.

As President Biden was sworn in, he was the epitome of classic American style. He wore a navy blue suit and overcoat by Ralph Lauren. In a WWD article, one observer commented, “ This is a symbolic sartorial statement for a return to decorum and upholding the values of America.”  President Joe Biden wore a navy, single-breasted, notch lapel, two-button suit, a crisp white dress shirt, and a pale blue tie to coordinate with First Lady Dr. Jill Biden’s Markarian coat and dress look was created by the young American designer Alexandra O’Neill. The color blue was a nod to the Democratic party, according to WWD, a symbol of trust, confidence, and stability. President Biden captured the essence of how a modern day leader of the free world would look like.

Wearing Ralph Lauren was a departure from Brooks Brothers the oldest men’s clothier, founded in 1818, who had outfitted 41 of the 46 American presidents, including Barack Obama during his inauguration in 2009. Due to their failure to adapt to the trend towards slim cut suits and business casual wear, Brooks Brothers fell into bankruptcy last year and was sold for $325 million to SPARC Group, a joint venture between Simon Property and Authentic Brands Group.

Ralph Lauren has a history of nonpartisan dressing, including moments with Michelle Obama and outgoing First Lady Melania Trump. Joe Biden even sported a classic Polo shirt recently to take both of his COVID-19 vaccinations on television.

FASHION CHOICES THROUGH THE YEARS 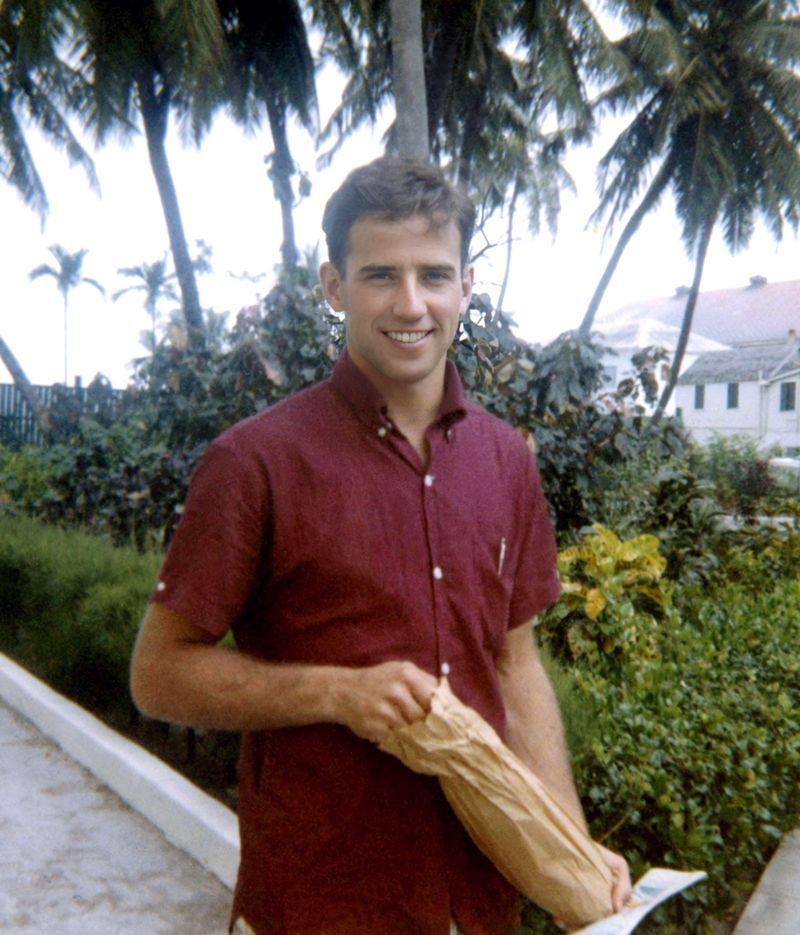 Joe Biden’s political career began in 1970 when he was first elected to a county council seat in Delaware. The law graduate and public defender worked as a senator and launched his first presidential campaign in the 1980s. In 2009, Joe Biden became the Vice President under Barack Obama, the two were a political dream team and had the cool-guy swagger that elevated the menswear game. Biden served as VP of the United States for two terms, ending his post in 2017. 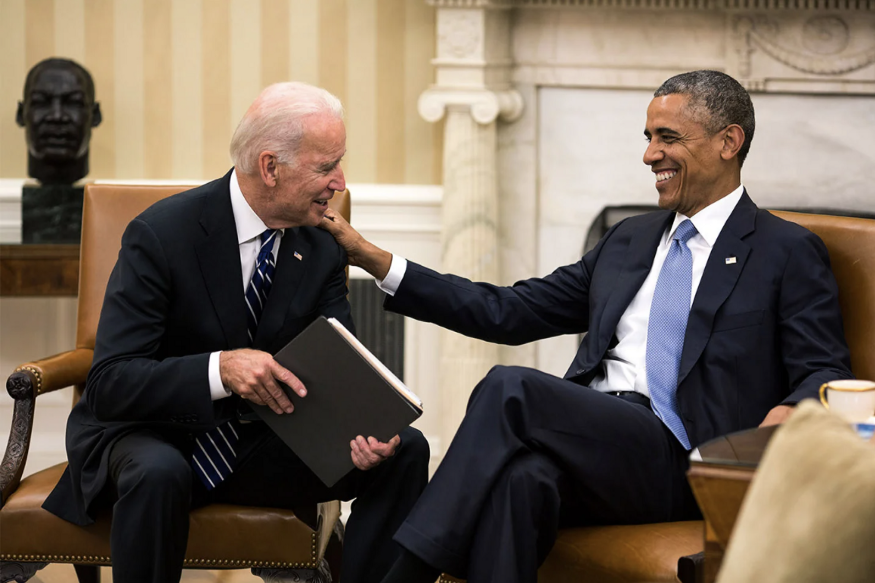 Throughout his numerous years in political office, Biden has, naturally, refined his work wardrobe, moving from bolder prints and heavier fabrics to cleaner-cut tailoring and the occasional relaxed, open-necked shirt. The President also has embraced accessories to define his style, from his signature aviator sunglasses to funky print socks. President Biden has also been seen throughout his campaign wearing a face-mask, to protect not only himself, but everyone around him. 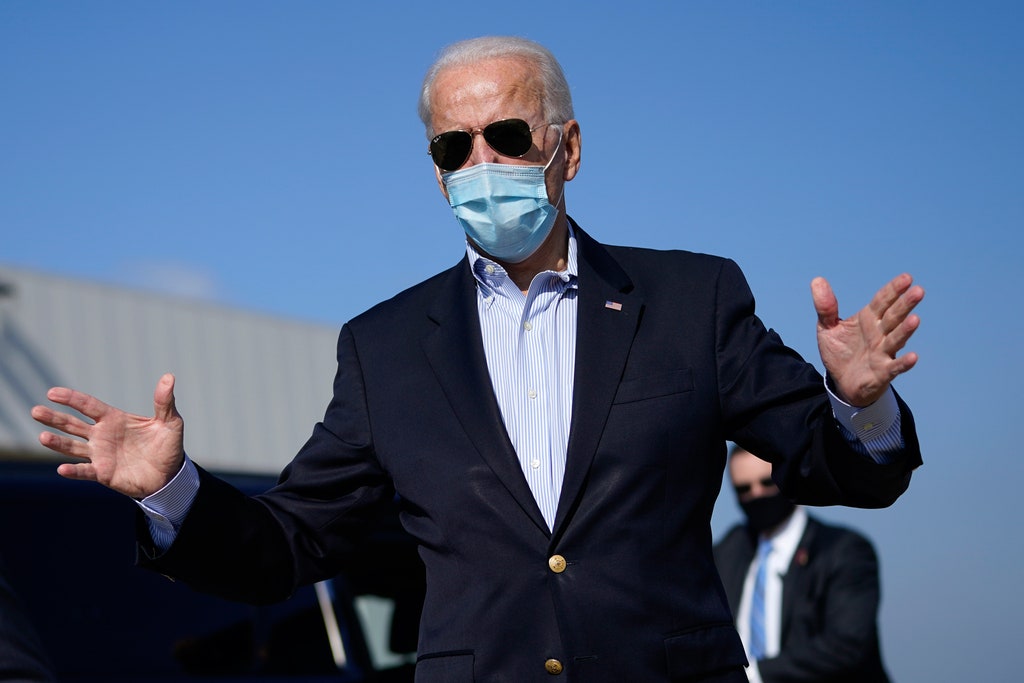 When not on the campaign trail, President Biden has also been known to dabble in leather jackets, short-sleeved shirts and his signature aviators. A relaxed preppy vibe with a modern twist. 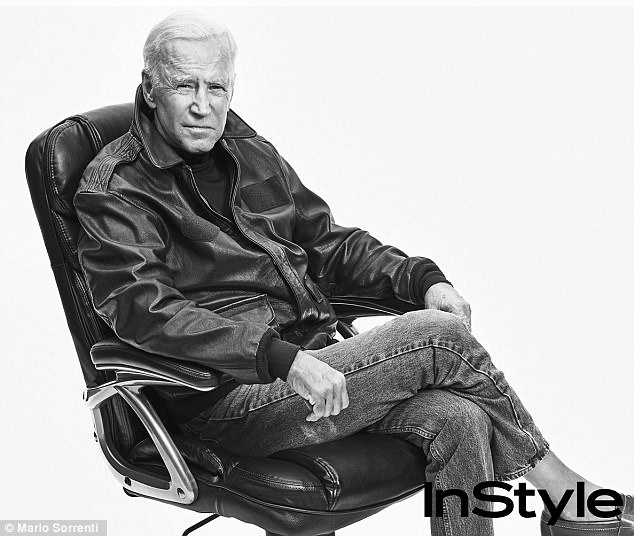 Here are some of Biden’s looks throughout the years: 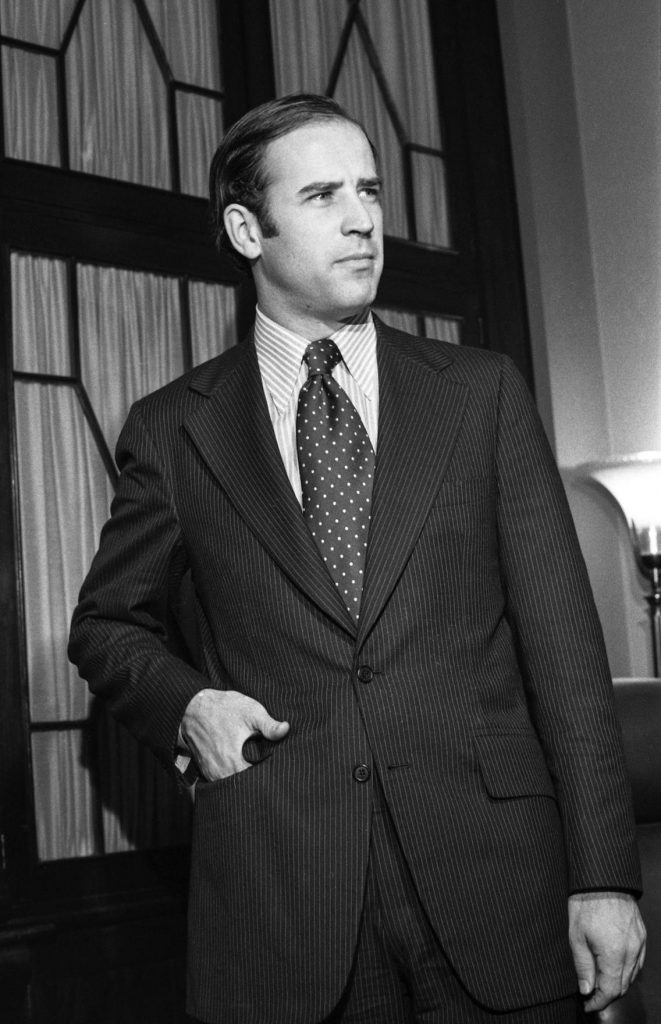 Joseph Biden, in stripes and polka dots, checks in at the office of the Secretary of the Senate on December 13, 1972. (Photo Credit: Getty Images) 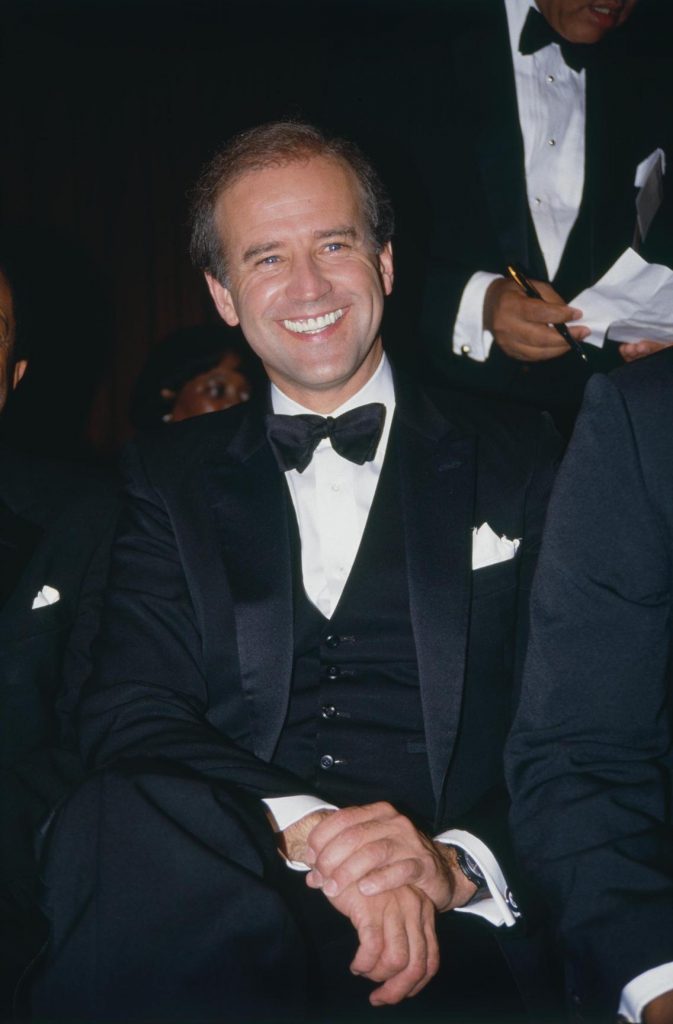 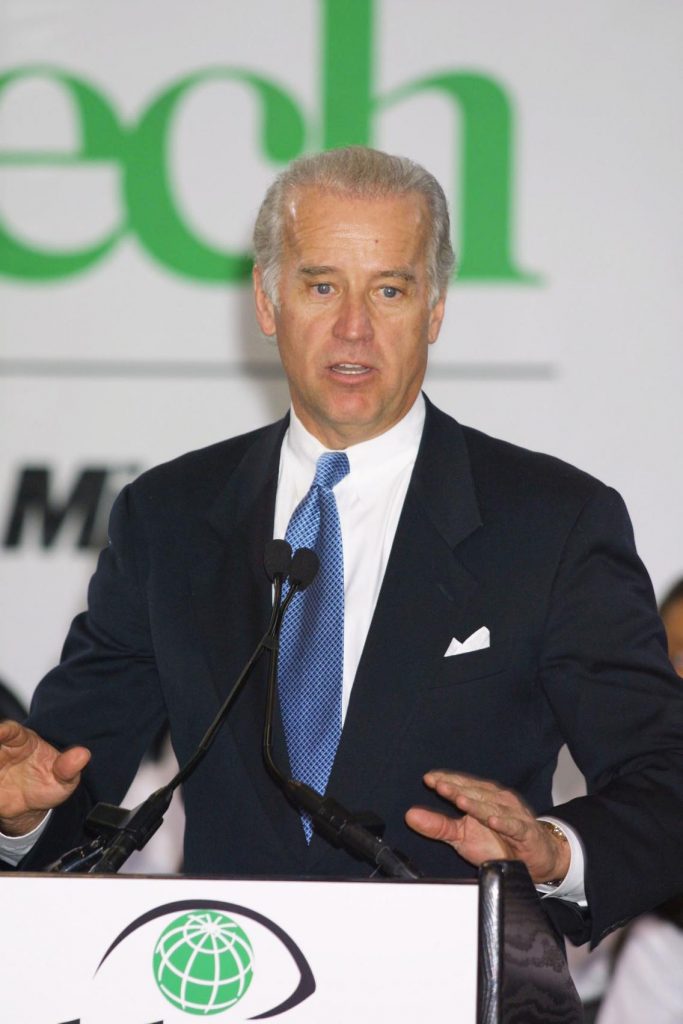 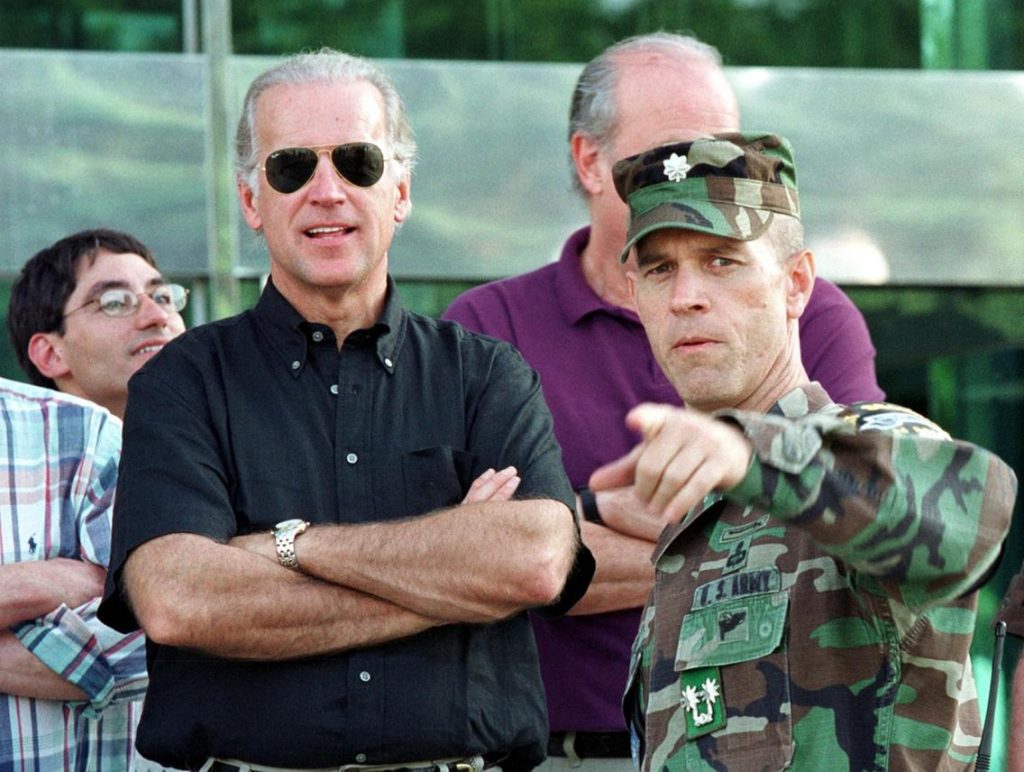 Joseph Biden, left, in a casual shirt and aviators, receives a briefing at the border village of Panmunjom, South Korea, on August 11, 2001. (Photo Credit: Getty Images) 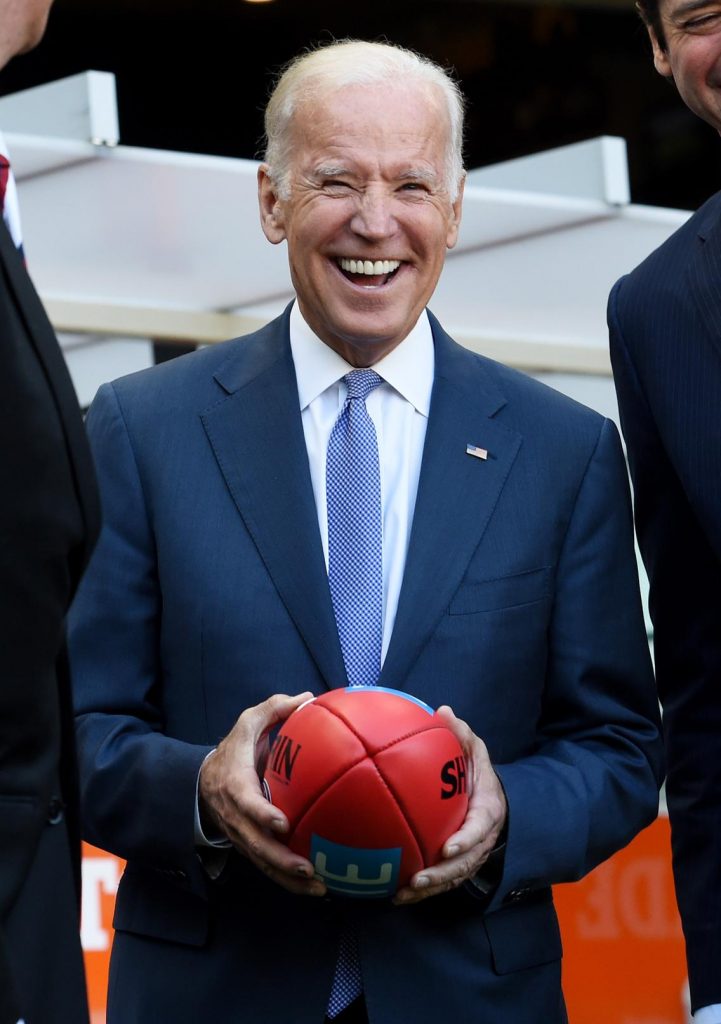 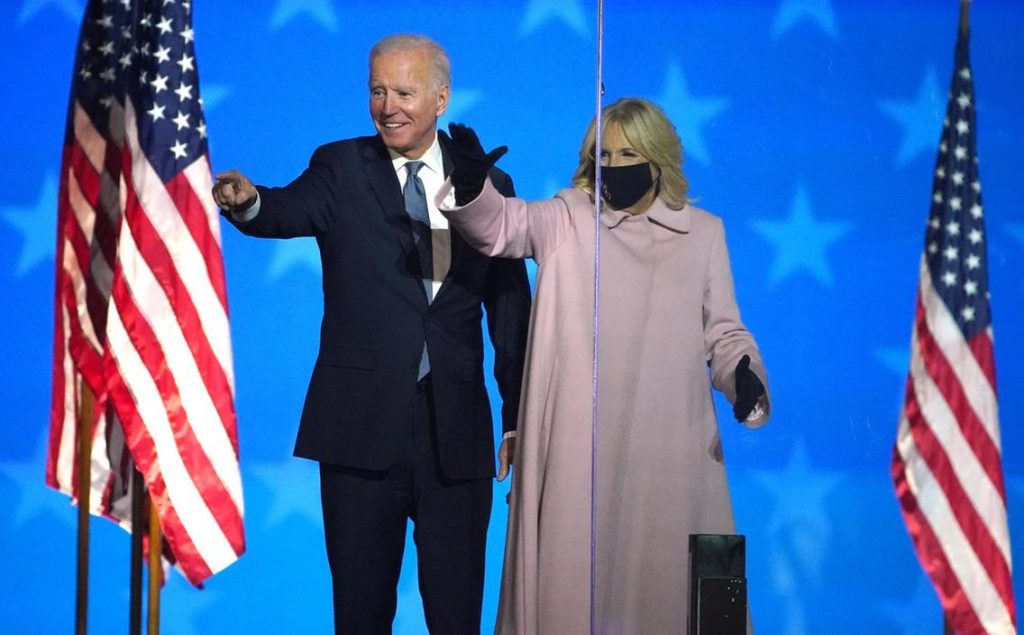 Joe Biden, in his favorite color of suit, navy, and his wife, Jill Biden, attend at his election night event at the Chase Centre in Delaware, US, on November 3, 2020. (Photo Credit: EPA)

Today, President Biden is one of the best dressed politicians in the United States. The President is known for wearing a well-tailored classic cut suit, which makes sense given his physique (slim and tall). To the unqualified eye President Biden’s suits might appear to fit a little on the large side, but the slight pull at his top button and the way the back of his jacket collar sits flush against his shirt collar indicate a well-fitted suit.

For the most part President Biden sticks to what works best for him. His suits are usually navy, although occasionally he pushes himself out of his comfort zone and wears black or khaki tones. It seems that the President also prefers to wear crisp white shirts, which give him a sleek and refined look.

President Joe Biden supports his local community. For years he has been working with his local tailor in Wilmington, Delaware and occasionally orders custom shirts from Wright & Simon, a narrow shop on Market Street. Leonard Simon, the shop’s proprietor, has plenty of selfies with the President, but Simon laughs in an interview with the local paper Northjersey.com; “The pictures are in my phone. That’s where they will stay,” said Simon, 71, whose father, Morris Simon, cofounded Wright & Simon in 1935. “I’m a small store in a small state. I have to have discretion.”

Custom suits created at Wright & Simon are beautifully tailored and fit to perfection on their clients. Leonard Simon boasts that his clients can receive a perfectly tailored suit at a fraction of the cost of a designer version. Wilmington is not a $3,000-suit kind of town. At Wright & Simon, a customer can purchase a custom fit and press suit in their tailoring shop above the store for $795. Now that’s a bargain! 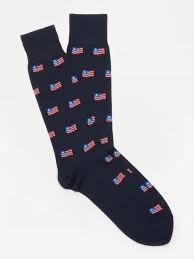 A pair of American Flag themed socks that Joe Biden has worn in the past. (Photo Credit: HuffPost)

President Biden mostly chooses his suits from his local tailor shop in Wilmington, Delaware for a moderate price, and the tailoring is impeccable; former President Trump on the other hand has his suits custom made by the Italian luxury brand Brioni for a whopping $3,000.

According to Patrick Henry, better known as LA designer/tailor ‘Fresh’, a slimmer, more tailored fit reads more youthful and modern like those worn by Biden, while a larger and more relaxed suit like that of former President Trump, may speak to a different audience.

According to Fresh, President Biden’s pants are a perfect choice for his silhouette. “Biden’s break sits right at the top of his shoe. “Even though he’s moving and walking, you can still see it hits right at the top. He’s not showing his whole sock off, he’s not trying to look super cool or like a teen, the whole leg fits great.”

“The presidency isn’t about health and physical fitness, but Biden looks like a young man, like he could go toe to toe with anyone,” he said. “He looks confident and, in my opinion, gives a look of readiness. Whereas a more conservative, looser fit looks like he might be ready to go do something else.”

FASHION AT THE WHITE HOUSE

Throughout the history of the White House, the United States has had several very fashionable first ladies and dapper presidents; from John and Jacqueline Kennedy to Barack and Michelle Obama. These political powerhouses brought style and grace to the White House. 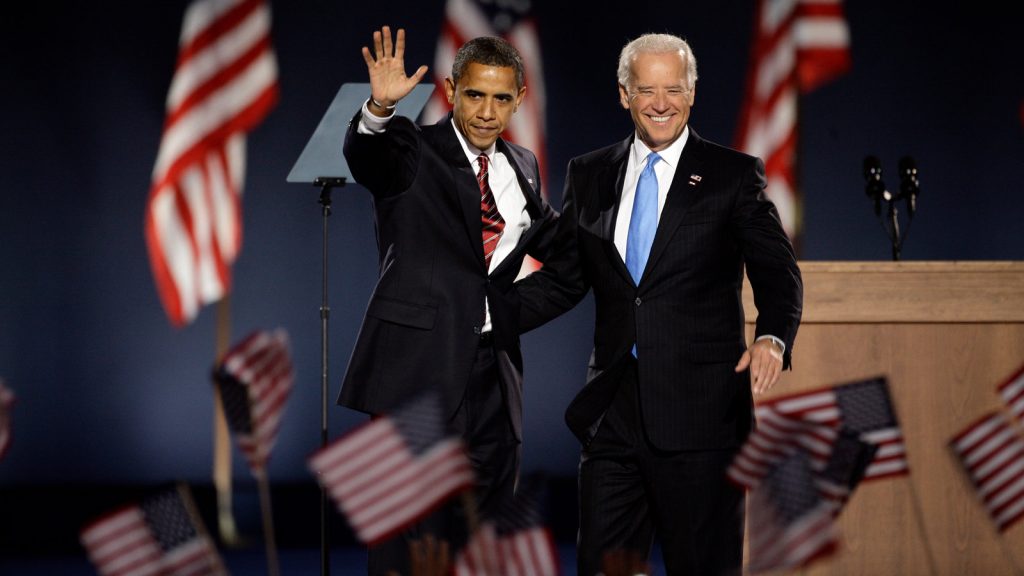 No one has championed young American designers the way Michelle Obama did, so today, designers are becoming excited again for a fashionable-forward president and first lady. In an article in GQ magazine, America’s most influential designers are celebrating President Joe Biden’s sartorial choices.

In an interview with GQ, American fashion designer and CFDA Chairman Tom Ford stated, “Joe Biden is the perfect American president for now. I have always said that true elegance is not about style but about the way that one treats others. And Joe Biden is elegant. He also happens to be sartorially elegant: understated and a kind of calm and self-assurance that comes with age and experience. Slim and long with perfect posture, I find him quite sleek. A dramatic contrast to his predecessor. In fact, a welcome contrast in every way.” 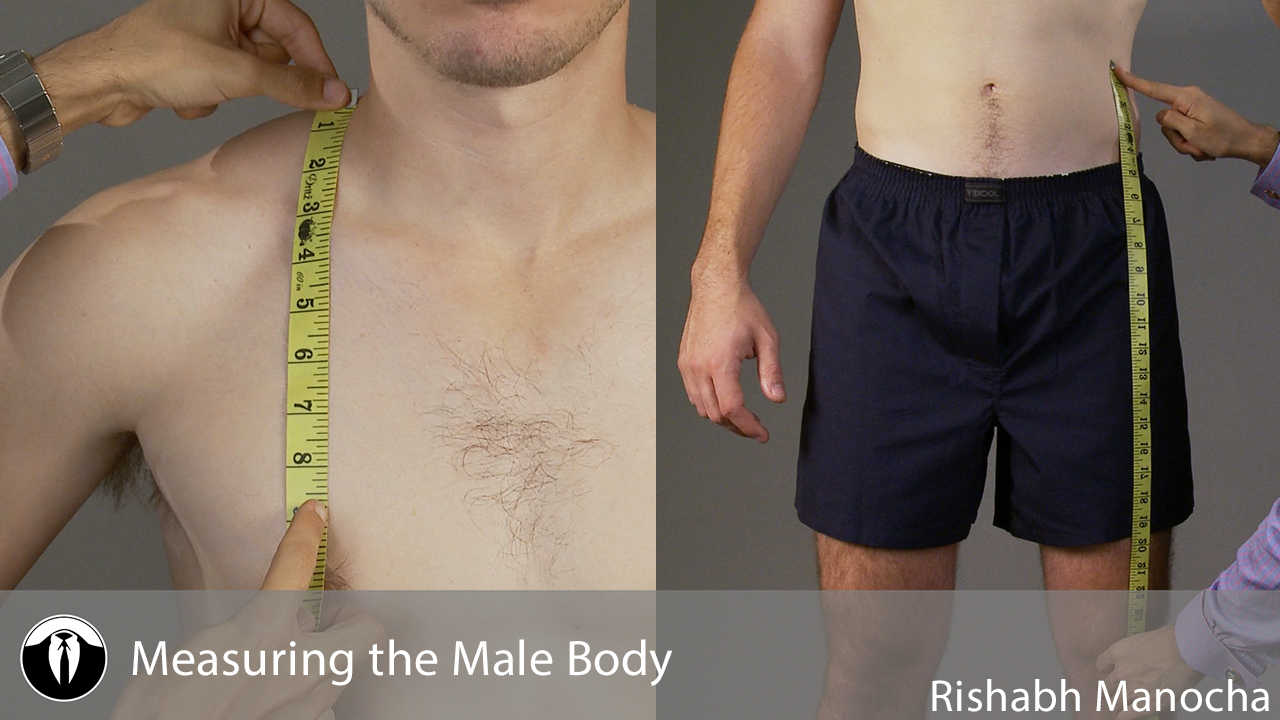 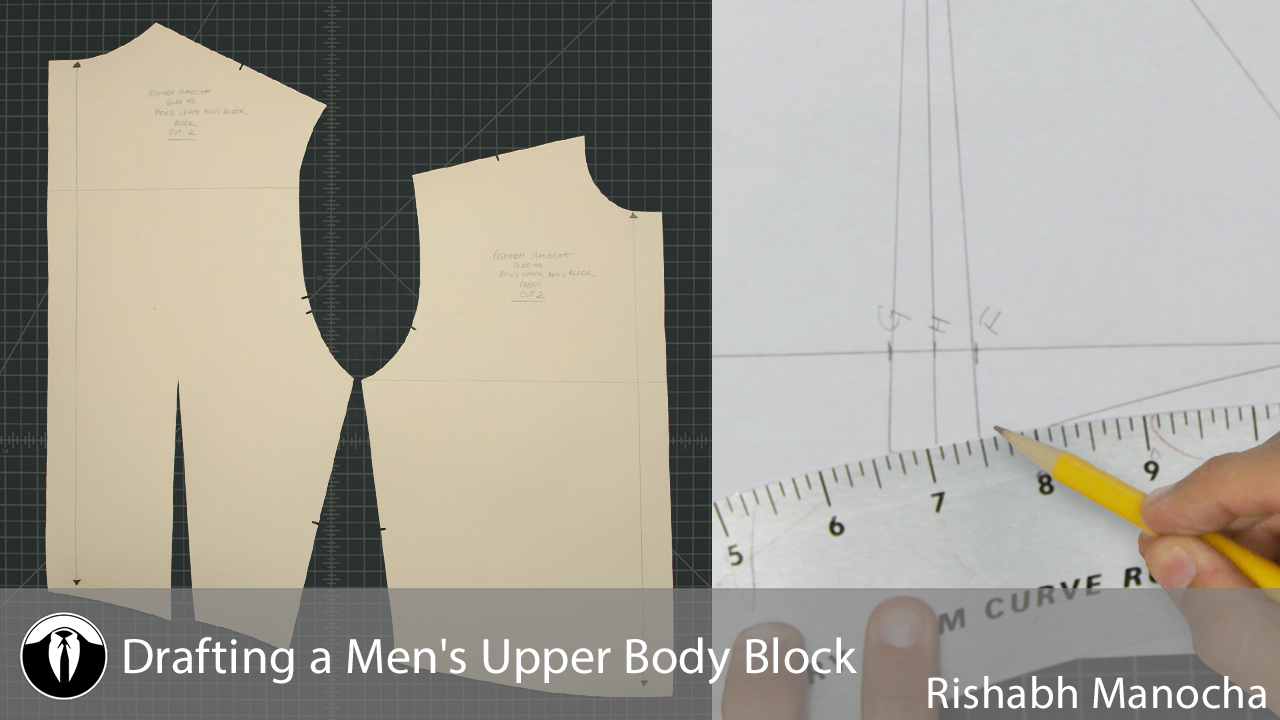 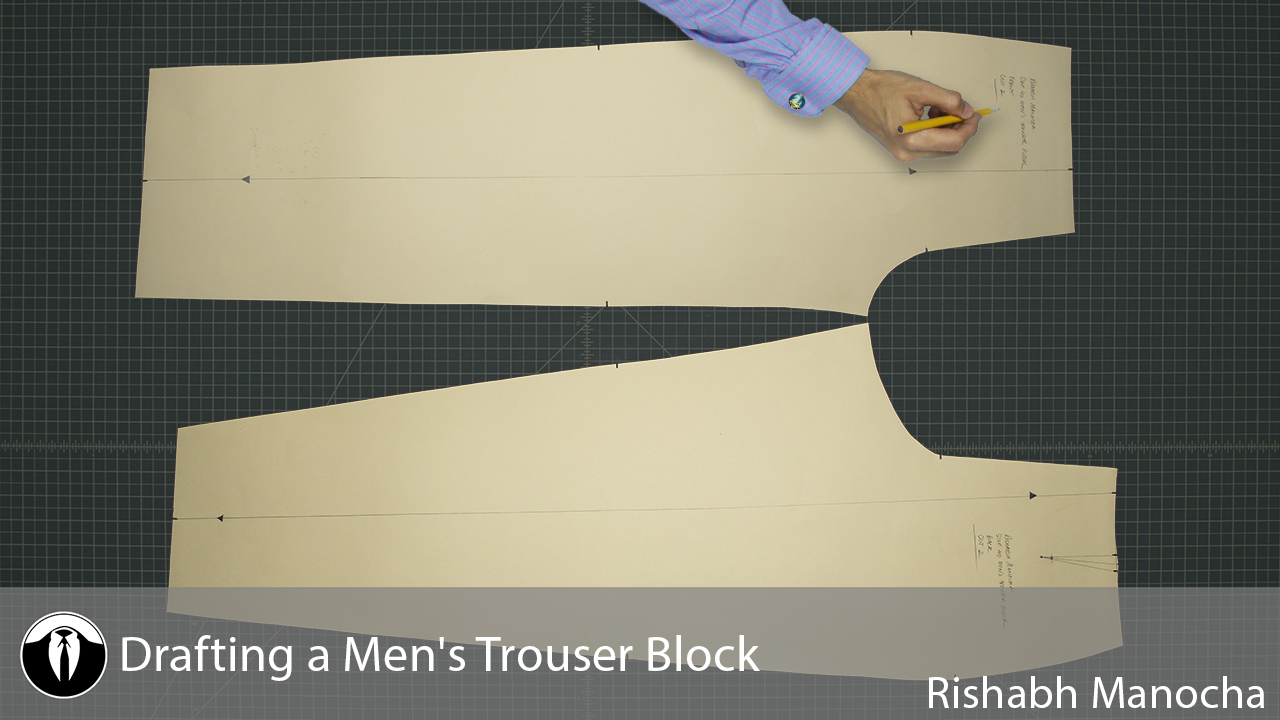 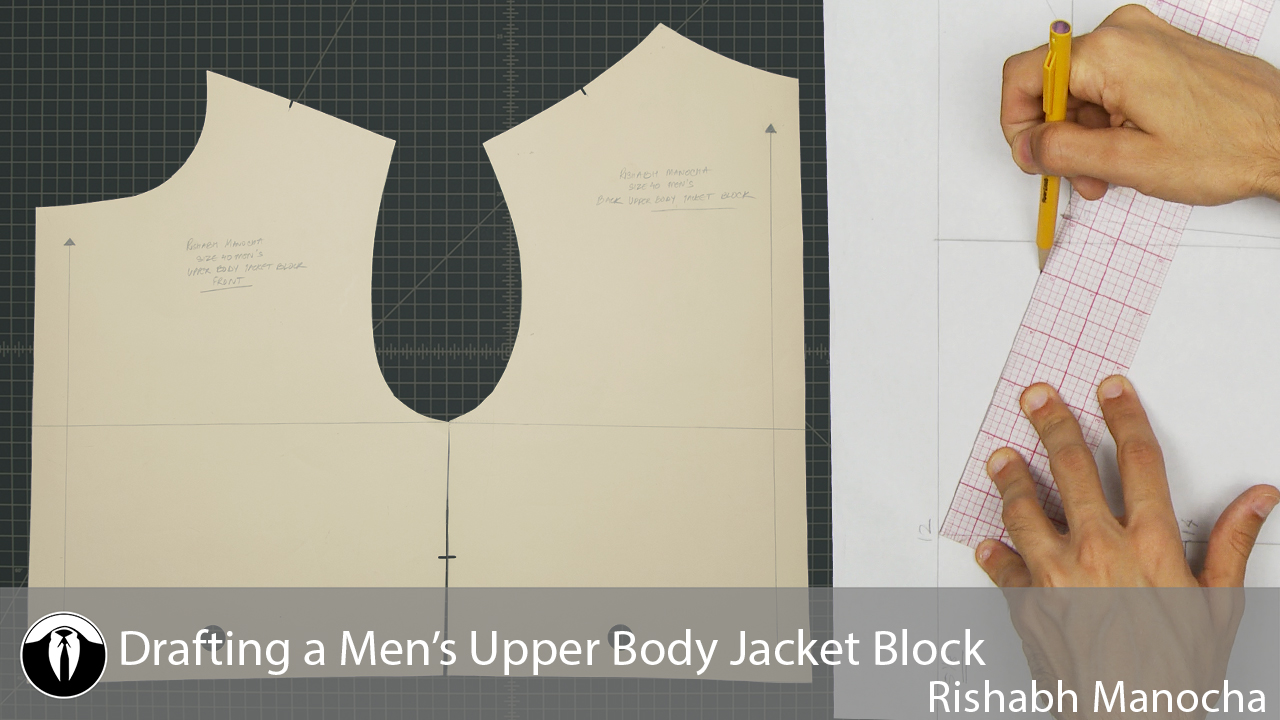 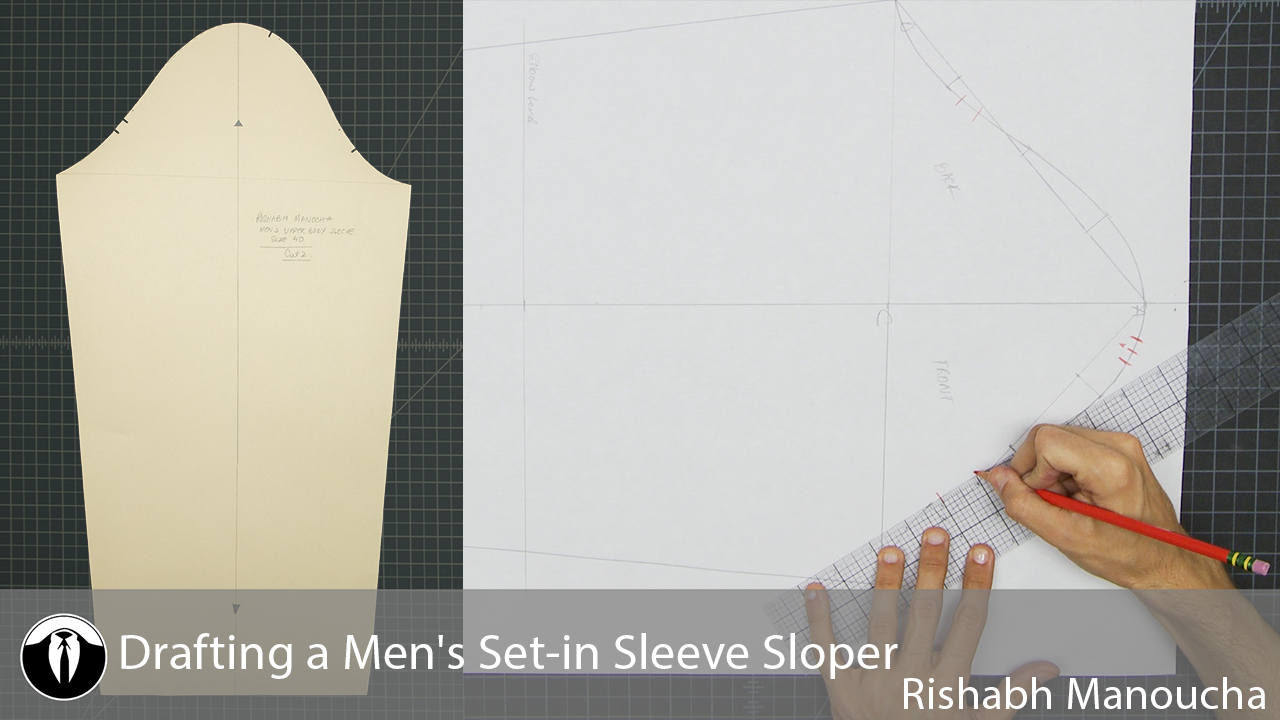 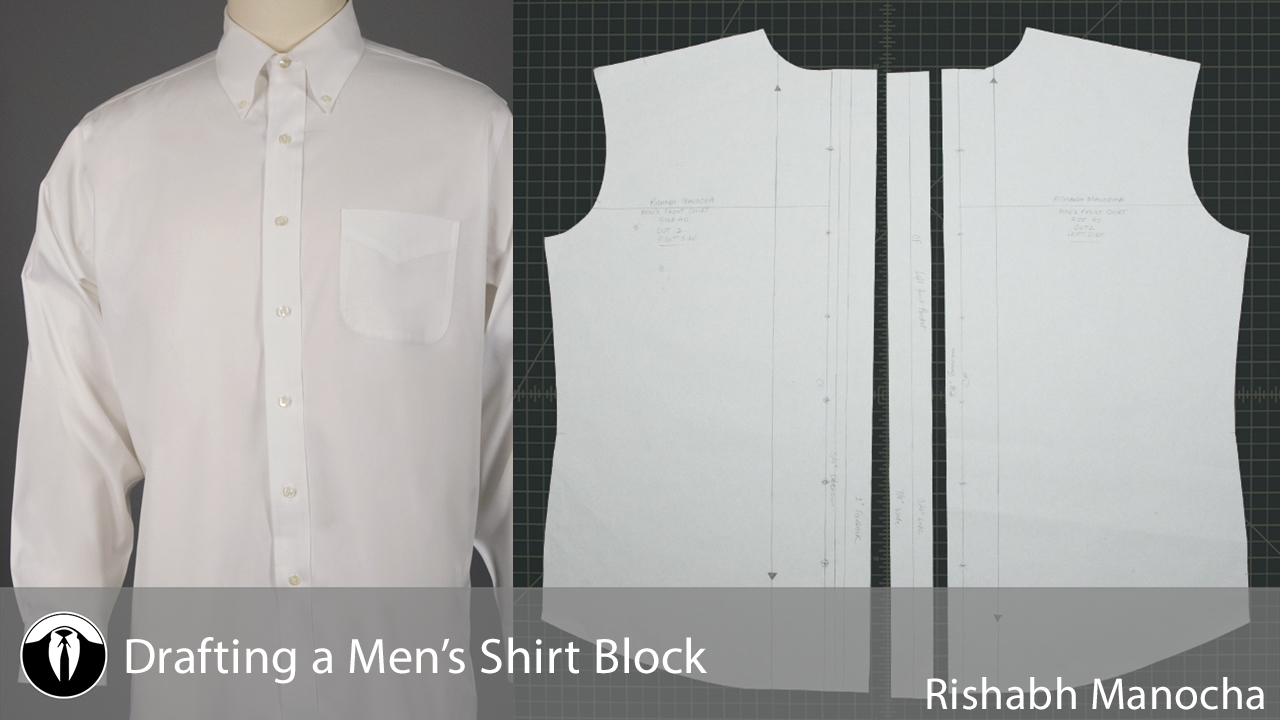 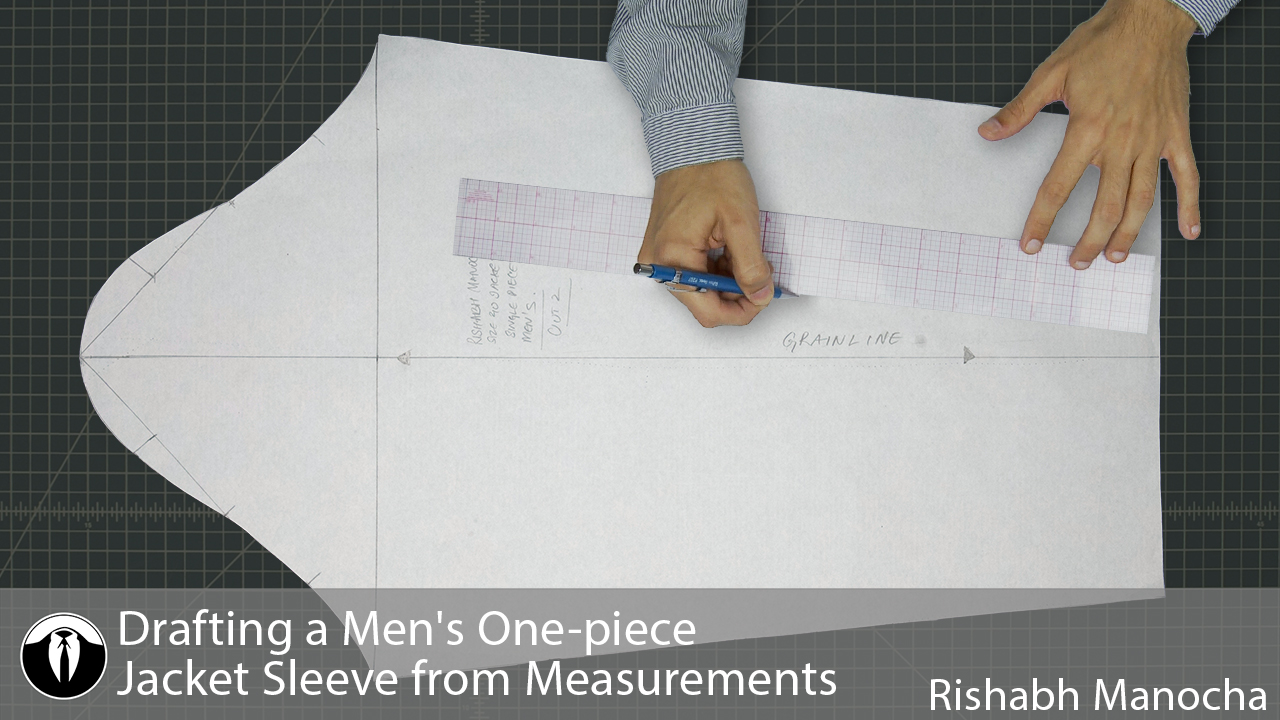 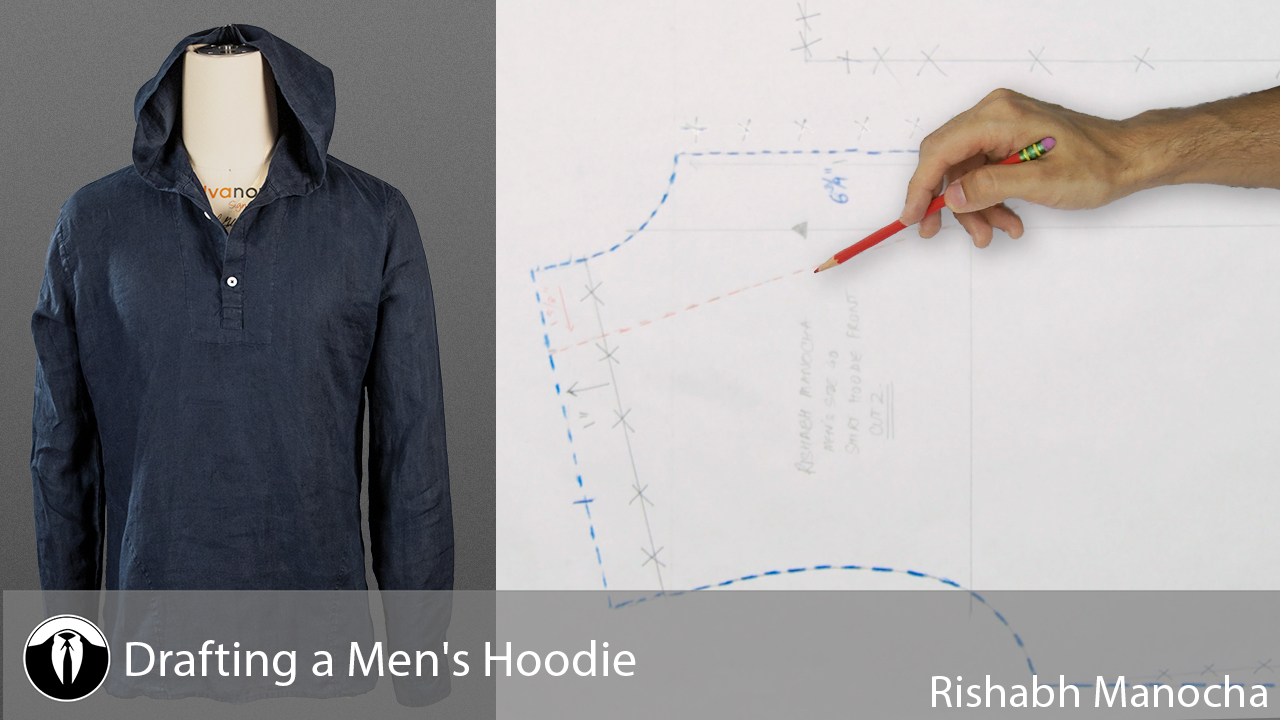