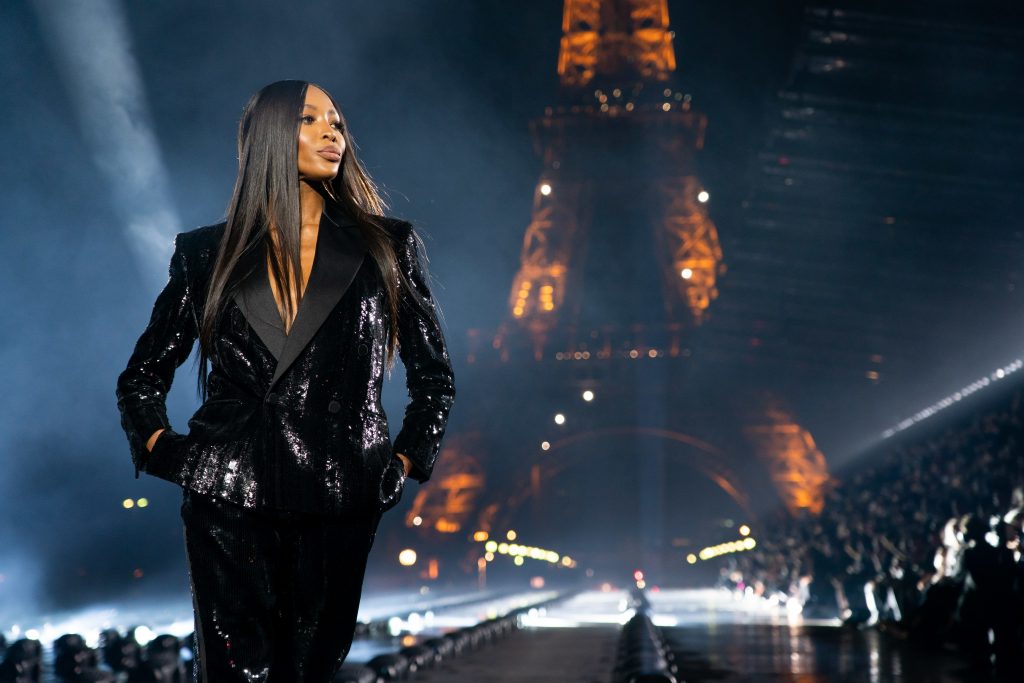 What a great season Spring 2020 has turned out to be. Yes, the old guard and heritage houses like Ralph, Burberry, Versace and Saint Laurent have the funds to create runway spectacles chock-a-block with celebs, BUT for the first time ever, we are witnessing the Big Four- NY, London, Milan and Paris, celebrate new, creative, young design talent. Maybe it’s a sign of the times. With calls for diversity on the runway in terms of ethnicity, gender parity and  body positivity, as well as messages about climate change and sustainability, we can’t help but think that finally…established designers are making room for upstarts. No one could be happier than us here at University of Fashion, whose mission has always been, since 2008, to provide equal opportunity access to affordable fashion education for all.

Let’s take a look at  some of the emerging designers who are fast becoming fashion’s favorites. 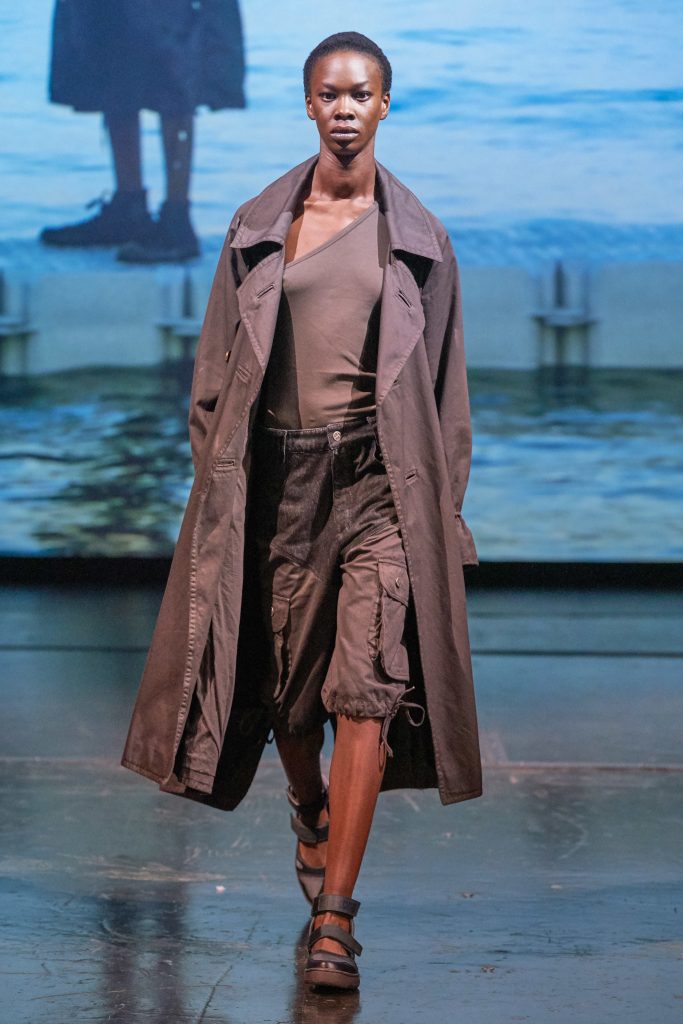 Telfer Clemens is a young NY designer known for creating show experiences that are as energetic and cool as his non-gender fashion label Telfar, which he established in 2005. For his Spring 2020 collection, Clemens’ plan was to “disrupt Paris Fashion Week” (according to his show notes), and Clemens did so with fanfare.

The designer presented a short film entitled, “The World Isn’t Everything,” which he collaborated on with friends such as Moonlight’s Ashton Sanders, Kelsey Lu, Petra Collins, and Slave Play playwright Jeremy O. Harris, who was in the audience in a look from Telfar: a yellow shirt, athletic shorts, and fishnets. The video played at the theater La Cigale, and as the characters appeared on screen, models walked the runway in the exact looks; creating an interesting double affect.

According to Clemens, the collection was inspired by “the customs/security lines at any airport at any given time, anywhere in the world.” So obviously the collection focused on comfort and style. Clemens’s travelers were ultra-cool as they wore cargo pants, utility jackets, asymmetrical tops, and his new take on the tracksuit – with interesting cut-outs. Clemens interlocking T and C bags have become a huge hit, so for Spring, he expanded on his accessories by offering a small assortment of jewelry with his signature logo.

After the finale walk, the models began dancing and Clemens, the filmmakers, and eventually the show attendees, all joined in on the fun.  It was a joyful way to start Paris fashion week. 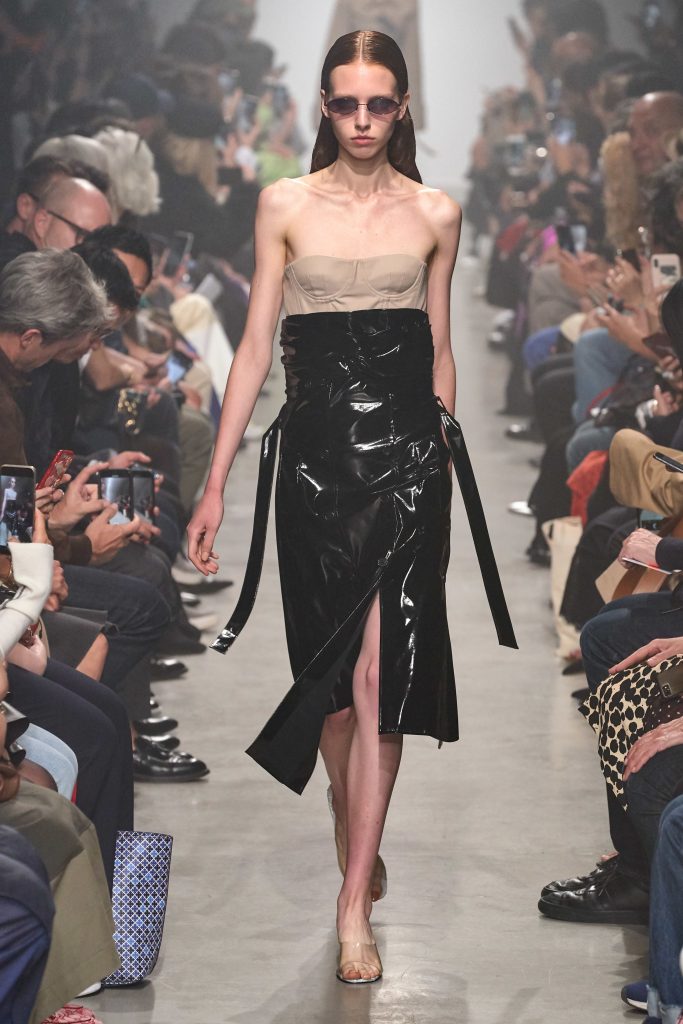 We are living in a global world and Rok Hwang, the designer behind the label Rokh, embodies this concept perfectly. He is a Korean-born designer, based in London, showing in Paris. His collection was inspired by a road trip he took across America with his family when he was only 10 years old. According to Vogue.com interview, Hwang said, “I remember arriving at 8 o’clock in the morning in New York and seeing all these girls walking really fast in sharp suits and checked trenches. That was the memory embedded in me; I wanted to write a visual story of that trip.”

The collection had a fresh take on a Nineties theme, as Hwang redefined a chic, modern sportswear with a dark edge. The designer sliced, diced, and wrapped trench coats, added leather patchwork and plaids, and his slit-hemmed pants gave off an updated twist to the grunge look. With such a polished collection, it’s no surprise that Hwang was a runner-up for the LVMH Prize in 2018, and was one of the founding members of Phoebe Philo’s team, picked for her studio at Céline, straight after graduating from Central Saint Martins in 2010.

Christelle Kocher may have only been designing her fashion label Koché for a few years now, but the talented designer is already a fashion darling among the influential crowd. This year’s winner of the ANDAM Prize (Paris’ prestigious fashion award) Kocher one-upped herself by becoming the first designer ever to be offered the Centre Pompidou’s Bibliothèque as a show venue. She even snagged a collaboration with Nike.

Kocher has mastered the ‘high-low aesthetic’ as she mixes streetwear with couture details. Case in point, a sharply tailored trench with intricate embroidery. She is also passionate about sustainability and since the start of her label, has incorporated upcycled materials throughout her collection. For Spring, the recycled fabrics were found on patchwork polo dresses and tracksuits.

Her show had a heavy focus on evening looks with intricate lace dresses, pajama-inspired looks with feather trims and the finale was a spangly cocktail number, the base of which were soccer jerseys cut into embellished florets linked together by strands of tiny beads. This may have been Kocher’s strongest collection yet. 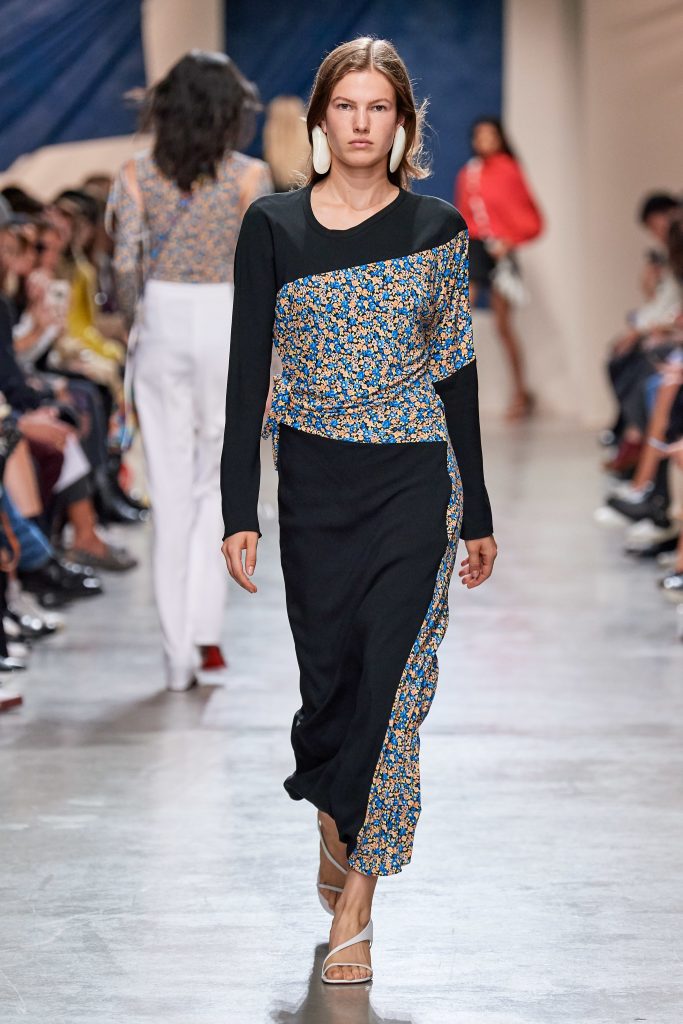 Antonin Tron is another young designer who is incorporating sustainability into his collection labeled Atlein. For Spring, he presented a chic and elevated collection. Most impressive was that Tron was able to create 60% of his collection using deadstock fabrics that he sourced from mills and factories across Italy. So bravo to Tron who is elevating the concept of sustainability! The designer is also a member of the Extinction Rebellion, fighting for real action on climate change.

The majority of Tron’s collection is made in his native France, by technicians that have fine-tuned the art of craftsmanship. Tron is quickly becoming known as a master in draping, cutting and manipulating jersey (which has become his signature fabric). On his runway, there were plenty of amazing dresses, most notable were the bias-cut floral prints that where youthful, yet oh so sophisticated. It’s exciting to watch this new crop of designers bring together fashion and sustainability in a modern way, and Tron was able to execute this blend perfectly.

We would not want to end our coverage of PFW without a shout-out to Anthony Vaccarello at Saint Laurent who recruited supermodel Naomi Campbell to close out his show, held under the Eiffel Tower. Remember when fashion show finales ended with a wedding dress? Well, it seems that a supermodel or celeb (JLo for Versace) is fast becoming the trend.

At the Christian Dior show, creative director Maria Grazia Chiuri held tribute to nature, with 164 trees lining the runway and that will later be planted throughout Paris. You have to admit, fashion knows how to create buzz, right? 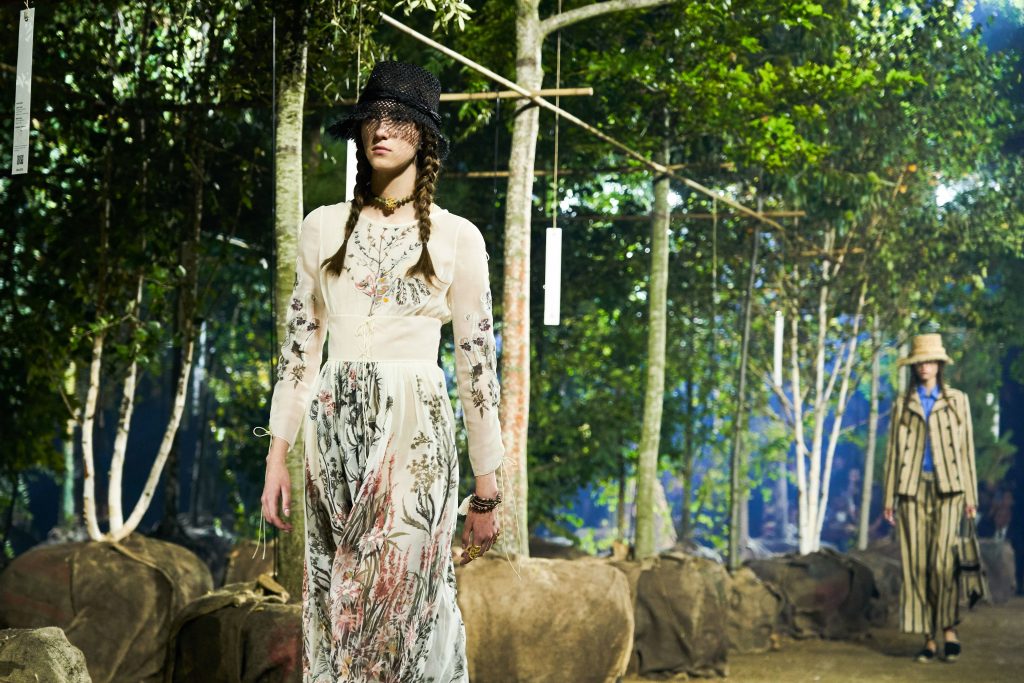 Meanwhile, at Maison Margiela, John Galliano enlisted male model Leon Dame who shot to fashion stardom with his stomping walk down the runaway. 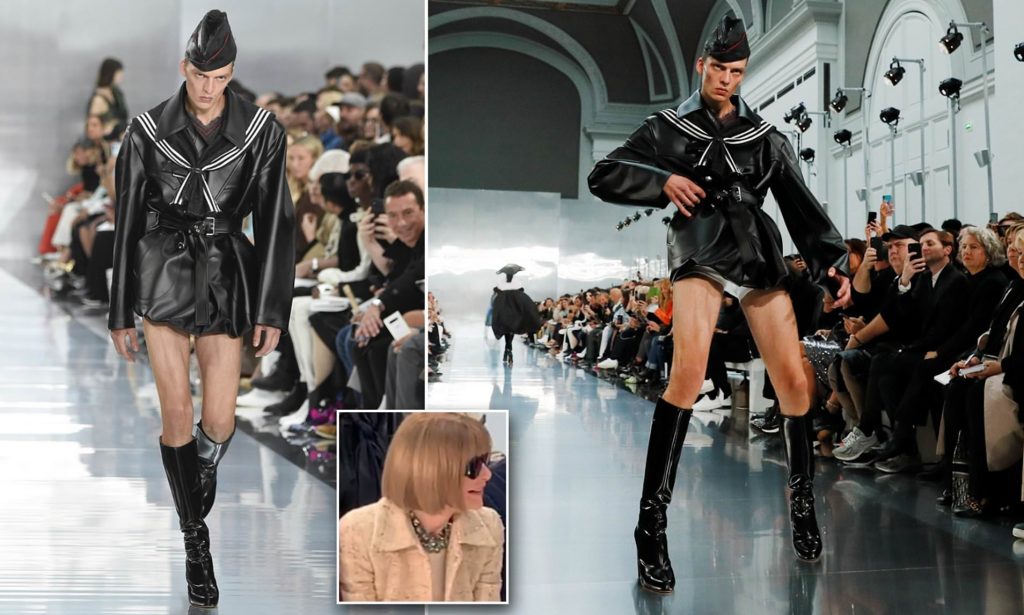 At Maison Margiela, male model Leon Dame shot to fashion stardom with his stomping walk down the runaway. He even put a smile on Anna Wintour’s face. (Photo courtesy of DailyMail.com)

Of special note and one of the strongest and most exciting shows in Paris was the enchanting collaboration between Dries Van Noten and Christian Lacroix. According to Cathy Horyn, the two masters working together, “was unprecedented. As far as I can tell, no couturier and ready-to-wear designer have ever worked together before on a runway collection. There have been “capsule” collaborations between designers and mass or leisure brands — Karl Lagerfeld and H&M, for example, or Rick Owens and Birkenstock. But from the outset, Van Noten says he didn’t want his project with Lacroix to be seen in that context — as just another marketing opportunity.”

“I started to work on this collection in February,” Van Noten said, explaining what led him to contact Lacroix. “Normally, I try to avoid escapism and nostalgia, but the world is not a very nice at the moment. So many things go wrong, and I thought maybe it would be interesting to do something about escapism.”

Van Noten is known for his exquisite fabrics and Lacroix is a master at over the top romance, so together, they created a magical moment that sent buyers, editors and other designers into a delightful frenzy. 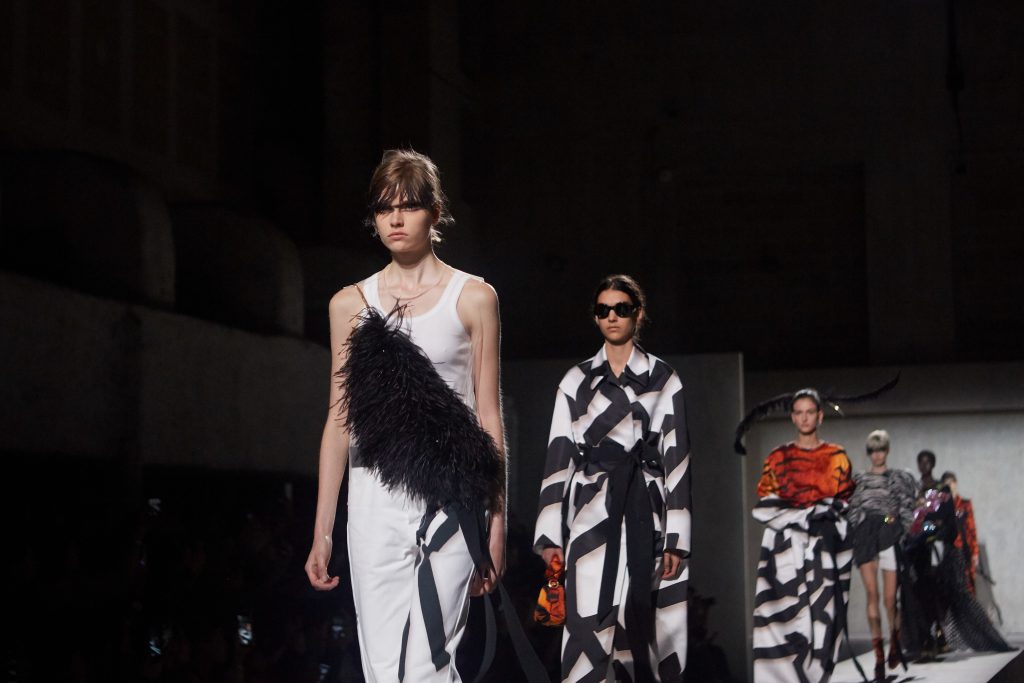 Care to share with us which aspiring designer from Fashion Week S/S 2020 you think is on track to ‘make it’?