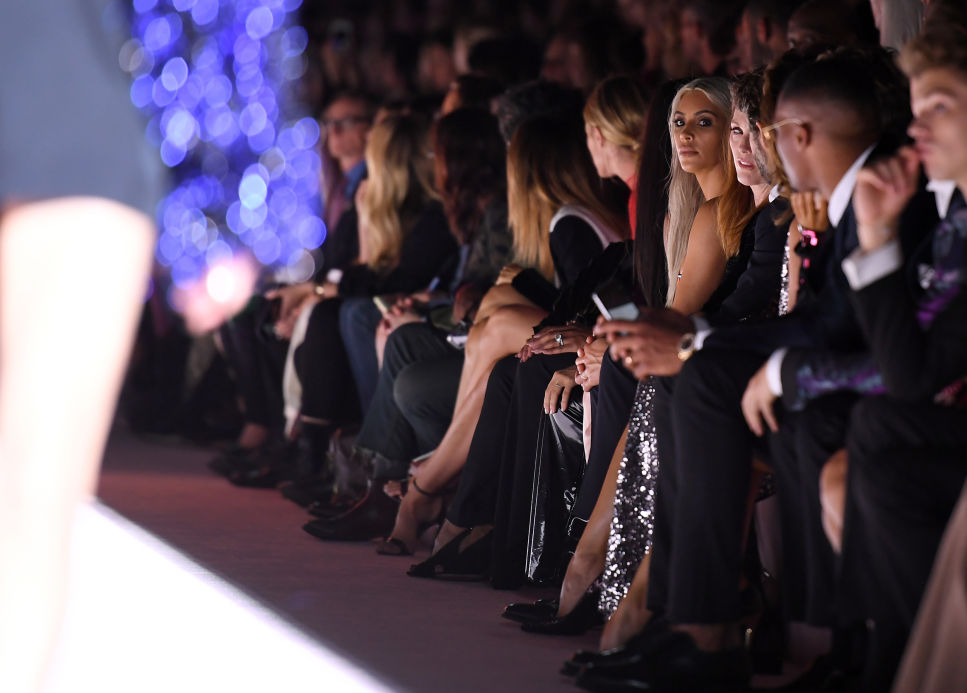 Fashion Month is in full swing as New York kicked off the Spring 2018 show season with a bang. Of course, there was plenty of buzz before shows even started such as the Council of Fashion Designers of America (CFDA) cutting the NY calendar by a day, New York based designers showing in other cities, and the stress of where to show. Then lets add on the celebrity circus and street style stars in the mix and it’s been a entertaining week.

One of the biggest trends among the fashion crowd before shows even began was the blue ribbon. Fashionistas are pinning themselves to protest racism and hatred in the wake of this summer’s white power rally in Charlottesville, Va. The ribbons were created by the CFDA and the American Civil Liberties Union. In a statement released, Steven Kolb, president and CEO of CFDA, said “We want to be on the front line, not the sidelines, to boldly fight to protect our precious rights and freedoms, which has taken on a renewed urgency after the heart-wrenching events of Charlottesville.” 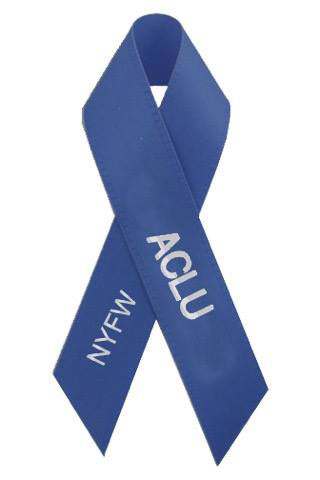 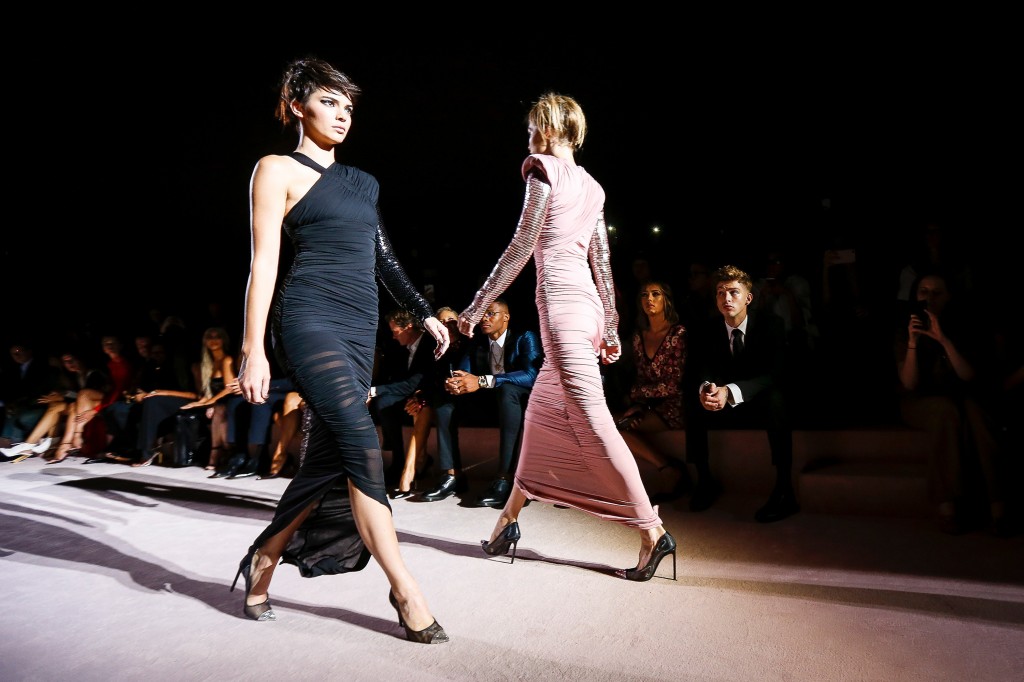 Tom Ford kicked off fashion week and it was the buzz of the season before it even started. His invitation was all the rage and was Instagramed by the fashion set – a bottle of his latest fragrance, Fucking Fabulous—as if we needed a reminder. Much of Tom Ford’s namesake label’s success has been with his menswear collections, so for spring, Ford took a nod from his menswear collection and showed impeccably tailored suits. His jackets were sexy and confident, with sharp lines and broad shoulders. In a throwback to his signature Gucci 90’s glam, Ford showed plenty of ruched net dresses that where oh so seductive – it’s clear, Tom Ford is back! 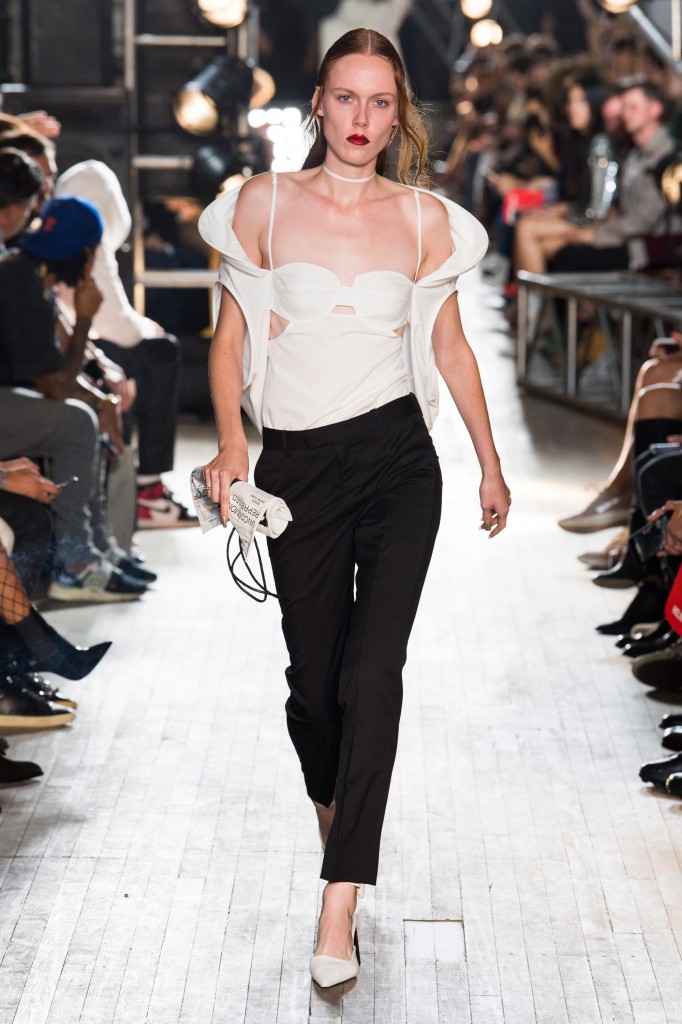 The Helmut Lang collection label is being revised again and the timing couldn’t be better, with so many young designers referencing the designer’s minimalistic aesthetic as a point of reference. The label’s designer in residence is none other than Hood By Air’s Shayne Oliver, so now Helmet Lang is sexier than it’s ever been. Oliver showed some streamline tailoring that was true to the houses’ heritage, but all with a fetish streak. The collection felt more like a Hood By Air show than a Helmut Lang collection. Oliver showed plenty of kink with asymmetric bras, daring peekaboo harnesses, rearless pants suspended from the waistband like garters, leather codpieces, and strappy BDSM gear. The collection left many Helmut Lang fans (all who remember his collections vividly) divided. 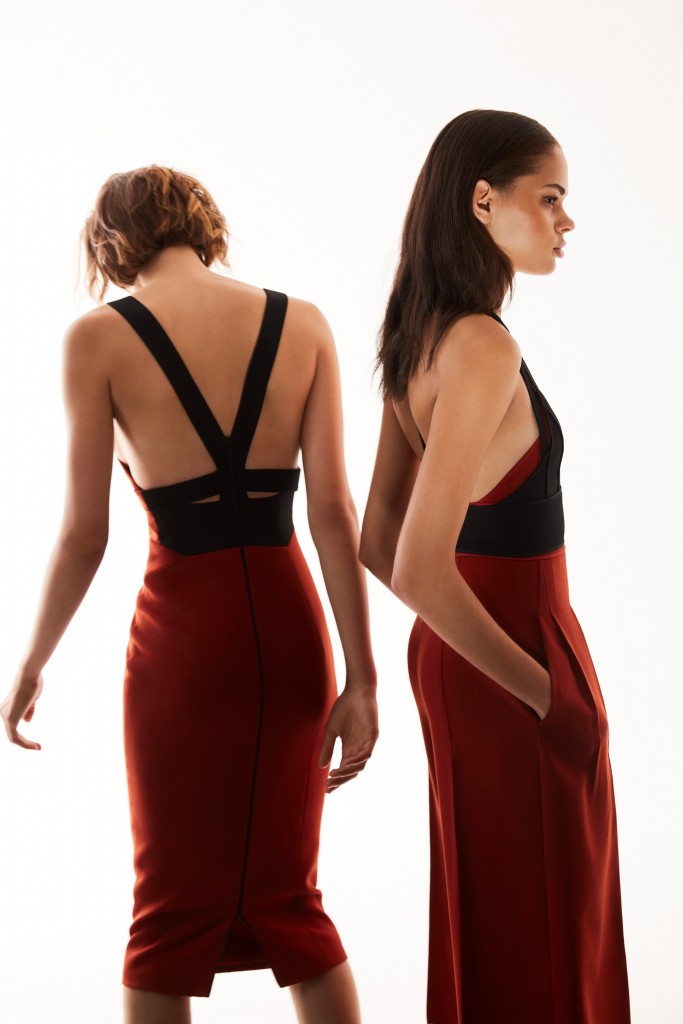 This season Narciso Rodriguez opted out of a formal show and the celebrity circus it has become, instead he held private appointments to present his spring collection. Season after season Rodriguez is consistent chic yet sexy clothes that real women want to wear. His workmanship is impeccable and so important to see upclose rather than a runway. Sticking to his signature looks, Rodriguez showed slinky knit dresses in black and white with openwork stitches that show flashes of skin, a harness-top sheath with a sliver cutout, and an attenuated jumpsuit with a deep U-front. 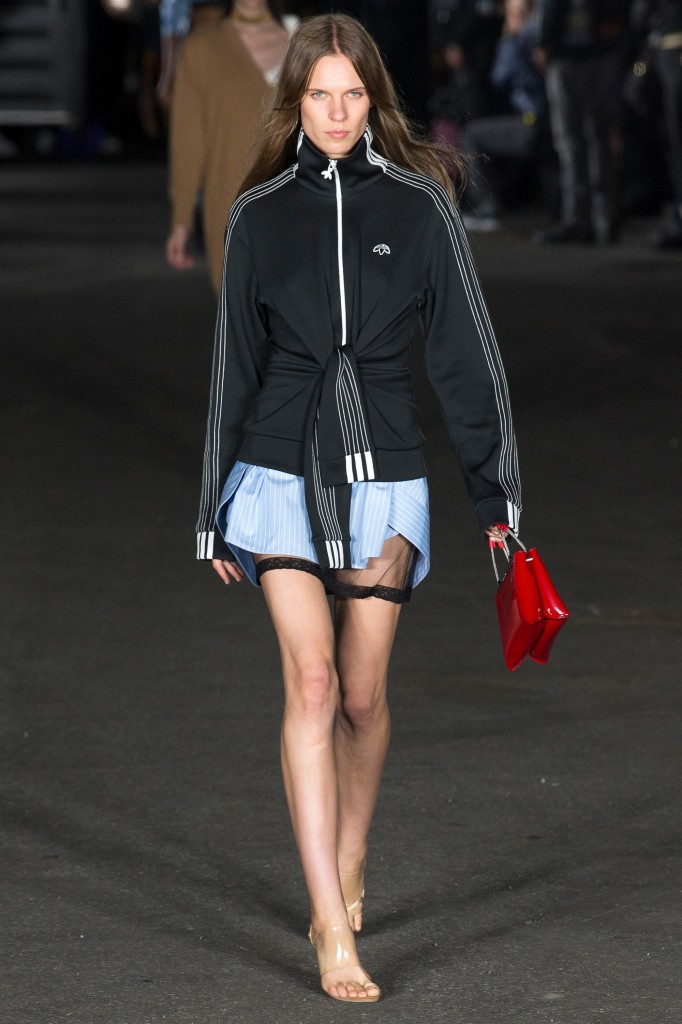 Athleisure and streetwear have been going strong now, but for spring the trend takes a more feminine twist. At Alexander Wang’s #WANGFEST, models rode around a party bus Saturday night around New York City’s busy streets. The first stop was Lafayette and Center Streets in Manhattan, the second was at Astor Place; both were open to the public. The press and retailers were invited to the last stop – a dead end in Bushwick, Brooklyn; which then led to #WANGFEST, his jumping after-party in a literal jumpy castle. Models were literally pouring off the bus in a runway format that was fun and energetic. As for the clothes, it’s what Wang does best, sporty with a sexy twist. These are real clothes for all the cool kids. Wang layered denim cut-offs over leather leggings and there were a lot of extra sleeves and jackets that were cut in half and worn as skirts. Wang is also continuing his collaboration with Adidas, with a zip-front jacket with the extra sleeves cinching the waist. 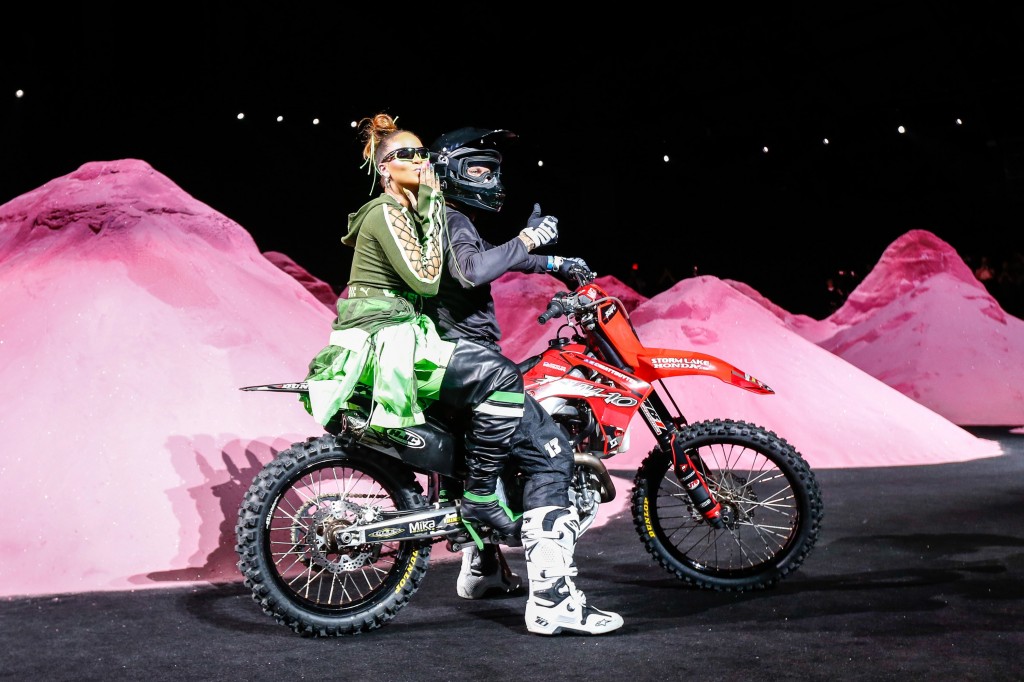 Wang isn’t the only one to break the ties from traditional fashion shows, Rihanna gave her audience an adrenalin rush as she presented her Fenty x Puma show. The set was designed with pink sand mountains and a trio of motocross stuntmen performed mouth-dropping stunts. As for the clothes, they were sporty, fun, colorful and sexy all in one. Inspired by the X Games, there were a number of classic surf references thrown in for good measure – think biker shorts and scuba onesies. Rihanna showed modern interpretations of cheeky 1980s swim trends, case in point, the French-cut swimsuit. The entertainer also showed off her tomboy style with oversize motocross-inspired nylon track pants and anoraks that were a modern riff off the 90’s hip-hop trend. 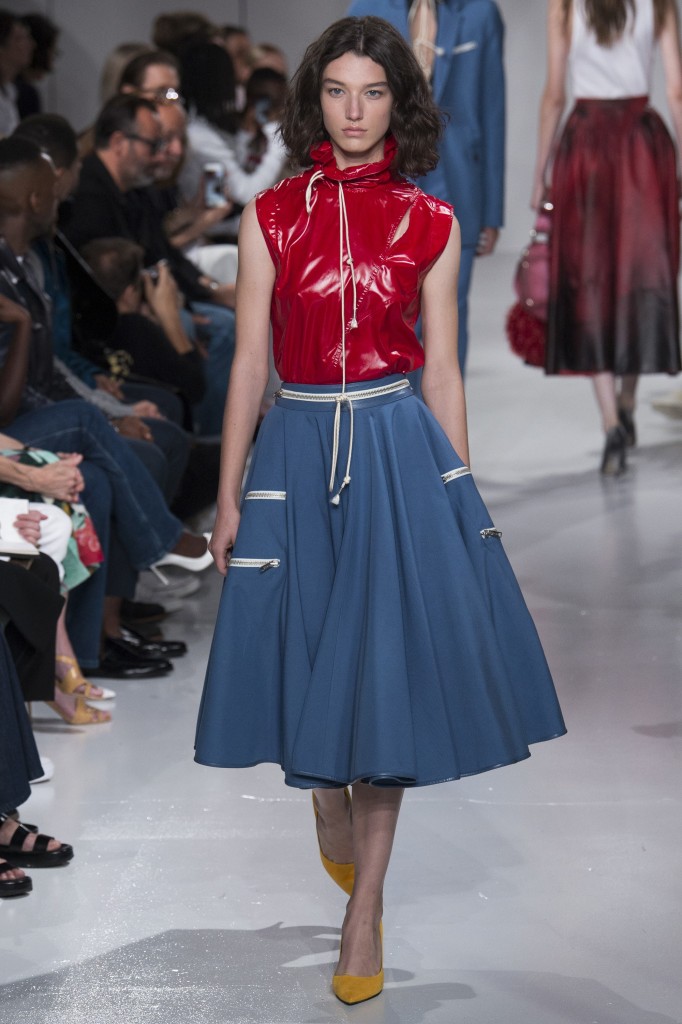 Meanwhile, at Calvin Klein, Raf Simmons continued his experimentation on American classics. For Spring, Raf was inspired by the contrast of the American Dream and American horror by invoking the magic of the movies; horror movies to be more specific as he played with Andy Warhol pop prints (specifically, Dennis Hopper circa Easy Rider and a 1971 Sandra Brant). His Hitchcock blondes wore rubber, and gauzy nightgowns reminiscent of Sissy Spacek in Carrie. Sticking to his American classics motif, Raf also showed plenty of cool denim, color blocked Western shirts, fringe dresses, 50’s inspired full skirted frocks and a nod to athletic with cool bungee cord details on nylon outerwear. 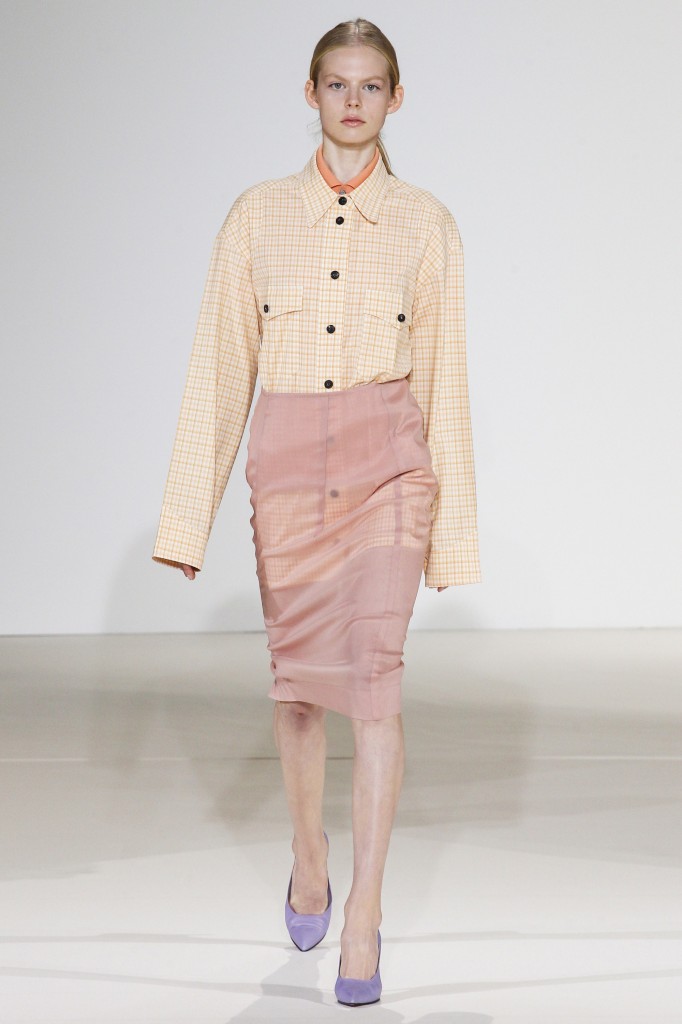 This season is turning out to be a sheer sensation as designers are leaving very little to the imagination, but not in a vulgar way. For spring, they are embracing the transparency trend with soft, wispy fabrics delicately draped and overlaid showing just hints of skin in a romantic and feminine way. Speaking of femininity, Victoria Beckham showed off her softer side this season with sheer fabrics in soft colors proving that delicacy can in fact be strong. Case in point, Beckham’s first look: a soft yellow check shirt, which was slightly oversized and boxy, tucked into a dusty rose organza pencil skirt. Pure perfection! 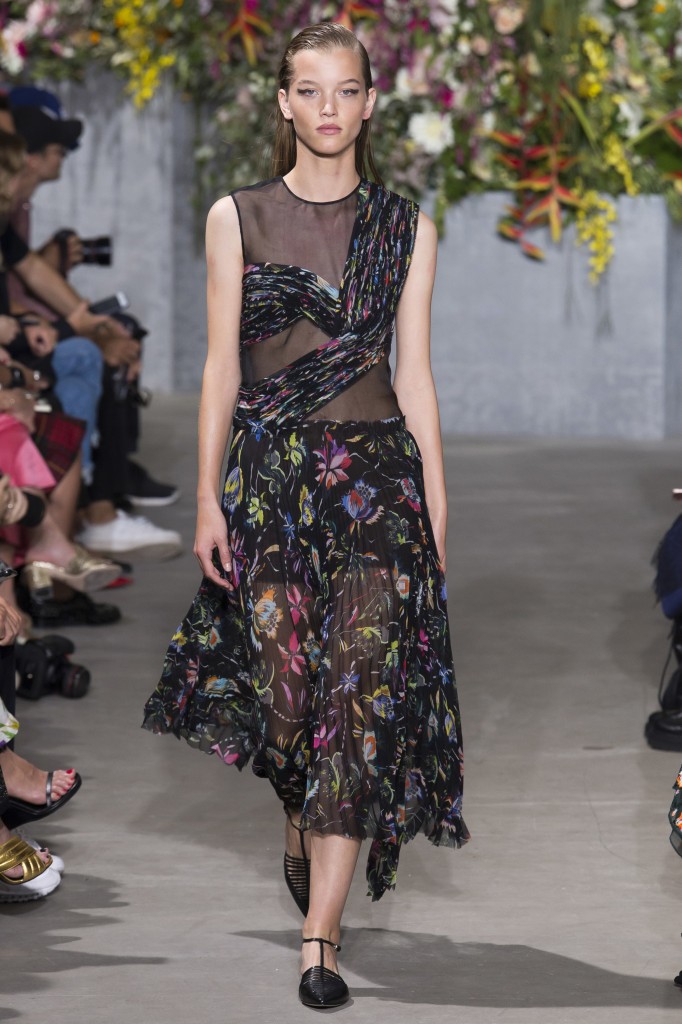 Jason Wu is known for his polished and elegant sensibility, and for spring he kept true to his DNA but in a slightly more casual way. But casual for Wu means a midriff-baring cutout on a striped cotton dress and laces suspended from a crinkled silk coat. For evening, Wu was inspired by Madame Grès and reinterpreted her innovative pleating techniques.  Wu also worked pleats onto sheer gowns staying right on trend. 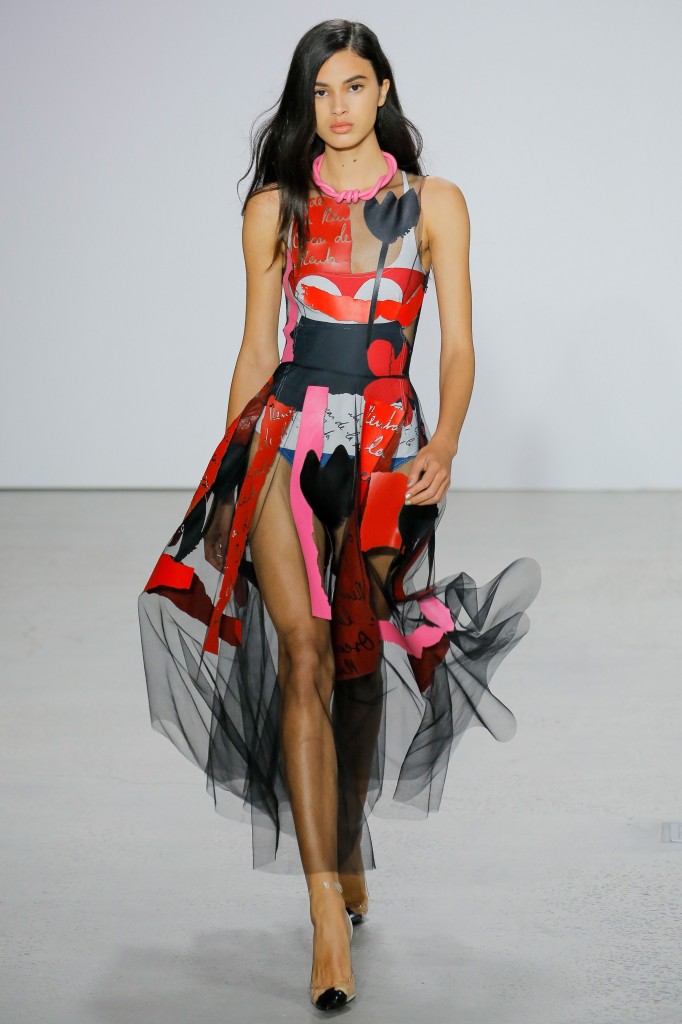 Meanwhile, Laura Kim and Fernando Garcia’s sophomore collection for the Oscar de la Renta brand were met with mixed reviews. Inspired by Pop Art and letters Mr. De la Renta wrote, along with thank-you notes that the duo have received from today’s young starlets. Sure De la Renta’s name was all over the collection, but his aesthetic certainly was not. Can you image Mr. De la Rents putting frayed and faded denim, sheer dresses, bathing suits and logo print furs on the runway? There were a few breathtaking evening gowns that rang true to De la Renta’s style, such as the colorful dégradé tulle gowns. Still, Kim and Garcia are trying to find their footing in the house of Oscar de la Renta. 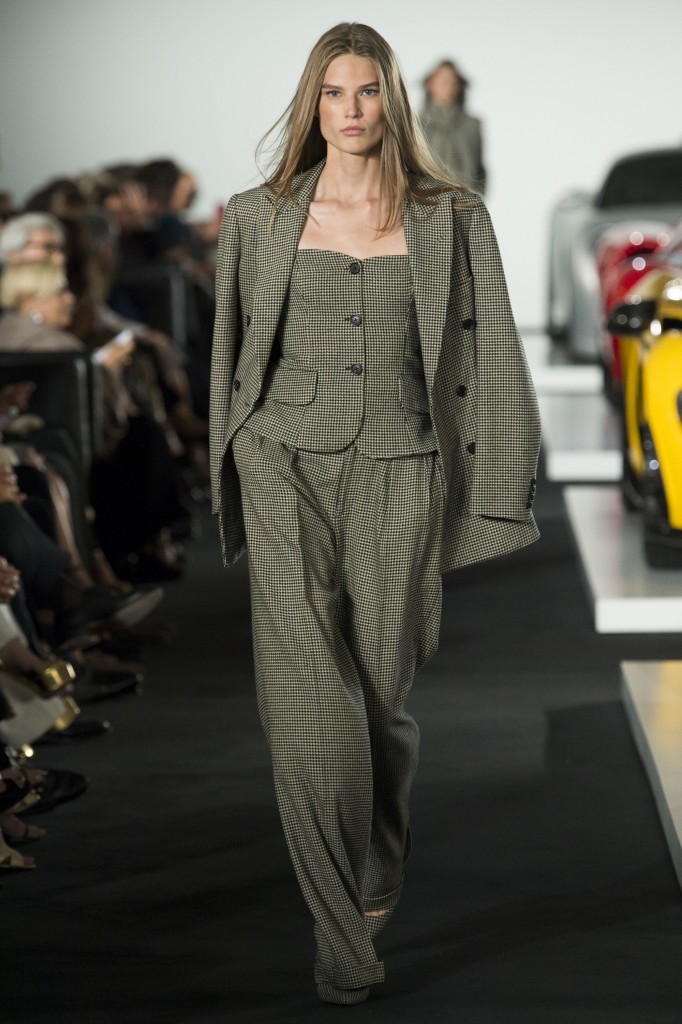 Traditional menswear has always been in fashion, but for spring designers are incorporating tailored suits in beautiful menswear fabrics for a look that is smart yet oh so chic. Of course no one does this better than Ralph Lauren. In one of the most anticipated shows of the season he transported the fashionable front row set to his garage in upstate Bedford, New York.  His vintage car collection is most impressive with Porsches, Ferraris, Jaguars, McLarens, and a Bugatti. The cars were innovative and sleek, but his clothes oozed timeless chic. For his Fall, buy-now-wear-now collection, Lauren worked mixed tweeds, checks and plaids on bustier tops paired with relaxed trousers. For evening, Lauren kept it casual with a puffer jacket over a sparkly minislip and over-the-knee boots as well as dapper tuxedos. 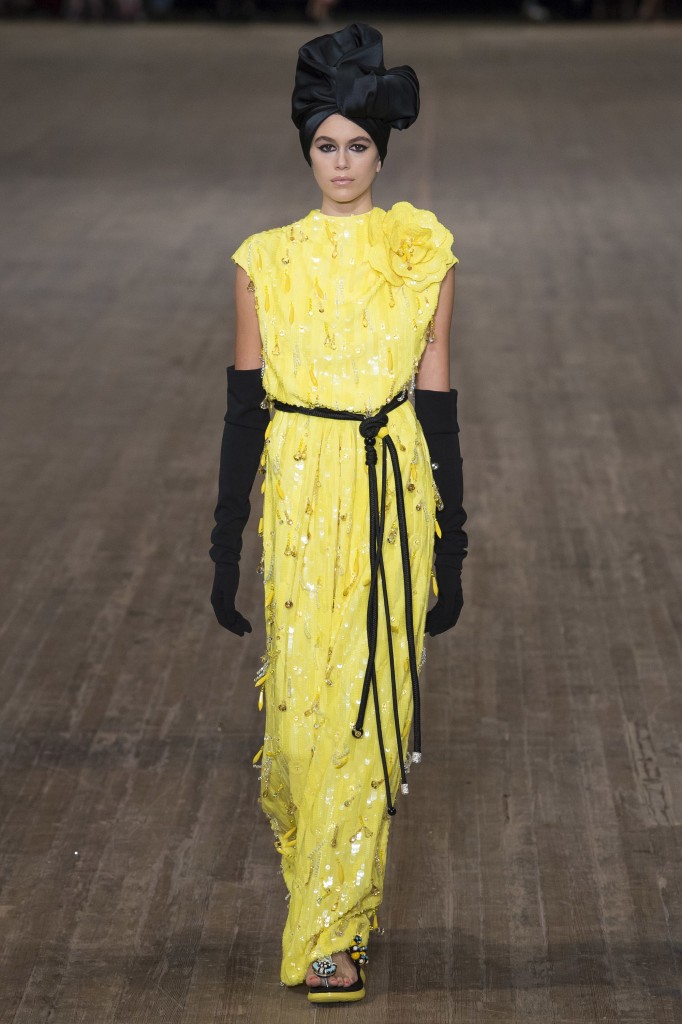 No designer is better fitted to close out New York fashion week than Marc Jacobs – you just never know what you’re going to get at a Marc show. This season it was silence, there was no whimsical sets built, no music, just the sound of 56 models walking only to the sounds of their shoes on the old wood planks of the Park Avenue Armory. The clothes were full of wit and humor. After being in business for 25 years, Jacob’s looks to his past collections for inspiration; his program notes called it a “reimagining of seasons past somewhere beyond the urban landscape of New York City.”

No music was needed to set a mood, the clothes themselves set a happy and joyful tone. There were giant, overscaled flowers; Crayola colors, tinsel trimmings, exaggerated shapes, and sequins, sequins, sequins. Jacobs’s idea was to return to the archives, passing old ideas and former hits through “exaggerated, decadent, and exotic” filters. Although some looks were trippy, overall, Jacob’s did what he does best, delivering a young and exciting line-up. 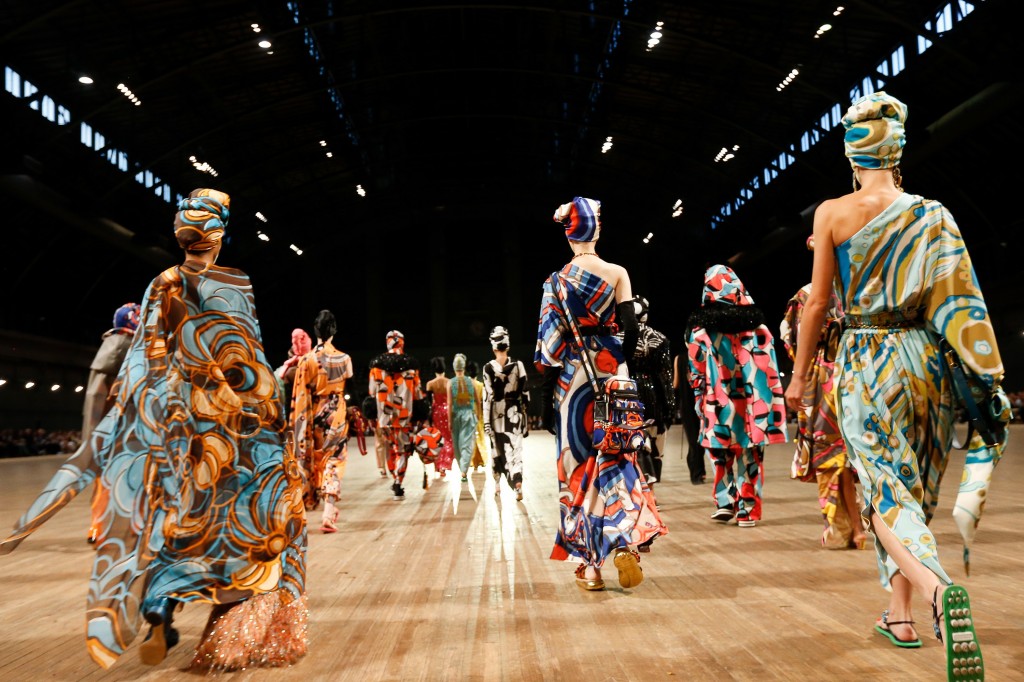