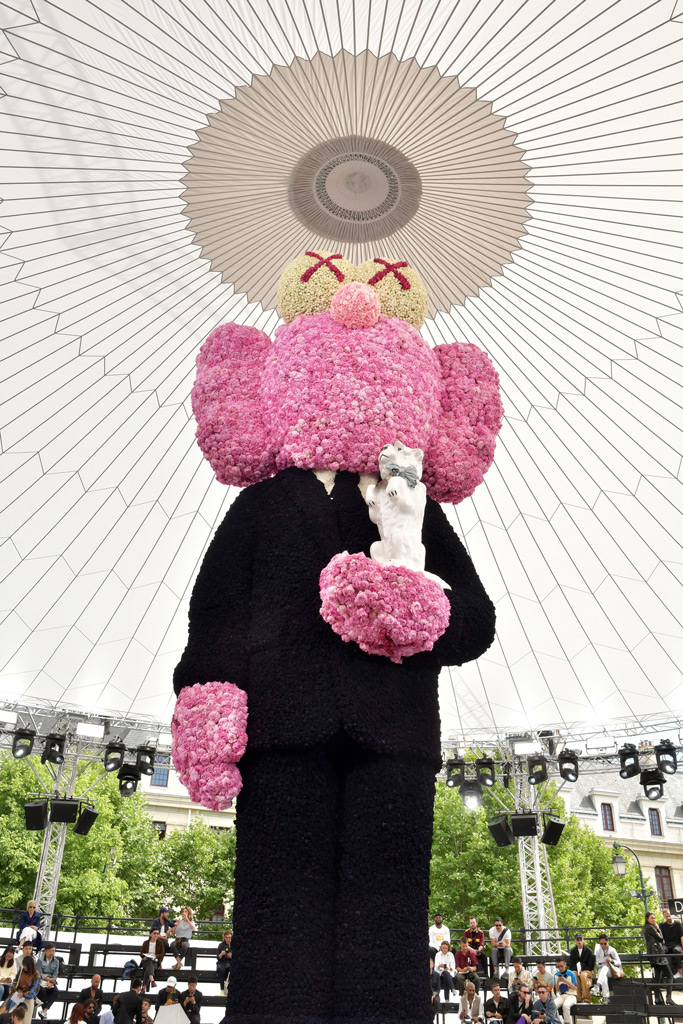 The whirlwind of Men’s fashion week is coming to a close as its last stretch will be in New York, but there were plenty of dramatic moments.

Virgil Abloh is an American designer, D.J. and stylist who gained recognition as Kanye West’s creative director. Today he is the designer behind the cult label Off-White and has become the newly minted creative director of Louis Vuitton Menswear collection. This is a major moment for Abloh. Not only is he the artistic director of men’s to one of the most powerful houses in history, but he is also the first African-American designer ever appointed as the artistic director to a heritage brand.

This was the most anticipated show of the season and his front row was a star-studded event with everyone from Kanye West to Rihanna supporting the young designer. Once his first look exited, the world new Abloh was the perfect fit for the job and elevated streetwear to the highest level of lux.

According to Vogue.com, Abloh was inspired by “the idea of white light hitting a prism, and dividing into its component colors,” which translated into an assortment of tailored white suits, most noteworthy was the double breasted blazer paired with pleated trousers. Then Abloh moved to bright, bold colors and plenty of 90’s Helmut Lang references. There were harnesses and a finale with lots of “Wizard of Oz” inspired prints. This collection was truly a magical, over the rainbow moment for Abloh and the giant hug he received from Kanye at the end was a testament to what a milestone moment this was for African-American designers. 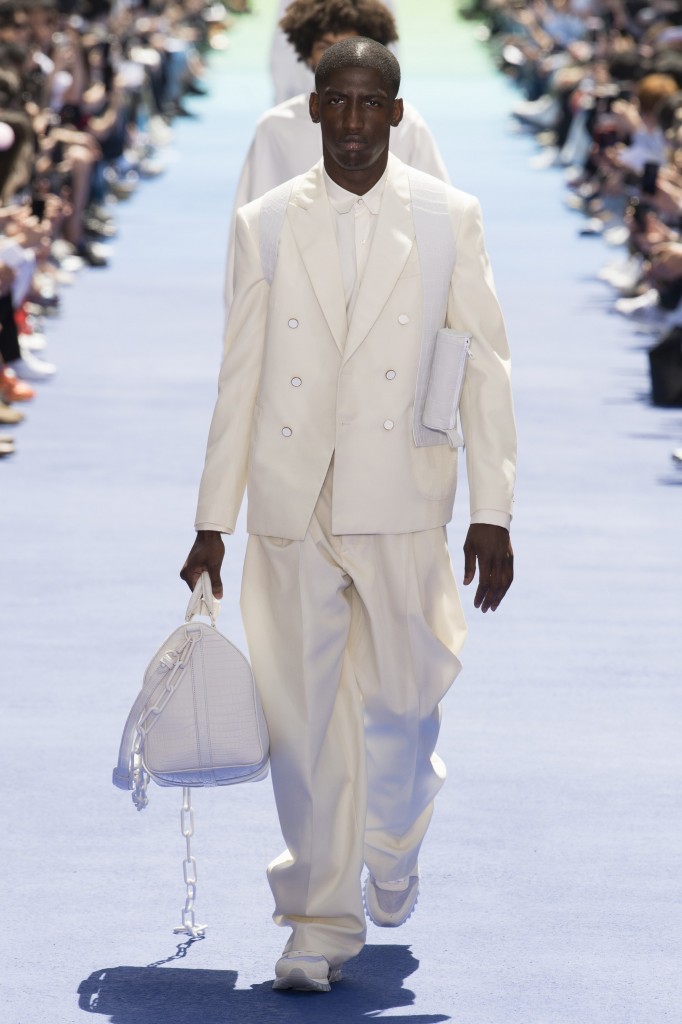 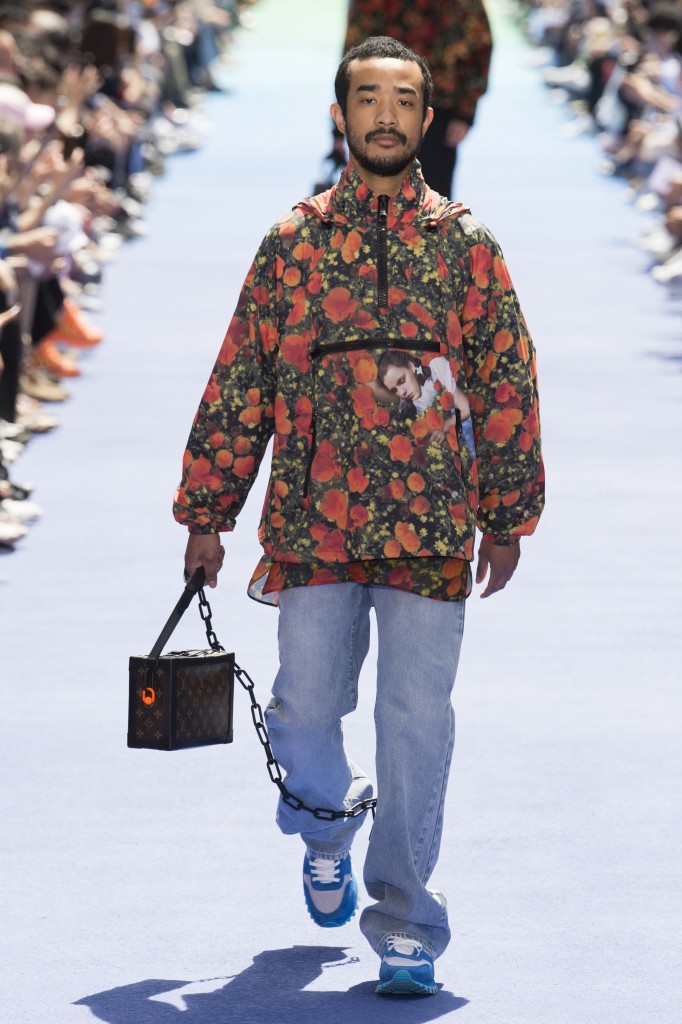 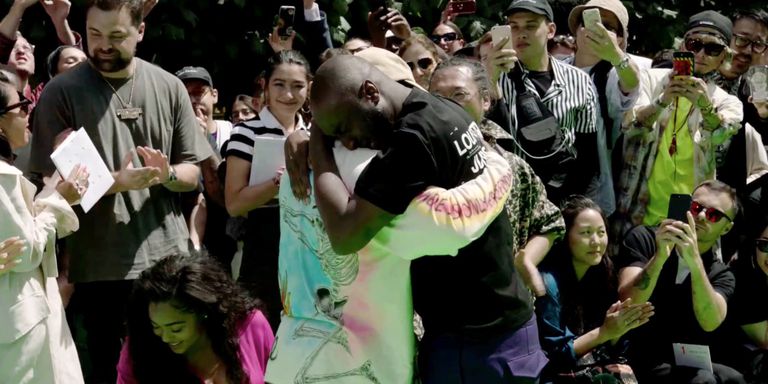 Another menswear designer debut was British designer Kim Jones at Dior Homme.  Jones, the former menswear artistic director for Vuitton since 2011, pre-Abloh, helped revitalize the house for a younger generation. His show was also one of the most anticipated of the season with a front row filled with celebrities ranging from Kate Moss to Victoria Beckham. For his Dior Homme collection, Jones announced that is was time for couture values to be imported into menswear, and dubbed his collection “romantic, rather than feminine,” according to Vogue.com. He opened his show in ‘royal fashion’ with Prince Nikolai of Denmark wearing a classic shirting-stripe, turned inside out, and paired the look with sneakers. Looking to the  past with a futuristic eye, Jones recreated many prints that referenced the late Monsieur Dior. For example: beautiful jackets with tiny feathered flower motifs made to replicate the pattern on Dior porcelain dinner plates, toile prints that imitated the walls on the Dior Boutique in 1947 and the bee motif Dior used in 1955. Jones even gave a shout out to John Galliano with his inclusion of tiny saddle bags. Among the sea of toile prints and florals, there were beautifully tailored suits, effortless trousers and terrific outerwear. Jones mastered the balance between fashion fantasy and commercial hits. 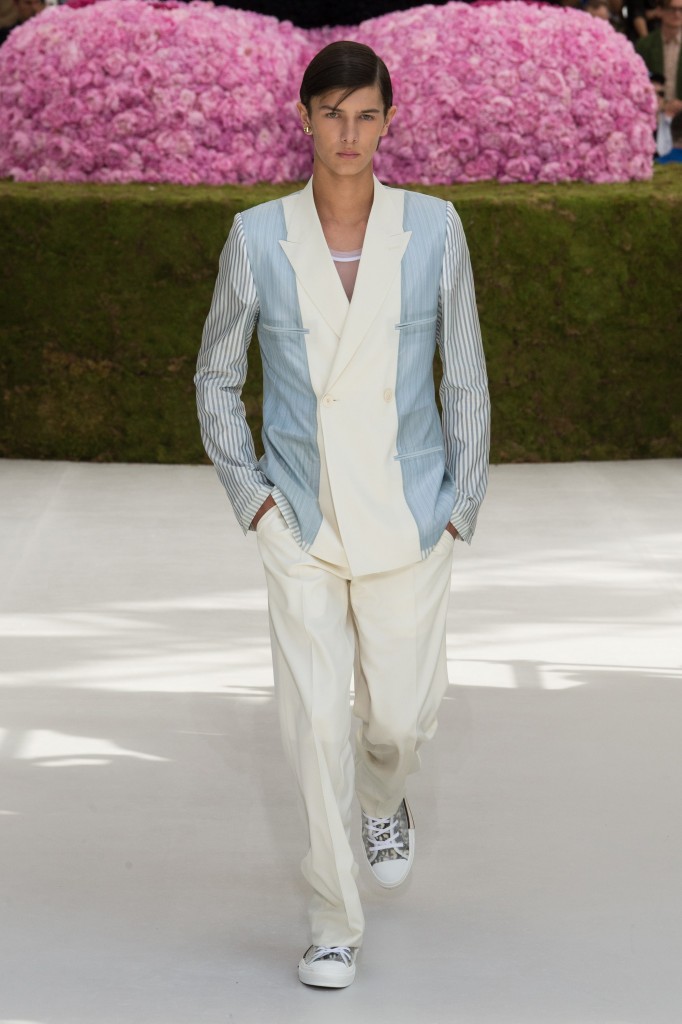 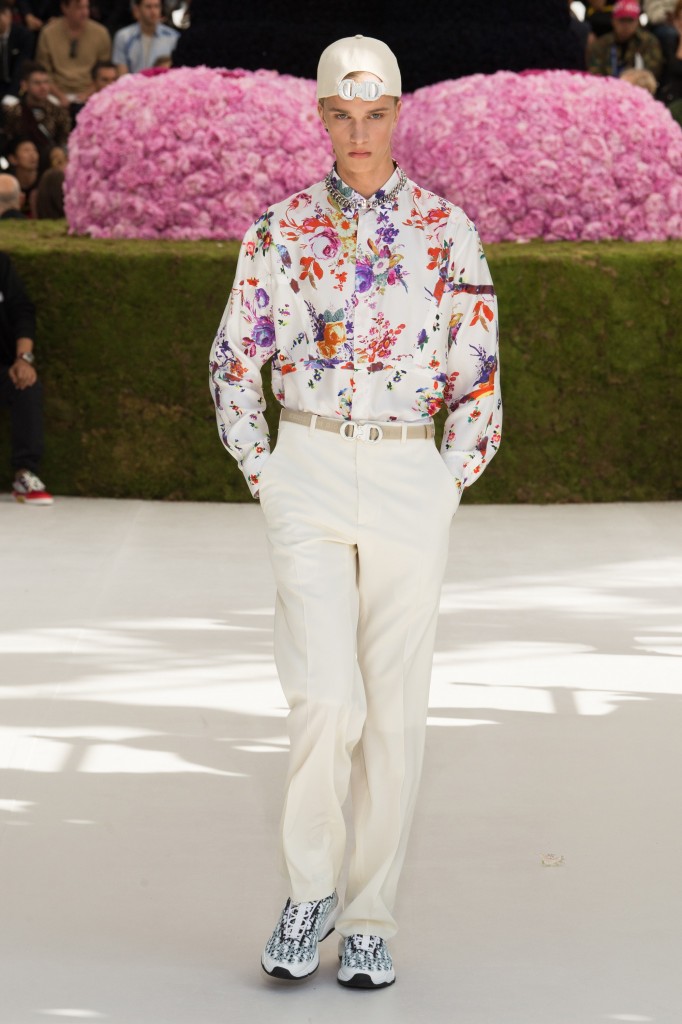 John Galliano, known for his Vionnet -inspired bias cut gowns (among other things) brought couture references to his  Maison Margiela collection that he called ‘Artisanal’ menswear.  An absolute first for menswear! In a category where tailoring is the usual mainstay, Galliano told Vogue.com, “It’s the highest form of dressmaking, but for men . . . I hope it’s going to define a new sensuality, a new sexuality.” In a podcast released to the press, Galliano explained why he decided to  elevate his men’s collection to couture level. Part of it was an epiphany about the shifting codes of formalwear that he had seen at the Met Gala. “Seeing the youth present, and their interpretation of black-tie . . . a seismic change from the last time,” he said. Another part of the decision stemmed from his daily dialogues with interns at the Maison Margiela studio. But possibly the biggest reason was, he was just raring to exercise his dressmaking skills and bring imagination to menswear.

Galliano’s mixed British bespoke tailoring and couture techniques and the end result was a sexy and glamourous menswear collection. There were plenty of iconic Galliano moments, such as his use of corsetry as well as flamenco and bullfighting references from his Gibraltar roots. 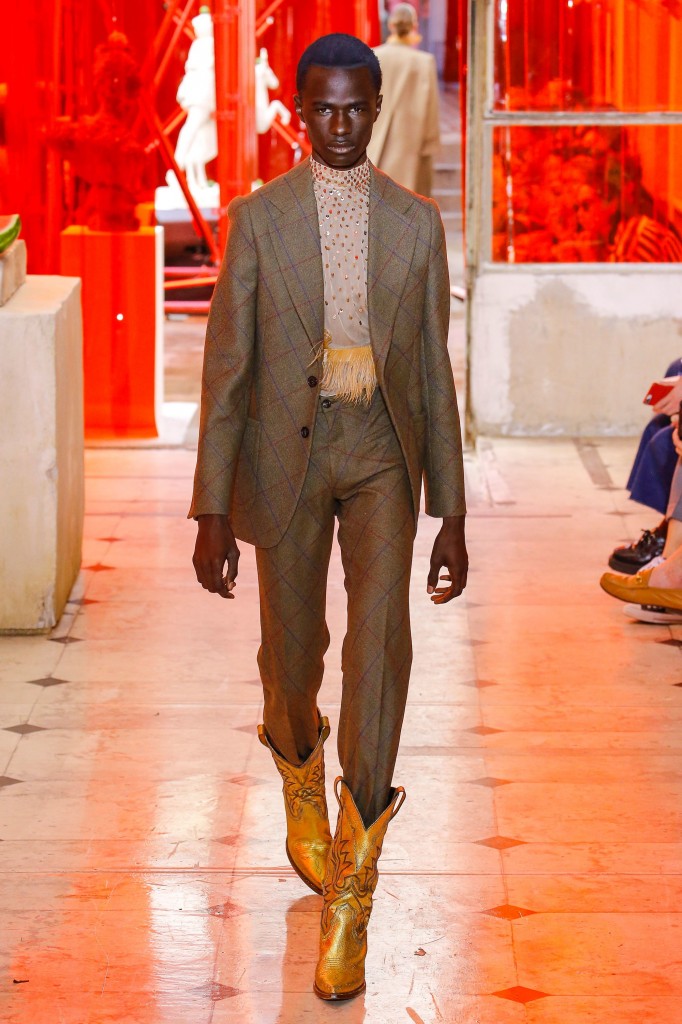 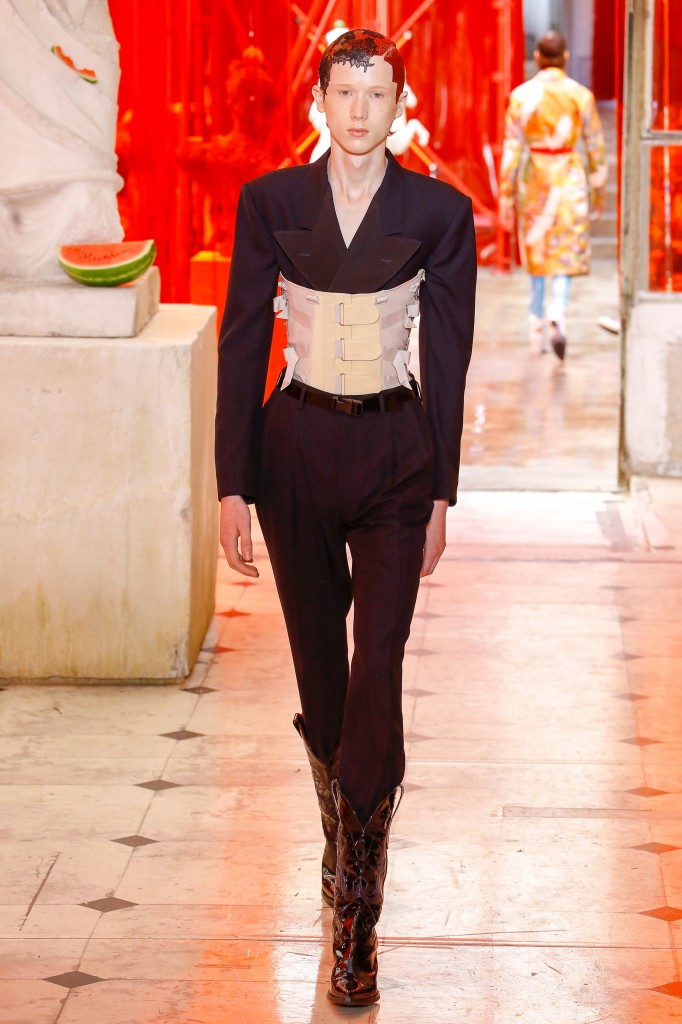 After presenting three collections during New York Fashion Week, Raf Simons decided to return to where it all started for him as a designer, Paris, to show his menswear collection.

After many years of streetwear-inspired looks ruling the menswear runway (think Supreme, Off White, Kim Jones for Vuitton, etc.) and with every fashion-forward boy and girl owning a plethora of designer hoodies and sneakers, Raf Simons is looking to change that. The cult favorite menswear designer showed a highly energized collection of tailored looks with New Wave club references. His collection was a consistent parade of beautifully tailored jackets and coats, mostly in satin, all in bold colors. It was New Wave at its best with references to Stephen Sprouse and elevated glamour that he was responsible for bringing to New York downtown 80s club scene. Simons was quoted as saying: “There are all these references to punk, like  safety pins and studs and black leather, but I was thinking of how to do them in a way that was not that—so you don’t recognize them.”  That’s where it got interesting. There were glimpses of tiny knots of diamanté jewelry and silver D-rings embedded here and there, suggestive of piercings and fetish. And, wittily, a twisted translation of plastic six-pack holders, made into a version of a punk string vest. “Like when kids hang out, carrying their beers,” as Simons put it. “But also, like Paco Rabanne.” 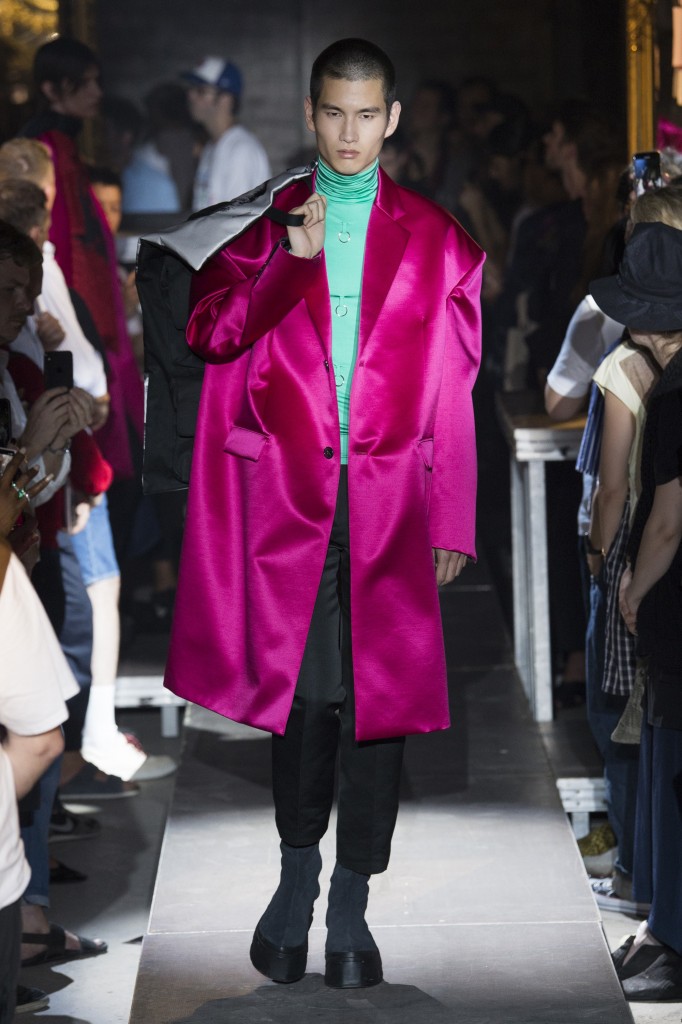 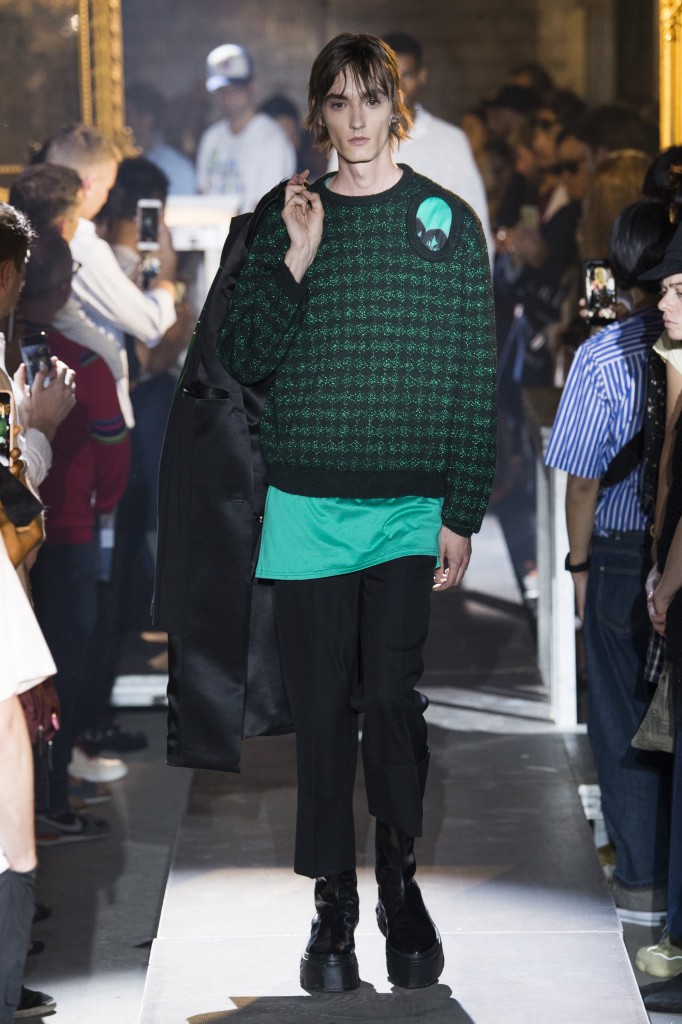 Italian-Belgian fashion designer Anthony Vaccarello took us back to 1978 for his spring Saint Laurent collection. How inspiration was a party Yves Saint Laurent hosted to launch his Opium fragrance, which was held on a ship docked at New York’s South Street Seaport and featured a giant bronze Buddha with thousands of orchids flown in from Hawaii. Forty years later, Vaccarello hosted an equally impressive, ultra-modernized version of that event across the Hudson at New Jersey’s Liberty State Park.

Vaccarello said he wanted to represent “the idea of New York, the idea of the icons of New York, in the ’70s.” Parts of that were Studio 54 in verve: a diamanté shirt placket and  a double-breasted blazer with a gold-trimmed peak lapel. But more so, it was the New York’s dive-ier Max’s Kansas City that sprung to mind— the sort of dirty glamour that has proven itself an immortal style, with distressed denim hoodies, patchworked boots, and show-stealing high-waisted, boot-cut trousers with just a slightly amplified flare at the kick. Vaccarello noted that these were new.

The highlight of the spectacle was the finale, when every model made their final walk in silver disco ball body paint – the moment was pure Studio 54 glamour. 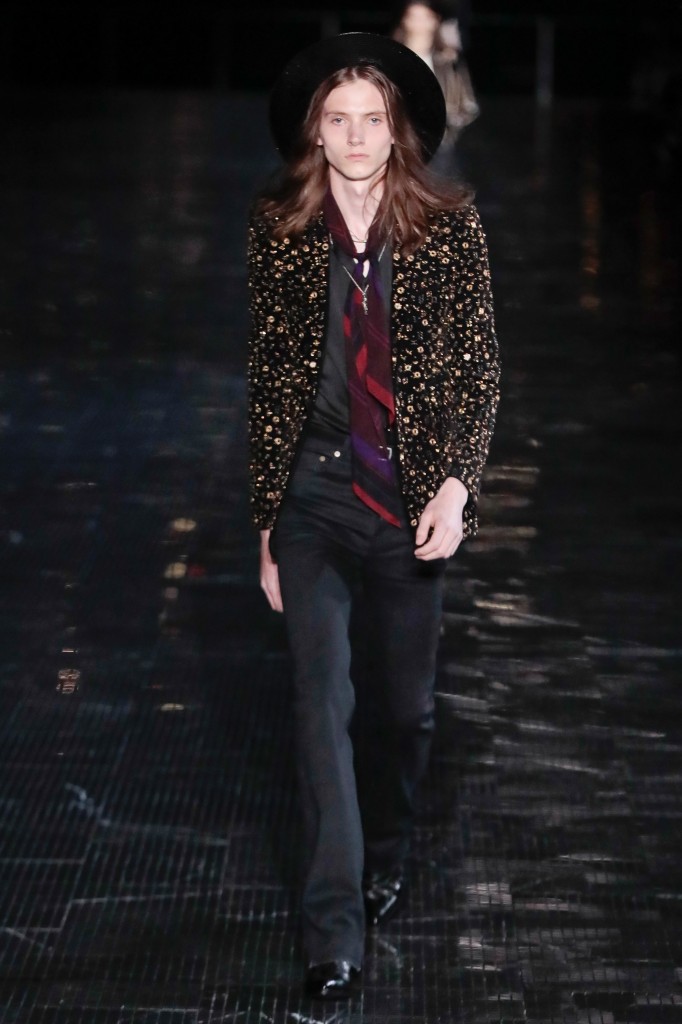 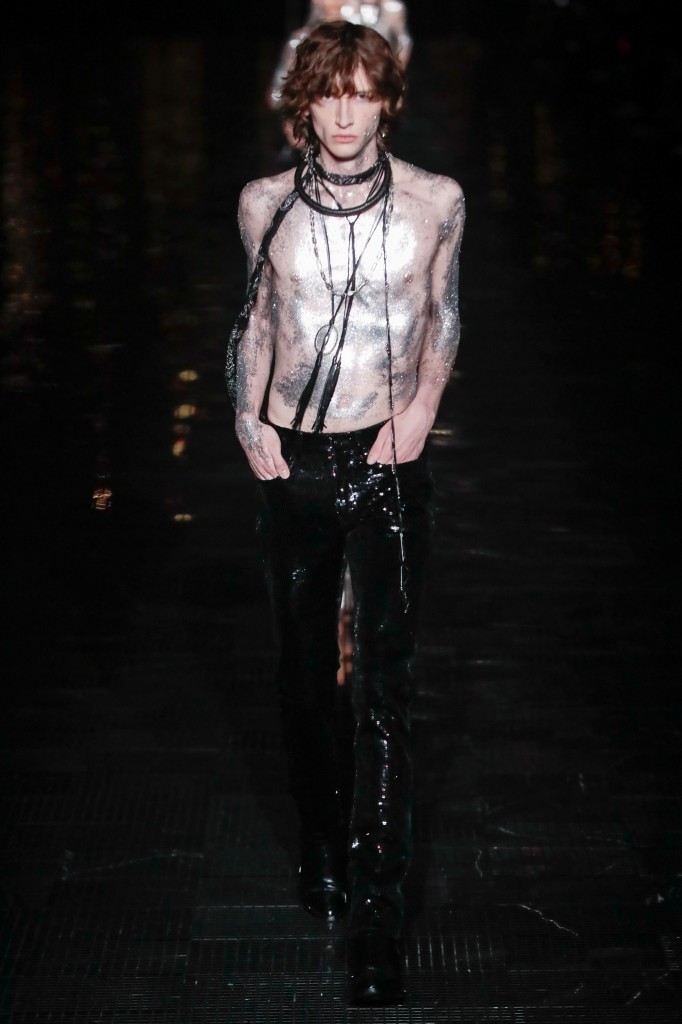 So tell us, what where your favorite moments from Men’s Spring 2019 shows so far?