It’s the holiday season and what better way to stay warm and toasty than to knit your own sweater? Or better yet, give the unique gift of a ‘handmade’ knitted sweater or poncho scarf?

In the spirit of giving, UoF is offering their once-yearly subscription discount so that you can learn how to knit (plus 500+ other videos to learn from). A UoF yearly subscription was $189 is now $149, or take advantage of our $5 off the first month of our monthly subscription (was $19.95). But the offer expires on Jan 1, 2023, so get a move on!

If you are looking for inspiration, we’ve compiled some knit looks to whet your appetite, followed by links to our lessons that will teach you knitting techniques. Have a ball! The craft of hand knitting has been practiced for thousands of years. Where and how this art was originated is still a mystery but many believe that Arabian nomads carried the craft into Europe. Still others think knitting originated in Persia, but regardless of where the craft began knitting is one of the original ‘textiles’.

Knitting is the practice of using two or more needles to pull and loop yarn into a series of interconnected loops. The word is derived from the Dutch verb ‘knutten’ or ‘knot’,  which is similar to the Old English ‘cnyttan’, “to knot”. Originally, knitting, like woven textiles, fulfilled the basic human need for protection against the elements, but as we all know, hand knitting has become less a necessary skill and more of a hobby.

The oldest knitted artifact are socks that date back to the 11th century Egypt. They are a very fine gauge, done with intricate color work and some have a short row heel, which requires the purl stitch. 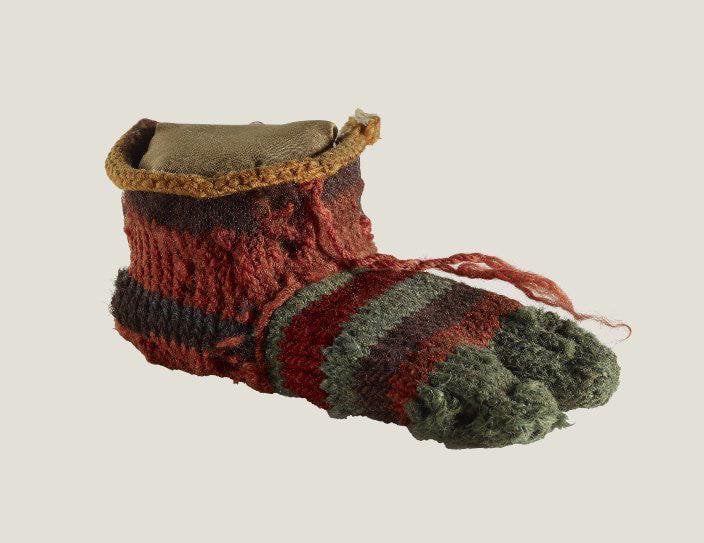 The predecessor to knitting and crocheting was a process known as Nålebinding, a technique of making textiles by creating multiple loops with a single needle and thread, much like sewing. Some artifacts, for example 3rd-5th century CE Romano-Egyptian toe-socks, used the “Coptic stitch” of nalbinding.

During Medieval times, knitting was controlled by guilds. Knitted garments were worn only by the wealthy class. But by the 16th century knitting had advanced into a craft. During the Elizabethan era, knitting schools were established in Britain. Knitted stockings provided a revenue for the poor. These stockings were exported to Germany, Holland and Spain. During this time period men wore short trousers, so fitted stockings were a fashion necessity. A knitting technique, known as Dales knitting, began at the end of the 16th century. Items from this cottage knitting industry are preserved in the Museum of Hawes in Wensleydale.

Knitting is also significant in Scottish history. During the 17th and 18th centuries entire families were involved in knitting garments, especially sweaters, which were important to the fisherman of the Scottish Isles. Fair isle and cable patterns were used to knit sweaters. In addition, during the French-Napoleonic wars, woman gathered together to knit socks and mittens for the soldiers. This practice continued through both World War I and World War II.

Fair Isle knitting, named after one of the Shetland Islands north of Britain, is an intricate pattern believed to be knitted around 1850, yet some historians believe that fair isle knitting was inspired in 1588 when a Spanish ship was destroyed off Fair Isle and the crew encouraged native knitters to create new knitting patterns. The Prince of Wales wore a fair isle sweater in 1921. 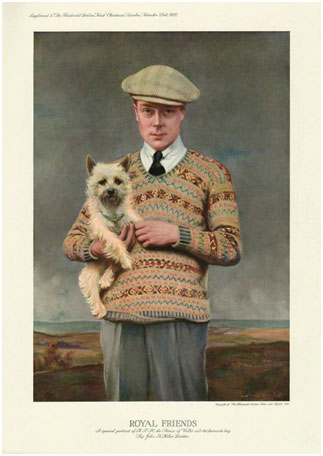 The famous image of the Prince of Wales, later Edward VIII, wearing a Fair Isle sweater in 1921. (Photo Credit: Fraserknitwear) Today, however, there is a renaissance of hand knitting. Various techniques from around the world are being combined and specialty yarns have been created from various fibers. The results have been quite impressive. Knitting has become fashionable, even celebrities including Julia Roberts, Winona Ryder, Dakota Fanning, and Cameron Diaz have been seen knitting, which has helped popularize the revival of the art of knitting.

So, why not cozy up with a cup of tea and watch our instructional videos on how to hand knit and crochet. Each lesson lists the yarn amounts and the tools you’ll need. Oh, by the way, Marcie, our instructor is a knit/crochet pro. Let these resort 2023 looks inspire your next creation. Check out these UoF lesson previews to inspire you!

So tell us, what would you like to hand-knit this holiday season?