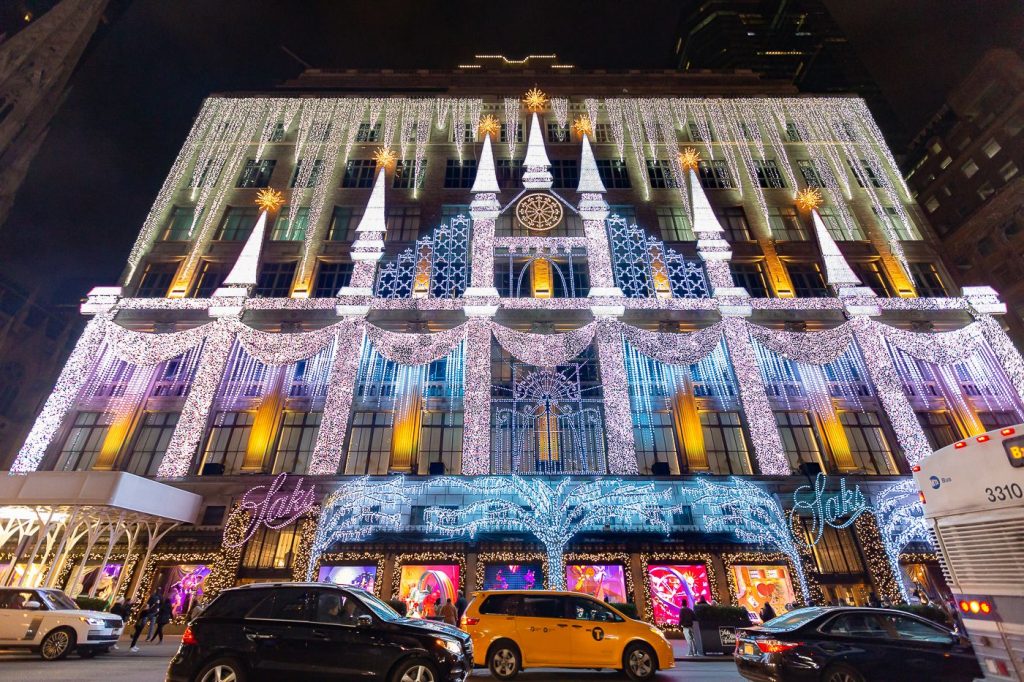 It’s the most wonderful time of the year…..especially for stores as the holiday season is one of the most profitable times of year for retailers. In New York City, both department stores and boutiques alike get festive with creative windows that tourists and city residents line up to view. Last winter, due to the pandemic, most retailers opted for more minimalistic displays; but for the 2021 season, stores such as Macy’s, Saks Fifth Avenue, Bloomingdale’s, and Bergdorf Goodman have pull out all the stops with their window displays. Their exceptionally positive holiday windows are sending good vibes out to the city streets. 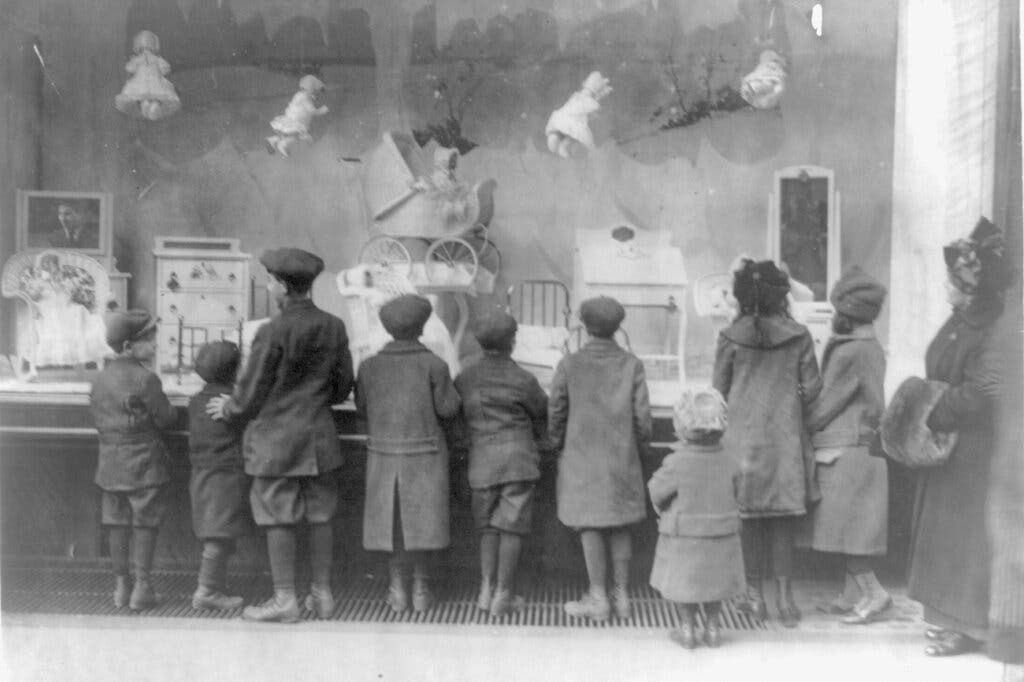 Macy’s is acknowledged as bringing holiday windows to New York City in 1874, with an extravagant display on 34th Street in Herald Square. Over the years, now-shuttered retailers along Fifth Avenue, namely Lord & Taylor, B. Altman and I Magnin,  competed to outshine each other with dazzlingly creative holiday window installations that drew crowds, inspired family traditions, and gave tourists another reason to visit New York City in December.

“Most of them did not feature merchandise,” said Sheryll Bellman, the author of Through the Shopping Glass: A Century of New York Christmas Windows. “It was to delight the public. It was their gift to the city.”

This year, with retailers optimistic about the holiday shopping season, these creative and magical windows are drawing shoppers and fans of visual merchandising in droves to the city. They ogle and ogle and of course take selfies in front of the windows. Sometimes for good causes. 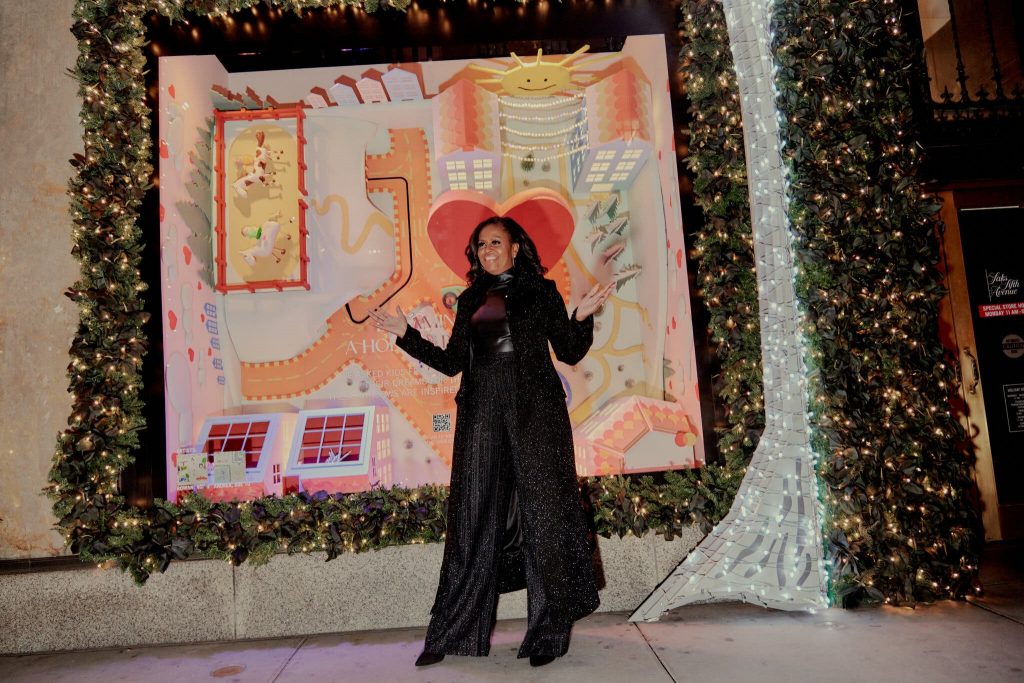 Saks Fifth Avenue’s flagship store in New York City, who has some of the most impressive holiday windows, drew former First Lady Michelle Obama. Mrs. Obama was there to promote a partnership between Saks and the Obama Foundation’s Girls Opportunity Alliance. December is the month for giving, and the department store donated $1 million to the foundation. Some of Saks’ windows featured looks from a few of  Ms. Obama’s favorite designers, Jason Wu, Philip Lim and Oscar de la Renta, with 100 percent of the net proceeds this year going to the foundation. The collections not only included clothing, but also housewares, beauty, and accessories. 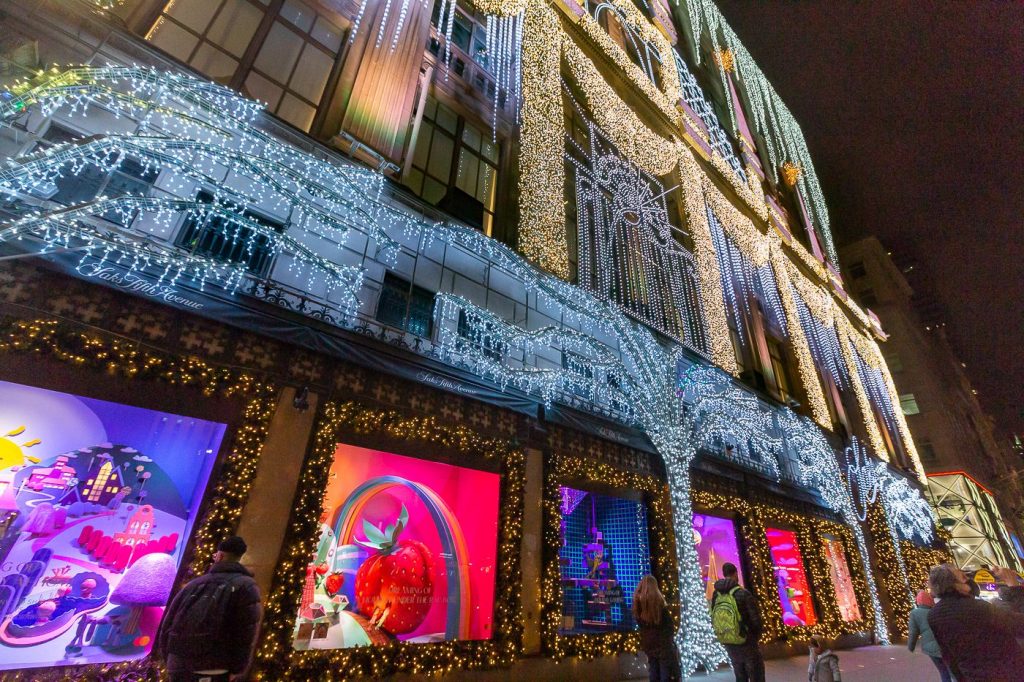 According to Andrew Winton, senior vice president of creative at Saks, who oversees the holiday displays, the company asked NYC children to draw and describe their holiday dreams — of homes, beaches, and games —and then the Saks window artists brought those images to life. “The style is sort of candy-coated imagination,” said Winton in an interview with The New York Times. 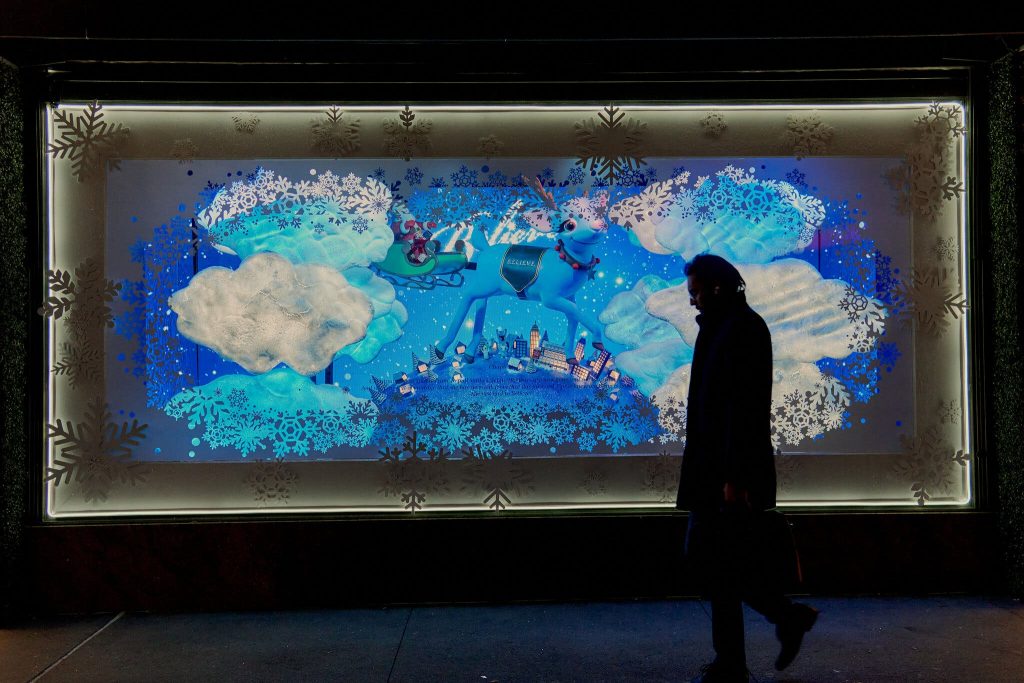 This season, Macy’s holiday windows tell the story of Tiptoe, a spunky reindeer who goes on a magical journey as she dreams of flying, attending flight school, and ultimately joining Santa’s crew. “Macy’s Herald Square is the home for holiday magic and our iconic Broadway windows have for more than 100 years showcased animated wonders that inspire and delight,” said Manuel Urquizo, National Director of Visual Campaigns and Windows for Macy’s to The New York Times. “With Tiptoe, we have created a whimsical story highlighting the important power of belief and the joy and wonder of the season.” 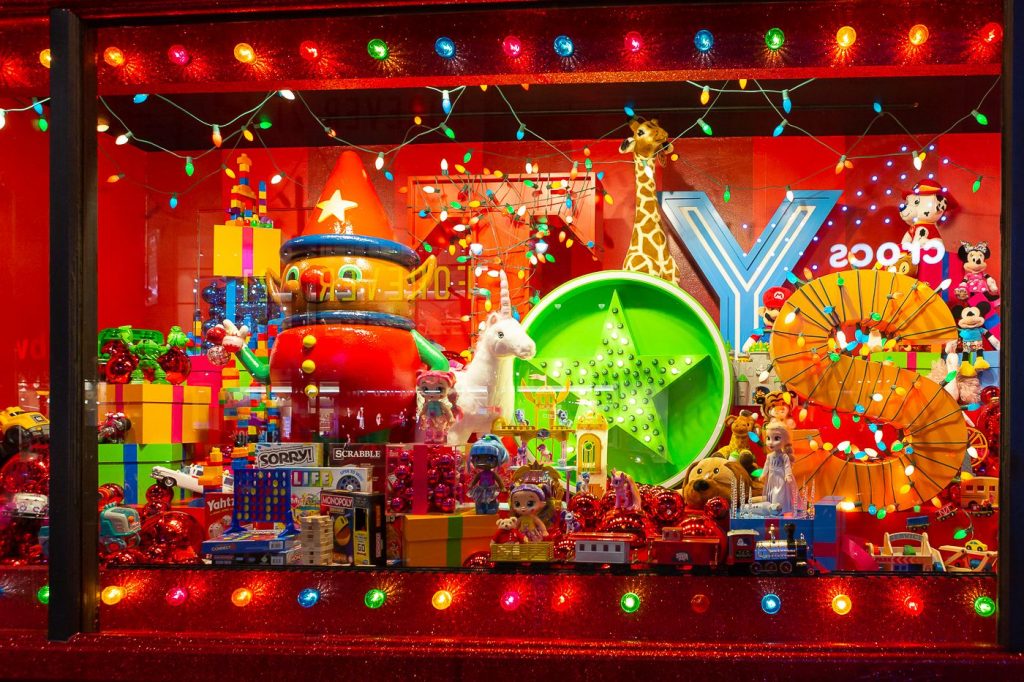 Holiday cheer also filled the streets in front of Bloomingdale’s as the store’s visual team stuffed the Lexington Avenue windows with items that delighted them as children. One window displayed a T. Rex covered in ornaments riding a skateboard. Another window a hot pink mannequin in glitter roller skates twirling around in a sequined clamshell. 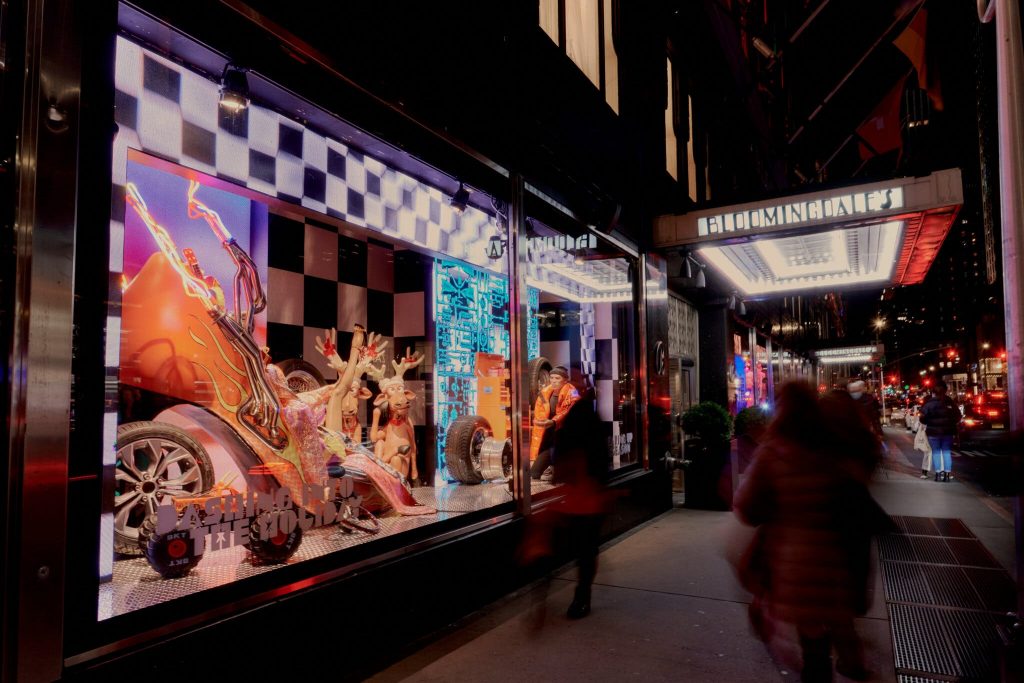 The windows at Bloomingdale’s are stuffed with oversize toys. (Photo Credit: The New York Times)

“Every year, we look forward to our holiday unveiling event as a gift to our customers and the city of New York. And, this year, we are even more excited to come back together and celebrate,” said Frank Berman, Executive Vice President and Chief Marketing Officer, Bloomingdale’s in an interview with Gothamist. 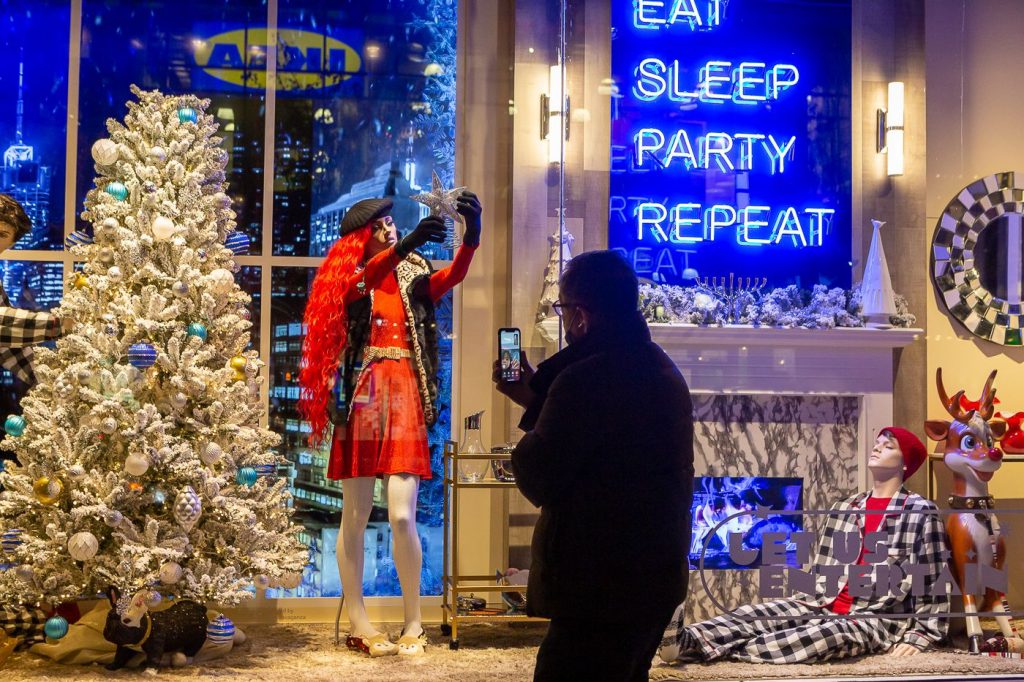 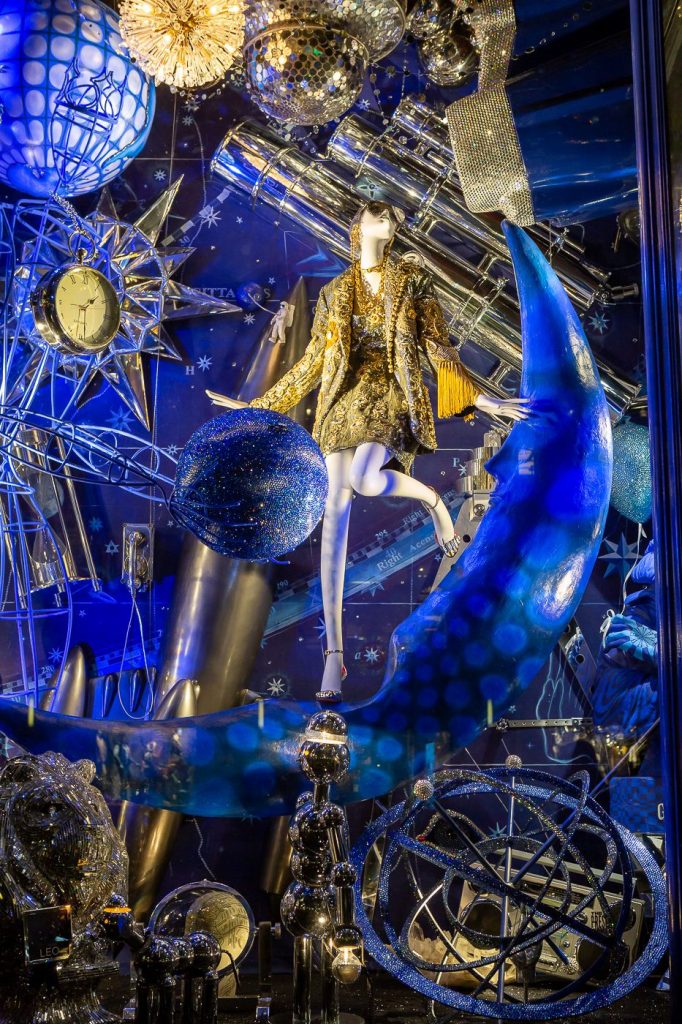 In one holiday display, there was a mermaid wearing a sequined magenta dress by C.D. Greene resting on a bedazzled motorcycle surrounded by pointy-nosed fish. In another window, a mannequin wearing an embroidered gold Schiaparelli dress and jacket is dancing on the moon.

Each installation celebrates a different mood: adventurous, harmonious and frisky. David Hoey, Bergdorf’s senior director of visual presentation, told The New York Times that the windows were inspired by a psychedelic sculpture of a green bird. “Last year was kind of minimalism,” Mr. Hoey said. “This year is maximalism which is our trademark.” 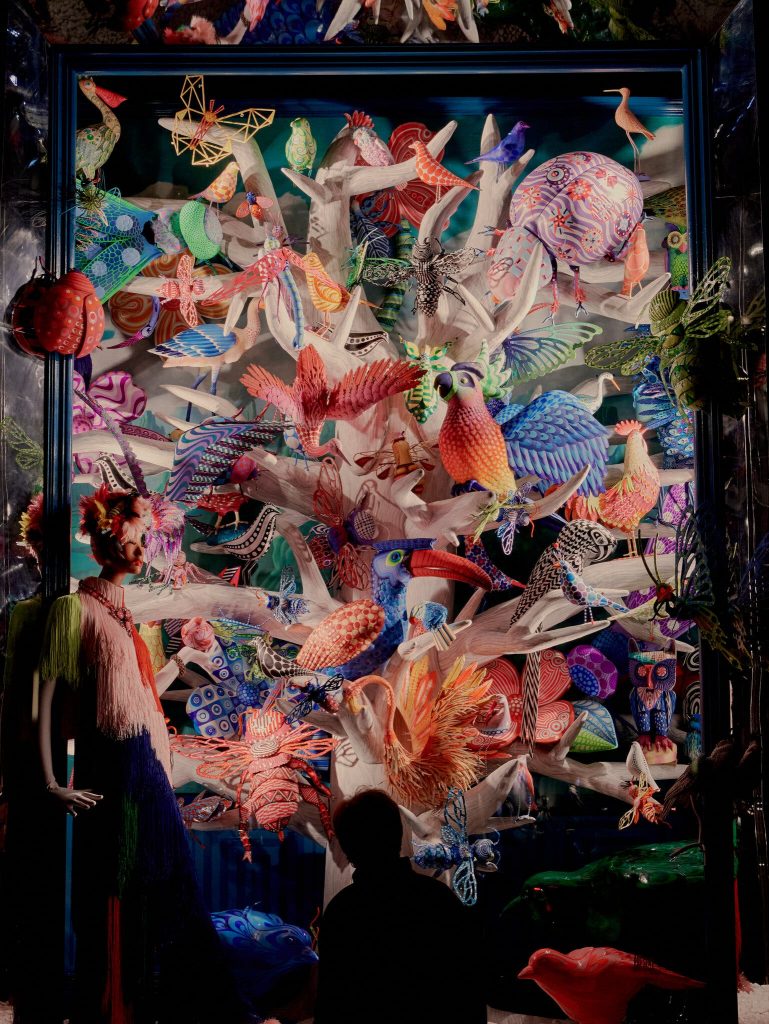 “These windows are extremely complicated to install, considering the layers of scenery and props,” Hoey told Yahoo. “Windows are usually tight spaces. It’s like sensory overload. We purposely overstuff these windows in a designed kind of a way, attempting to induce an aesthetic delirium. To us, they are extremely holiday and festive. A state of mind. While we don’t necessarily have Santa Claus, we do have a spirit of holiday.”

If you’re a fan of store windows and in-store displays like we are, check out our new 9-part series on the art of visual merchandising, taught by Parsons & UoF professor Marcie Cooperman. You’ll find them in our Fashion Business Discipline. 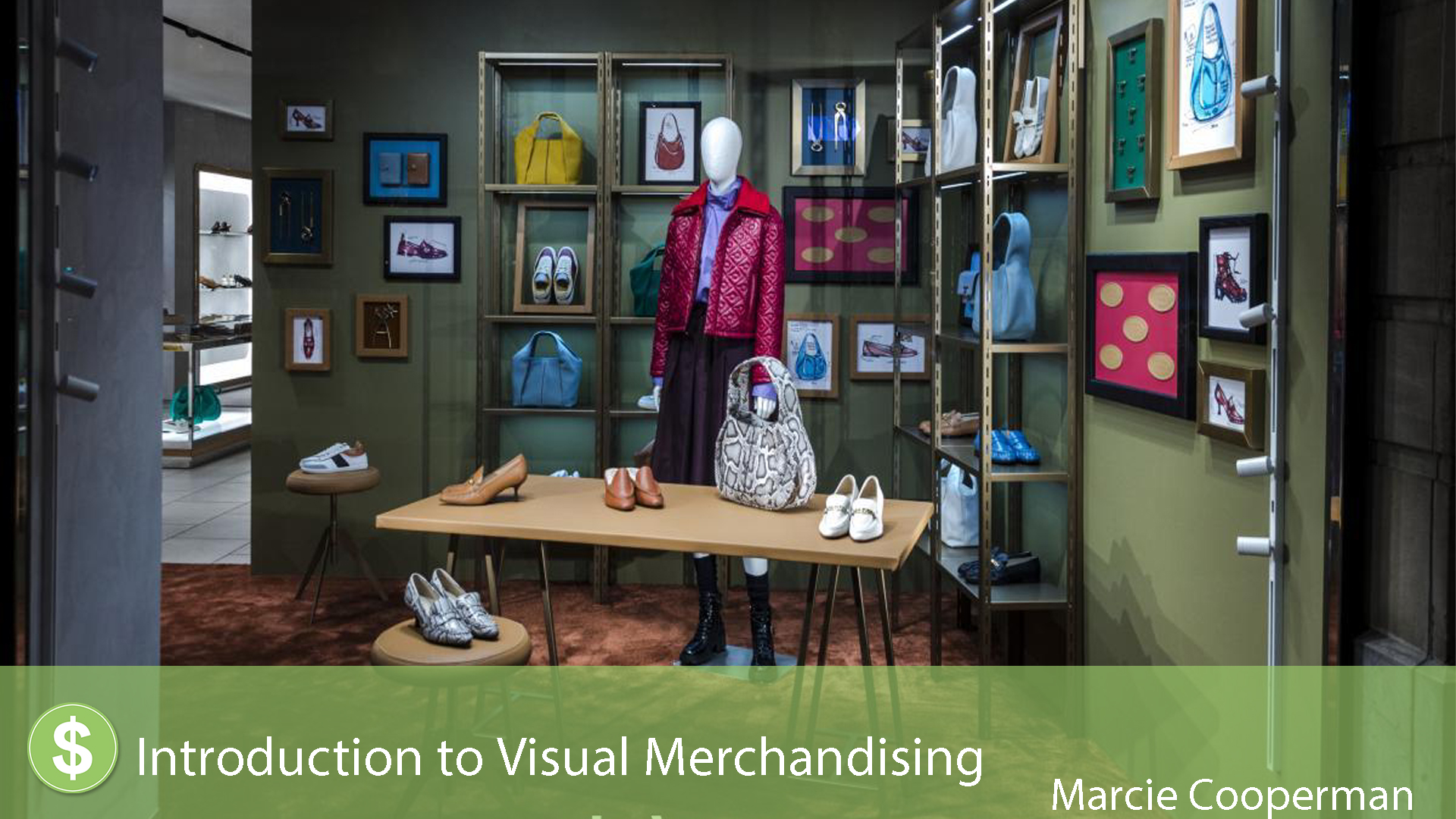 Take advantage of our once-yearly subscription deals. Gift that fashionista in your life or heck…why not treat yourself?

Or get $5 off the first month of our Monthly subscription (was $19.95 now $14.95) https://www.universityoffashion.com/holiday-offer/ Promo Code: Promo21

SO TELL US, WHICH RETAILER DO YOU THINK HAS THE MOST CREATIVE HOLIDAY WINDOWS?