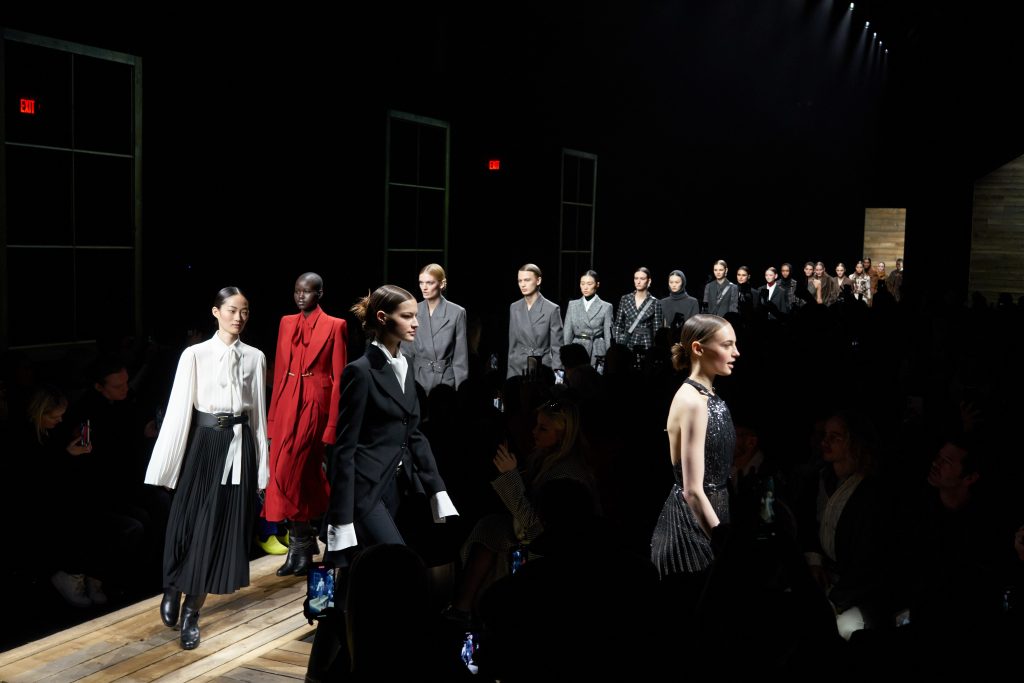 In November 2019, The University of Fashion posed the question; “Are Fashion Shows Still Relevant?” that blog post covered the history of fashion shows and why designers still prefer a show. While many argued that fashion shows were an outrageous expense, designers mostly felt that it was worth it if they attracted Instagram Stars and Fashion Bloggers. Today, fashion shows are more about exposure and how many “likes” the’ll get on social media than selling clothes.

This season there were many changes to New York Fashion Week’s calendar. Tom Ford skipped NY and decided to show in LA, Tommy Hilfiger is showing in London, Telfar is showing in Florence and Ralph Lauren is skipping the runway altogether.  So, with so much change, it’s not surprising that famed fashion blogger Bryanboy asked if somebody could look into “why NYFW [has] pretty much died?”

While this may seem like an exaggerated question, it’s a valid one, as designers continue to search for unique places and ways to create buzz. They’ve tried live-streaming shows, opening up their shows to the public, showing their menswear and womenswear collections together, and they even tried to entice sales by showing buy-now-wear-now collections (which ultimately failed). But as we all know, today, consumers shop differently, especially due to the internet. And, unlike their predecessors, Gen Zers are more concerned about their carbon footprint and issues surrounding  over-consumption than they are about the runway.

So, why should designer’s invest thousands of dollars on a runway show? Well according to Jeffry Aronsson, the former CEO of Oscar de la Renta, Marc Jacobs and Donna Karan, who currently consults luxury brands on growth strategies, told Fashionista, that at its core, “the business case for investing in a seasonal fashion show, or any other fashion event, is that it should get the brand the attention of the market and press.” Aronsson states that the measures of success come in the form of online impressions (including social commentary and likes), editorial coverage (both digital and print) and, though difficult to quantify, word of mouth, which helps raise brand awareness, desire and, hopefully, sales.

Erin Hawker, communications expert and founder of Agentry PR, notes that a brand can get 50 to 100 press hits in one single day globally after a runway show (and even double that if there are big-name celebrities involved), as well as millions of earned impressions on social media. “If you assign an editorial value to shows with or without celebrities, it’s usually in the tens of millions of dollars’ worth of impressions,” Hawker says. “This far surpasses the cost of a show.”

So, designers have been listening carefully to the experts. And for those who chose to a have runway show, those brands pulled out all the stops to make it a memorable; a spectacle that their consumers would enjoy, as they watch the videos and images that blow-up their social media feeds. Oh, and in the end…hopefully generate sales.

Here are some images of the more memorable NYFW shows of the Fall 2020 season: 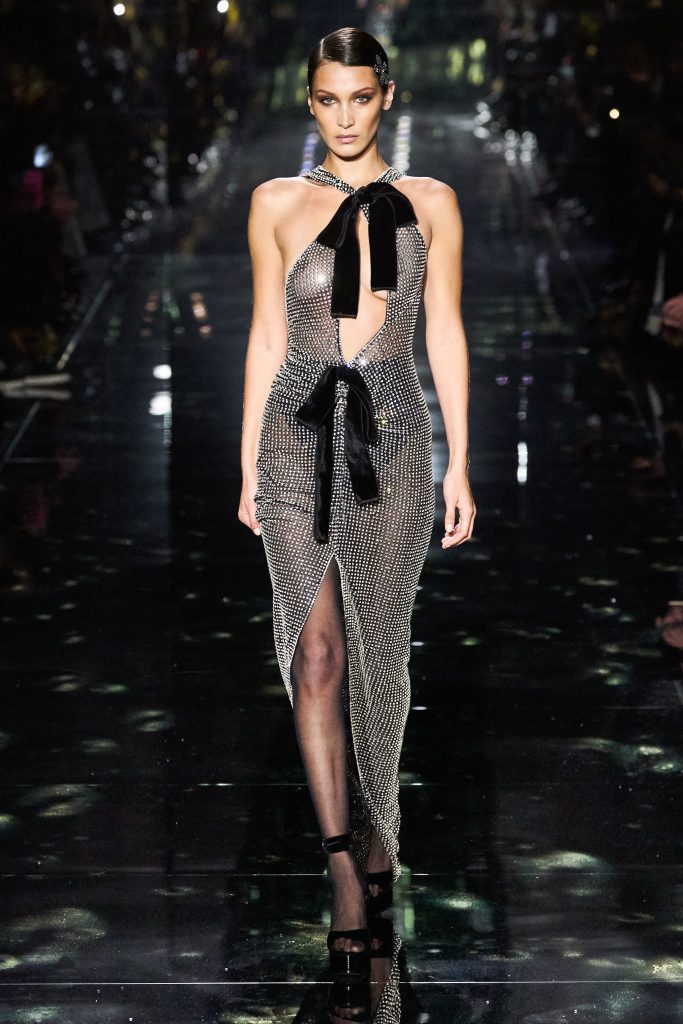 Mr. Ford opted to show in Los Angeles because of the Academy Awards, which took place on Sunday night (Feb. 9, 2020) at the start of NYFW. In a statement to Women’s Wear Daily, Mr. Ford said “the excitement in L.A. on that particular weekend” was a big factor in his decision.

As for the show, it was a star-studded extravaganza and one of the biggest pre-Oscar events. Everyone was there from Jennifer Lopez and Renée Zellweger to Miley Cyrus and Lil Nas X to James Corden and Jon Hamm. There were so many power players, that some celebs were even pushed back to the second row.

As for the clothes, they were infused with Mr. Ford’s signature glam, mixed in with streetwear elements. Case in point; a chic oversized leopard print coat, worn over a sweatsuit. The collection also featured plenty of menswear inspired high-waisted, baggy trousers paired with logo sweatshirts and topped off with terrific outerwear. For evening, Mr. Ford turned up the glitz with bold colored turtleneck sweaters paired with sequin maxi skirts, delicate lace dresses and a show-stopping crystalized halter gown.

This extravaganza was anything but the traditional runway show. 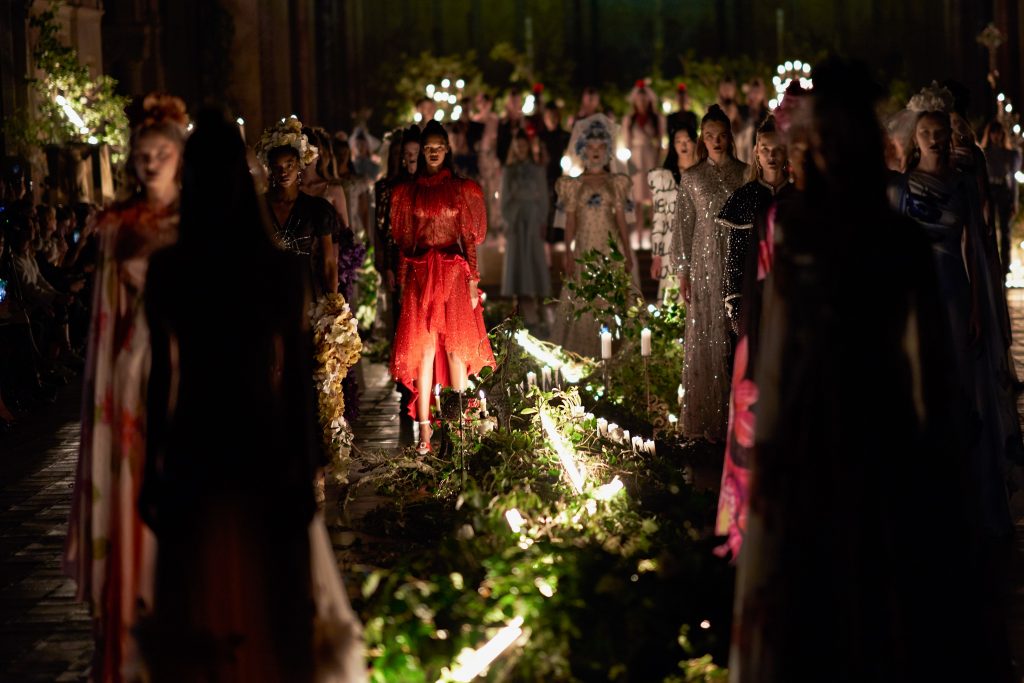 Laura and Kate Mulleavy have always been inspired by theatrics and Hollywood for their beloved label Rodarte. For Fall 2020, the sisters looked to vampires for inspiration, more notably, Bram Stoker’s 1897 novel Dracula, which in turn inspired—Francis Ford Coppola’s indelible 1992 adaptation of the book, starring Winona Ryder. The sisters found the perfect setting as the backdrop to the gothic tail; a dimly lit St. Bartholomew’s church in Midtown Manhattan.

While the Mulleavy sisters created a cinematic goth setting, the clothes were anything but. The collection featured a nod to the forties with playful polka-dot dresses, dramatic pouf sleeve blouses and bold floral gowns. Then, things became dramatically dark and sinister with cobweb embellishments on a few gowns, as well as black fringe capes that resembled clumps of witches’ hair. Laura and Kate Mulleavy returned to their gothic roots in a fashionably haunting way. 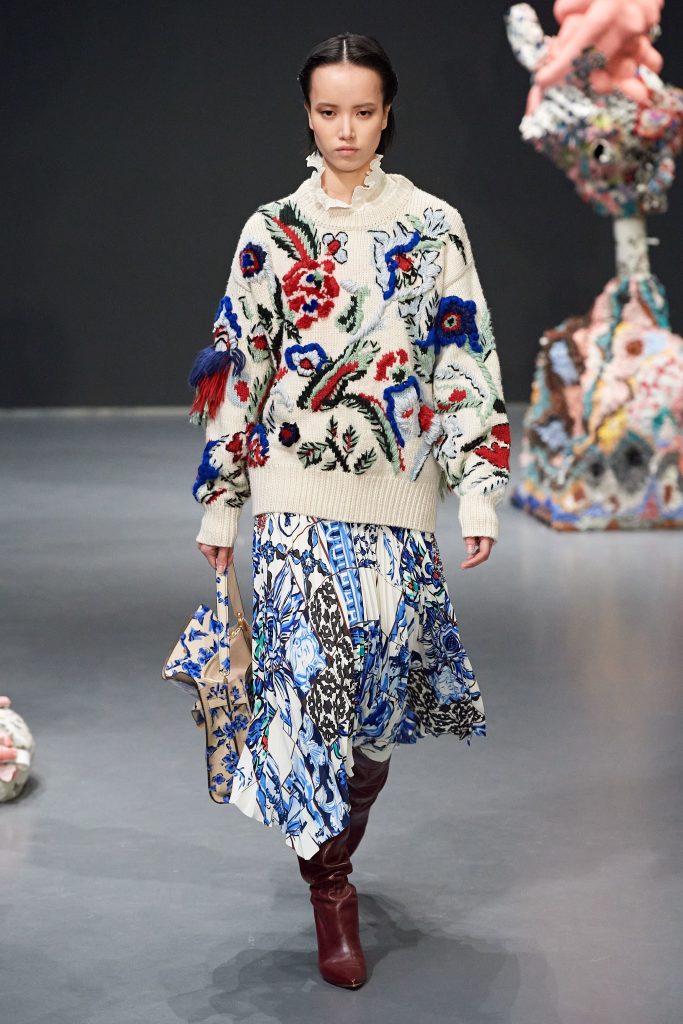 Forever the art aficionado, Tory Burch chose the iconic Sotheby’s as her latest show venue as models strutted among the auction merch. It was the ideal location for her Fall 2020 collection as it was a happy jolt of vivid floral prints in everything from tailored suits to cozy sweaters and everything in between. Burch was inspired by the Francesca DiMattio’s ceramic sculptures (which were situated on the runway) and had the artist design many of the floral prints found in the show. Bravo Tory Burch for creating such a joyful collection in these unsettling times. 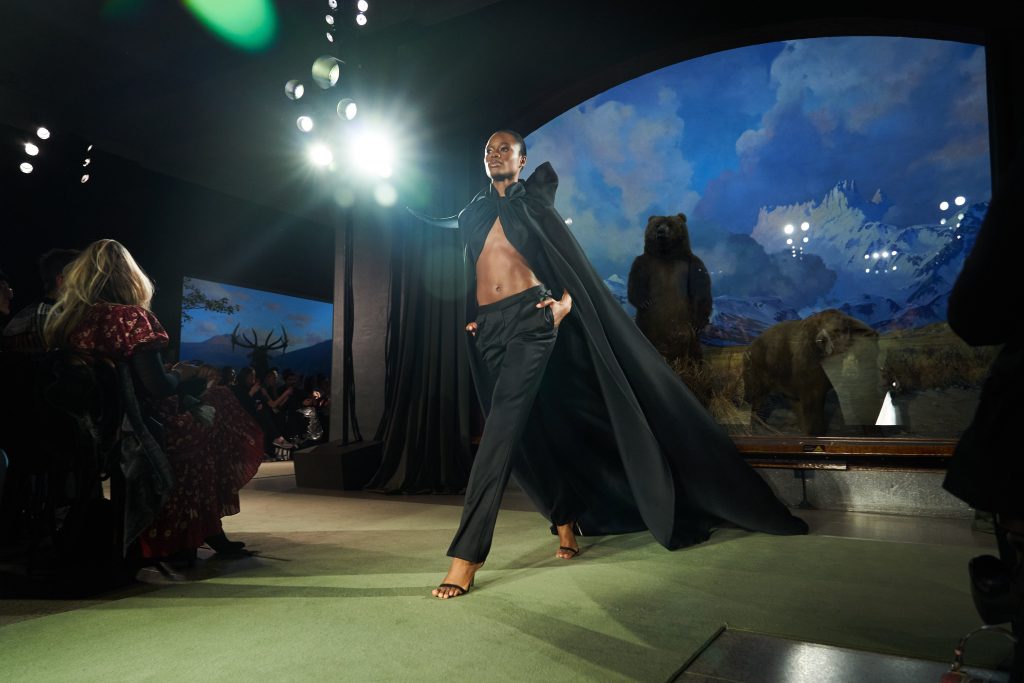 One can always expect to have fun at Brandon Maxwell’s show. In the past he even served Shake Shack to editors before his show.  For Fall 2020, the celebrity stylist-turned-designer did not disappoint. He showed his youthful eveningwear at the American Museum of Natural History with their iconic dioramas  of ‘taxidermied’ moose and grizzlies. It was like a genuine slice of Americana. Maxwell also offered plenty of daywear this season with beautifully tailored outerwear, chic knits and low-cut trousers. For night, there were a few sheer numbers that felt out of place, but overall, this was a strong show, one that proves Maxwell is more than just a red-carpet designer. 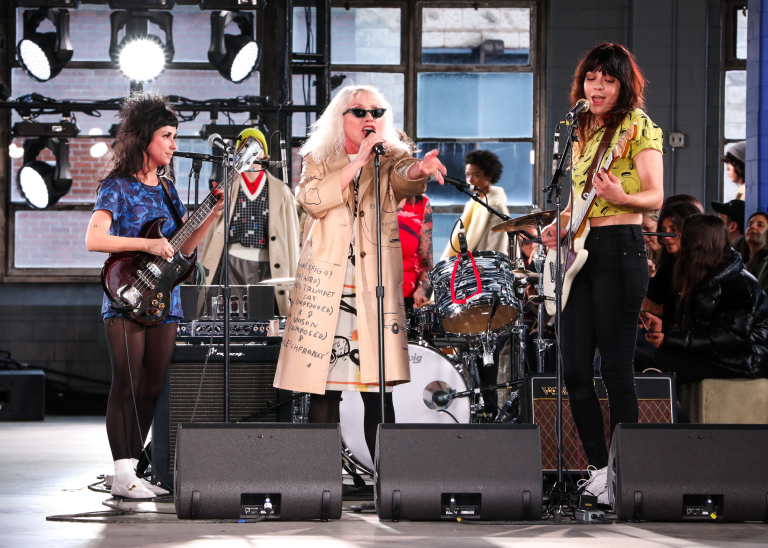 Coach’s Creative Director, Stuart Vevers, likes to draw inspiration from artists and has often incorporated their work into his collections. In the past, he’s featured works by Keith Haring (Spring 2018), Kaffe Fassett (Fall 2019) and Richard Bernstein (Spring 2020). For Fall 2020, he referenced Jean-Michel Basquiat — not just by weaving his drawings into his ready-to-wear and accessories  but also by bringing some of his family members to the show. The late artist’s niece, Jessica Kelly, actually walked the runway! She, and the rest of the models, made their way across a warehouse-turned-runway — meant to replicate the feel of a city loft — all while the legendary Debbie Harry performed on stage. 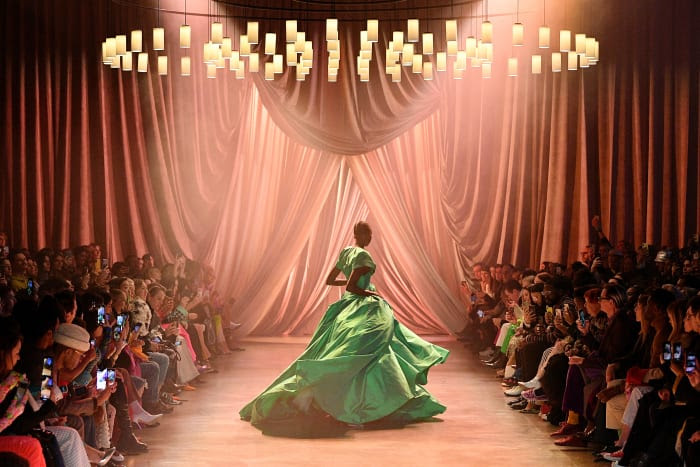 Recent CFDA/Vogue Fashion Fund Award winner, Christopher John Rogers, brought back old-school glamour but with a modern twist for his Fall 2020 collection. His gowns were bold and vivid, perfect for young scarlets wanting to stand-out on the red carpet.

Rogers infused saturated hues into his collection and is fast becoming known for his shapely silhouettes. Think balloon sleeves, voluminous skirts and innovating draping – all in oversized, exaggerated shapes. 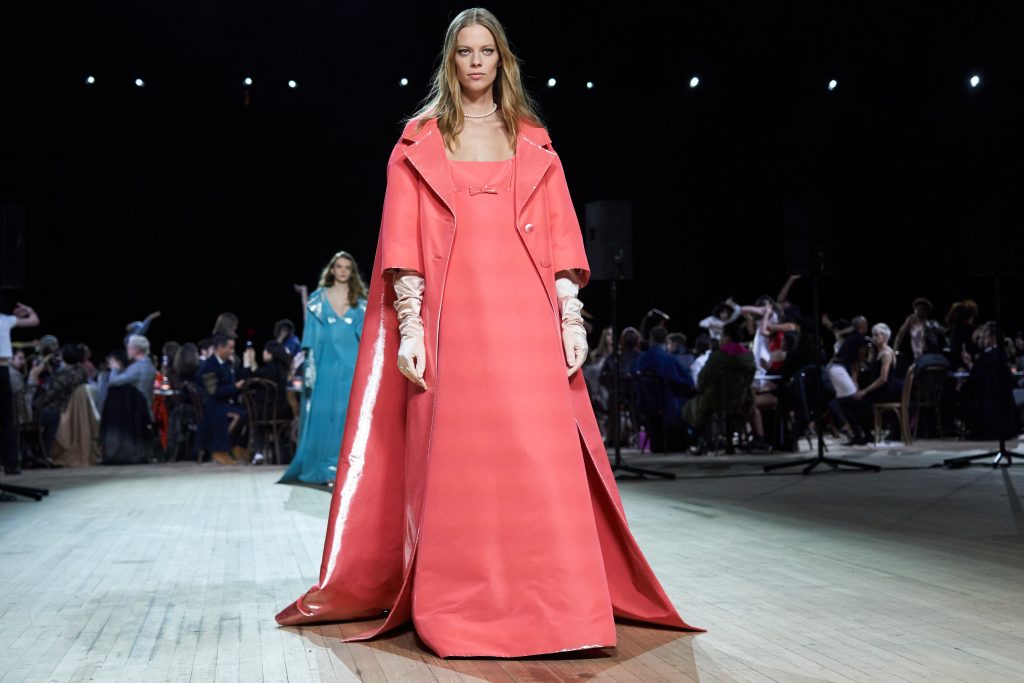 Everyone looks forward to the end of NYFW because of the Marc Jacobs show. For Fall 2020, the designer didn’t disappoint.  The show began with a surge of energy. Dancer/choreographer Karole Armitage, found the spotlight in the darkness of the Park Avenue Armory and reminded us that, why in the 80s, she earned the nickname the “punk ballerina.” Although her performance was brief, it was electrifying. Following Armitage, a crew of dancers followed, creating an entertaining and engaging backdrop; the dancers were clad in Marc Jacobs dance pieces, such as bras, slip dresses, skirts, basic T-shirts and black pants.

As for the clothes, it was a nod to the Sixties – Jackie Kennedy, Rosemary Woodhouse, the mods – all with a touch of nineties minimal. It was pure Marc in the early days of his career. He showed three-button A-line coats, pastel minidresses with matching jackets, tailored suits and simple sweaters worn over straight leg trousers; Miley Cyrus made an appearance on the runway wearing a black bra and trouser. For evening, Jacobs created a number of sequin sheath dresses in a variety of colors and a pink opera coat worn over a gown with a tiny bow at the bust that had Jackie Kennedy written all over it.

It wouldn’t be NYFW without a bit of controversy, right (in addition to Tom Ford showing in LA, Tommy Hilfiger in London and Jeremy Scott in Paris)? Well, thanks to a New York Times article, we learned that NYFW shows leave the biggest carbon footprint when it comes to travel, buyers, and brands.

So tell us: Time to rethink the runway show?