So, what’s all the buzz about TikTok?  Wasn’t it supposed to be a national security risk according to U.S. Senators Tom Cotton (R- Arkansas), and Chuck Schumer (D-New York)? In 2019, these senators asked the U.S. Director of National Intelligence to conduct a security assessment of the Beijing-based video-sharing platform, especially as it related to their data-collection policy.

And what about the most recent headlines, whereby the U.S. government is charging Chinese military officers in the 2017 Equifax hacking of social security numbers and other sensitive data stolen from nearly 145 million Americans?

Are we really ok with sharing our data with TikTok? Well it looks like some fashion industry brands think so. In 2019, Ralph Lauren, launched its U.S. Open campaign on TikTok and was joined by other brands like Sephora, Calvin Klein and Fenty Beauty. In January 2020, Women’s Wear Daily launched their @WWD TikTok account featuring behind-the-scenes coverage from Fall/Winter international fashion weeks, industry events and celebrity coverage. According to Business of Fashion, TikTok is sending three TikTokers to fashion week 2020 in an attempt to create some buzz among the platform’s target audience, Gen Zers.

To get some history and a better perspective on TikTok, we asked our resident Gen Zers, Noelle Conklin and Toph Dorry, what they think:

“TikTok used to be called Musical.ly, but since being sold to ByteDance Ltd. on November 9, 2017 things have been changing within the app. Users can become famous from videos with no context. Users can also go live to reach out to their fans and make money from donations. New trends on TikTok have spread to clothing lines and dancing. I see people on the street and in schools wearing the trends and dancing to TikTok songs.

TikTok allows us to lip-sync to songs and dance to them, which in this era there really hasn’t been an app with this much sing, dance, and sparkle. You can also get promoted through the app, as well as collab (collaborate) with other businesses on the platform. TikTok lets you record for fifteen to sixty seconds so the user can get more content in that time frame rather than just a six-second clip like on Vine.

Most people that use or have seen TikTok have heard of Charli D’amelio, Nathan Berno, and Lilhuddy. They all have a specific style. Charli and Lilhuddy have a 90s aesthetic style and Nathan has an E-boy (Emo Boy) style. Some of the negative aspects of trying to become famous are how you look. Most of the time people who are famous on TikTok are all skinny and well-groomed. Not saying that you shouldn’t be well-groomed, we all need hygiene!

Other reasons as to why TikTok draws us into the app is because of its aesthetic. The app has multiple effects to add to your videos. You can easily edit your video with just a click of a button. Now you don’t even need to use editing software, you can just make a video, and cut out whatever edits you like.

Another reason why TikTok drew most of us in was because of Vine. Vine was an internet platform that came out in the mid-2000s where you could make short six-second videos and post them on the internet. Vine closed and was forgotten until TikTok came along. However, a Vine reboot launched on January 24, 2020 called Byte where creators can earn steady ad-share revenue” – Noelle Conklin 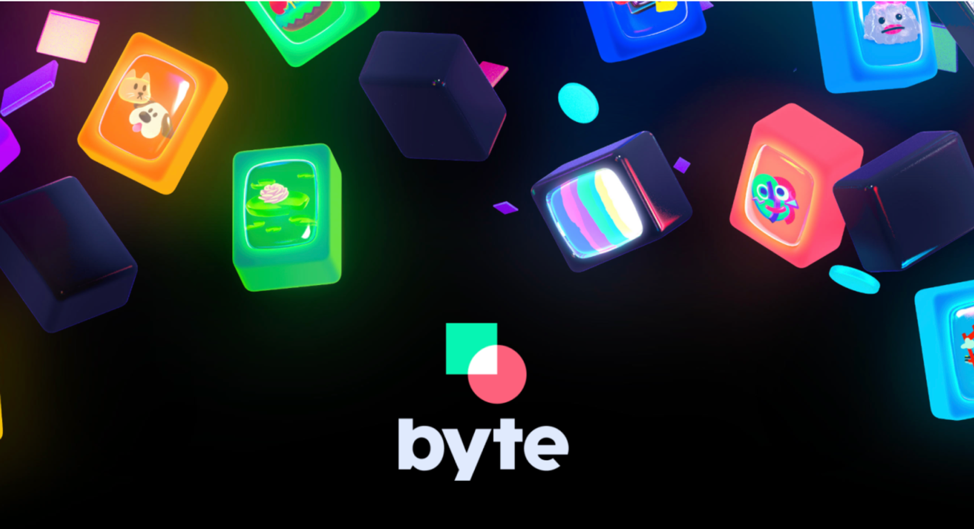 “TikTok has grown its base relatively quickly into 400 million daily users and is becoming a very popular and very well-known app. With TikTok, you can record a video and put sound on top of it or record a video with your own sound, or a mix of both.

There are so many things you can do on TikTok, from hundreds of thousands of user-created sounds to their many filters. A huge majority on TikTok are funny videos, or things happening with a funny audio track playing along with the video. By September 2019, TikTok was rated the #1 non-gaming app available on the app store and peaked with 6 million installs in December.

TikTok will most definitely influence fashion due to the fact that anybody can post whatever they want on their account. There are tons of videos of people showing off their outfits. Under just the hashtag “fashion” alone, there are 6.2 billion views, so there is definitely room for a lot of videos on fashion, along with many other hashtags that are included under fashion.” – Toph Dorry

All you need to do is to check out TikTok’s Pinterest page to get a sense of the demographic: 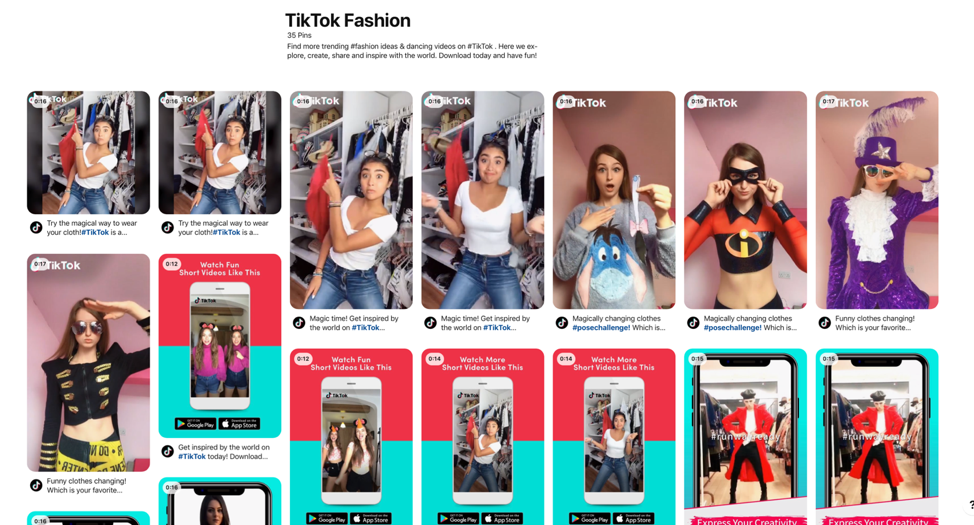 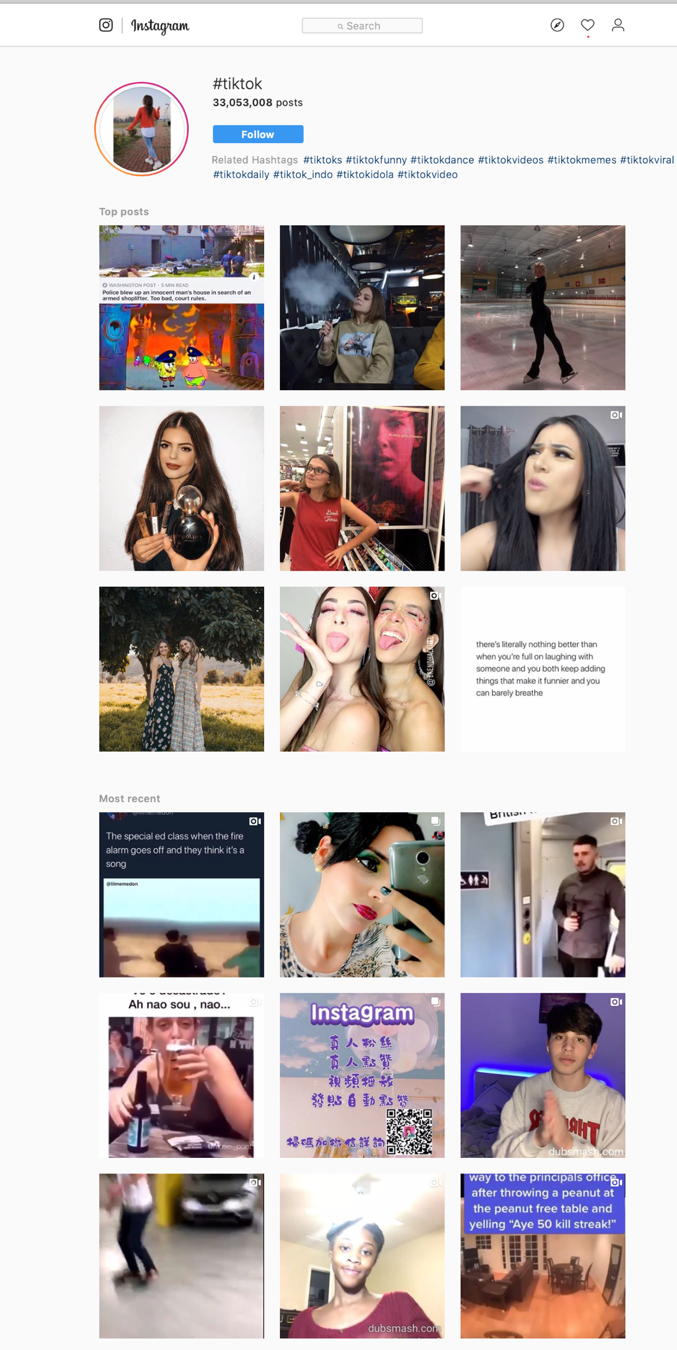 In an age where privacy is becoming all but impossible to control, call me old-fashioned, but I’m not so sure I want to compromise anymore of my personal data by posting to TikTok. What do you think?