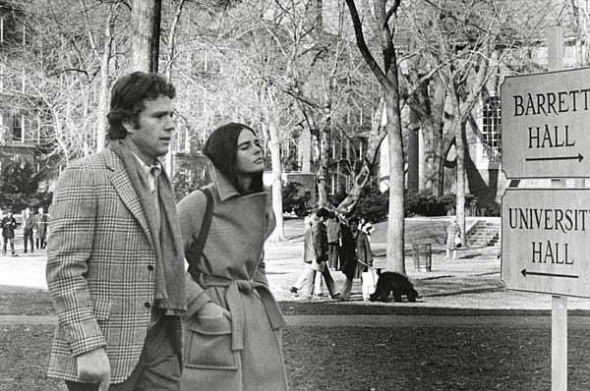 In last week’s blog, I talked about the music industry’s influence on fashion. So, this week I decided to explore the role the film industry plays in our industy. Let’s face it, films have always been a great escape for people around the globe. We can all get lost in the amazing characters, the scenery, the music, and, of course, the fashion. No matter what genre of movies you prefer, each cinematic experience can have an impact on our every day lives.

For decades, films have given us that “I must have it” fashion moment. Who can ever forget Julia Roberts in “Pretty Woman” (1990) as she radiates onscreen in her glamorous off-the-shoulder red gown created by Marilyn Vance. Shortly afterwards, every teenage girl wanted the knock-off version to wear to her prom.

The necklace scene from Pretty Woman. (Video courtesy of YouTube)

While not every film is able to create a trend, occasionally a movie or a particular character will come along and trigger a fashion trend or movement.

Since the early 1920s, when Hollywood first began producing films, society became obsessed with movie stars, especially their sartorial choices both on screen and off. In the early days of the film industry, costumes were chosen to recreate what people were sporting at the time. However, the ‘big 5′ film studios, RKO Radio Pictures, 20th Century Fox, Paramount Pictures, Warner Bros and Metro-Goldwyn-Mayer soon recognized the importance hiring fashion and costume designers to create their stars’ costumes. By the 1920s and 1930s, screen idols became public role models, largely due to the the right ‘package’: fashion, hairstyle and make up.

Today, movies and celebrities continue to influence fashion, some even becoming designers themselves. As every fashion designer knows, it is crucial to keep an eye on trends, especially in film. Think the movie Annie Hall and the Boho look, for example. What celebrities wear, both on and off screen, can either increase sales of a specific item or destroy an entire market. Case in point, in the film It Happened One Night, Clark Gable was seen without an undershirt and as a result, sales of undershirts plunged almost overnight. 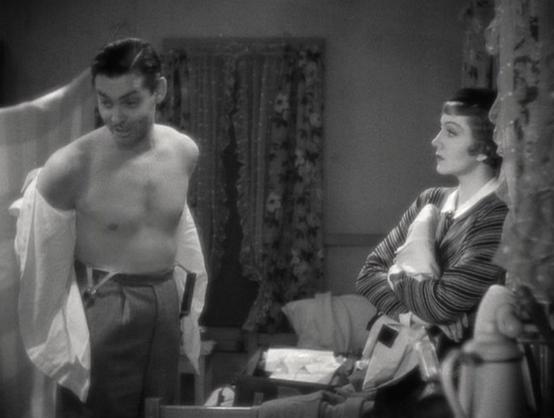 Clark Gable in It Happened One Night. (Photo Credit: Immortalephemera.com)

Between 1928 and 1941, Hollywood costume designers played a critical role in shaping fashion trends. Gilbert Adrian (1903–1959) headed the costume department at Metro-Goldwyn-Mayer (MGM Studios). Adrian was responsible for creating the signature styles of many of MGM Studio’s top actresses, and somewhat unknowingly, launched a variety of fashion crazes. Adriene was responsible for the popularity of gingham after he dressed Judy Garland in the pattern for the film The Wizard of Oz in 1939.

Another prominent Hollywood designer was Hubert de Givenchy (1927–2018), a favorite of influential actress Audrey Hepburn. He dressed her in such movies as Breakfast at Tiffany’s (1961), Sabrina (1954), and Funny Face (1957). Chanel may have been credited as the originator of the Little Black Dress (LBD), but it was Givenchy and Hepburn who reinvented it in Breakfast at Tiffany’s. The LBD continues to be an essential part of every woman’s wardrobe in every price point from couture to mass market. 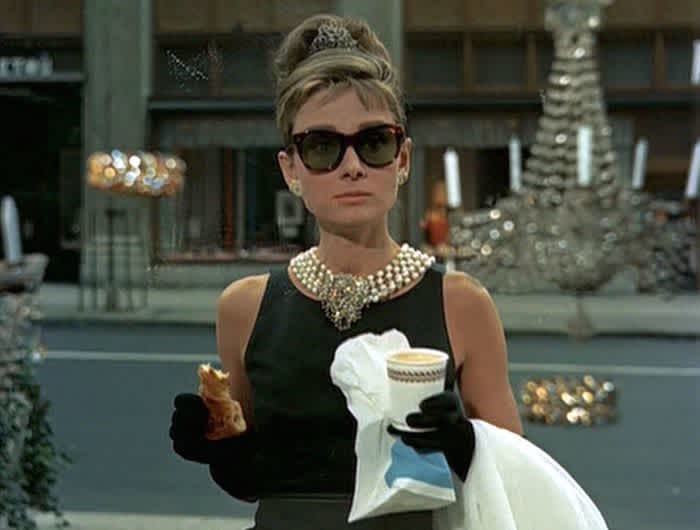 The iconic black dress worn by Audrey Hepburn in the opening of the 1961 romantic comedy film Breakfast At Tiffany’s. Photo Credit: PurpleClover.com

In the 1930s, movie stars such as Katharine Hepburn, Greta Garbo, and Marlene Dietrich pioneered the wearing of trousers, at a time when women were expected to express their womanliness by wearing dresses and skirts. These Hollywood legends proved to society that women could be just as sexy and feminine in pants as they were in dresses and skirts. 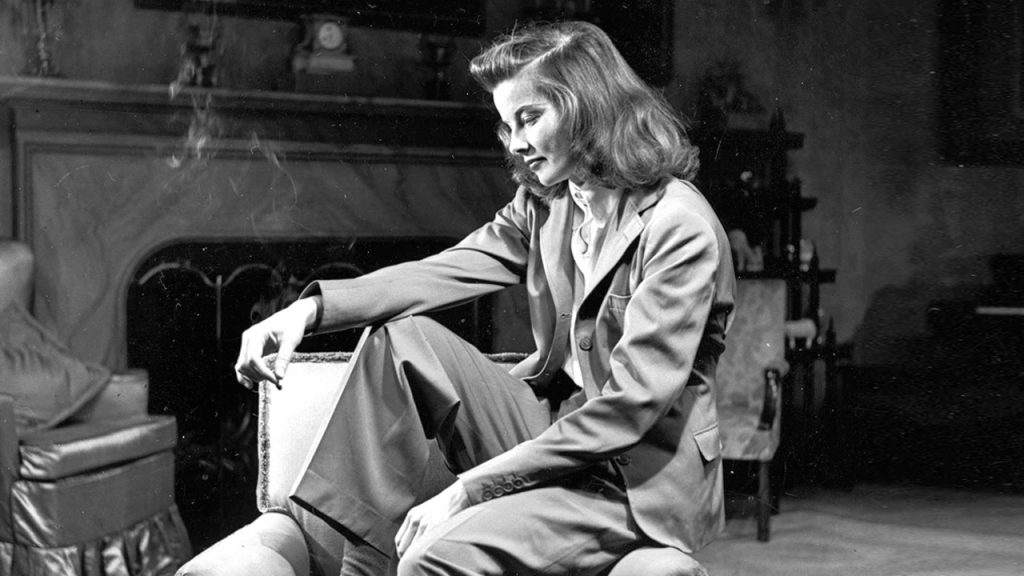 Katharine Hepburn was one of the first actresses to frequently wear pants. (Photo Credit: The Life Picture Collection/Getty images)

Here are some additional cinematic masterpieces that have influenced our fashion choices through the years. 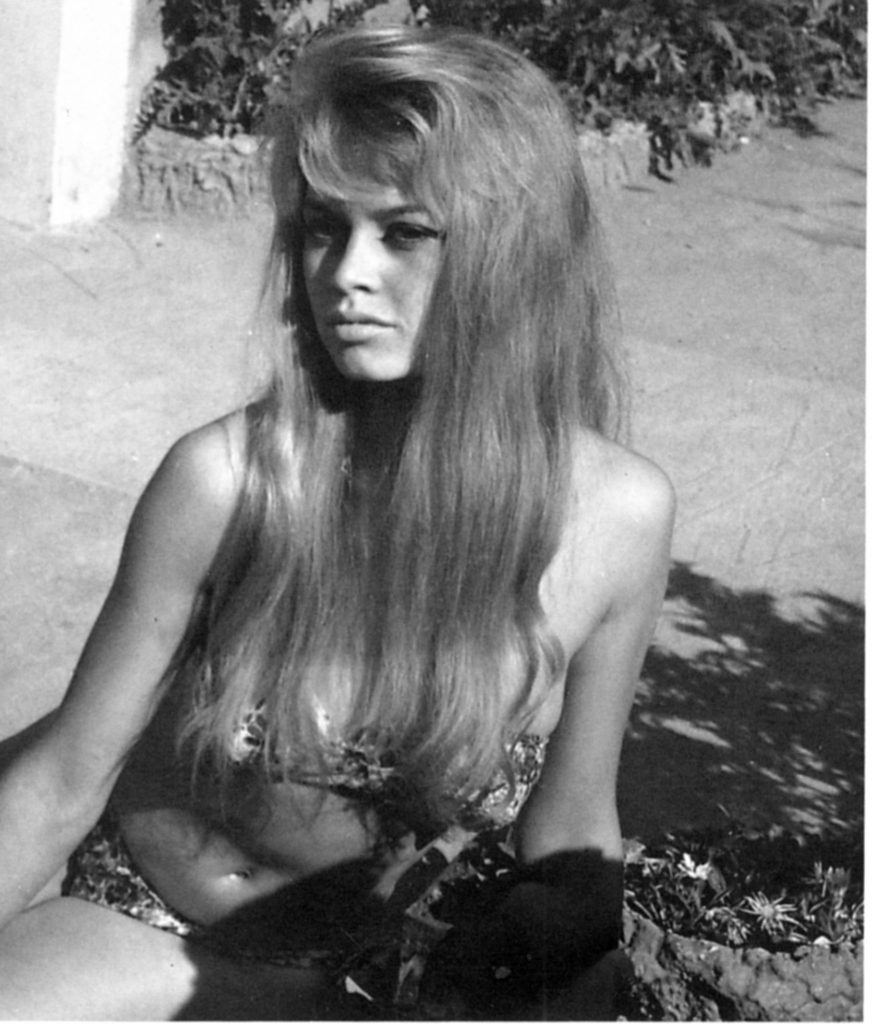 In the French romantic drama,  And God Created Woman, Brigitte Bardot made every woman run out and buy a bikini. 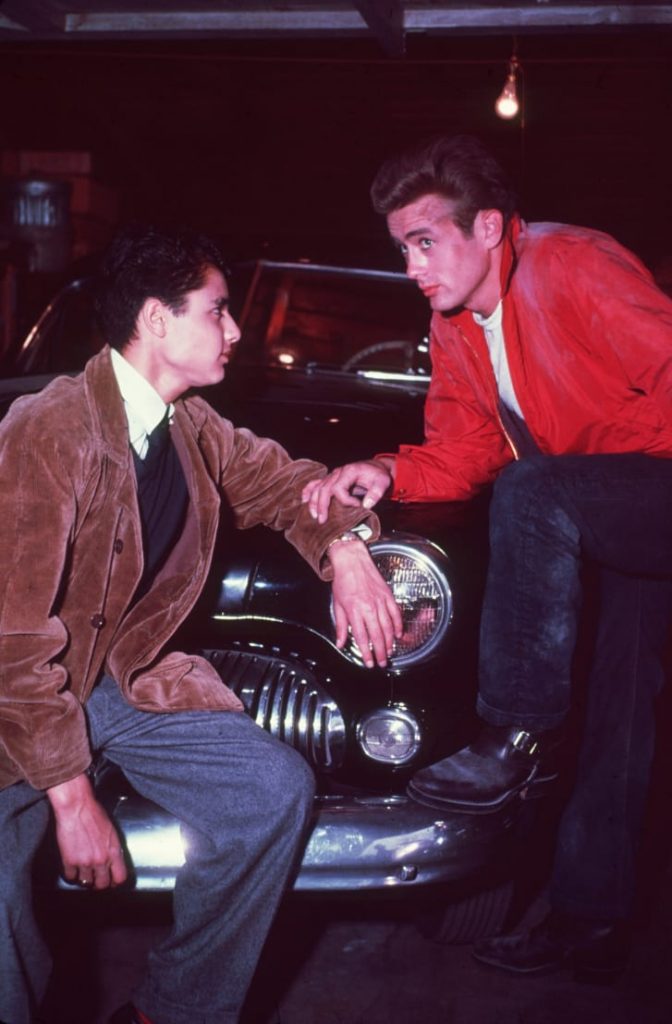 James Dean, with fellow actor Sal Mineo, in a scene from Rebel Without a Cause. (Photo Credit: Hulton Archive/Getty Images)

Thanks to James Dean’s character Jim Stark, in Rebel Without A Cause, it became oh-so-cool to become a high school rebel, as teens across the United States began to wear leather jackets over white t-shirts and jeans. Marilyn Monroe, one of the sexiest and most popular Hollywood platinum blonde starlets, made this white dress famous. In the film, The Seven Year Itch, Marilyn stands over a subway grate and as her dress billows up, she seductively tries to hold it down. The dress launched a thousand variations and became one of the most iconic images of Marilyn Monroe. 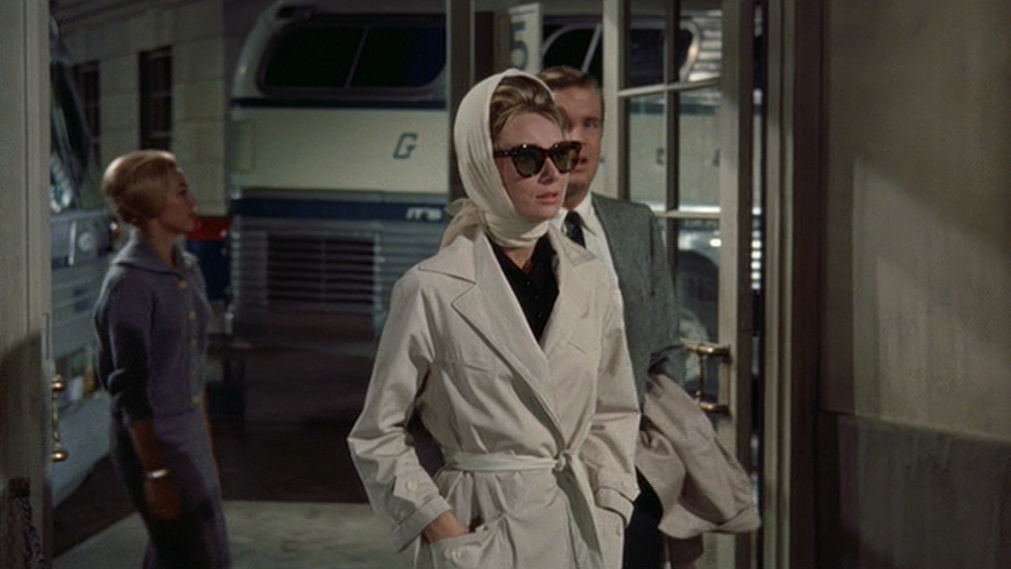 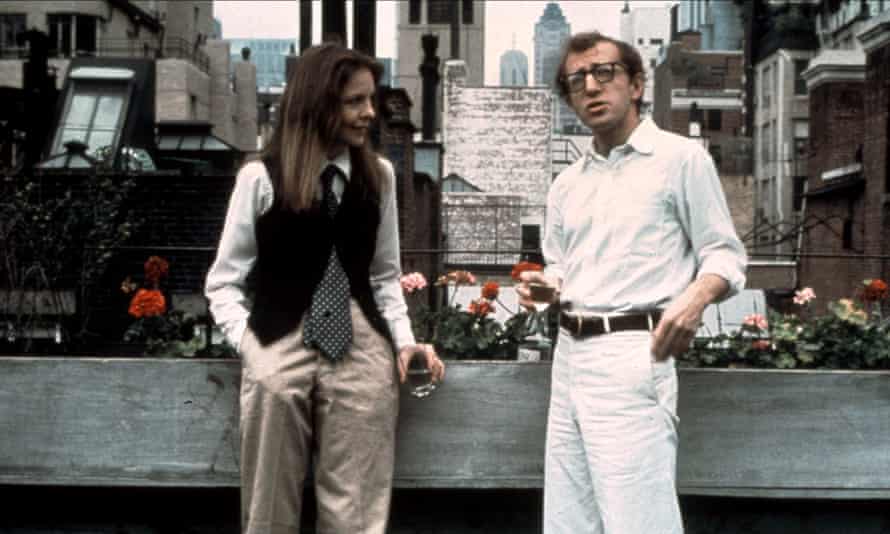 The sartorial choices in the film Annie Hall broke down the barriers between feminine and masculine dressing. Believe it or not, main character Diane Keaton wore all her own clothes for the iconic Woody Allen flick. Her wardrobe consisted largely of men’s clothing, such as slacks, suspenders, vests, ties and business shirts – a fashion phenomenon which is still being imitated today. 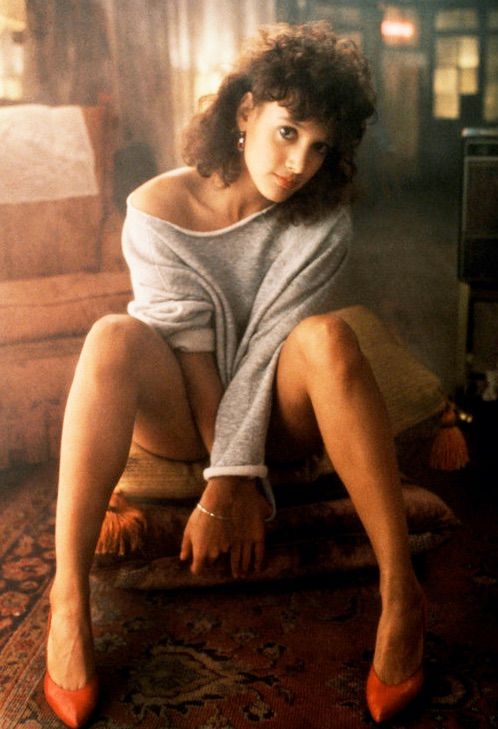 Jennifer Beals danced her way into everyone’s heart in Flashdance, resulting in every teenage girl reaching for their scissors to cut up their sweatshirts to achieve her look.

Molly Ringwald was the eighties teen queen whose effortless style, both on and off the screen, inspired a generation of American girls. As the character Andie Walsh in Pretty In Pink, her flair for changing thrift store clothes into cool fashion helped launch the DIY movement.

Cher (played by Alicia Silverstone) and Dionne (played by Stacey Dash) rocked schoolgirl looks in the film Clueless. They were so trendy then, and are still making headlines today. This nineties cult classic brought us crop tops layered over floaty shirts, flirty plaid skirts, and over-the-knee socks. All looks that trendy teens are still wearing today. 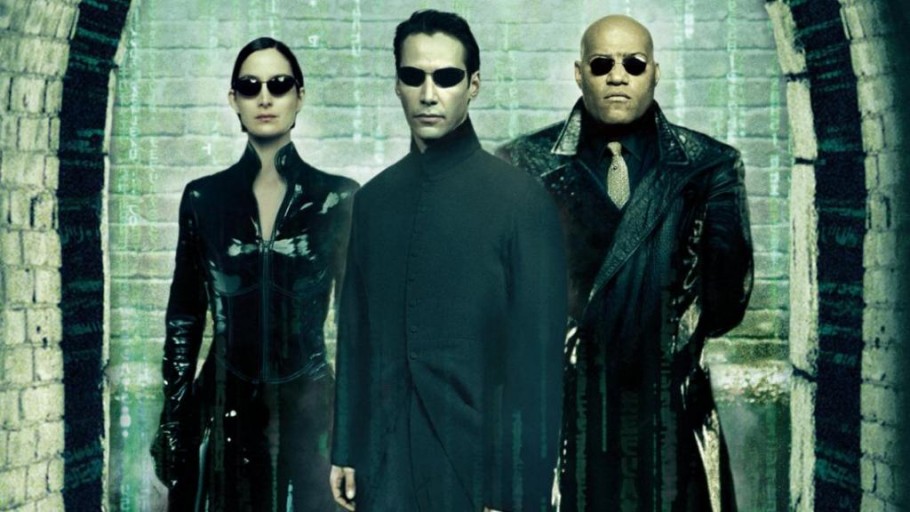 The sci-fi thriller The Matrix was a real trendsetter. Keaanu Reeves and Laurence Fishburne’s black nylon trench coats, tactical belts, and tiny sunglasses are still the inspiration behind many designer collections. 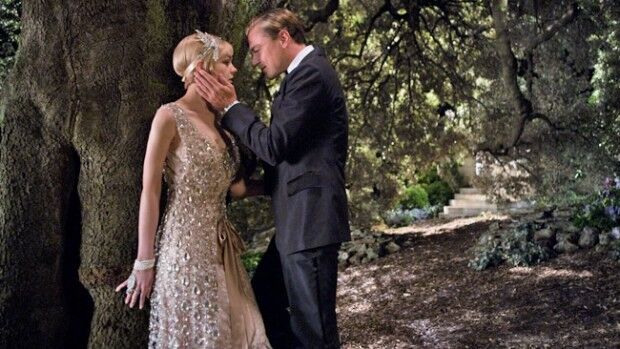 Director Baz Luhrmann brought the classic novel The Great Gatsby to life. Luhrmann enlisted Miuccia Prada to collaborate with costume designer Catherine Martin on a whopping 40 costumes. While Prada insisted “it was not about glamour for me”, her designs epitomize opulence. The 1920s fashion was decadent and whimsical and just like that, woman were opting for art deco-inspired dresses and men began wearing dapper suits again.

So tell us, do you know of other films that started a trend?