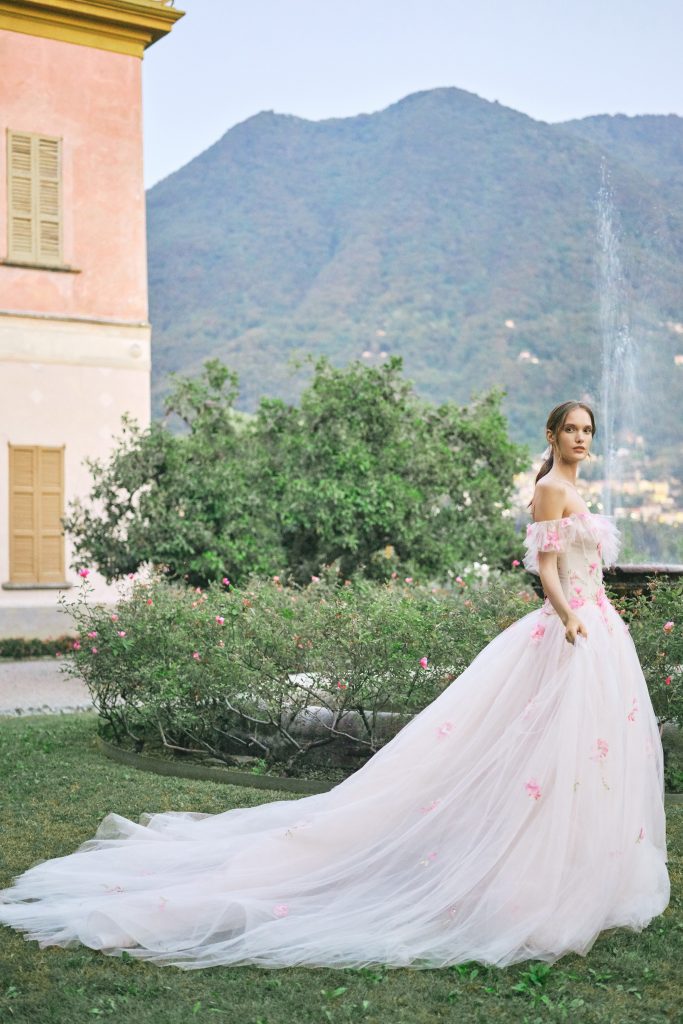 The whimsical Fall 2020Bridal season has come to an end. And while the runways were filled with gorgeous white gowns, here at University of Fashion, we decided to dig deeper and explore the history of the bridal dress and why ‘white’ would become the ‘go-to’ color for brides.

HISTORY OF THE WHITE WEDDING DRESS

Shocker! Brides did not always wear white. Throughout the 19th century white textiles were impossible to clean by hand, so only the very wealthy could afford such high-maintenance fabrics. Therefore, most women wore their best dress on their special day. 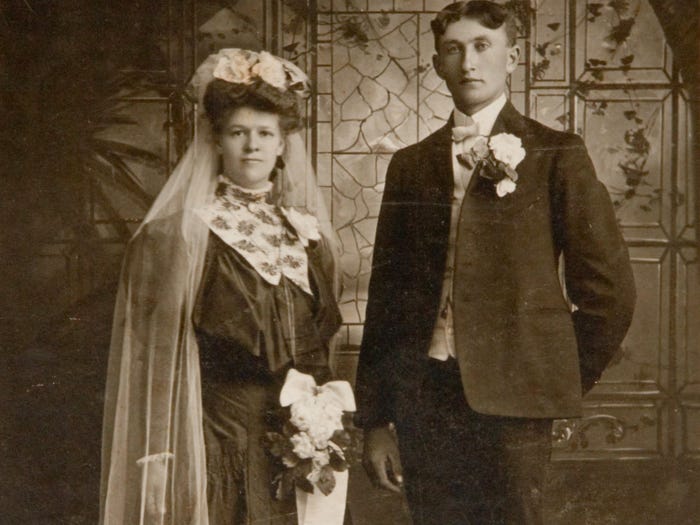 In many Asian countries, red is the color of choice for brides, as the vibrant hue is a symbol of  luck, sexuality and happiness. 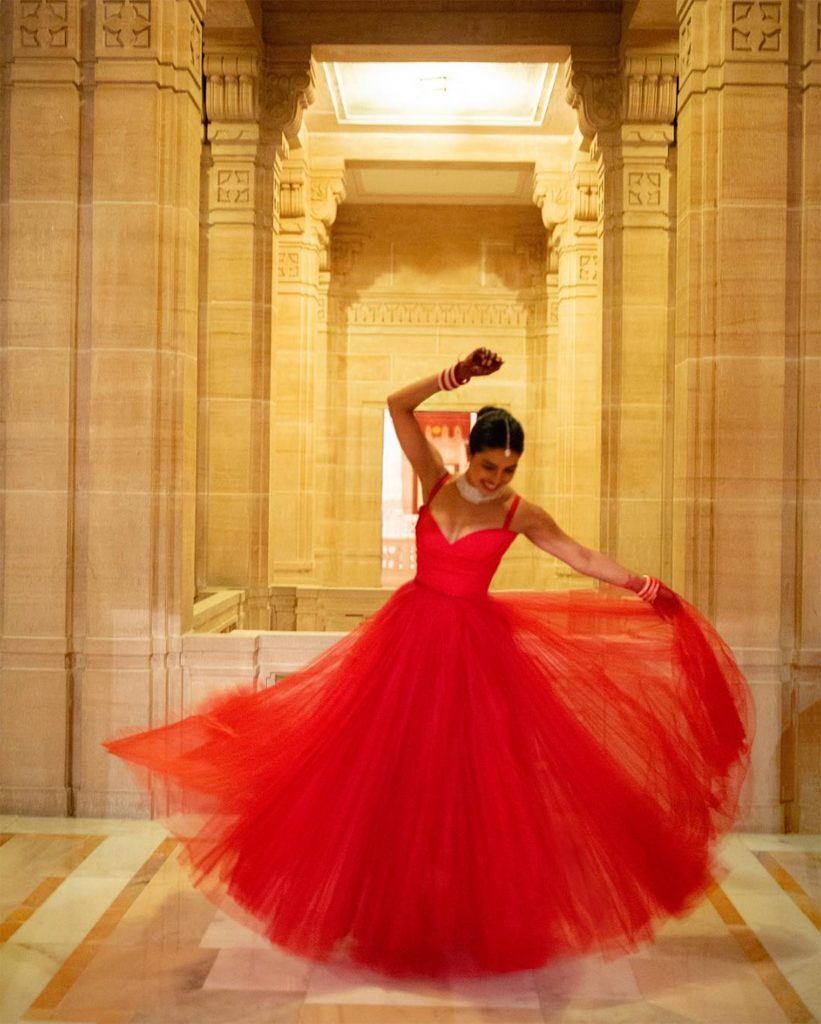 Queen Victoria was a trend-setter when she broke from the status quo with her 1840 wedding dress, by wearing a lace, ivory-colored silk satin gown. Fashion magazines embraced the look, calling ‘white the most fitting hue’ for a bride. The trend caught on and brides to this day have embraced the white gown. 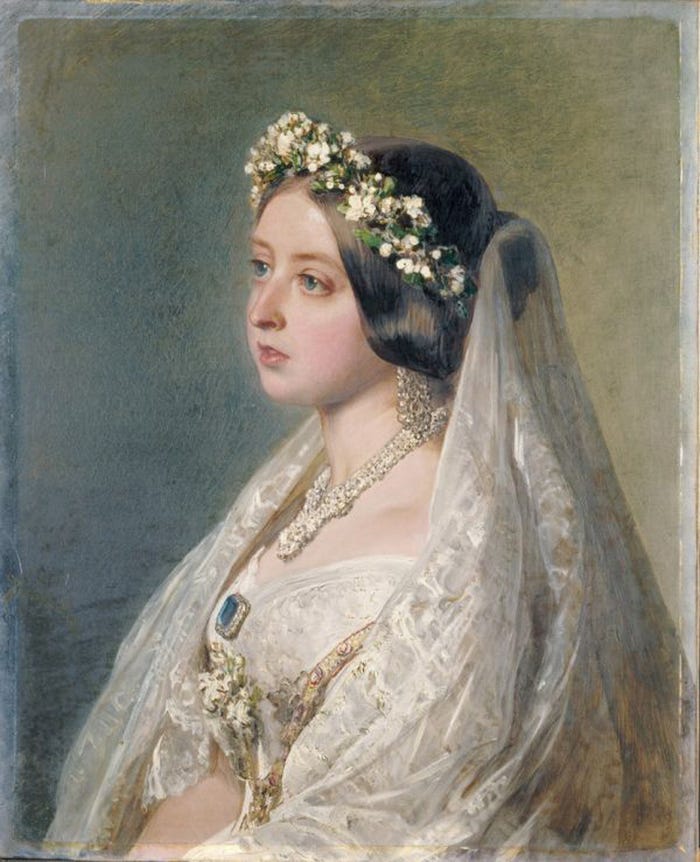 A painting of Queen Victoria in her wedding gown and veil, given to her husband Prince Albert in 1847 as an anniversary gift. (Photo courtesy of Wikimedia Commons; source Time)

Today, a wedding dress is usually only worn once and is often the most treasured and expensive garment a women will ever purchase. But for centuries women, including Queen Elizabeth, wore their wedding dress on multiple occasions — making alterations to fit with the times or a changing figure. 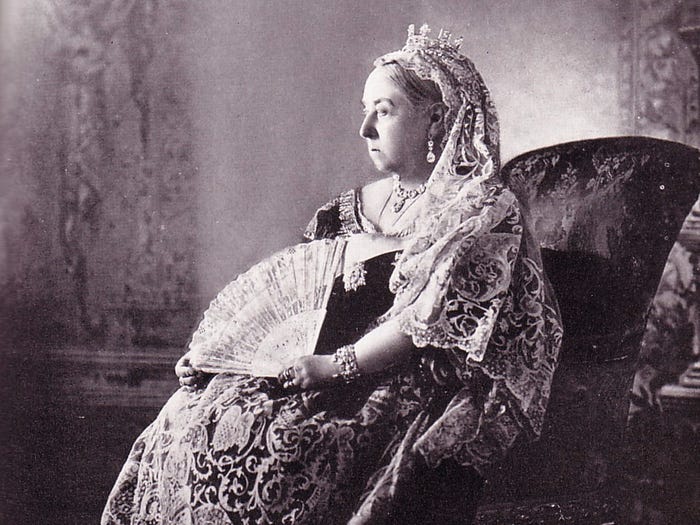 Queen Victoria re-purposed lace from her wedding gown in the dress she wore to her Diamond Jubilee. (Photo courtesy of Wikimedia Commons; source BBC)

In the Roaring Twenties, as hemlines became shorter, brides opted for wedding dresses that rose above the knee. 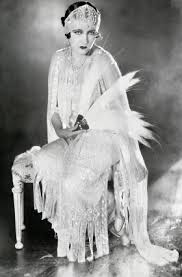 During World War II, many brides could not afford to purchase a new wedding dress; so they borrowed gowns or wore their service uniform on their special day. 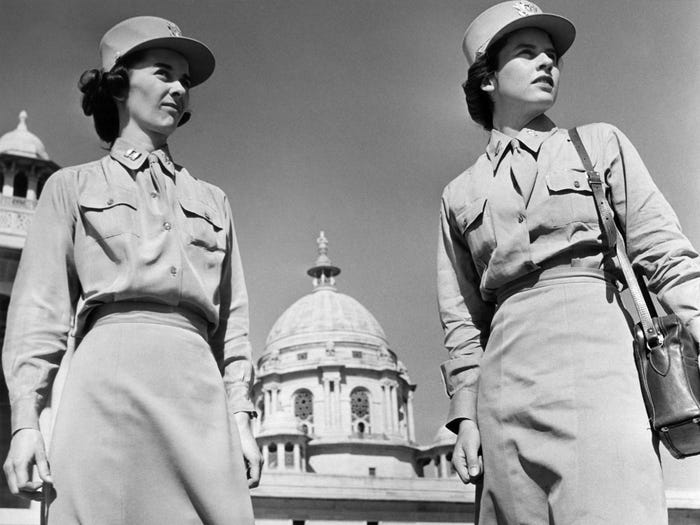 In 1944, it was common for women to get married in their service uniforms. (Photo courtesy of AP; source BBC)

Hollywood has always influenced fashion and when Audrey Hepburn wore a demure mid-calf length dress to her wedding in 1954, the dress length became the most popular style for several years. 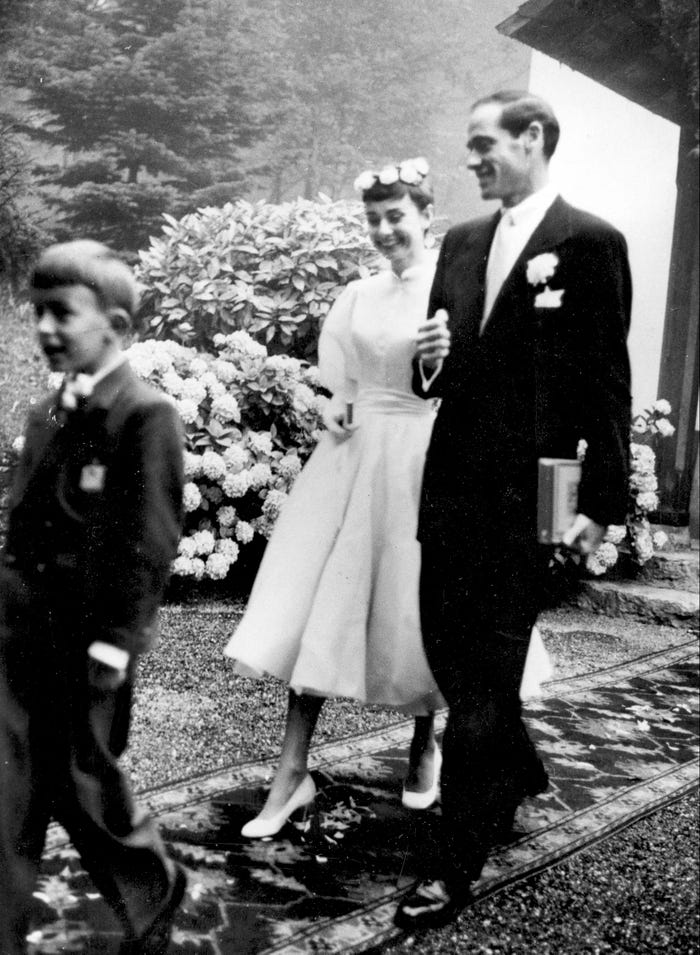 The sixties ushered in a new bridal style – mini dresses paired with knee-high boots. The style reflected the times and was worn by fashion icon Audrey Hepburn during her second marriage in 1969. 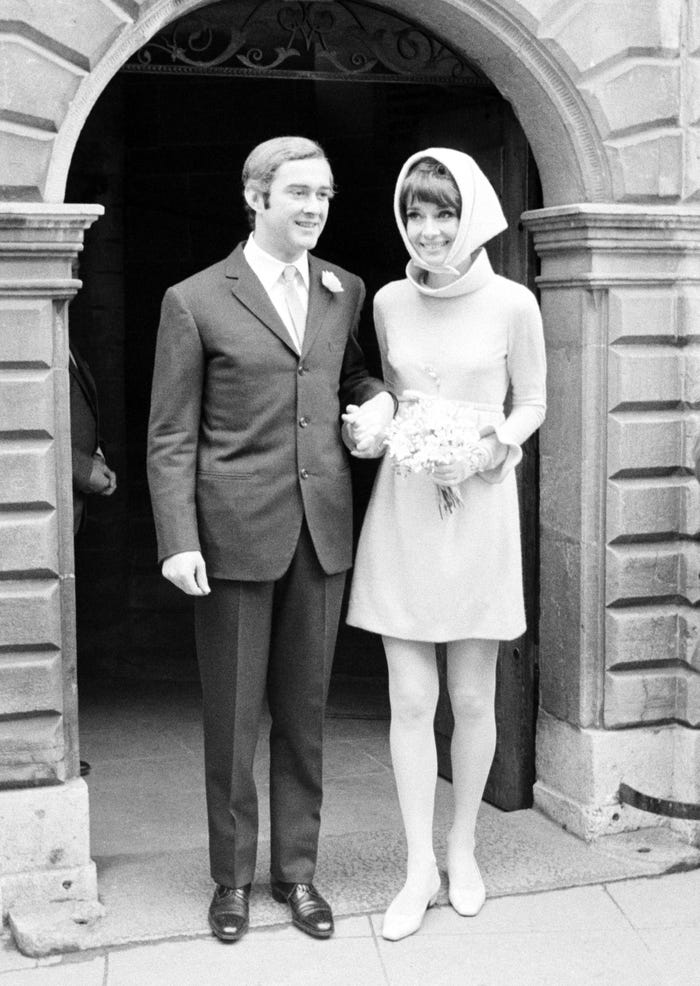 The bohemian bride became the trend of the Seventies, as brides wore loose, empire-waisted, velvet dresses with extravagant sleeves. 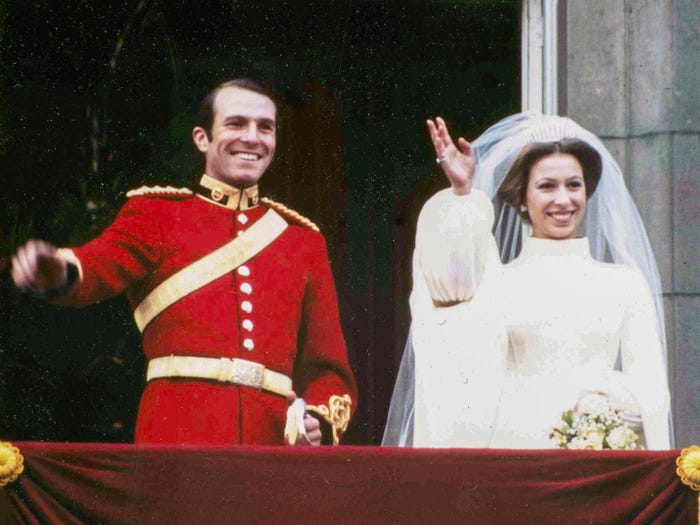 Princess Anne and her husband Captain Mark Phillips wave from the balcony of Buckingham Palace following their wedding ceremony in 1973. (Photo courtesy of AP; source BBC)

In 1981, Princess Diana married Prince Charles, and suddenly the princess gown became the most popular silhouette of the decade. Brides everywhere wore full skirts, poufy sleeves and a tiara on their head. 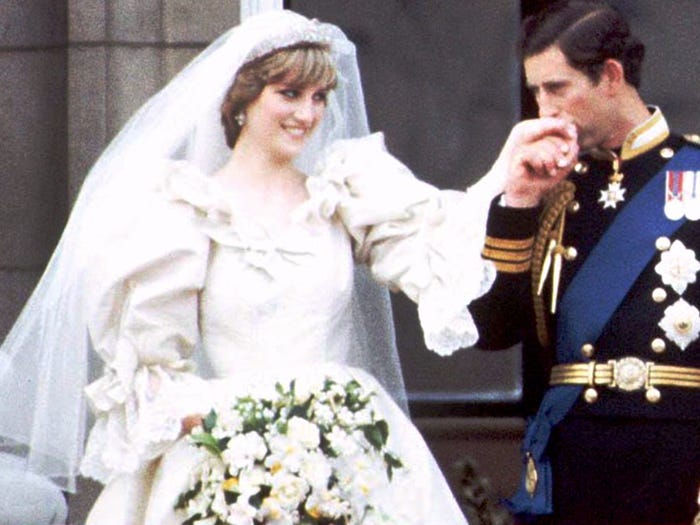 Prince Charles kisses the hand of his new bride, Princess Diana, on the balcony of Buckingham Palace in 1981. (Photo courtesy of AP)

After all the frou of the ’80s, the ’90s ushered in a clean, modern, minimalistic approach to bridal fashion. Brides opted for fitted sheath dresses that were chic and sophisticated. 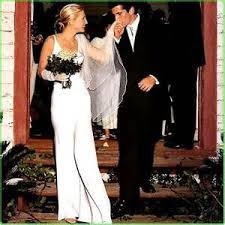 Throughout the 20th century the majority of brides wore white on their wedding day. But, by the start of the 21st century, bridal designers started shaking up the bridal market by offering brides a range of pretty pastel gowns, tough only 4 to 5% of dresses sold at David’s Bridal  in 2014 were colored. 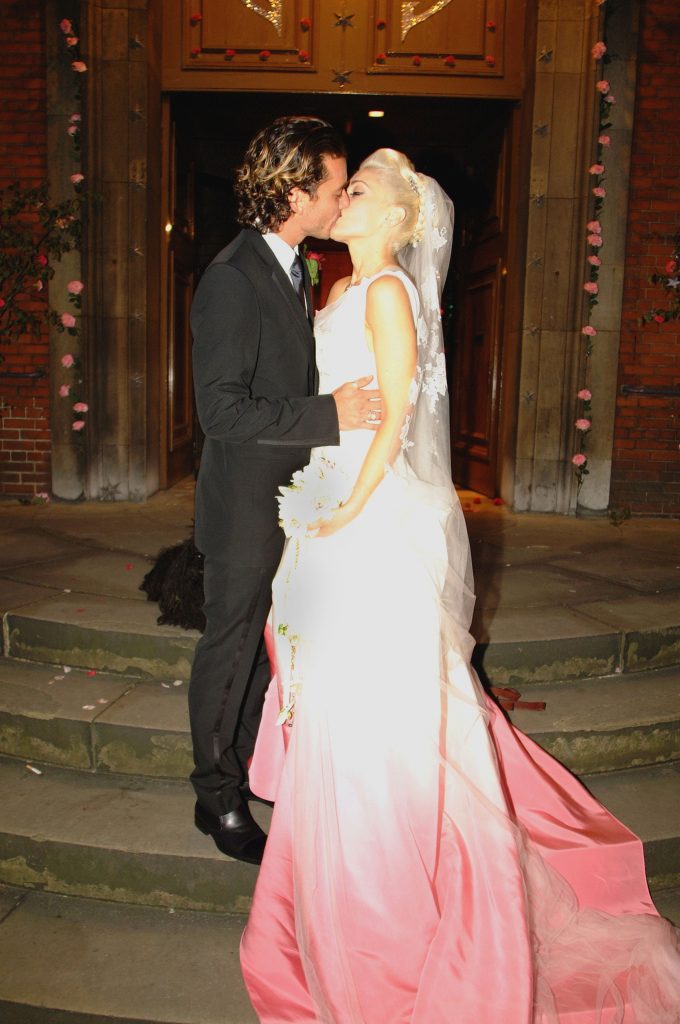 Gwen Stefani wore an ombre Galliano gown when she married Gavin Rossdale in 2002. (Courtesy of Observer)

While every decade has had a signature bridal style, today’s bridal designers are offering up a wide variety of options for every type of bride. Here are a few of our favorite looks from the Fall 2020 bridal show season. 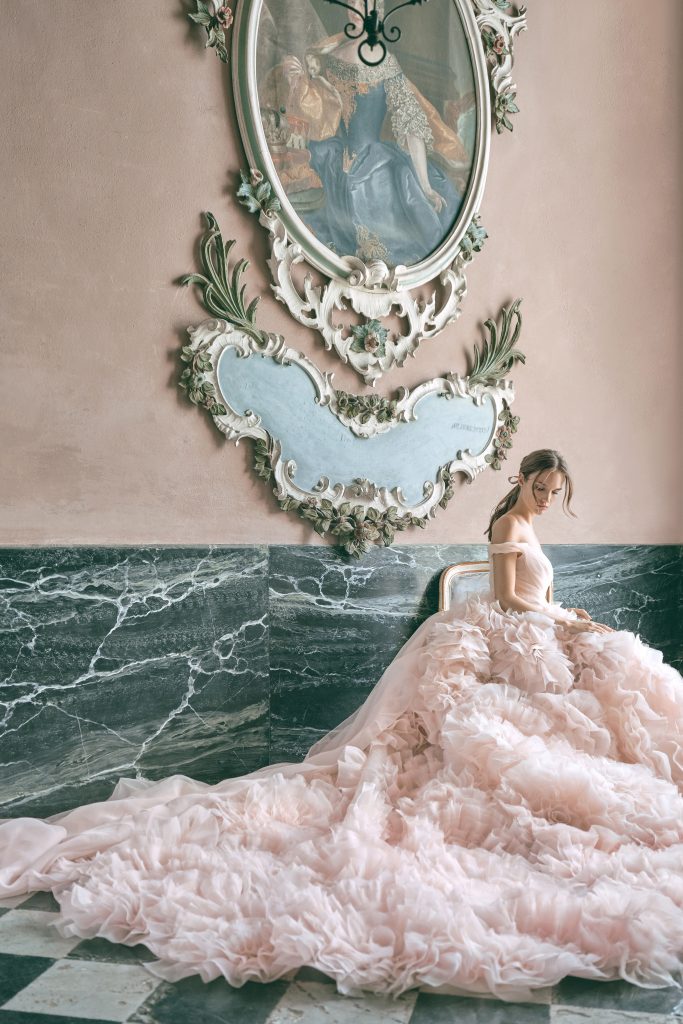 Pretty in pink in Monique Lhuillier. (Photo courtesy of designer) 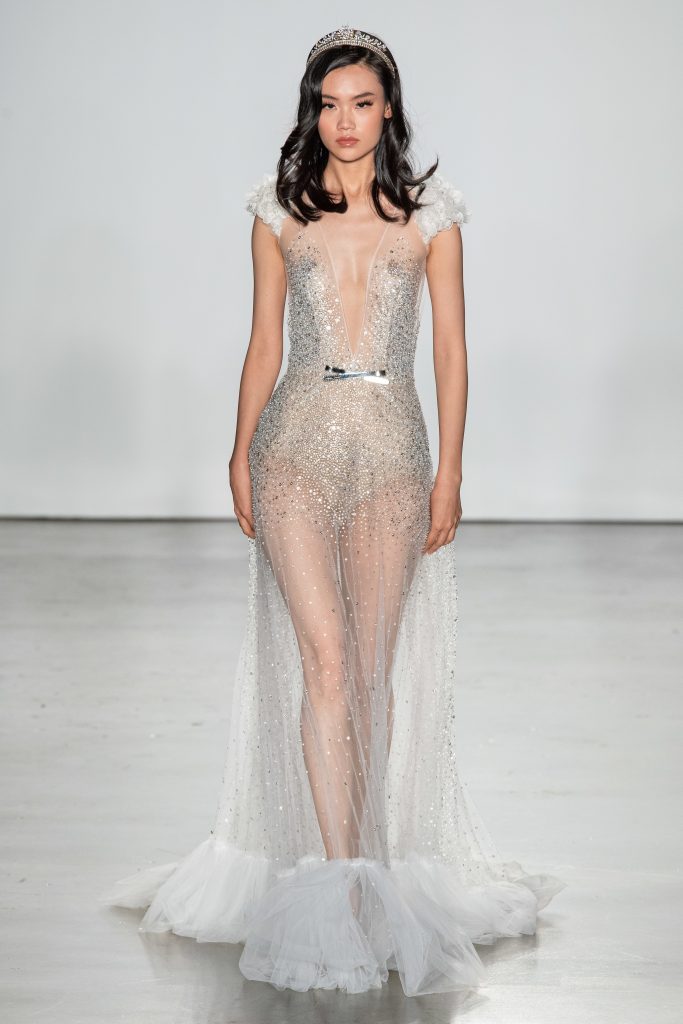 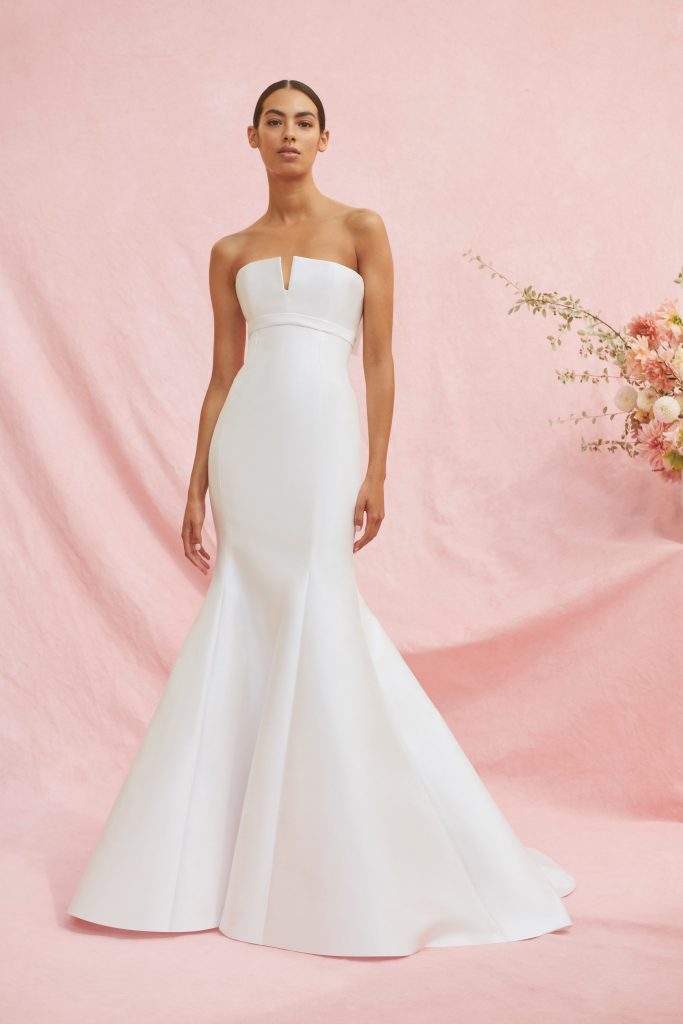 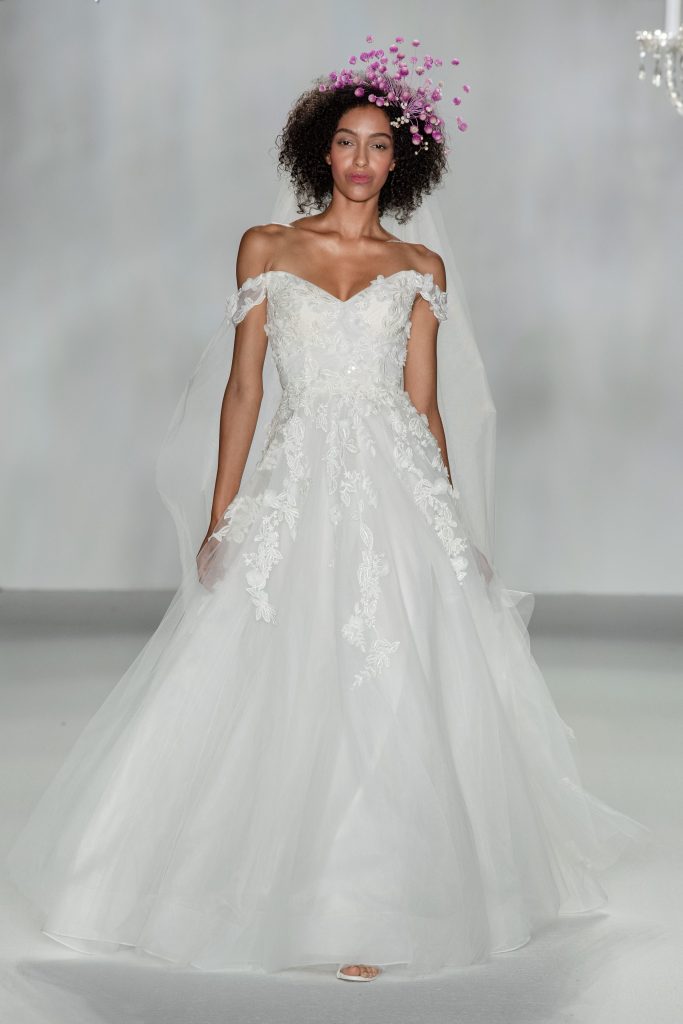 Theia’s creative director Don O’Neill took inclusion one step further by including a disabled model in his fall 2020 show. (Photo courtesy of designer)

We’d love to hear from YOU, what is your favorite bridal decade and why?