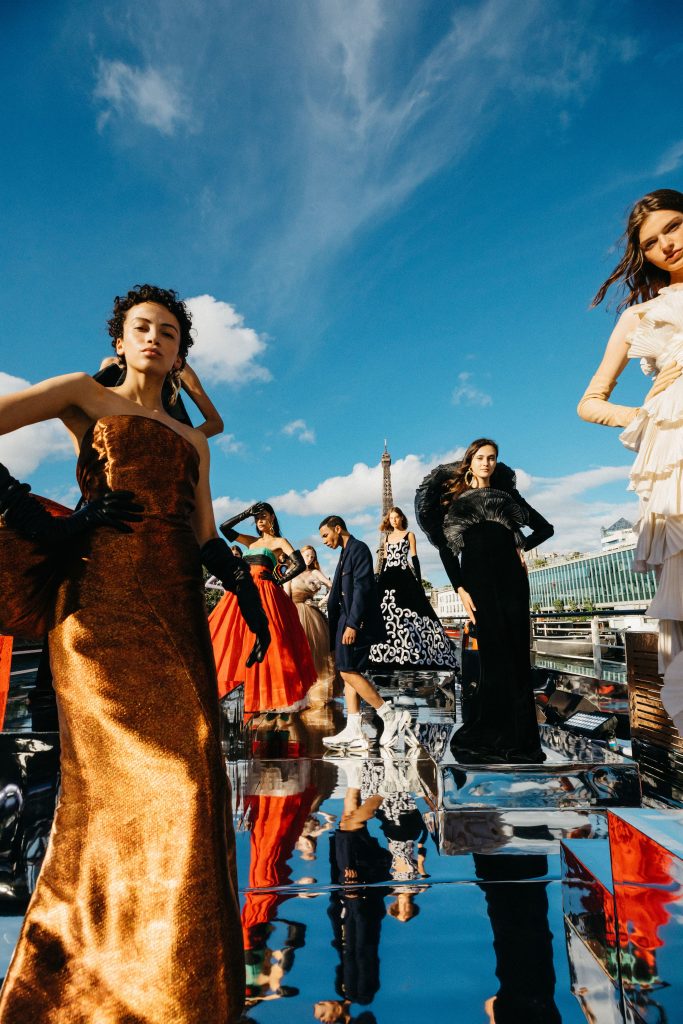 If you’re a faithful follower of the UoF blog, then you know what we’ve been asking for years… “are fashion shows still relevant”?

This question has long been debated among the fashion set as well. But the fashion industry, an industry whose DNA is ALL about CHANGE & TRENDS, has historically been reluctant to abandon live runway shows and try something new. It has literally taken a pandemic to get them off the dime!

Alas! For this Fall 2020 Haute Couture season, the industry has given the digital runway world a whirl. However, reviews of digital shows for this couture season have been mixed. Many fear that if digital IS the future of fashion, then the economies of Paris, Milan, London and New York’s will greatly suffer. Why? Because fashion week in each of these cities brings many other financial benefits. Buyers, clients and the press, book flights, hotels and restaurants. Lots of lost revenue. Let’s not forget the taxi drivers, Uber drivers, D.J.’s, lighting technicians, show venues, models, and the list goes on and on. More lost revenue.

By going digital, the industry also misses out on the social aspect of attending shows. Fashion week is a great way for fashion editors, buyers, publicists, designers and influencers to network and celebrate fashion. However exhausting attending back to back shows for an entire month may be, watching a digital show at home, or in your office behind a computer screen, or hunched over on your phone, is just not the same. Although there were plenty creative films dedicated this Fall’s couture collections, for many, nothing beats a live show.

Paris Couture Fashion Week was kicked off with a video address by model/celeb Naomi Campbell, who dedicated the season to the “fight for equality and diversity.” Campbell quoted Nelson Mandela and the Black Lives Matter movement. “This is a call for action we are making,” she said, wearing sleeveless T-shirt bearing the words PHENOMENALLY BLACK. “It is up to us, it is up to you to start enforcing inclusion of the multitude of identities that compose our countries,” she said. “The time has come to build a more equitable industry with a good form of checks and balances. It is now more than ever compulsory to include them in a permanent way, and not a transient one,” she added.

The supermodel urged “regular and sustainable conversations with minorities from each country and culture in this mega industry.”

“I am Naomi Campbell and I declare Paris couture fashion week ouvert. merci.” 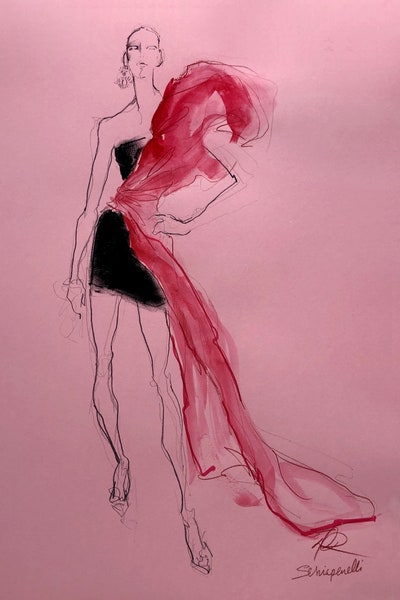 American designer, Daniel Roseberry, the creative director for Schiaparelli, has been quarantined in New York City since the NY coronavirus lockdown, and therefore did not have a collection to present for the Fall 2020 couture season. However, what he did do, was present a short film featuring himself sketching on a bench in NYC’s Washington Square Park. The film was dubbed an “Imaginary Collection.” Roseberry stated, “Life today is lived according to opposites; the pandemic has inverted everything we knew. Now, instead of a team to execute this collection, I just have my own imagination. Instead of the Place Vendôme in Paris, it’s been designed and sketched on a park bench.”  Who  out there doesn’t love seeing how a designer conceptualizes a collection?

Roseberry’s drawings featured nods to founder Elsa Schiaparelli that included a shocking pink column dress, a jacket with leg-of-mutton sleeves and a “chandelier” top. The house hopes to show a capsule collection of these designs in Los Angeles in December. “Everything has changed, but imagination, and the drive to create, has never been more relevant, or more profound. This collection is a tribute to that impulse to create,” said Roseberry in a WWD article. “Someday very soon, I will venture back to Paris and hand these styles off to the atelier. We will make a portion of these and take them around the world to share with our valued clients and stylists.”
Here’s his video. 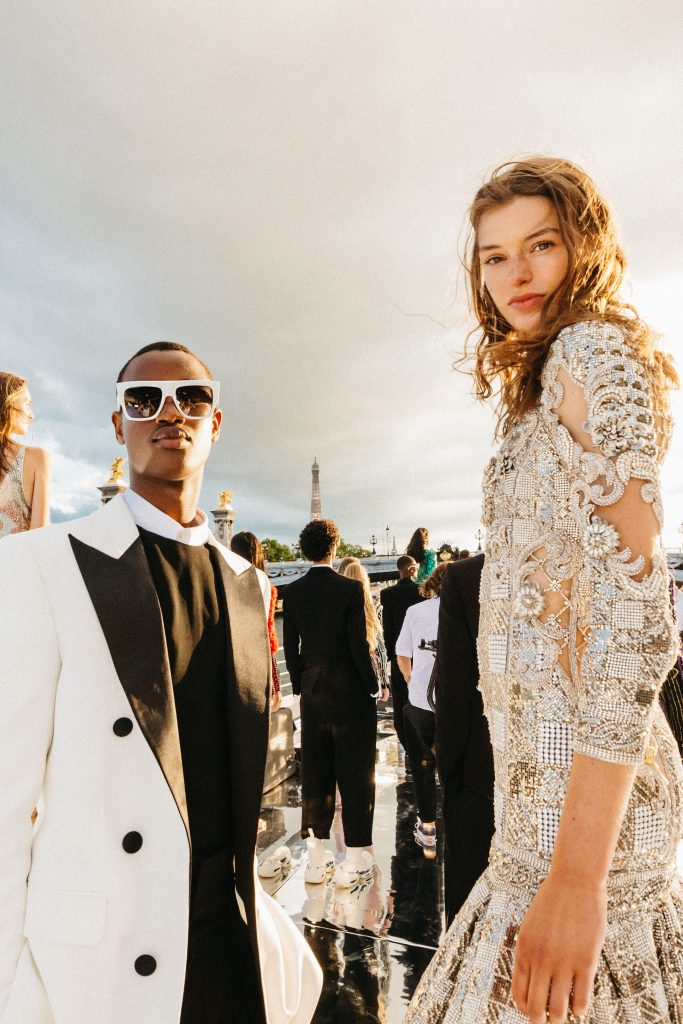 Olivier Rousteing, the social media genius and creative director for Balmain, planned a two-hour extravaganza that was live-streamed on TikTok. This marked the first time TikTok has ever worked with a luxury brand. Rousteing used the hashtag #BalmainSurSeine making Paris’ Seine River his stage.

The Balmain crew traveled on a barge from the Eiffel Tower eastward and featured French pop singer Yseult and 50 dancers. A very social media-worthy idea! However, not without technical difficulties. The sound dropped and minutes after embarking the live feed cut out, never to return but by that time Balmain had already racked up about 15,000 new followers on his social media platforms. That’s a win!

“What happened on Sunday was beyond the digital Fashion Week,” Rousteing said to Vogue, estimating that approximately 20,000 locals caught at least some part of the spectacle.

“After 75 years, Balmain is showing a new direction. We gave people access to our house, and we showed that we are really French. It was our gift to Paris, the City of Light,” said Rousteing. The show was re-streamed on the Federation de la Haute Couture’s online platform. According to Rousteing, “It’s really hard to just do digital without any physical experience; we are all missing it. We work for an audience and you lose the emotion if you don’t have one. We need to go back to that.”

Everyone always looks to Iris van Herpen as the future of fashion, so it was no surprise that she created a fantasmagorial short film entitled “Transmotion.” The film was directed by Ryan McDaniels and starred Games Of Throne’s actress Carice van Houten, wandering through a modern courtyard surrounded by mesmerizing pulsating lights. Throughout the video were shots of black crystals that magically assembled on the floor and then morphed into the same lattice pattern that appeared on her dress. The film featured only one dress, but was a signature Iris Van Herpen creation that perfectly blends high-tech artistry with old-world techniques. 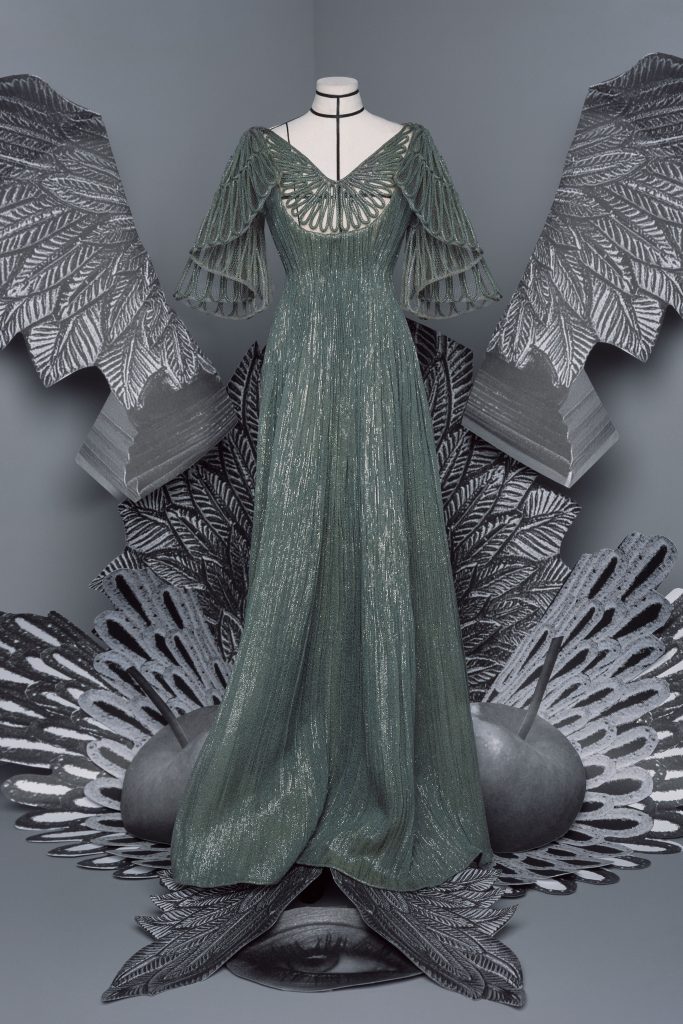 Maria Grazia Chiuri, artistic director of women’s haute couture, ready-to-wear and accessory collections at Dior, recruited Italian director Matteo Garrone to produce a short film showcasing the intricate looks of her Fall 2020 haute couture collection. The movie, entitled, “The Dior Myth,” was based on mythology and drew viewers into a magical woodland journey filled with fairytale creatures like sirens, nymphs, a faun and a woman emerging from a giant shell. It was dreamy and fantastical, which is what one expects from couture. However, Dior’s film caught plenty of criticism for its lack of diversity. 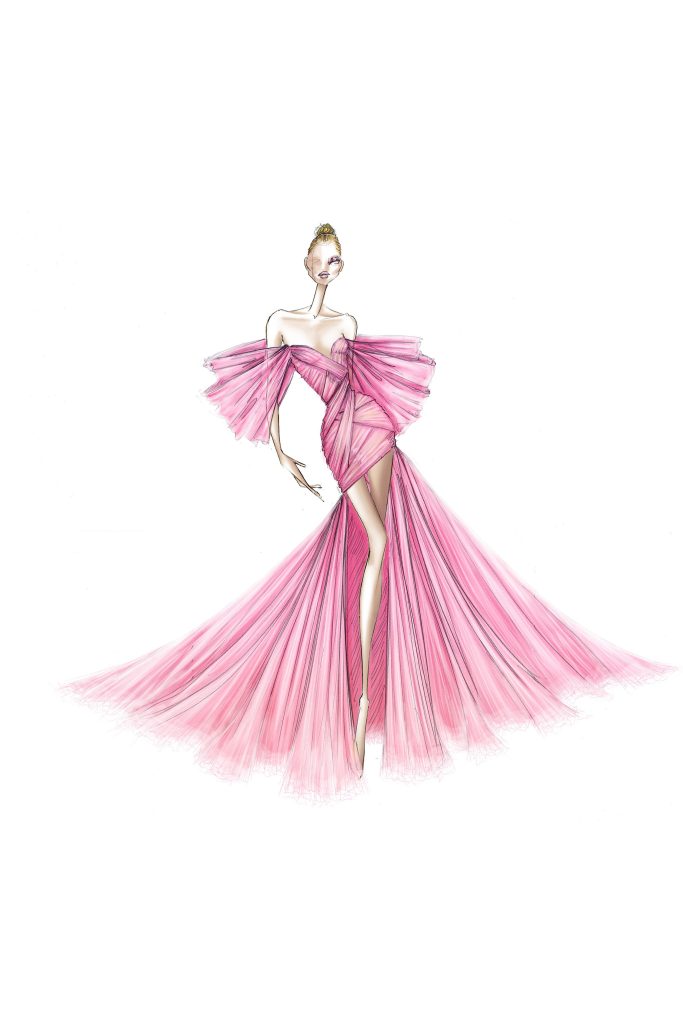 Sure travel feels like a distant memory right about now as some of us are still quarantining and can only take domestic flights, but in the digital world, anything’s possible. Tamara Ralph, the artistic director behind the Ralph & Russo label, created a whimsical collection worn by an avatar model. Ralph’s backdrop of choice? The Seven Wonders of the World, which added a playful twist to the intricate collection. 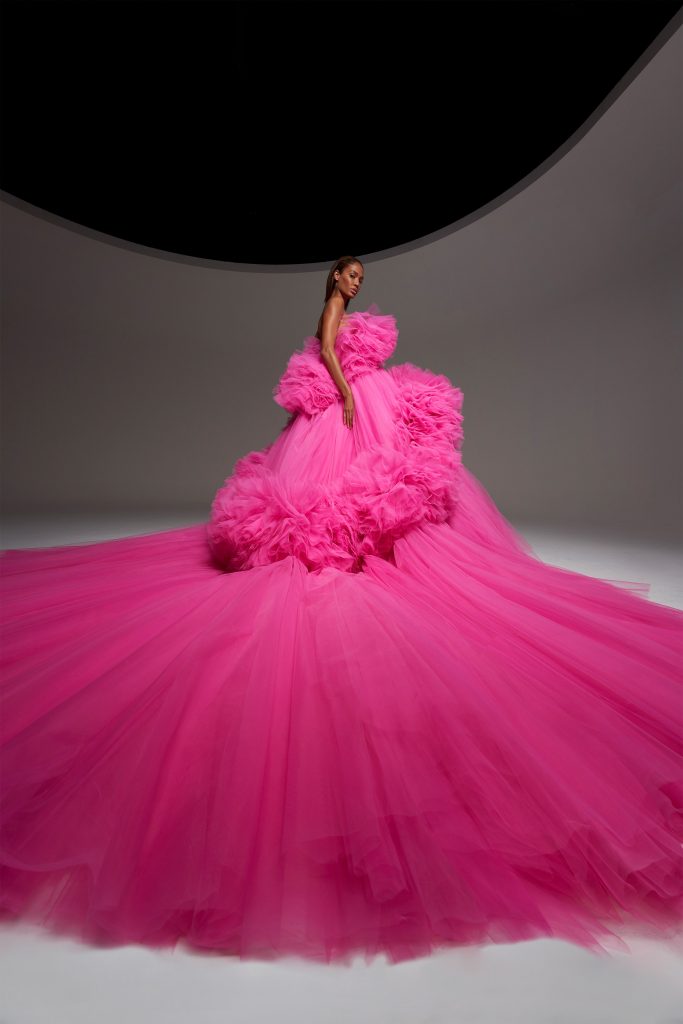 Many designers have been showing restrain this season as the crippling affects of the economy due to COVID-19 have many in panic mode, but this can’t be said about Giambattista Valli. The designer created his frothy, voluminous gowns that were unapologetically grand. He even featured a few face coverings, a nod to the pandemic, but they were purely decorative and not for protection.

Unlike other designers who collaborated with famous film directors and photographers to create their digital show, Valli  personally filmed extreme closeups of his creations with  his iPhone, yes, his iPhone!  He chose as his muse Puerto Rican supermodel and actress, Joan Smalls. “I’m taking by the hand all the viewers around the world who are still confined and can’t travel, and showing them Paris through my eyes,” he explained to Vogue. 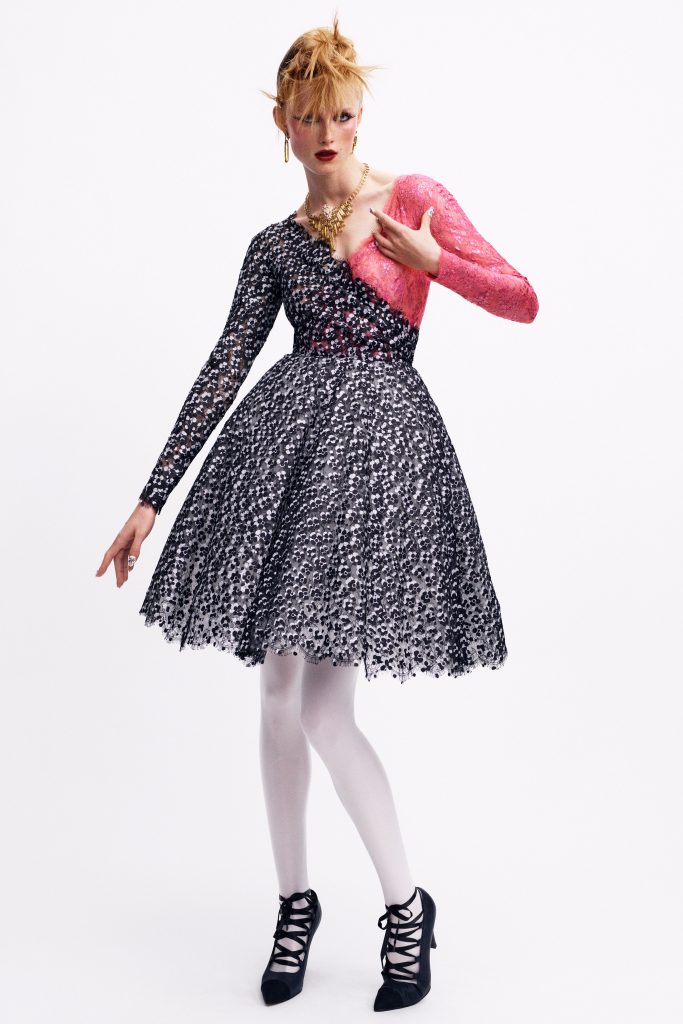 The eighties are back! At least in the world of Chanel’s creative director Virginie Viard, who presented a line-up that was so unapologetically maximalist. There were party dresses galore and plenty of bling. “It’s an eccentric girl with a touch of the Eighties. I wanted something joyful,” the designer said in an interview with WWD. Viard worked with photographer Mikael Jansson to create a show video: a one-minute, 22-second burst of images spliced with grainy black and white footage of models Rianne Van Rompaey and Adut Akech. 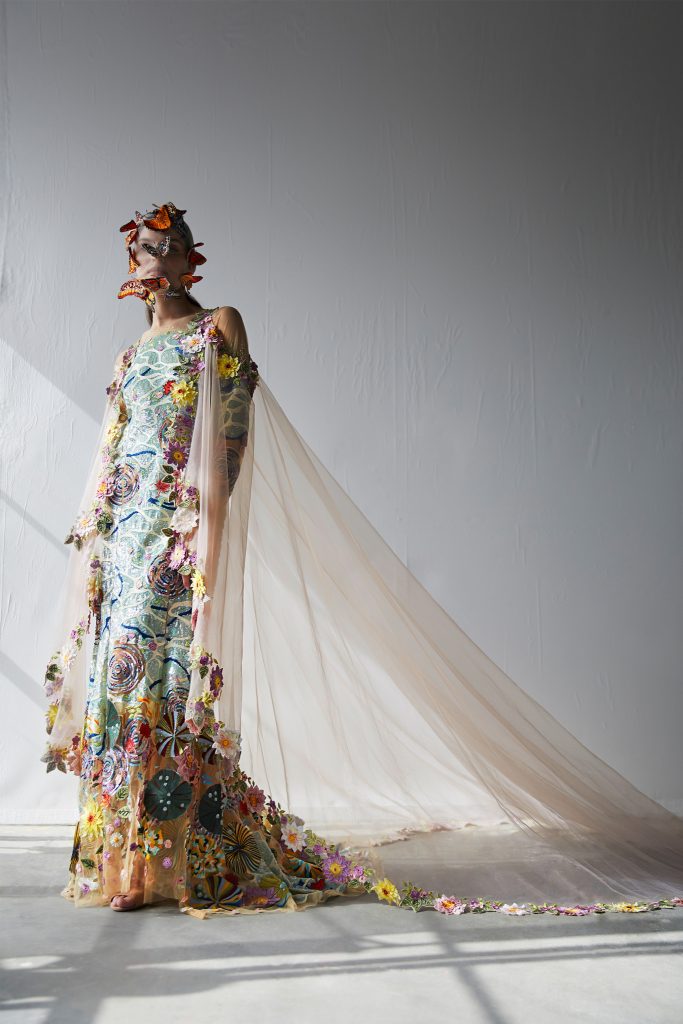 “Every stitch, every knot is strongly related to the present and future of an artisan, especially hit by the pandemic,” said Rahul Mishra in an interview with WWD. The designer is more determined than ever to support the embroiderers of India who created his elaborate designs. “Butterfly People” was the title of the collection, as it is meant to evoke nature flourishing without human intervention. 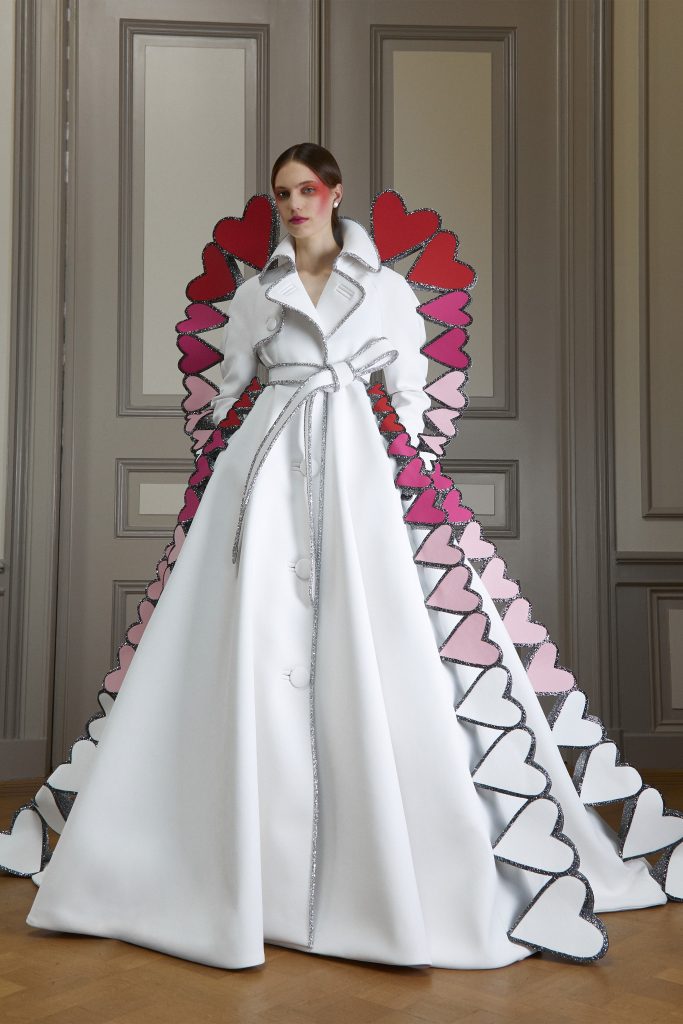 ‘Couture in the time of coronavirus’ was the reality behind Viktor Horsting and Rolf Snoeren’s namesake couture collection. The duo cleverly created three mini wardrobes comprised of a negligee, dressing gown, and coat, meant to represent pandemic-related emotional states.

They started the video with the fear and anxiety, emotions that we are all feeling as a society, but then the show quickly evolved into visuals representing feelings of love and joy. In the video, singer Mika plays a retro newscaster offering deadpan commentary on Viktor & Rolf’s collection. His description of a spiky coat was part of the gloom-and-doom segment. “There’s a lot to feel angry about and this garment will communicate exactly that,” he intones.

The collection consisted of nine intricate creations that ranged from a storm cloud slip dress to the ‘halo of hearts’ confection pictured above. All with Viktor & Rolf’s famous tongue-in-cheek humor.

At UoF, we think the most creative of all fashion video productions is this one by Dior, showcasing their new dress collection on 37 half scale dress forms each handmade by their expert couturiers and petits mains. Once the preferred design method used by famed French designer Madeleine Vionnet, working half scale is a great way to try out your designs sustainably. Dior plans to take orders by sending these clothed mini dress forms to their clients around the world.

Be sure to check out UoF’s social media channels and website to view our upcoming half scale draping and pattern making series. So very inspiring!

What are YOUR thoughts about digital shows vs runway shows?