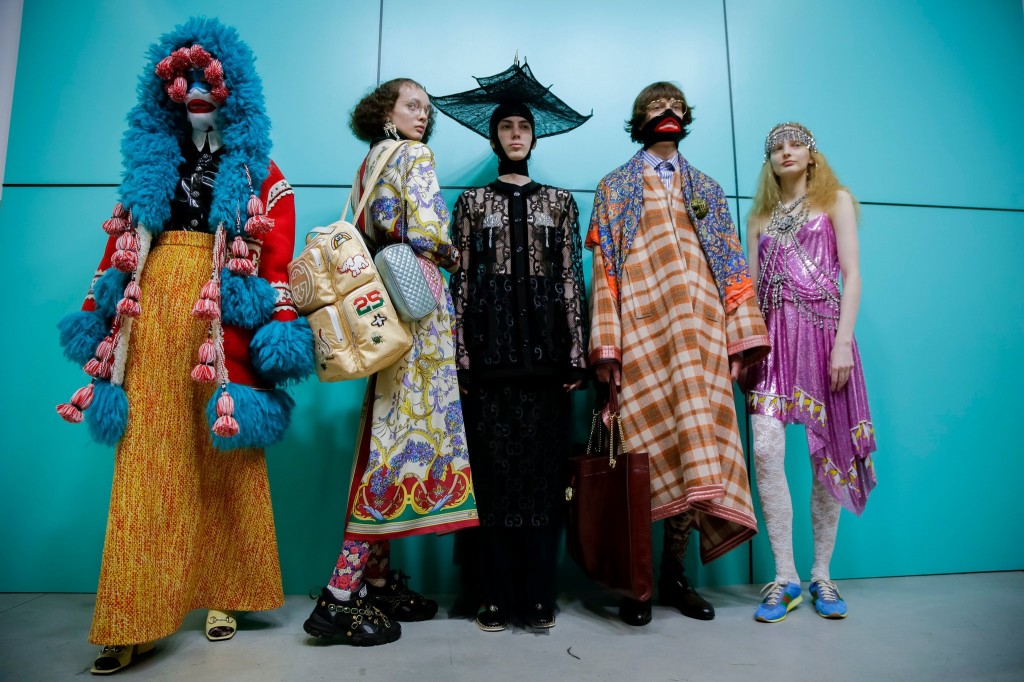 Tasked with reviewing both London and Milan fashion weeks, I suffered a slight panic attack before settling in to write this week.

Gender bending, logo presenting, fake head carrying, pattern mixing and matching, balaclava wearing, houndstooth-plaid-sequin donning—all descriptors that don’t even begin to cover the Gucci show in Milan. As a fashion student, I would have savored every detail of the Gucci extravaganza and devoured every look, head-to-toe.

But a lot has changed since I was fashion student, and the rate at which all-over-the-map details came down the Gucci runway got me thinking.

Have we become so inundated with stimulus in the form of Snapchat, Instagram and Twitter that if we’re not scrolling at top speed through a collection of a thousand talking points, it will fail to hold our attention? Has the frequency of impossible-to-fathom news reports somehow made us overlook anything that’s not over the top?

And then, in response to one of those impossible-to-fathom news reports, I read that Gucci has not only put on an over-the-top show, but is also donating $500,000 to the March for Our Lives gun control rally.

Mind officially blown. In a good, but whew-fashion-isn’t-just-about-creating-a-great-dress-anymore type way.

You’ll have to forgive me if I leave out overarching trend reports from London and Milan this season. To maintain my sanity, I’ve decided to select just a few of my favorite looks from London, then Milan, and take the time to dissect and appreciate them, just like the “olden days” as a wide-eyed fashion student.

So come along with me on this little escape from Overwhelmington, and let’s enjoy some really good fashion together.

Ever have the urge to dive into a silk scarf display, make a “scarf angel” and document the draped results? Oh, it’s just me?

Well, my urge has been satisfied thanks to the first winner of Her Majesty’s British Design Award, Richard Quinn. A graduate of Central Saint Martins, Quinn has only shown for two seasons, but can now claim the Queen as a front row guest.

Consider the following look a tease. To get a full appreciation of Quinn’s affinity for traditional English scarves and florals, look here. And take your time with each look—there’s lots to see in terms of draping, tailoring and proportion. 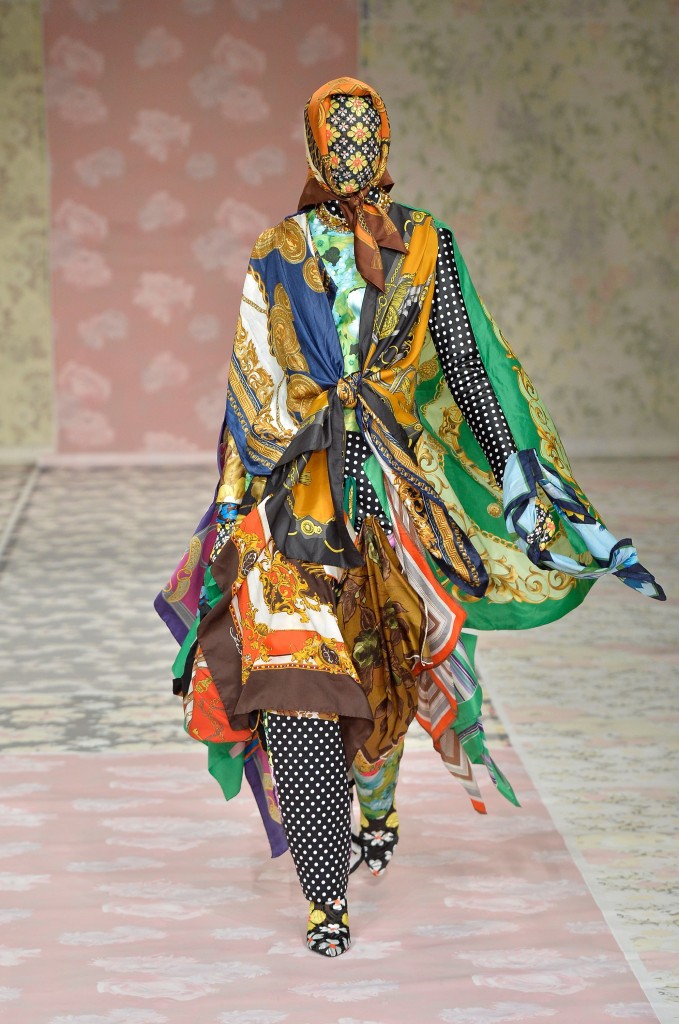 Christopher Bailey showed his final collection for Burberry in London this season. And what a fond farewell it was.

For all that Bailey has done to turn around the Burberry brand over the last 17 years, his final collection felt like a full circle homage dating back to his days as a 15-year-old gay teen and coming around to his bittersweet departure from Burberry as the consummate professional designer and CEO.

A rainbow motif was woven into the famous Burberry plaid and a large donation made to youth charities that support LGBTQ+ rights and mental health in honor of causes near and dear to Bailey’s heart. I was beside myself playing a version of Where’s Waldo (or Find the LGBTQ Pride Flag) in each look. Take a look at the overt and then more subtle examples below. 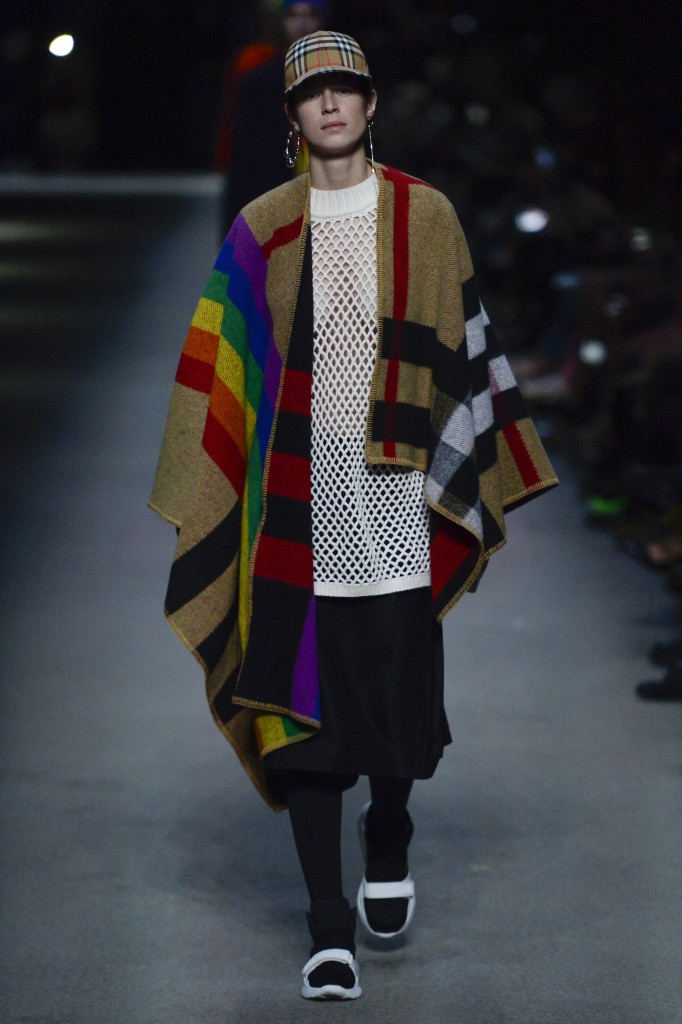 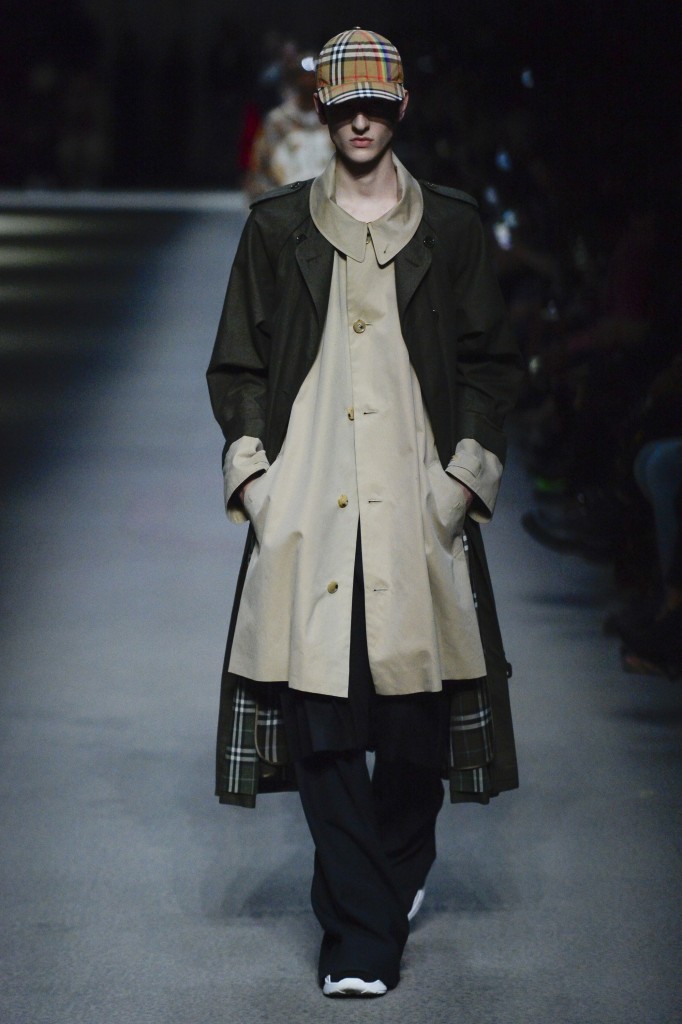 Student or no student myself, I love pouring over student collections, with Central Saint Martins always at the top of the list.

Maybe it’s because I know the blood, sweat, tears and hours that went into creating my own collection as a student, but you can almost see the late nights, the excitement and the passion in the following looks. Unfortunately, the individual students in the Central Saint Martins show were not credited in Vogue.com’s coverage (which I think is a crime), but if any CSM graduates are reading, congratulations—you blew my socks off.

Just look at the range of inspiration and innovation in the sampling below. It’s worth your time to scroll through all 177 looks here.

From engineered geometric hems to… 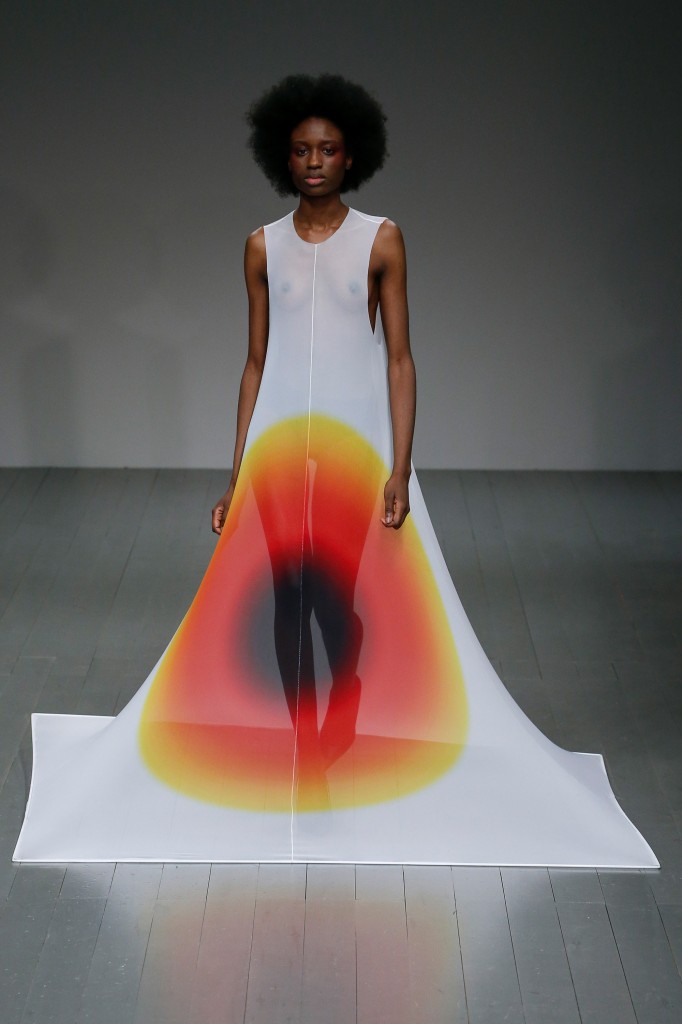 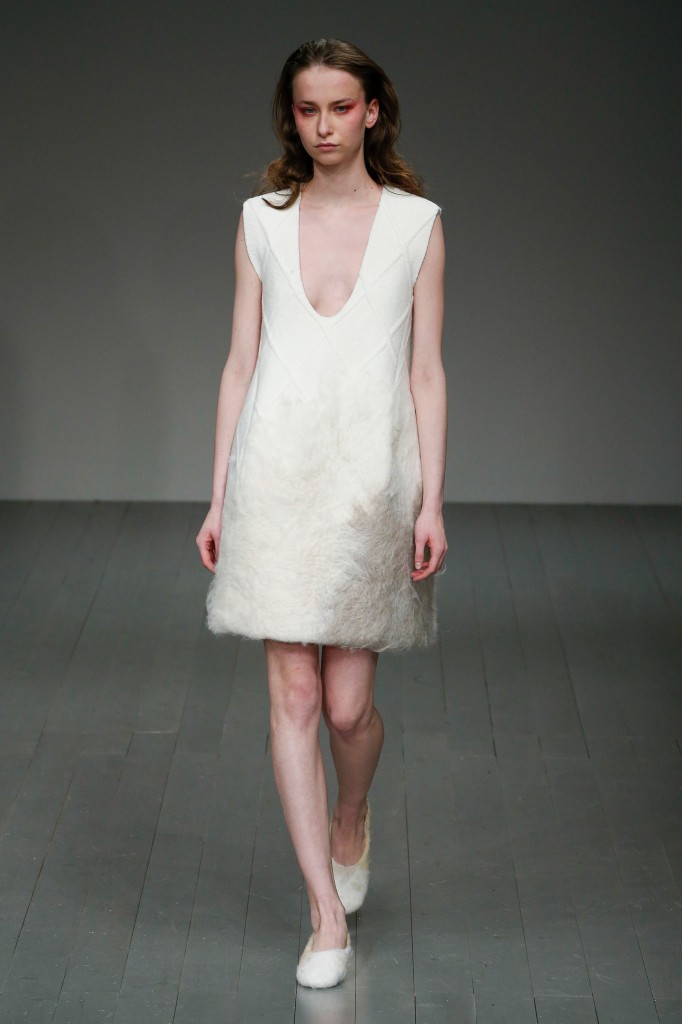 Exaggerated hard-edged shoulders perfect for a modern day Studio 54 to…. 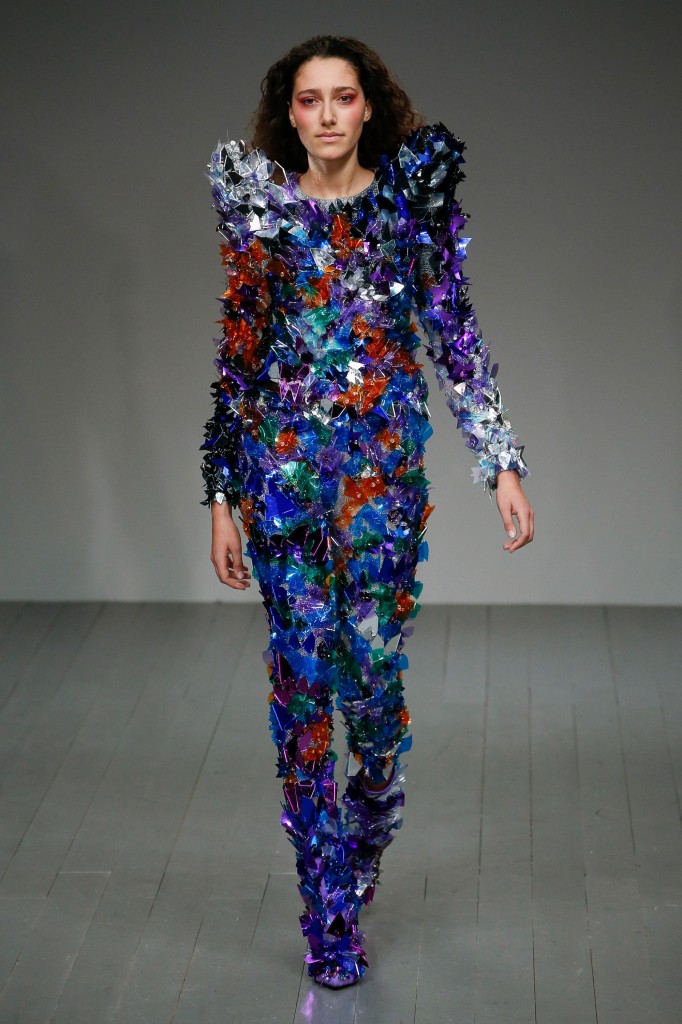 Well, I’m not sure what avant garde goodness is going on here… 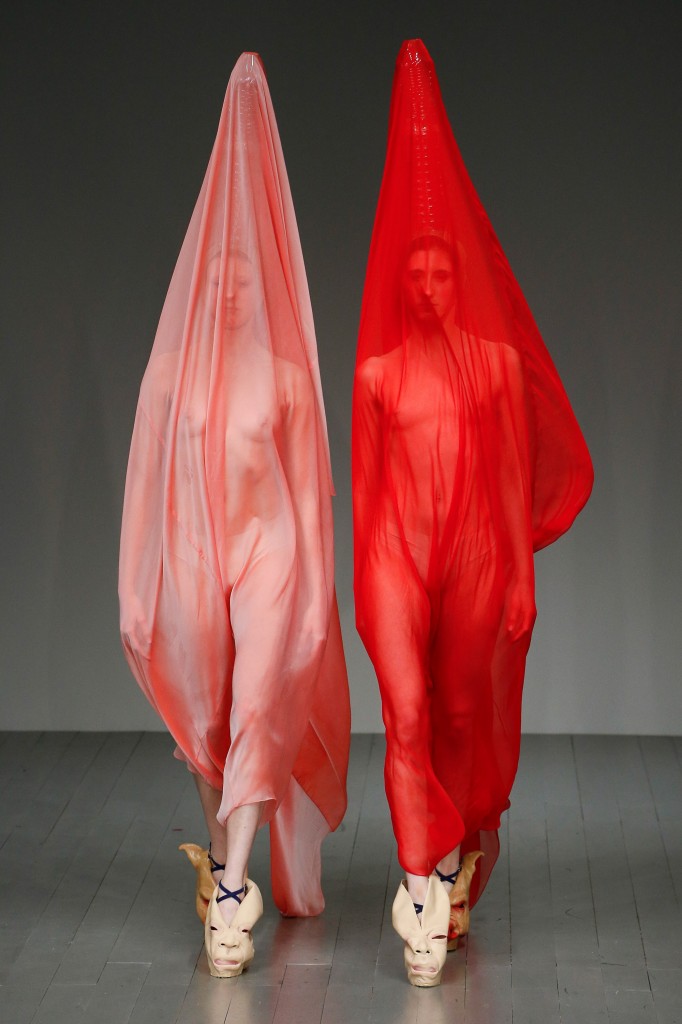 Students in London gave us their ALL.

Despite the gagillion elements that made up Gucci’s most recent offering, there was a feeling of cohesion due to the repeated themes of “hmmm…,” dark and creepy paired with well-known global cultural references.

Read more on Gucci’s cyborg inspiration here, but I couldn’t help but see my own version of the over stimulated culture we are living in in these looks.

This notion of a model carrying a replica of her own head felt reminiscent of the personas we create via social media. Let’s be honest—who hasn’t posed themselves over and over just to get the right “impromptu” selfie? 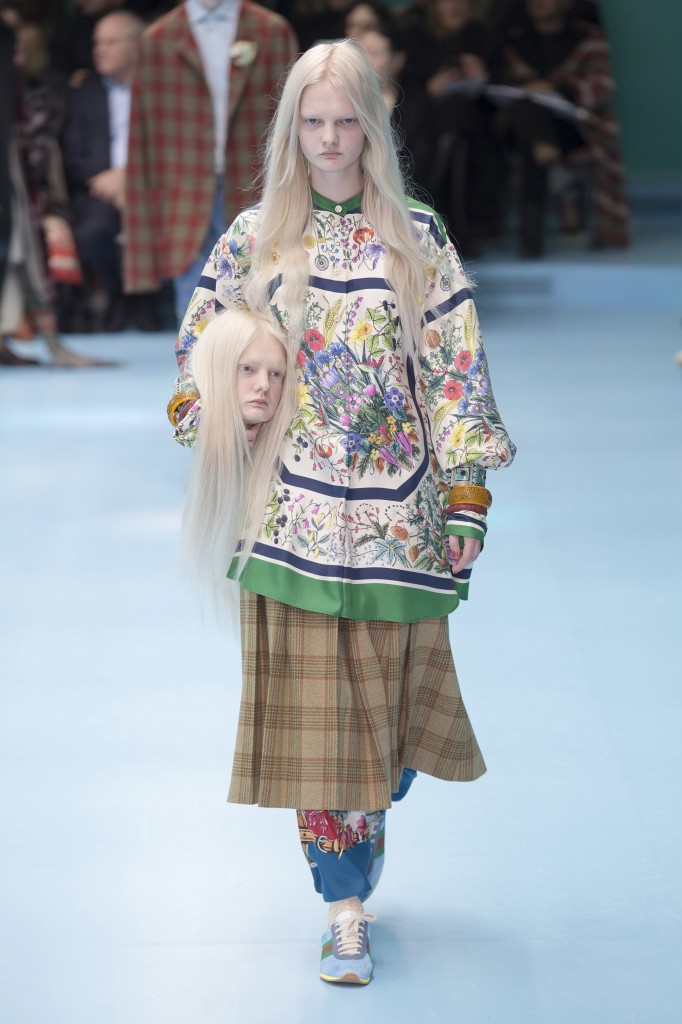 While I actually really love this look and could see myself wearing this coat in a heartbeat, our culture has become one of labels and logos designating which “side” we have chosen. And this may be stretching it, but at least in the US, groups of people continue to become more and more polarized often despite living next door to each other, much like the two halves of this incredible coat. 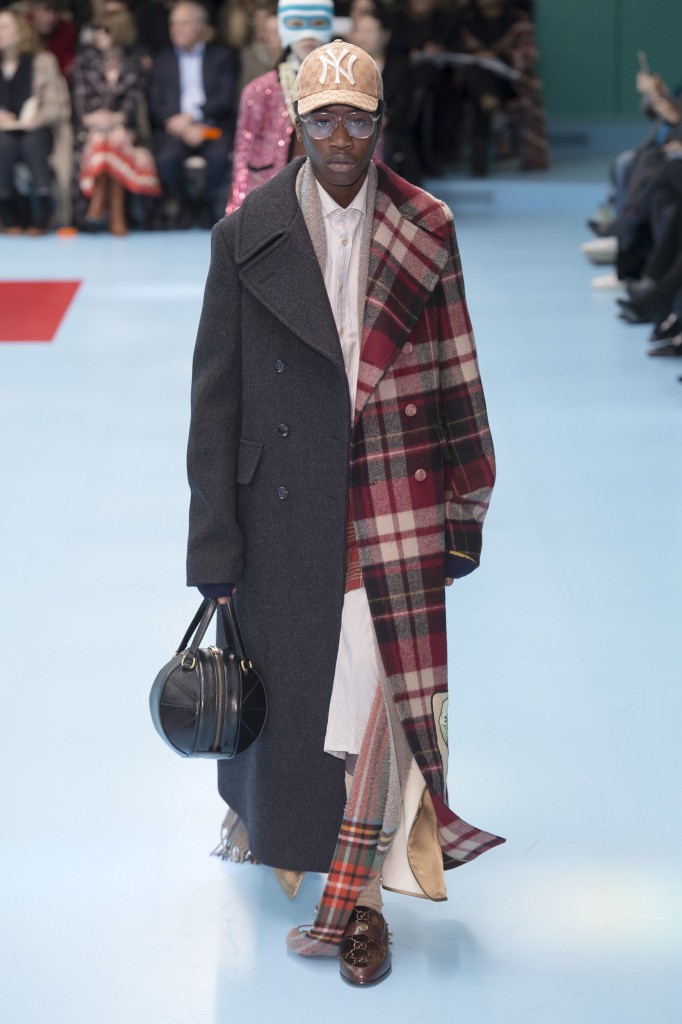 The sheer Gucci “garment bags” that covered several looks made me think, “Oh, no need for an Instagram filter, Gucci has already provided one.” 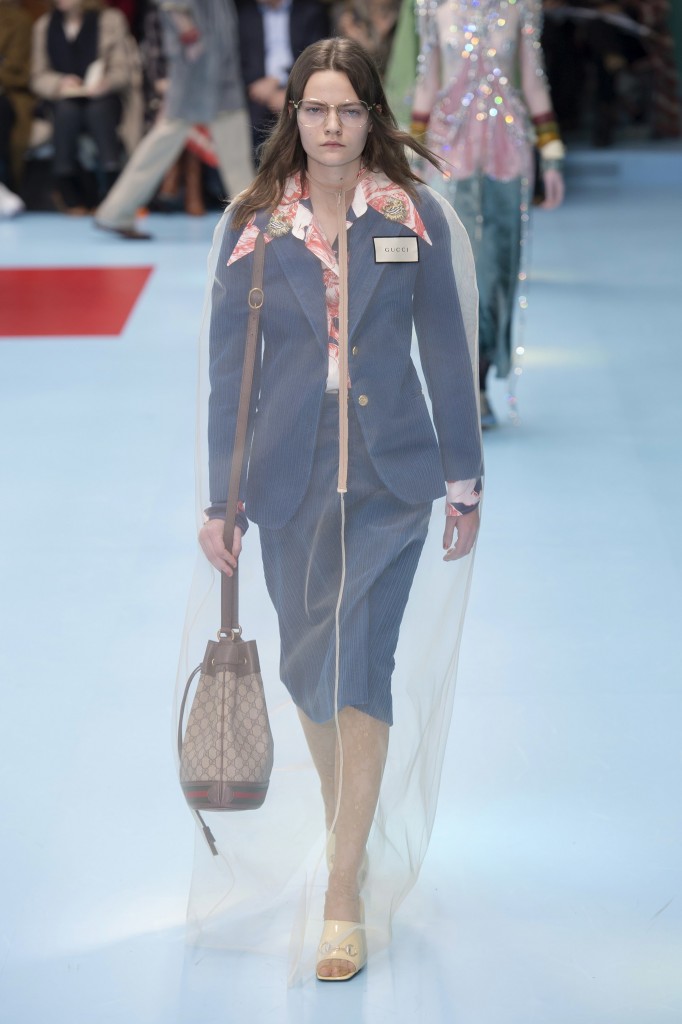 And the nods to cultures from around the world – pagodas, jeweled headdresses, balaclavas, American baseball team logos – was it a message that despite sides, we are all in this mish-mosh together? 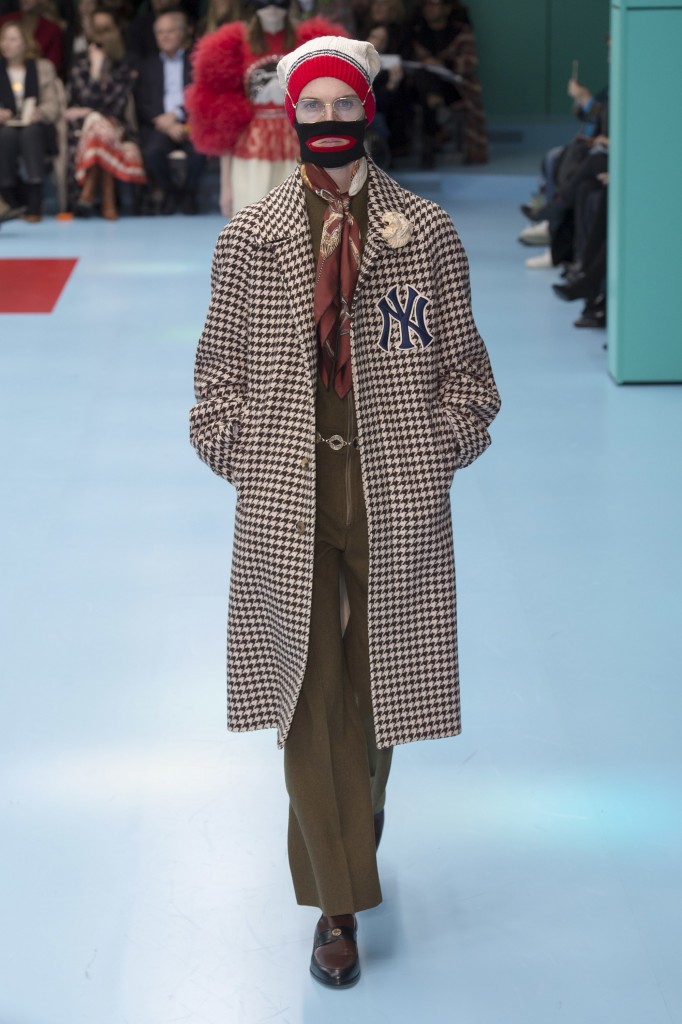 Dolce and Gabbana have, once again, taken us to church for Fall 2018. Tongue-in-cheek religious iconography (in addition to drones carrying purses!) came down the runway on proportions geared toward those not afraid of a little volume and slouch.

In a nice contrast to the Catholic patriarchy, phrases like “I’m the Queen of my life” were displayed prominently down the front of joggers as a nod to the powerful women Dolce and Gabbana count as clientele. 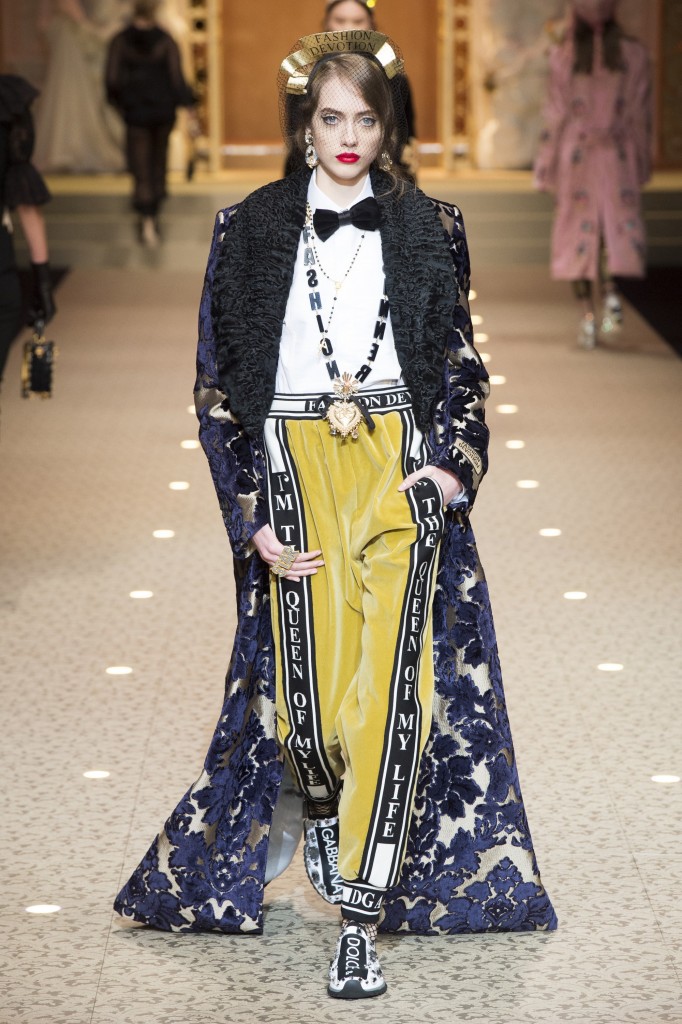 Preach! This look says the Dolce and Gabbana woman leads her daily sermon in a power suit and fishnet anklets, no less. 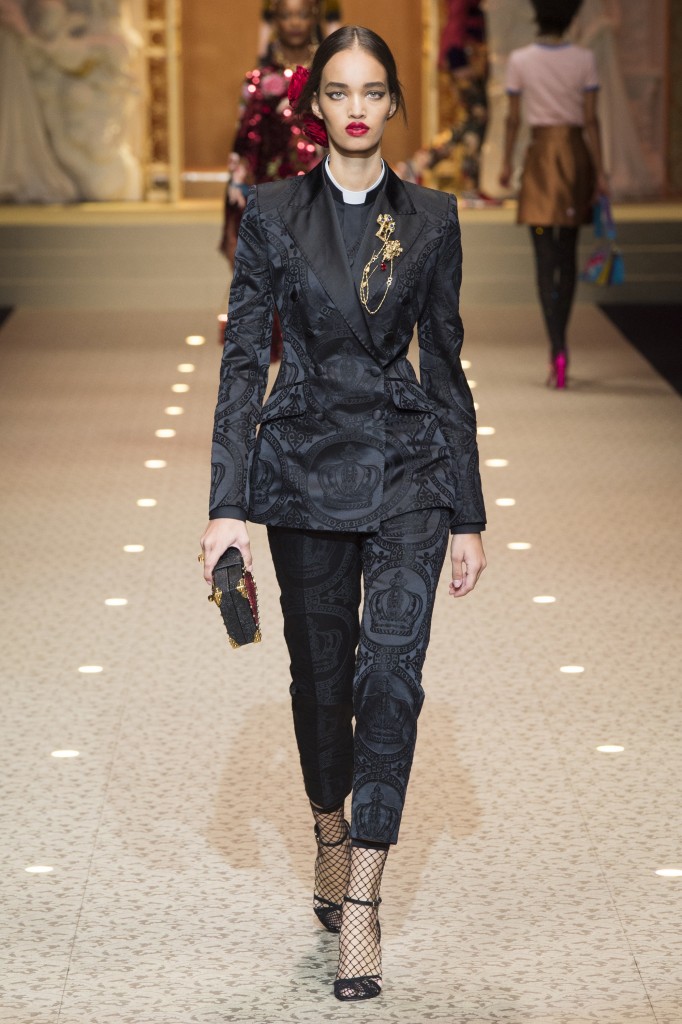 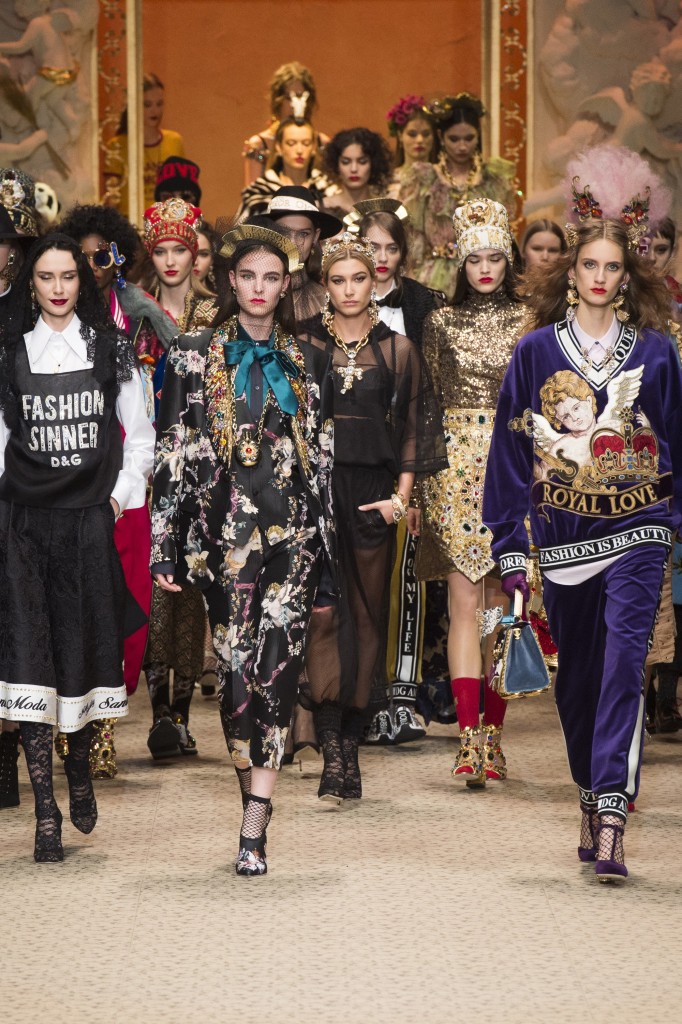 For me, Jil Sander is a palette cleanser and the best cure when I suffer from fashion week overload.

So just for a moment, let the theatrics and embellishments go, and allow the following monochromatic, minimalistic, beautifully cut and sewn looks bring you back to a state of fashion calm. 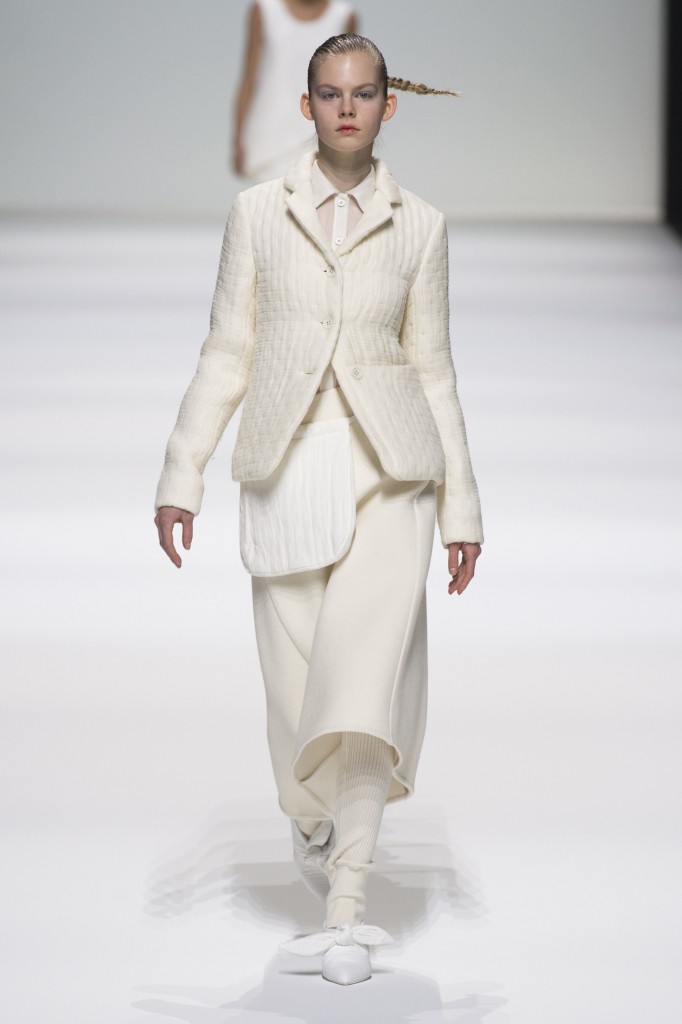 And ahhhh…head-to-toe foxy zen. For women and men, in my humble (and androgyny-loving) opinion. 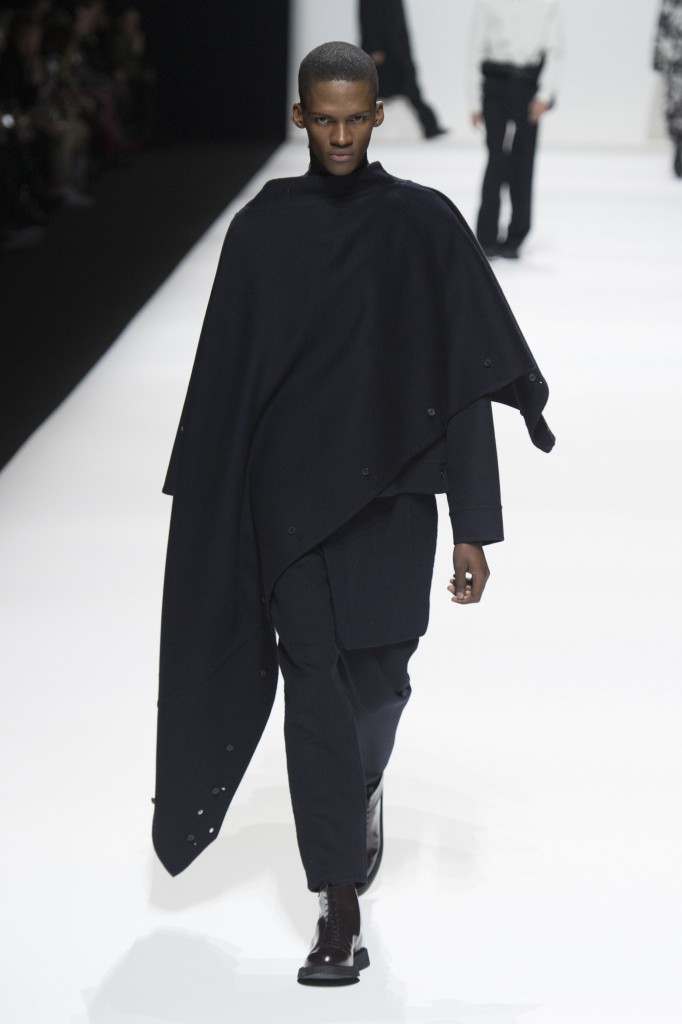 While I love a little surprise and delight, there’s nothing like being able to count on my fashion favorites. Thanks, Jil (well, Luke and Lucie Meier). I needed that.

That’s a wrap on London and Milan fashion weeks. What have I left out? Which looks are your standouts? As always, we want to hear your thoughts below.