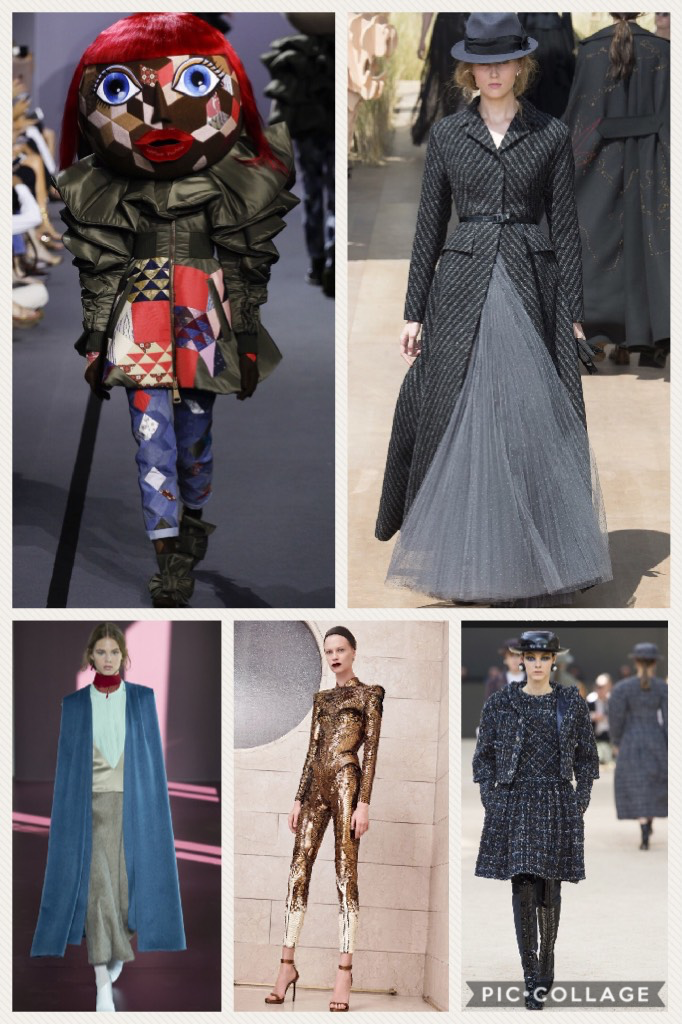 Parisians represent the epiphany of chic. As French couture houses have long created a world of fantasy and beauty that only a privileged few were able to attain, today’s couture explores femininity beyond the ballgown.  The Fall 2017 Couture collections embrace the chance to find the feminine in both high-necked tailored coats, to bright floral frocks. Gone are the days when one style had to fit all – today’s couture is for everyone with the means to pay the hefty price tag.

Couture shows are an adventure, they are fashion fantasies come true. Although a majority of shows have focused on muted shades of grey, black and metallic silver, the pieces are far from drab. With splashes of pink and red, Fall 2017 Couture is an exploration in the space between feminine tailoring and flowing gowns. Just as impressive as the theatrics themselves, couture designers also have an impressive ‘front row’ following and the street-style scene is at its best. Here is the best of the couture season. 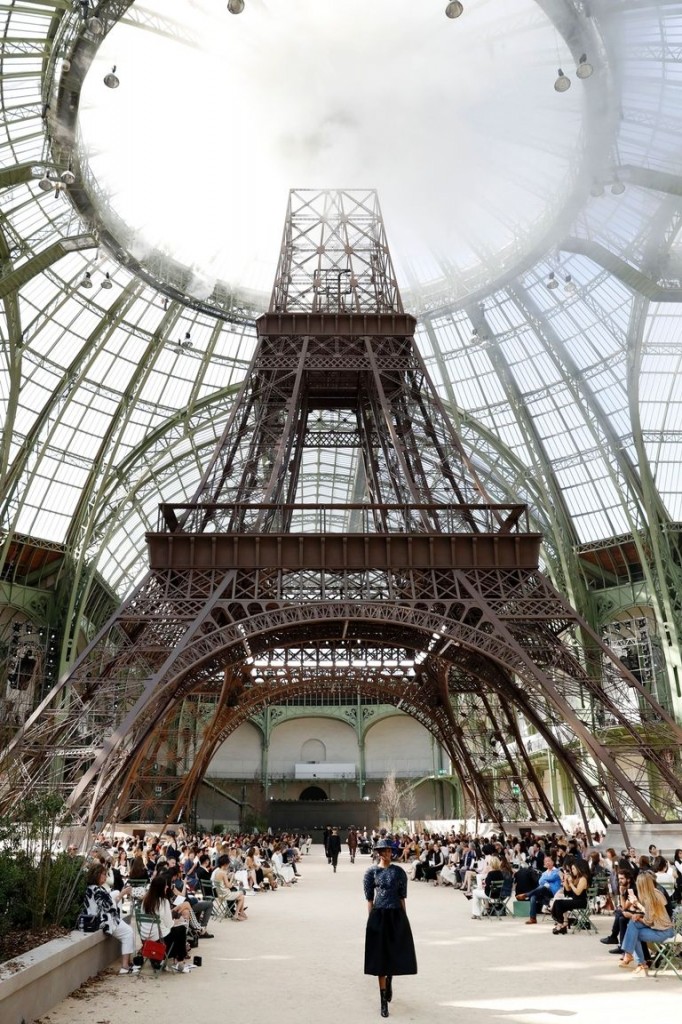 Leave it to Karl Lagerfeld to erect a giant replica of the Eiffel Tower as he took over Paris’ Grand Palais for his Chanel Fall 2017 couture show. The set was inspired by the iconic fashion house’s home-base: Paris, as models walked under the giant Eiffel Tower replica that was created to overarch the runway. The collection was a nod to the elegance and sophistication of the early 20th century. Lagerfeld showcased a collection that harked back to Chanel’s roots – reviving favorite textures, silhouettes and fabrications for a truly exquisite result. The line-up featured somber hues of grays and blacks. The first 25 looks were all variations of gray, later leading to head-to-toe black ensembles and for the finale, a gorgeous Chanel bride, all in white. The label is known for incredible accessories, and this season’s must have: The boater hat – each look was topped off with a variation of the hat in a variety of fabrics, from signature tweeds to satin and even leather. As always, the front row included a number of stars including Pharrell Williams, Julianne Moore, Tilda Swinton, Katy Perry, Tracee Ellis Ross, Rowan Blanchard, Cara Delevingne, Kristen Stewart and more. All looked on adoringly as  Karl Lagerfeld received Paris’s highest honor at the end of the show. The mayor of Paris, Anne Hidalgo, presented the designer with a Grand Vermeil medal, the highest distinction the city offers, for his work in the French capital. Congrats to Karl! 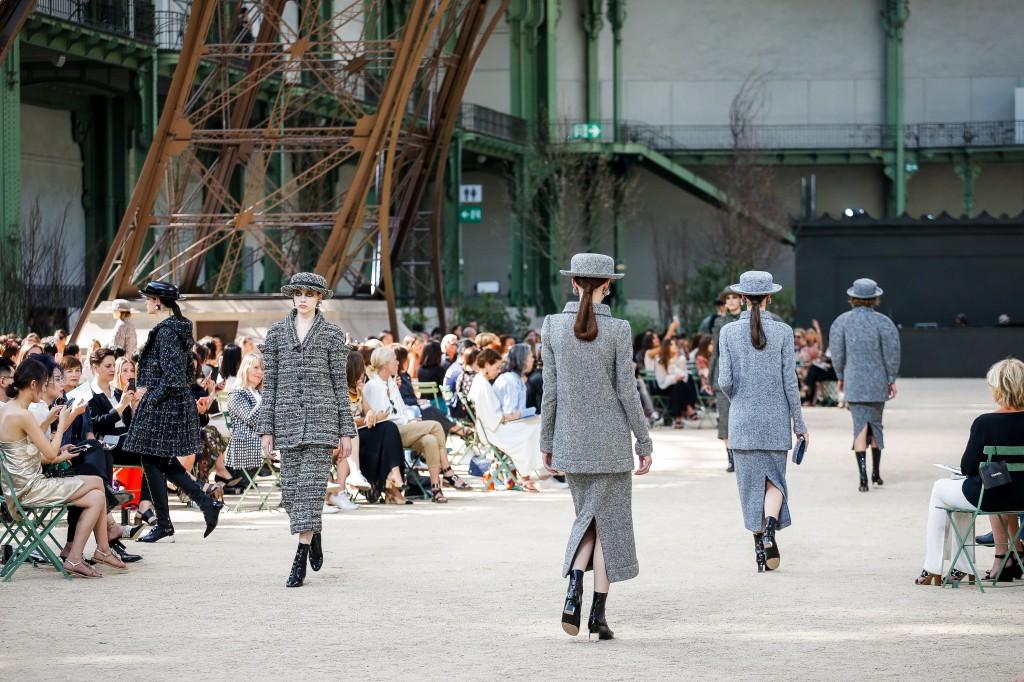 Maria Grazia Chiuri, the designer behind Christian Dior, transported us across the globe in full celebration of house’s 70th anniversary. Maria Grazia Chiuri has taken inspiration from travel, maps, exploration and the beauty of cultural diversity. She looked to the years following World War II, as Monsieur Dior traveled with his collections from California to Tokyo, and to parts of South America. Her theme ran wild with an elaborate set design by Pietro Ruffo, dressed with statues of wild animals from each continent. Chiuri embraced the power of finely tailored suits with a feminist bend. Case in point, a wrap-neck jumpsuit in wool herringbone, belted at the waist and with big functional pockets at the hips. She also showcased beautiful coats, floating chiffon dresses and a dramatic portrait neckline velvet dress. This collection was fit for Chiuri’s lady explorer. 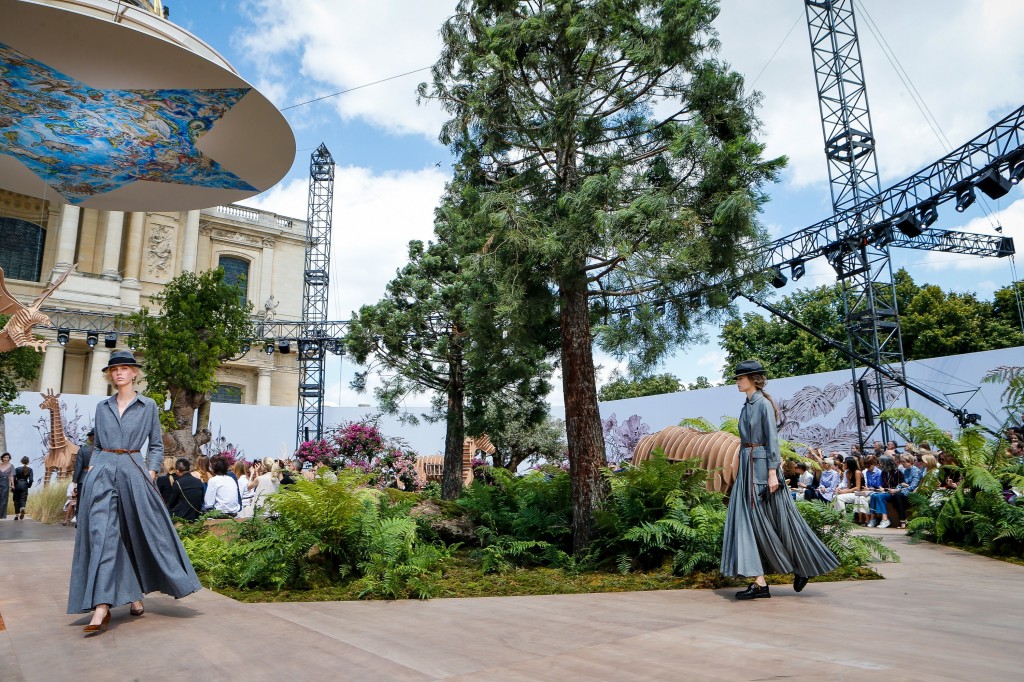 Less is more this season as Donatella Versace stages a low key presentation for her Atelier Versace collection. In an era where images are seen instantly, Donatella Versace opted for discretion as no-one in the audience was able to photograph the collection. A few looks were even hidden from the press and were only shown to those who buy directly from the fashion house. As for the collection, Atelier Versace showed some major evening looks that were extremely sexy and exquisitely hand-crafted: beautiful and intricate embroideries – all bronze metallic scale embroidery, silver chains suspended in cobweb-like formations, and silver leaf embroideries.  For the first time, the house featured a few pieces that were 3-D printed, such as an intricate scrolling neckline on a long gilded dress. 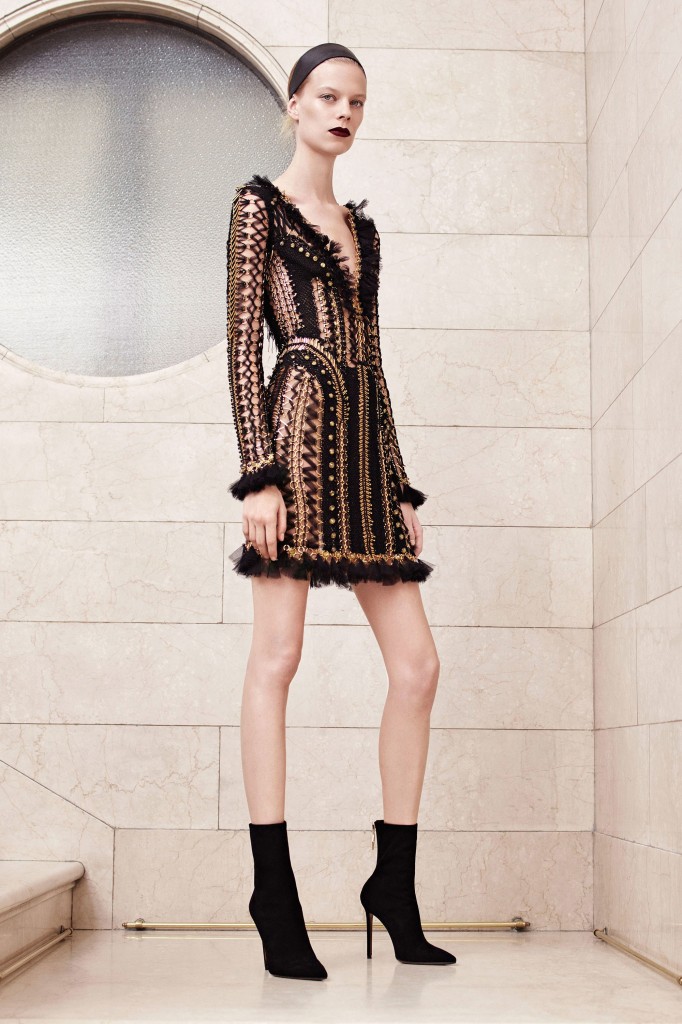 Life-size, giant, bobble-head dolls made their runway debut at Victor& Rolf this season as designers Rolf Snoeren, with Viktor Horsting suggested that “these [dolls] are fighting for a better world” via the patchwork-symbolizing unity. The duo certainly made a statement as they manipulated high-tech Japanese fabrics through pleating, padding, ruffles and intricate folds. Case in point: a giant, bow-shaped bomber. The designers also showcased relatively wearable dresses, coats, and plenty of jeans that will end up in women’s closets. 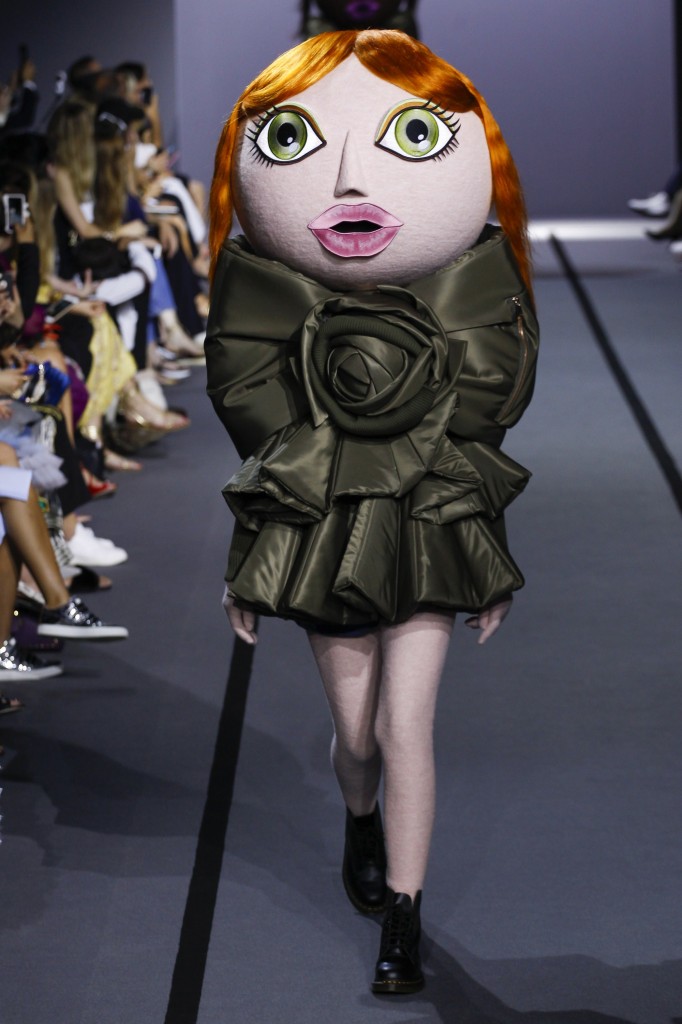 This season, Pierpaolo Piccioli found an unlikely source of inspiration for his Valentino couture collection – the Vatican. Valentino’s atelier literally sits in the shadow of the Vatican, but this collection was anything but solemn. Pierpaolo Piccioli drew a line between the notions of the church’s sacred rituals and the practice and of haute couture. The collection featured hooded capes and silhouettes that resemble the robes of priests, and there were hammered metal bags with enamel mosaic details in the shapes of animal heads meant to symbolize the seven deadly sins. Overall, the collection was heavenly. 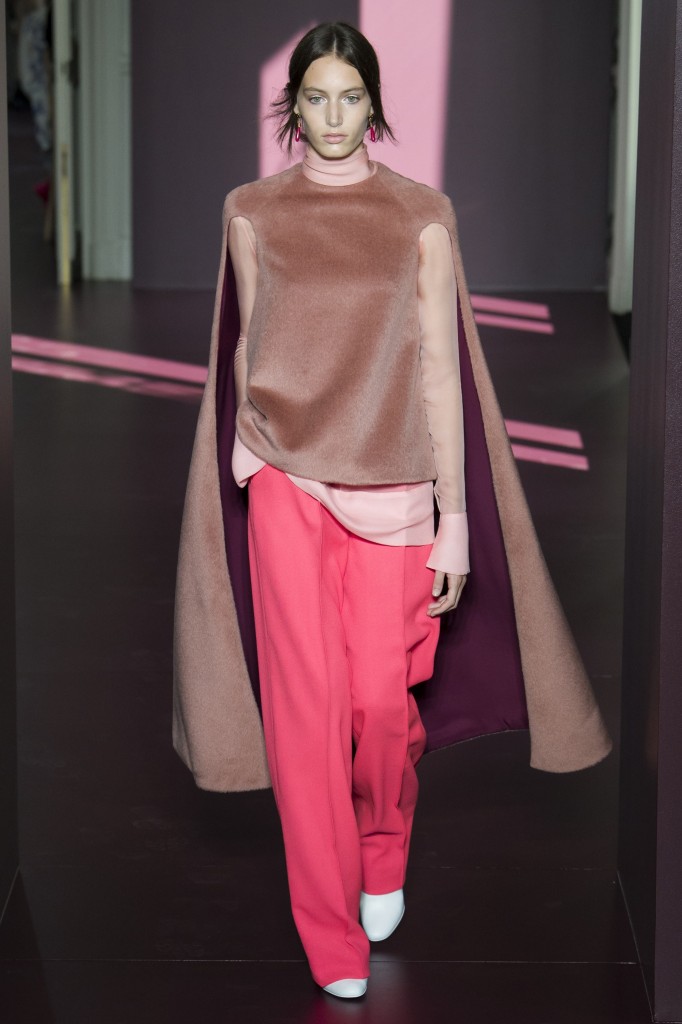