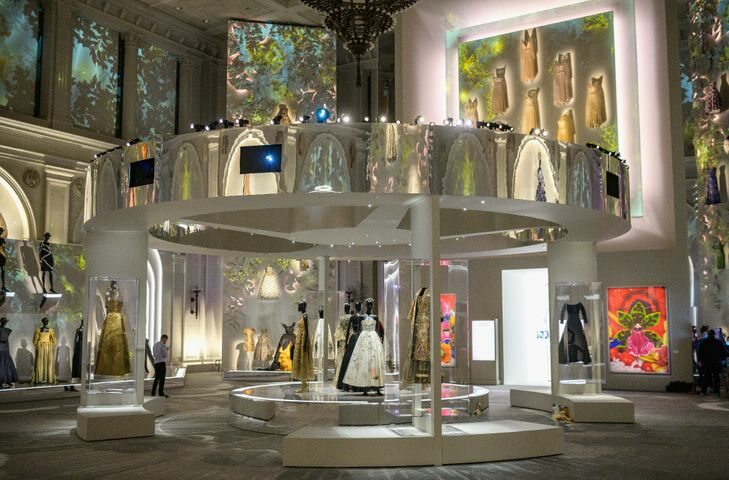 The Brooklyn Museum is giving every museum with a fashion wing a run for its money!

Pre-Covid, the Brooklyn Museum hosted Pierre Cardin: Future Fashion, which was on exhibit from July 20, 2019 to Jan 5, 2020. And now, NYC’s third largest museum is showcasing another masterful exhibit, Christian Dior: Designer of Dreams. Like most fashionistas, when we think of the House of Dior, the ‘New Look’ comes to mind, well, get ready…it’s way more than just another heritage house!

In a Time Out magazine interview with Matthew Yokobosky, Senior Curator of Fashion and Culture, “The Brooklyn Museum has a long record of recognizing important contributions in the history of fashion design, from ‘The Story of Silk (1934)’ to the groundbreaking ‘Of Men Only (1976)’ to the recent ‘Pierre Cardin: Future Fashion (2019’) and now ‘Christian Dior: Designer of Dreams.’ Each exemplifies the power of fashion to influence and shift visual culture at large.” 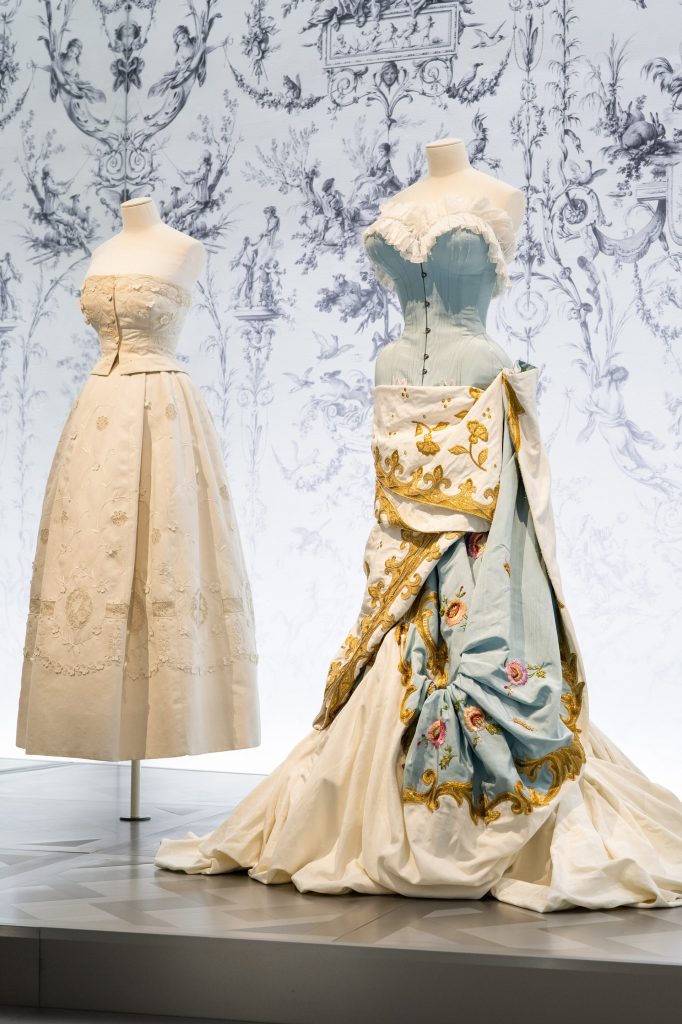 Christian Dior: Designer of Dreams opened to the public on September 10, 2021, and will be on display until Saturday, February 19, 2022. The exhibit, co-curated by Dior scholar Florence Müller of the Avenir Foundation Curator of Textile Art and Fashion at the Denver Art Museum, fully explores the high fashion history of the House of Dior that dates back to the turn of the 20th century, when the French designer Christian Dior founded the label. 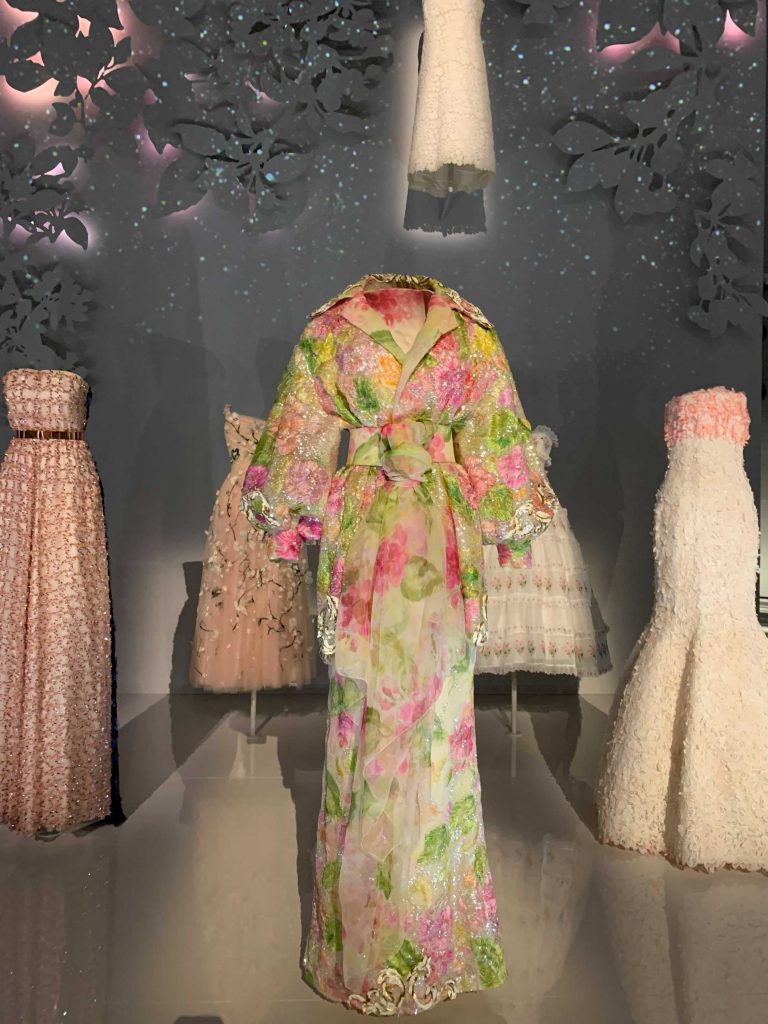 The multi-gallery exhibition transports guests to the mystical world of the House of Dior with objects that mostly hail from the vast Dior archives of some 200 haute couture garments, as well as photographs, archival videos, sketches, vintage perfume elements and accessories. 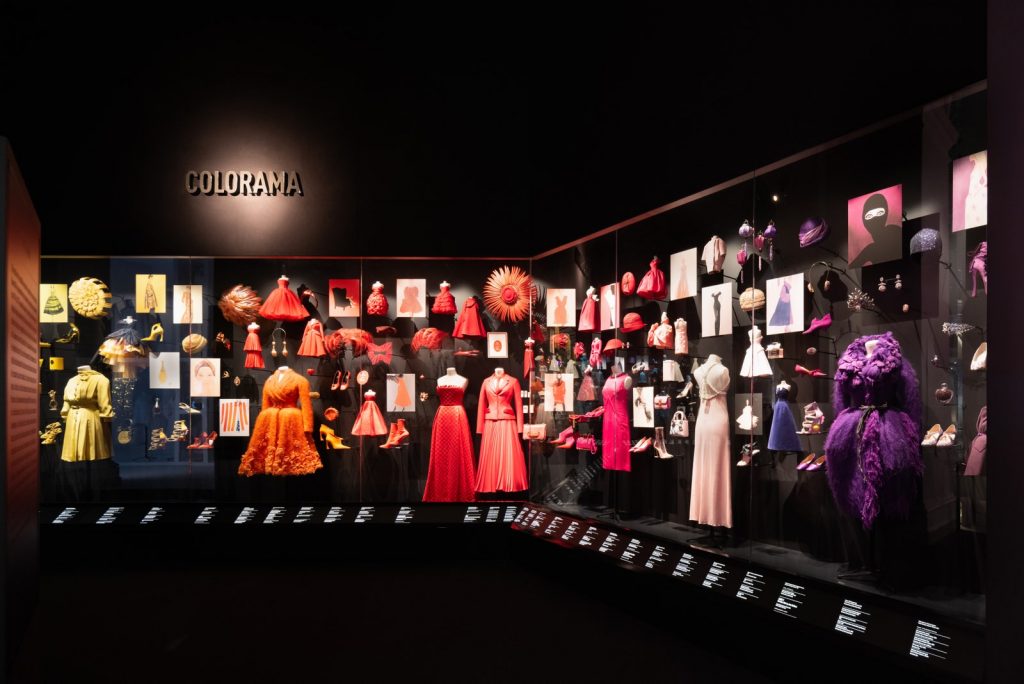 Upon entering the circular-shaped exhibit, guests are captivated with a bold video of models strutting down the runway in a variety of Dior looks. Visitors are then thrust into mid-20th century fashions looks that were once worn by starlets like Marilyn Monroe and Audrey Hepburn. 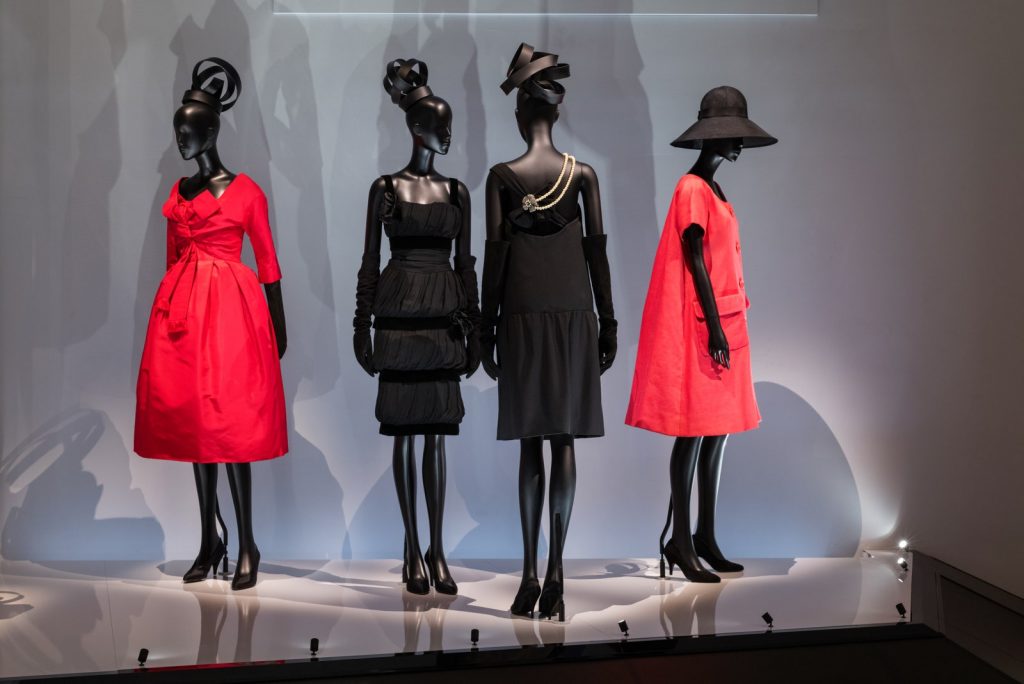 The exhibition is set up within two rings — an outer ring featuring distinct sections that detail the history, the legacy and the inspiration of Christian Dior, while and the inner ring is where ‘The Enchanted Garden’ exists.

The majority of looks are modeled on mannequins along the walls, but a few exceptional looks are pulled out to give guests a 360-degree view of the garments. Once you enter the inner circle, the climax of the exhibition reaches new heights as it transforms into a whimsical space where Dior’s creations become part of the landscape that seemingly float up to the ballroom’s ceiling with projections of clouds and birds that move across the walls.

The exhibit’s creative design lets you to dig right into the subject matter at hand – fashion at it’s best. Each Dior look is a masterpiece in and of itself. The timeless ball gowns, the elegant suits, and the form-fitting jackets are all highlighted in the exhibit. The haute couture on view exemplifies many of the French couturier’s fabled silhouettes, including the “New Look”, which debuted in 1947. Guests have the opportunity to get a close-up view of these  incredible garments, actually getting to see the intricate embroidery, trim, lace and construction of almost every piece (with the exception of the looks that are near the actual ceiling). 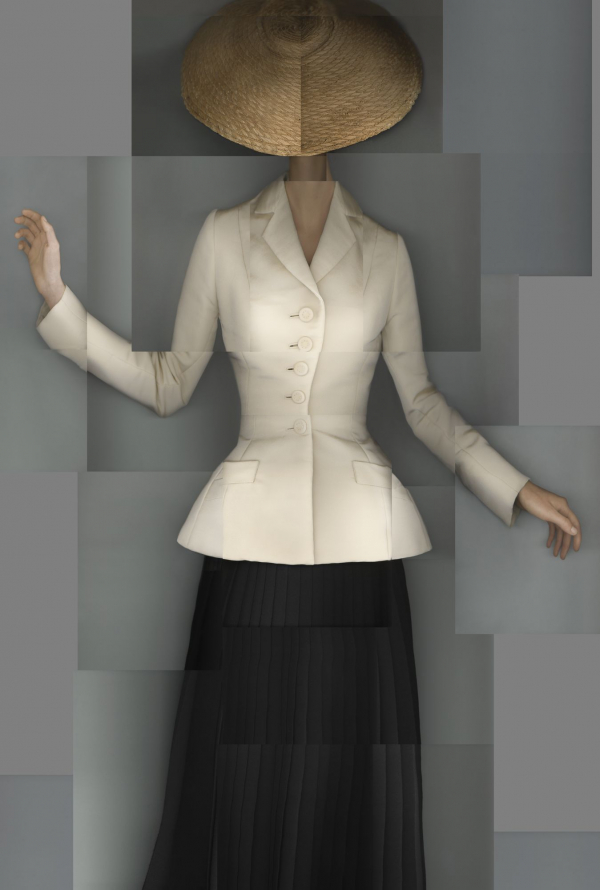 Aside from the breathtaking creations in the installation, the exhibition also features a section of Dior fashion photographed by some of the world’s most superb fashion photographers such as Richard Avedon, Irving Penn, Gordon Parks and Richard Rutledge. These awe-inspiring images are inspirational – not only because of the Dior looks featured in the pictures, but of the sheer beauty of the photos themselves, black and white and some in dramatic color.

Throughout the decades, celebrities across the globe have worn Dior for a variety of events, from red-carpet appearances to the Oscars. These particular looks are featured in a section identified as “Stars in Dior”, which is covered with literal projected stars. In this segment guests get to view the exact looks worn by celebrities over time, from Jennifer Lawrence and Nicole Kidman to Princess Diana and Grace Kelly. Each outfit corresponds back to the photo of the celebrity who wore it. 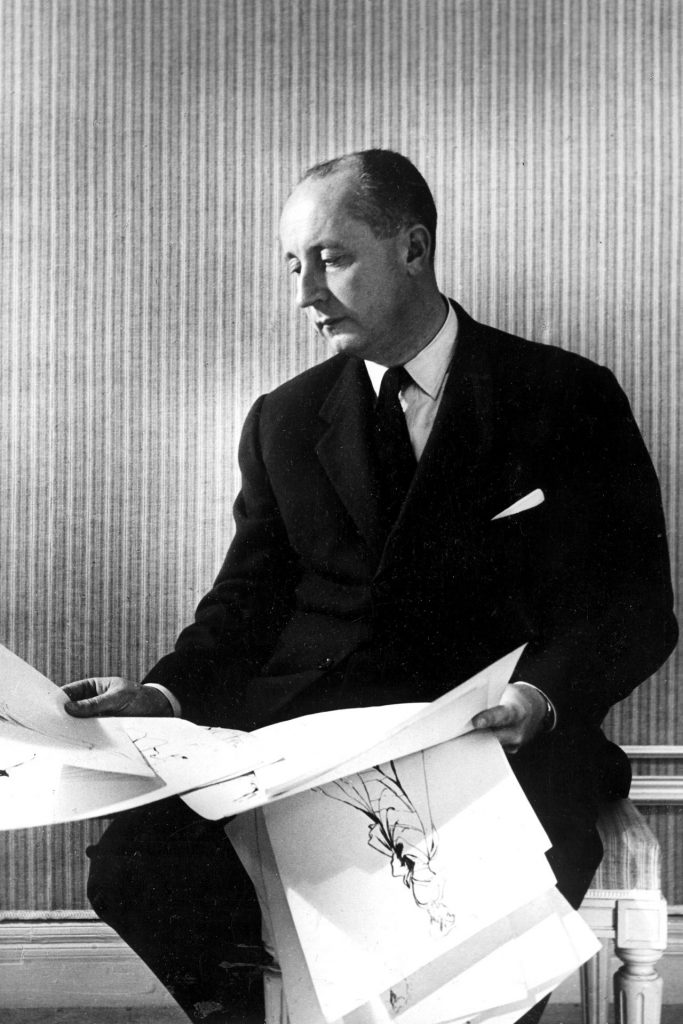 For those museum-goers interested in fashion history, you’re in luck! You will learn about the history and legacy of the House of Dior’s founder Christian Dior, as well as the creative artistic directors who succeeded him—Yves Saint Laurent, Marc Bohan, Gianfranco Ferré, John Galliano, Raf Simons, and Maria Grazia Chiuri, each of which have exquisite haute couture on display. 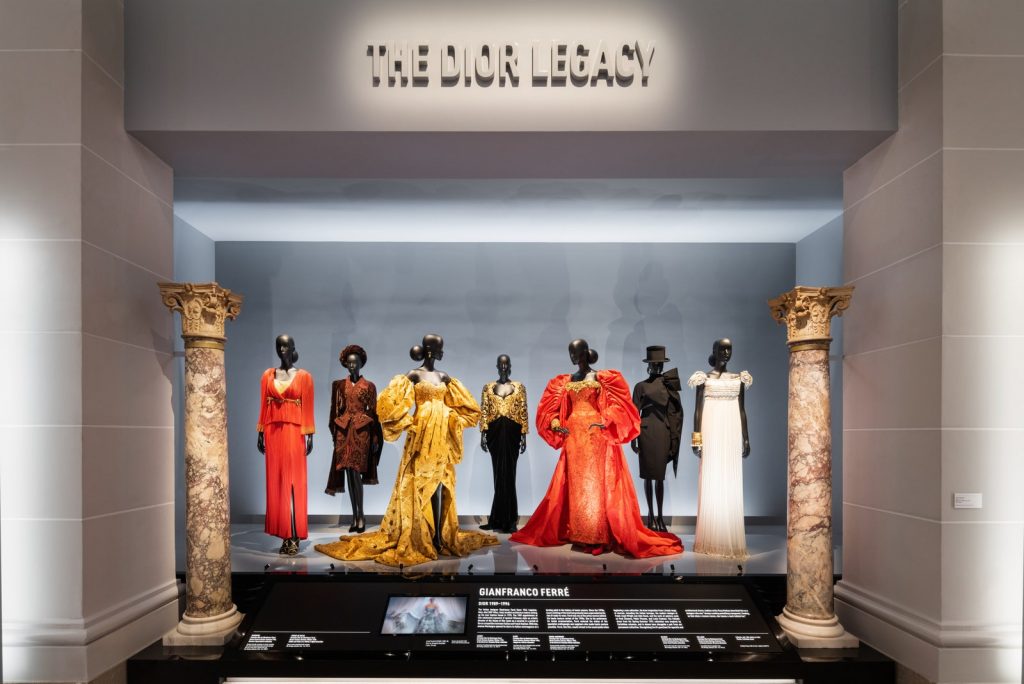 “Today, the work of Maria Grazia Chiuri has reshaped the Dior dream for a new generation, with a worldview that brings with it inclusivity and respect as key philosophical directives. We couldn’t be more excited to present these innovative, beguiling—and technically outstanding—designs to our audiences,” Yokobosky says.

If you can’t make it to the Brooklyn Museum to see the exhibit, here is a virtual tour:

A video on the Christian Dior Exhibition at the Brooklyn Museum. Video Courtesy of Fox 5 New York on YouTube.

As you all know, here at University of Fashion, our mission is to preserve the art and craft of fashion design. Therefore couldn’t agree more with this quote:

“I wanted to be considered a good craftsman. I wanted my dresses to be constructed like buildings, molded to the curves of the female form, stylizing its shape.” ~Christian Dior

So tell us, which great craftsperson would you like to see exhibited next?