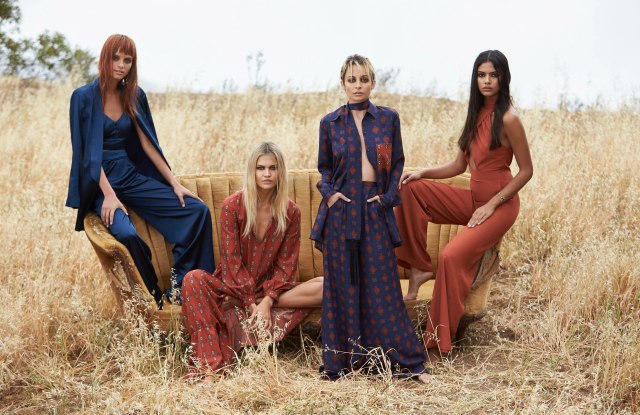 For decades, citizens of the world have looked up to their favorite celebrities and tried to emulate their sartorial choices. With the rise of the internet and social media it has only amplified the public’s celebrity obsession. Celebs are not only praised for their talent as musicians and/or actors, but also as tastemakers, which, more often than not, involves finding the right stylist. These stylist/celeb collaborations even have the power to make or break a trend, as we learned in last week’s blog post about Clark Gable’s ditching of his undershirt in the movie It happened One Night that sent the men’s underwear industry into chaos. And so, it’s no surprise that many celebrities decided to add ‘designer’ to their resume by creating brands that reflect their (and their stylist’s) personal style.

But alas! Celebrity fashion branding is nothing new, in fact, it actually dates back to the 1800s when renowned opera singers and dancers helped set the trends. One of the first celebrity fashion lines was created by Jenny Lind, a Swedish opera singer, who in 1850, became a cultural phenomenon in the United States. As a result of positive reviews and off the chart ticket sales generated from her first American tour with P.T. Barnum, Lind began to produce a range of Jenny Lind-branded merchandise that consisted of gloves, shawls, bonnets, and other fashionable pieces. While no one could confirm if Lind had any actual design input on the products baring her name, it became apparent that celebrity idolization and branding were here to stay. With the introduction of cinema in the early 1920s, celebrity infatuation really began to soar. Ballroom dancer and silent film star Irene Castle, started the first true celebrity fashion brand circa 1917. Thie starlet was named the “Best-dressed Woman in America” at the time and was credited with designing her own collection in partnership with textile manufacturer, Corticelli Silks under the label, Irene Castle Corticelli Fashions. The high-end ready-to-wear collection was filled with glamorous gowns that Castle not only helped design, but also promote. Her role as designer/model/promoter helped create the rubric for celebrity driven brands of the future. Fun fact: Castle is also credited with popularizing the ‘bob’ haircut. Amelia Earhart became a household name in 1934 as the first woman pilot to successfully complete a trans-Atlantic flight. Married to George Putnam, whose family ran the successful publishing firm, G.P. Putnam & Sons Inc., her husband helped pay for her flying by coordinating Earhart’s press tours and endorsements, including lending her name to a luggage collection under the Baltimore Luggage Company. The Amelia Earhart luggage collection was produced from 1933 up until the 1970s. In addition, Earhart lent her name to a clothing collection in 1934 that was launched in 30 major cities, consisting of affordable clothes for active women. While it is recorded that Earhart’s designs themselves did not stand out from others at the time, it is believed that hers was the first collection sold as separates, meaning, women were able to buy a differently sized top to accompany their skirts.

For decades, the concept of celebrity fashion lines only increased and prospered with brands by socialite Gloria Vanderbilt, tennis star René Lacoste, super-model Twiggy, and Charlie’s Angels actress Jaclyn Smith  who found success with her women’s fashion collection for Kmart. Countless others would follow list is dizzying.

By the 2000s, celebrity fashion exploded, mostly due to the effect of influencer marketing and the internet. An insatiable public just couldn’t get enough of what their fav celebs were wearing or promoting on the red carpet, on their social media channels, or on TV. In the early 2000s, you weren’t a big star unless you launched a fashion line. 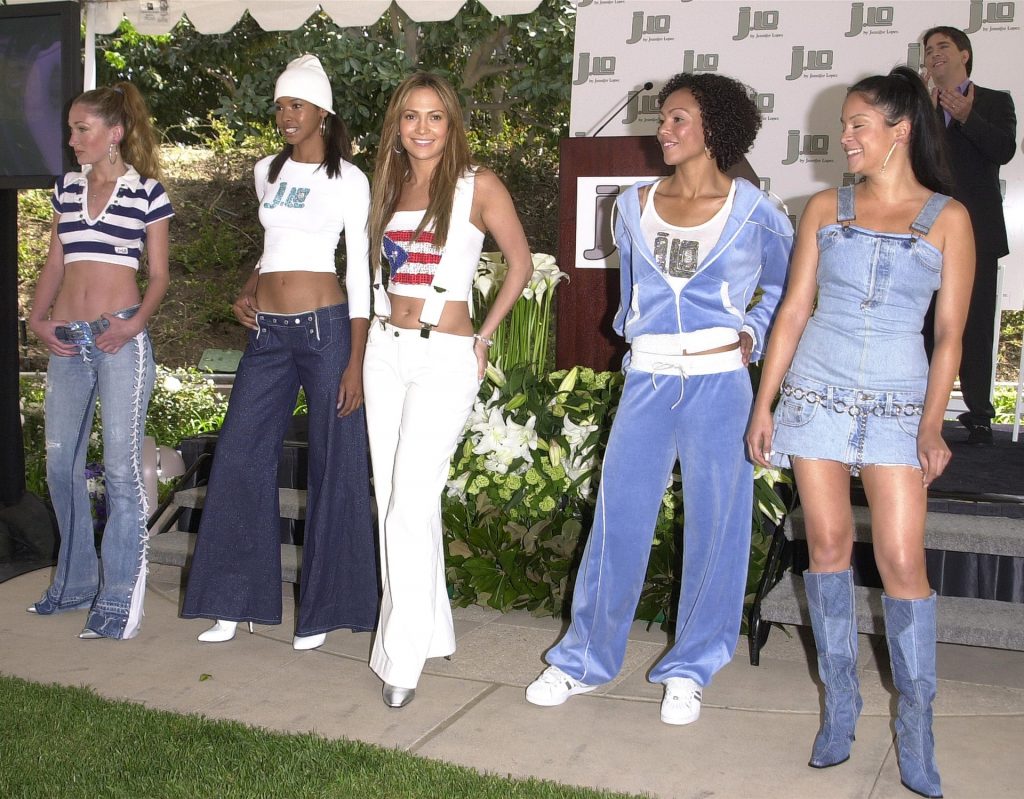 Jennifer Lopez Center with her models all dressed in her brand Sweetface which launced in 2001 but shuttered in 2009. (Photo Credit: Getty Images)

Early adopters of the celebrity fashion brand craze were celebs with mega star power such as Jennifer Lopez, Eve, Beyoncé’s House of Deréon, Gwen Stefani, and Lindsay Lohan’s short-lived stint for Emanuel Ungaro, which was a total disaster. While many celebrity fashion lines have come and gone, there are a number of them that have stood the test of time.

Here are a few of the most successful celebrity lines: 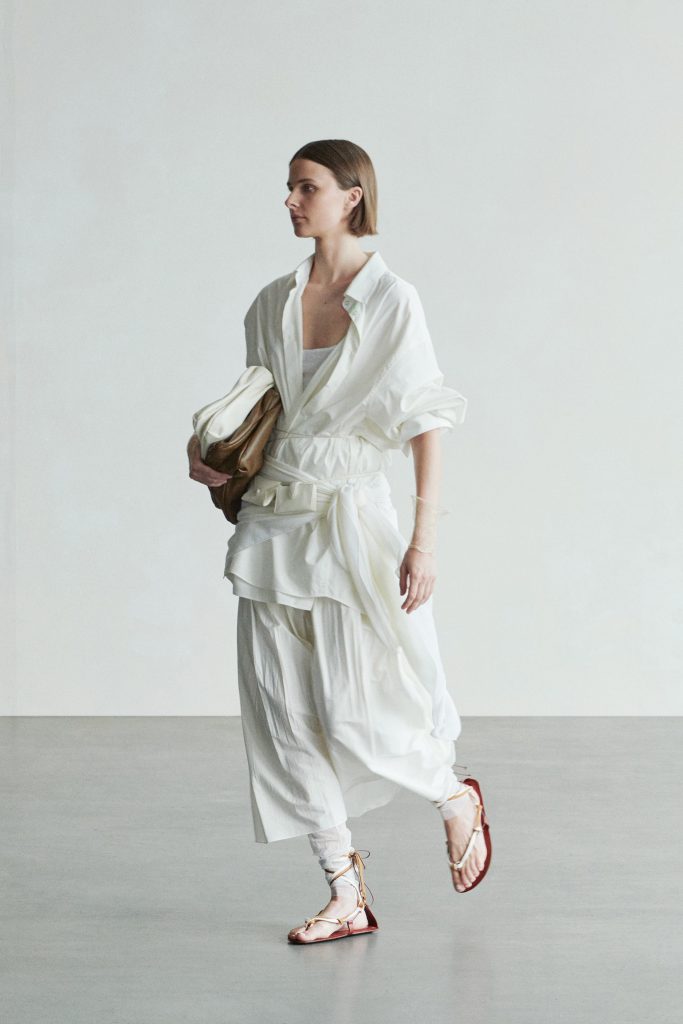 As the Olsen twins became young adults, their effortless, cool-girl style began evolving and they became fashion icons. The Olsen’s quietly launched The Row in 2006, and insisted on not giving any interviews about the label for three years, as they wanted to be taken seriously as luxury designers and not be seen as a ‘celebrity brand’. The collection is filled with luxurious, chic, minimalistic pieces, all at a high-end designer price-point. The Row can be found at Bergdorf Goodman, Net-A-Porter, Saks Fifth Avenue, as well as in their own boutiques. By 2012, they won their first CFDA Womenswear Designer of the Year award, strengthening their status in the American fashion scene. 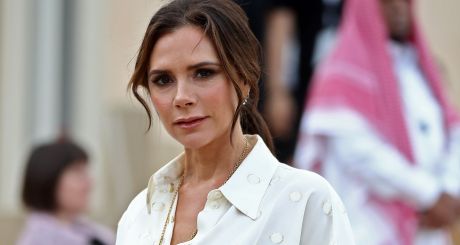 Who would have ever believed that pop star Victoria Beckham (of the British band Spice Girls) would turn out to be one of the most well-known fashion designers worldwide? Married to soccer star David Beckham, the singer-turned-designer was determined to shed her pop star image and be taken seriously as a luxury designer. 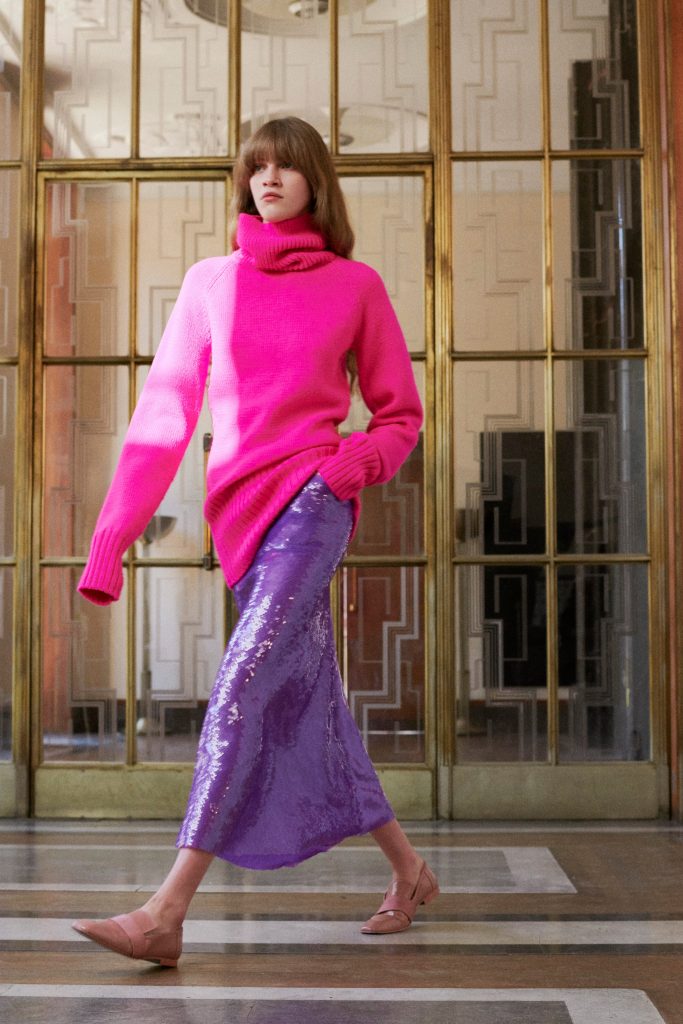 Victoria Beckham launched her namesake label in 2008 with a low-key presentation but soon became a fixture at New York Fashion Week. Beckham’s collection is always filled with elegant and sophisticated ready-to-wear looks focusing on clothes that real women want to wear, all in luxurious fabrics. Beckham also offers lavish leather bags that are handmade in Italy as well as shoes and sunglasses. Her collection can be purchased on Net-A-Porter, Neiman Marcus, Saks Fifth Avenue and a number of other high-end boutiques.

Beckham was awarded an OBE for her services to fashion and was honored by Prince William at an awards ceremony in Buckingham Palace. When she received her award from the Duke of Cambridge, she naturally wore her own creation. 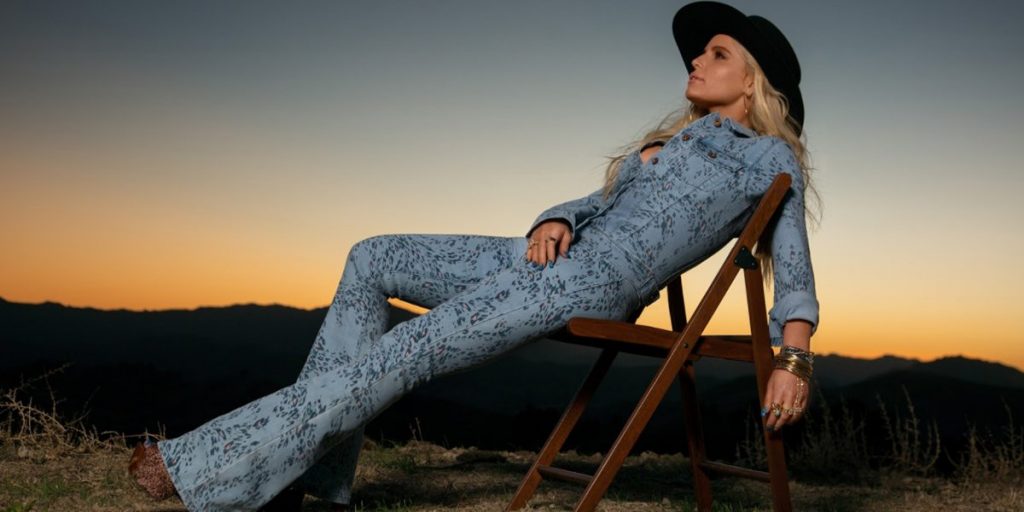 In terms of dollars and cents, one of the most successful fashion brands is The Jessica Simpson Collection. The singer and reality television star may not be as fashion forward and stylish as her counterparts, but her name and personality resonate with many consumers. Love her or hate her, Simpson is laughing her way to the bank.

Launched in 2006 as a shoe collection with business partner Vince Camuto,  Simpson rapidly expanded her brand to include clothing, sunglasses, handbags, accessories, and jewelry. Every year since 2010, the Jessica Simpson label has reportedly pulled in about $1 billion in annual sales and is the first clothing company owned by a celebrity ever to break this figure. The label now sells pieces in 30 different product categories in major department stores across America.

“I want to make every woman feel confident in what they’re wearing,” Simpson said in 2014, in an interview with Forbes. “I do feel like we’re very fashion-forward, but we also listen to the consumer.” 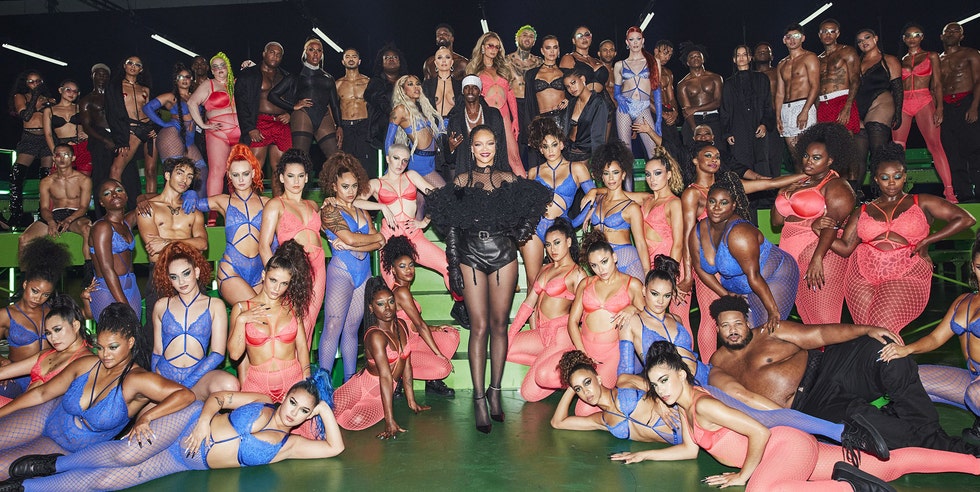 Everything Rihanna touches turns to gold. Not only has the pop queen received 9 Grammy Awards, 8 Billboard Awards, and 13 American Music Awards throughout her career, but she also has a number of successful designer collaborations under her belt. In 2014, she collaborated with Puma. Her Fenty X Puma collection not only had cool sneakers with ribbon laces, but Rihanna also had several fashion shows with cool athletic-inspired pieces under the Puma label.

In 2017, Rihanna launched Fenty Beauty, which helped to revolutionize the beauty industry. A year later she expanded her Fenty label to include a lingerie line Savage X Fenty and made waves as she presented her first size-inclusive lingerie collection. Her star-studded Savage X Fenty fashion show has become a must-watch pop culture event —even earning an Emmy nod.

“Before she was BadGalRiRi: music, fashion and beauty icon, Robyn Rihanna Fenty was a little girl in Barbados transfixed by her mother’s lipstick,” Fenty Beauty’s About page reads.

In 2019, Rihanna became the first black female designer at LVMH, the parent company of luxury design houses Dior, Givenchy, and Louis Vuitton. However, in February of 2021, LVMH announced that their partnership with Rihanna was put on hold. 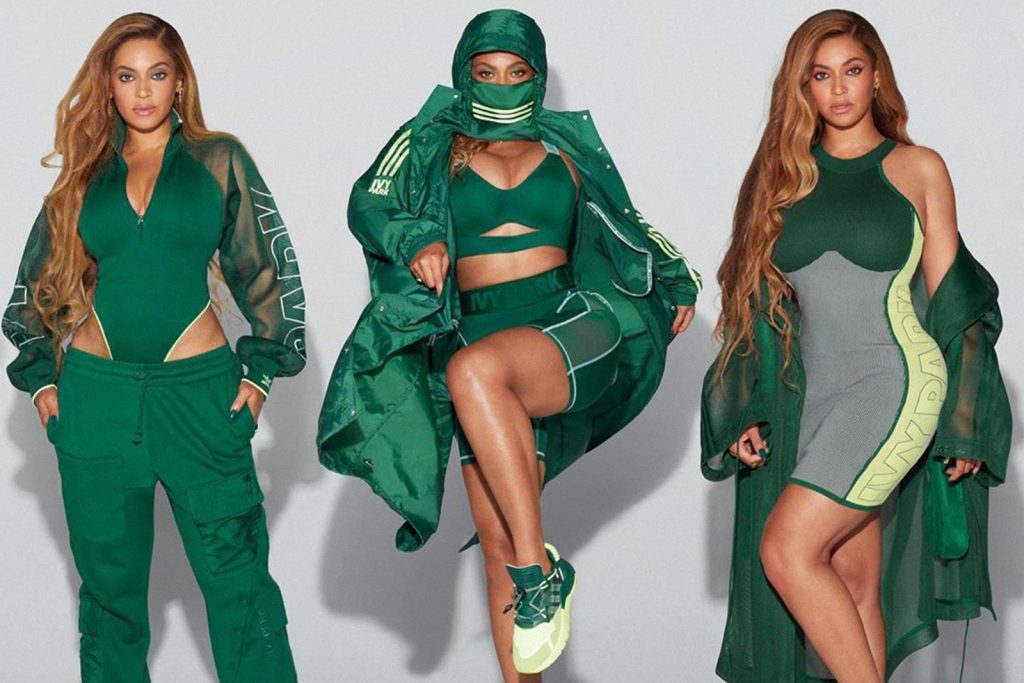 Pop diva Beyoncé is no stranger to the world of business ventures. Her first shot out of the box was the House of Deréon that she ran with her mom. In 2016 the singer launched an activewear line with Topshop. The popular activewear line labeled Ivy Park was a huge success. On November 14, 2018, Beyoncé and Parkwood Entertainment acquired total ownership of the Ivy Park brand away from co-founder Sir Phillip Green following allegations of sexual harassment and racial abuse.

The recording artist has been expanding her Ivy Park line and subsequently entered into a partnership with Adidas in 2019. In a statement released on the official Ivy Park website, Beyoncé stated, “This is the partnership of a lifetime for me… Adidas has had tremendous success in pushing creative boundaries. We share a philosophy that puts creativity, growth and social responsibility at the forefront of business. I look forward to re-launching and expanding Ivy Park on a truly global scale with a proven, dynamic leader.”

On January 17, 2020 the collaboration between Ivy Park and Adidas launched. In only six minutes the collection sold out on Adidas’s website. The line is available in select Adidas stores worldwide, as well as at Bloomingdale’s, Nordstrom, Foot Locker, and Finish Line locations in the United States. The collaboration also plans to debut a children’s line soon.

So…it looks like celebrity brands are still the rage, even in a pandemic.

So tell us, who is your favorite celebrity fashion brand?