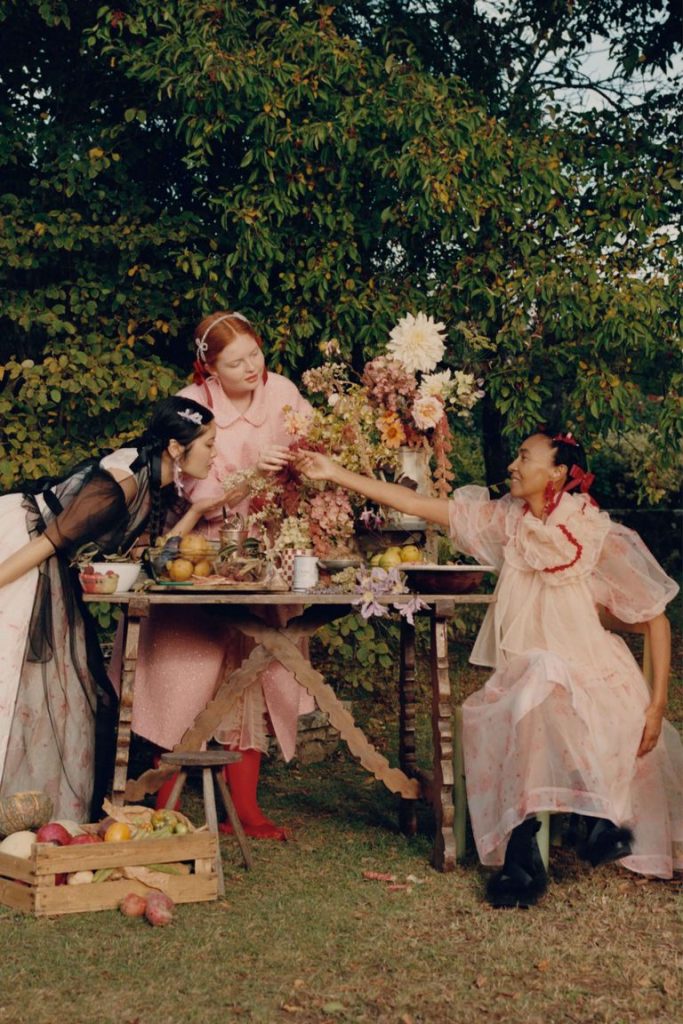 Let’s face it, fashionistas everywhere crave designer clothing, but many cannot afford the hefty price tags that are often associated with luxury fashion brands. So how can luxury houses satisfy the desires of the working-class fashionista? Through collaborations of course! Overall, designer collaborations are well-received, highly sort after, and especially difficult to get your hands on before they sell out. Thanks to marketing and retail success, the number of designer collaborations have hit the roof in recent years, and with the help of celebrity fans, it’s not hard to see why these pieces are in such high demand. 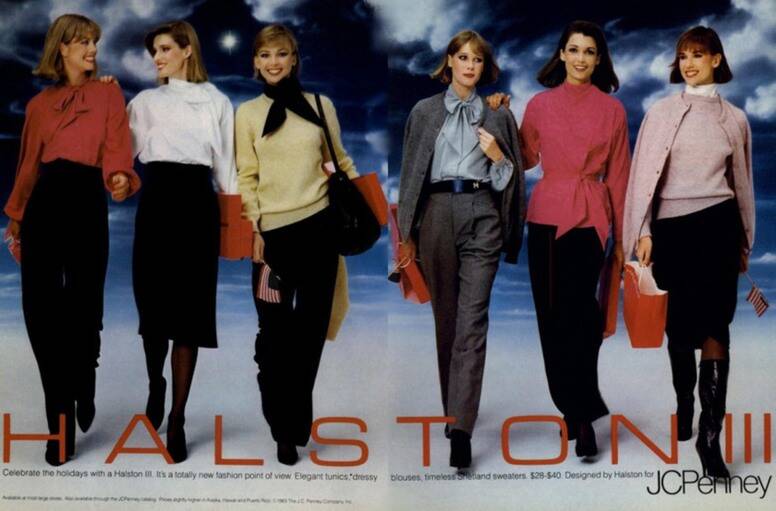 An advertisement for Halston for JCPenney. (Photo Credit: JCPenney)

Halston can be attributed to creating the very first mass-market collaboration in 1983 between his namesake label and JCPenney. Halston was a successful, disco-era designer who was known for his minimalist yet glamourous aesthetic; as well as his infamous Studio 54 days where he partied with and dressed close friends Liza Minnelli, Bianca Jagger, and countless others. Halston created the controversial, cheaper Halston III line with department store giant JCPenney but the collaboration was was poorly received by elite department stores, such as Bergdorf Goodman, which stopped carrying the high-end Halston Limited label out of fear that the JCPenney collab would cheapen Halston’s overall appeal. 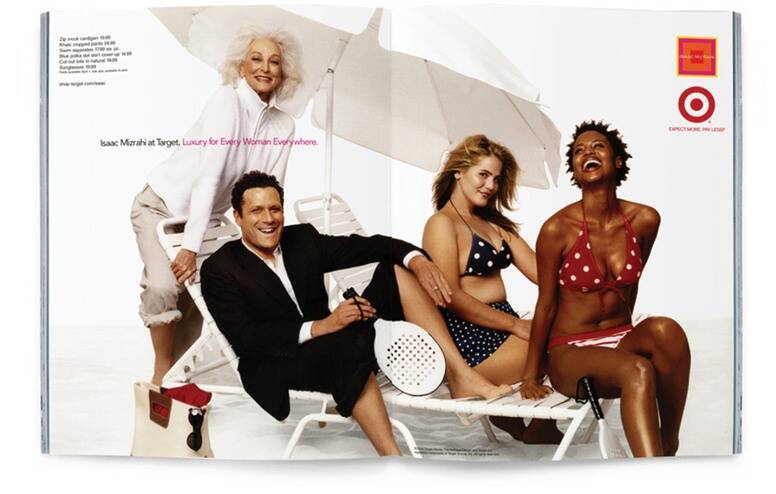 An advertisement for Isaac Mizrahi for Target. (Photo Credit: Target)

In 2002, Isaac Mizrahi, who was known for his vibrant and playful joie de vie collections, teamed up with Target. The Isaac Mizrahi x Target partnership was the first and longest-running Target designer collaboration (lasting from 2002-2008), and it introduced the designer to mainstream America. The extremely lucrative collaboration bolstered the designer’s own career with the collection eventually including accessories, bedding, housewares and even pet products. This collaboration kick started the luxury designer mass market craze. 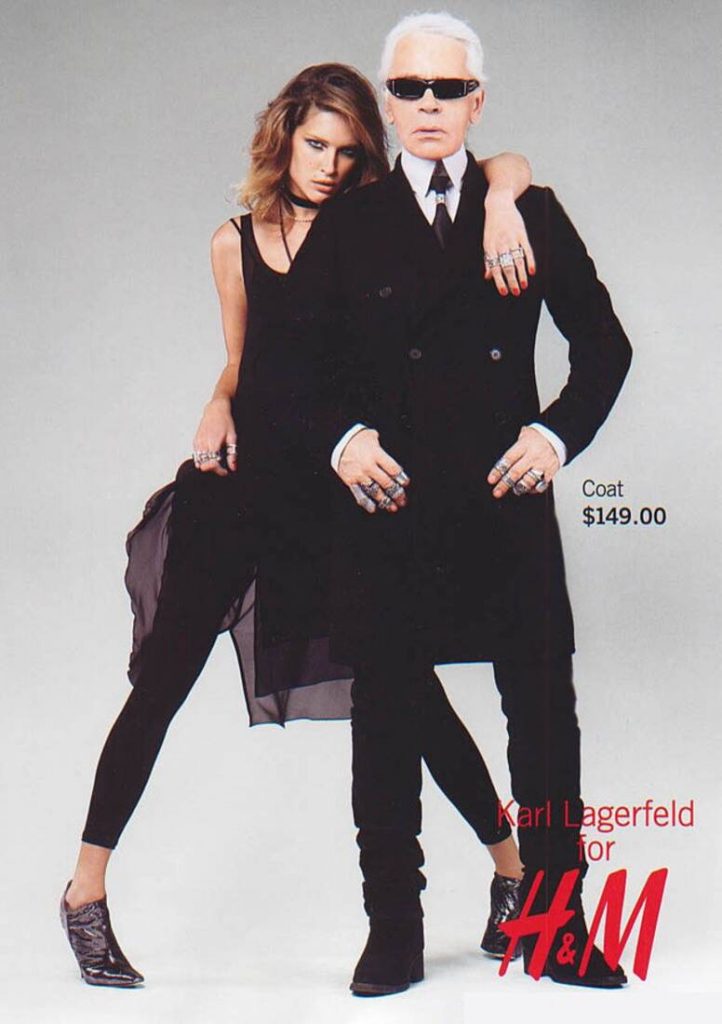 An advertisement for Karl Lagerfeld for H&M. (Photo Credit: H&M)

Swiss retail giant H&M jumped on the designer collaboration bandwagon in 2004 with the legendary Karl Lagerfeld. Known for his sleek black suits, skinny jeans and French rock and roll spirit, despite skeptics, the collection sold out within minutes of the launch. This wildly successful partnership opened the door for a plethora of high-end H&M collaborations to follow and set the precedent for numerous future high-street and designer collaborations.

Once the success of these collabs were made known, the flood gates were opened. Here are a few noteworthy mentions:

Giambattista Valli for H&M in 2019

Virgil Abloh, the creative director of Off-White, partnered with multiple brands ranging from Evian and Rimowa to Ikea and Nike.

SOME OF THE COOLEST COLLABORATIONS OF 2021

A video of the Simone Rocha X H&M collaboration.

The Simone Rocha X H&M collection launched on March 11th to  rave reviews. The Swiss retail giant and the Irish designer, collaborated on a collection that was based off Rocha’s archival hits filled with charming and whimsical pieces. Sustainability is said to be a key factor in this new designer collaboration. Rocha told Vogue US that, coming from a much smaller brand, H&M’s footprint was a big consideration, and that together they were able to source organic cotton, recycled polyester and a new compostable yarn.

Simone Rocha’s house codes are strong and were fully incorporated into her collaboration with H&M. There were plenty of neo-classical references, puffed sleeves and babydoll silhouettes, Lurex tweed, Broderie Anglaise, organza and cloqué fabrics, lots of embroidery, beading and even baroque pearls. It was all so delightfully sweet.

Just in time for the warmer weather, Target is bringing back the Designer Dress Collection for spring 2021. This season the retailer is collaborating with three diverse designers: Alexis, Christopher John Rogers, and Rixo. The rising stars are adding their signature styles to Target, offering a much-needed boost to a girl’s closet. There will be over 70 styles available, ranging in price from $40-60 in sizes XXS—4X, making this Target’s most size-inclusive designer capsule to date. 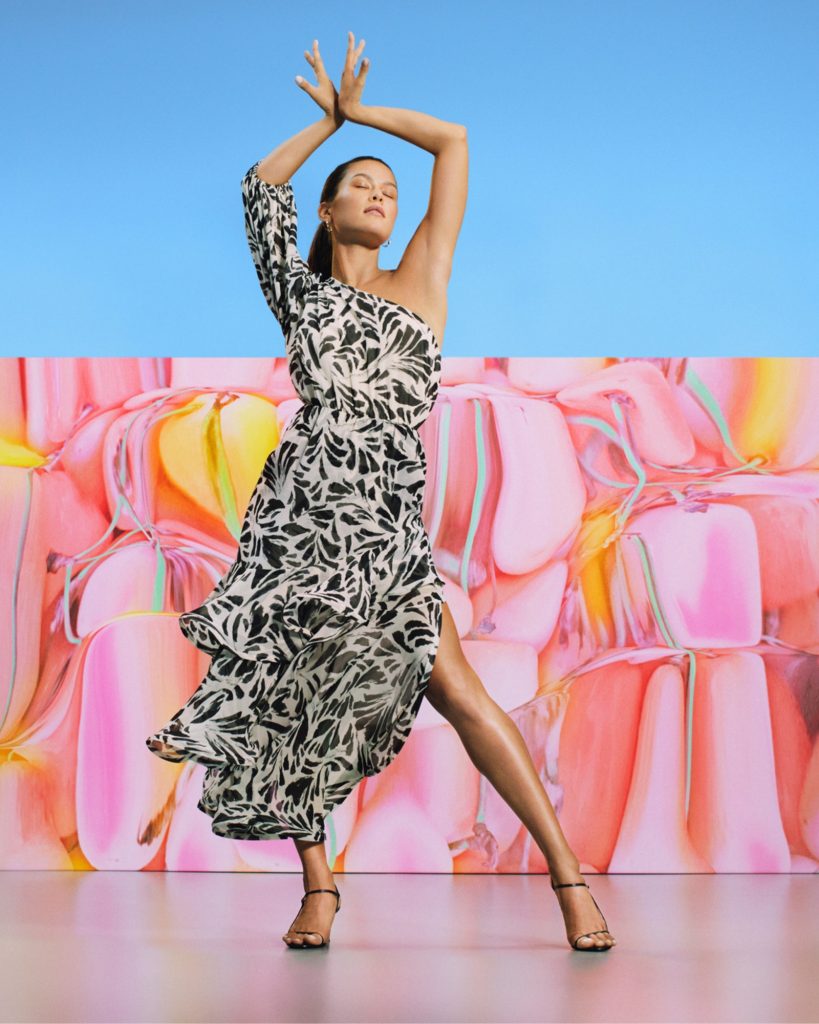 A look from ALEXIS’ collaboration with Target. (Photo Credit: Target)

The Miami-based label Alexis, designed by Alexis Barbara Isaias, is known for its relaxed, feminine silhouettes made for the globetrotter, bringing a wanderlust feel to easy dresses and separates. Her Cuban roots and Miami upbringing definitely influence her free-spirited collections. In an interview with The New York Post, Isaias stated, “I never wanted a design office in New York. The vibrant colors, the culture, the feeling … it’s so important that our roots are in Miami.” And while Isaias loves the nightlife, her Miami is also made up of quiet moments in nature. “To me, it’s a place for family, for connections — to be by the water and feel the breeze. There’s just something in the air here.” 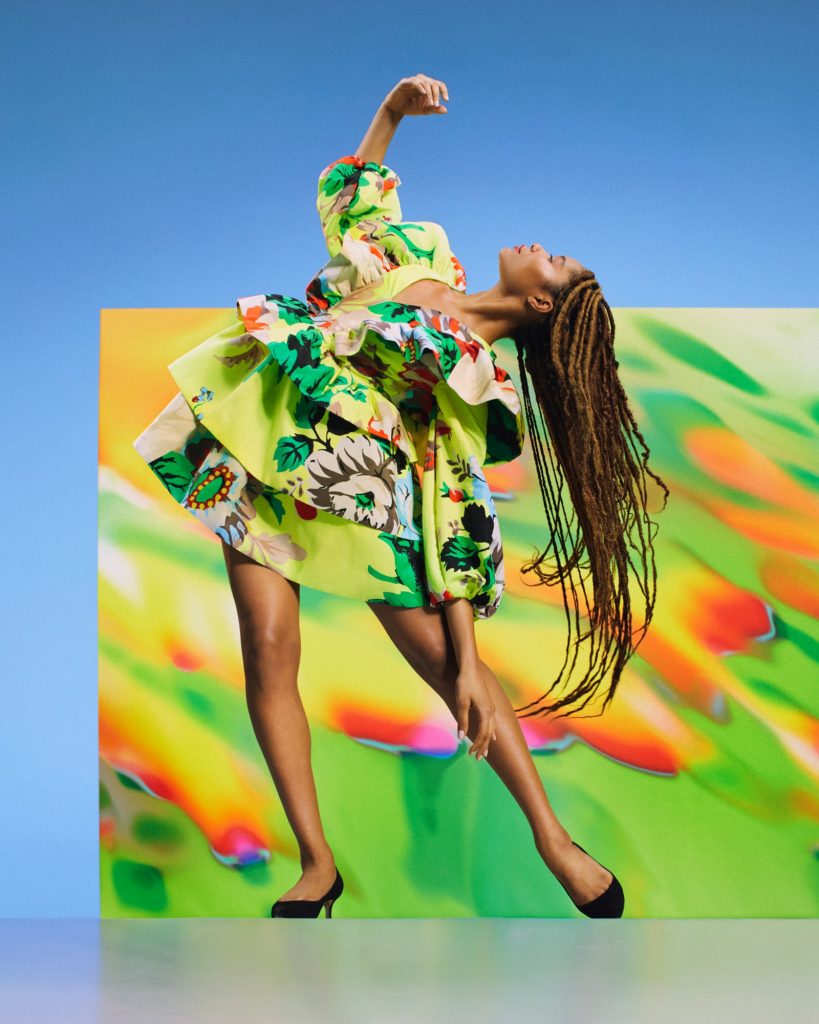 Christopher John Rogers shot to stardom when Vice President Kamala Harris wore his coat and dress to her and Joe Biden’s inauguration on January 20, 2021. The young industry darling is known for his unparalleled eye for color, voluminous silhouettes, and sharp tailoring. In only a few seasons he has already earned a CFDA/Vogue Fashion Fund Award and a legion of fans, including Zendaya, Lizzo, Tracee Ellis Ross and Michelle Obama.

In an interview with Teen Vogue, Rogers was asked how his background influences his style. Rogers stated, “I’m African-American, and I grew up in Baton Rouge, Louisiana, which is basically a large small town. I was fortunate enough to have my parents put me in art classes pretty early on, at the suggestion of my grandmother, and I was always surrounded by people of various backgrounds. My best friends in elementary school were Korean, Jewish, South American, you name it. I’ve always known variety to be standard.” 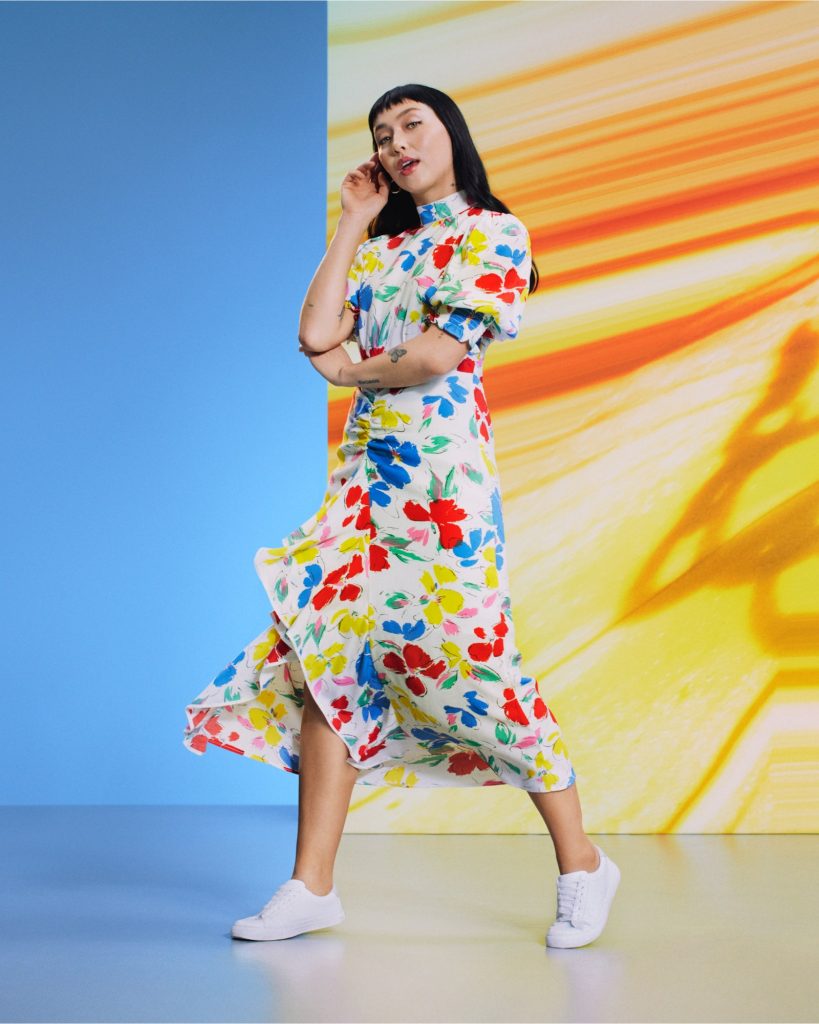 A look from Rixo’s collaboration with Target. (Photo Credit: Target)

UK-based Rixo, designed by Orlagh McCloskey and Henrietta Rix, bring a modern twist to vintage-inspired wrap dresses and patterns. The contemporary label evokes a Bohemian & free spirit, with easy-to-wear pieces in feminine shapes and high-quality materials.  The young design duo are known for their fusion of original hand-painted prints and timeless silhouettes that flatter all body types.

According to the brand’s profile, Henrietta & Orlagh met at University of Arts London, where on their first day enrolling as students Henrietta complimented Orlagh on her vintage handbag and the rest is history! Imminently discovering a mutual love for vintage, the pair have been best friends ever since and have also lived together through their first 5 years of Rixo – becoming more like sisters than friends. 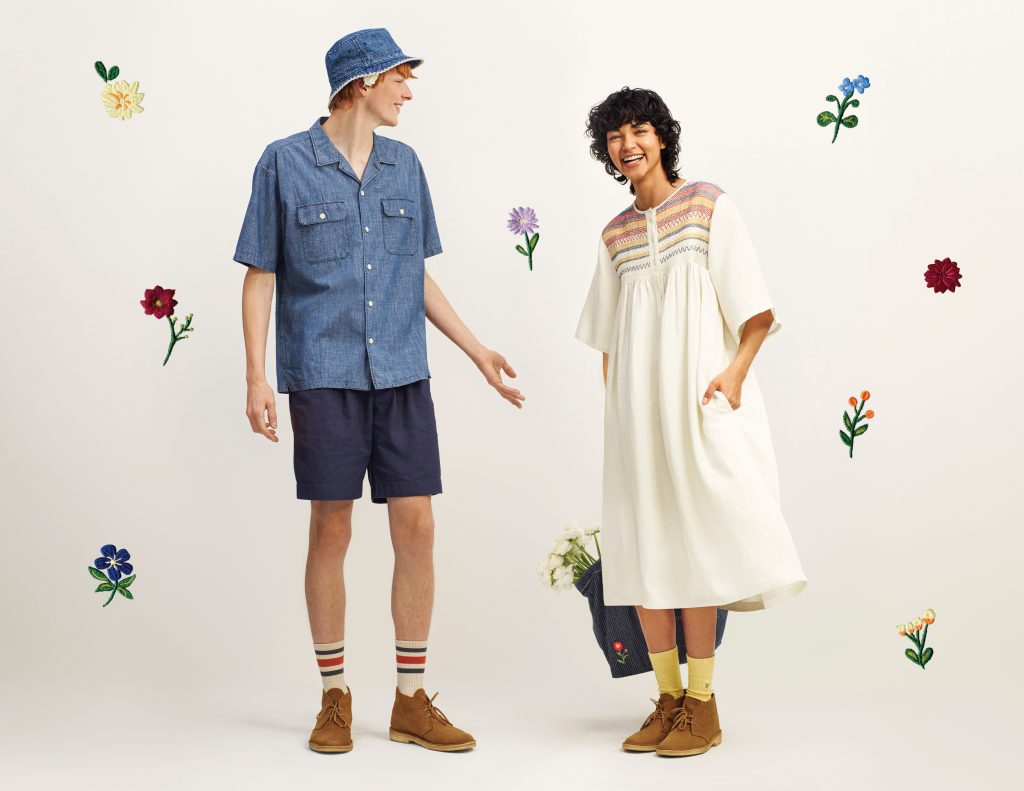 Jonathan Anderson has been keeping busy the last few months. In addition to designing for his eponymous British label JW Anderson and for Spanish fashion brand Loewe, he has created a capsule collection for the Japanese mega retailer Uniqlo.

For his latest JW Anderson x Uniqlo collab, Anderson focused his attention on designing items that he would like to wear when the world fully opens up again. “I wanted something that was a bit crisp and subtle,” he says in an interview with Refinery 29. “I always think you have to subtly get back into things.” To help shoppers transition out of the sweatpants they’ve been living in for more than a year and into the forthcoming season, he also “wanted [to create] something that felt timeless.”

For the spring capsule he created boxy T-shirts hemmed with chain stitches; oversized, linen polo shirts; and baseball caps made of vintage-looking denim and detailed with embroidered daisies. To fully round out spring’s lineup of essentials, he also included chambray dresses, smocked midi skirts, and rigid denim in light blue and oatmeal.

Anderson says that he’s become “very obsessed with handcraft.” Craftcore-esque chain stitches and embroidery, therefore, became mainstays throughout the collection. “I love the subtlety of detail,” he says. “It doesn’t have to be so loud in the very beginning.”

So tell us, which fashion collaborations would you like to see?