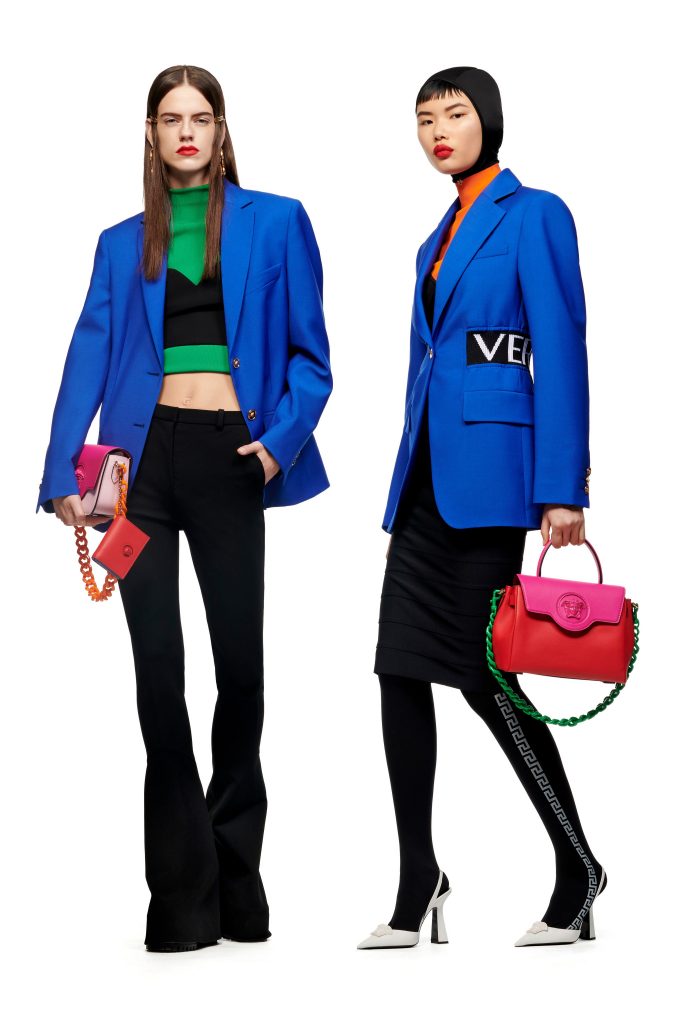 As we begin 2021, many of us are looking forward with hope to a vaccine that will help get us back to our pre-Covid lives. It can’t come a minute too soon. But what started out as a year of hope, took a discouraging turn here in the U.S. when only 6 days into 2021, we witnessed an insurrection in a failed attempt to bring down our government. As we write this, we still can’t believe it! It was a very sad day for our democracy. 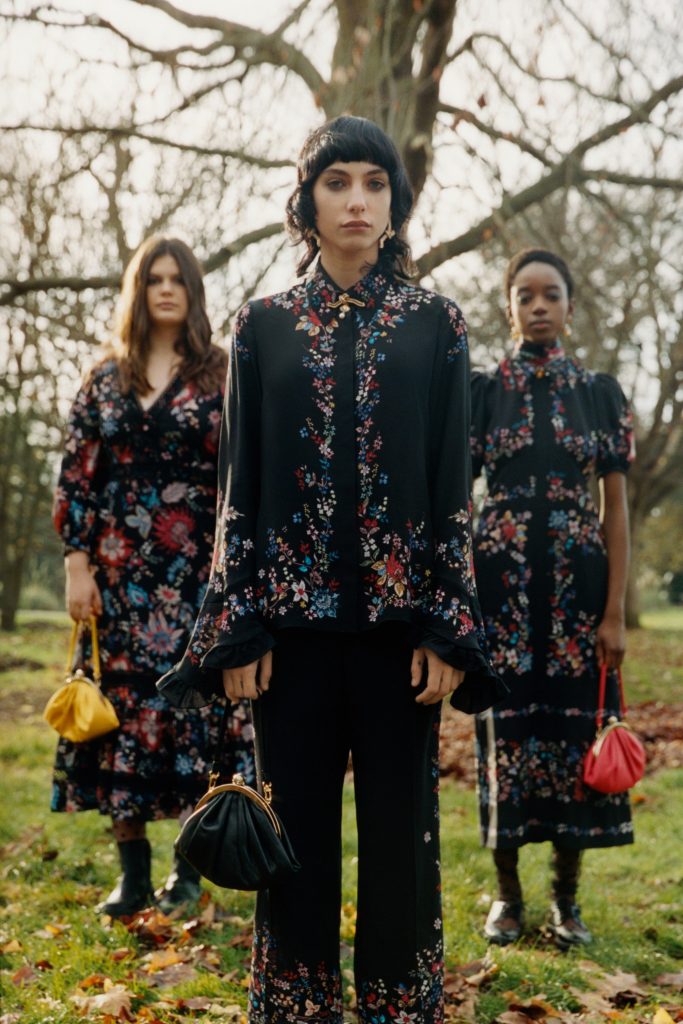 So, who doesn’t need a little fashion in their life right about now? Thank goodness for Pre-Fall. Fashion designers are celebrating the new year by promoting a return to ‘dressing up.’ They want us to ditch our sweats and leisurewear and put some fashion effort into our lives. Sounds good to me! And once again, due to Covid restrictions, these designers came up with creative ways to present their collections.

Leave it to Gucci’s creative director, Alessandro Michele, to present his Pre-Fall 2021 collection in a manner that is just as eclectic and creative as his clothes. Michele collaborated with American filmmaker Gus Van Sant, and the two creative geniuses came up with the project known as “GucciFest.” A digital project of 90 minutes shot throughout Rome over a 20-day period. The outcome, a seven-episode miniseries of visual delight.

The miniseries features plenty of familiar faces. In episode three, Ouverture of Something That Never Ended, the film starred Harry Styles. Styles, is not only known his music but also for his gender-fluid approach to fashion. The pop star made a cameo wearing a pink Gucci tee tucked into eco denim washed shorts. “When it comes to making art it’s about finding the thing you’ve always wanted to see that has never been made,” Styles says in the film while talking on a phone call. “It’s always an uncomfortable moment, I think, when you find the thing. You don’t know if you love it or hate it because you don’t really know what it is yet. But I think that’s the most exciting place to work in.”

The fashionable miniseries also includes stars such as Florence Welch (of the band, Florence and the Machine) in a vintage shop setting, as well as Billie Eilish (needs no explanation) walking her pet robot dog. The star of the miniseries, Italian actress Silvia Calderoni, is filmed throughout the empty ancient streets of Rome, all decked out in Gucci from head-to-toe.

As for the looks, they were Michele’s maximist aesthetic to the max. The collection had plenty of vibrant festive looks that ranged from a sequin pink and green zig-zag pattern pant paired with a purple sequin top and green bed-jacket; a purple pantsuit with gold embroidery; sheer lace lingerie inspired pieces; and plenty of beastly fur outerwear. For day, Michele featured a capsule of casual looks such as a blue athletic suit with the Gucci stripe running down the side; logo athletic t-shirts; flared denim pants; and plenty of denim shorts. The creative director also showed plenty of his vintage, ‘70s inspired looks with floral dresses; bow blouses; and geometric print coats.

Kudos to Michele for presenting his collection in such a creative, attention grabbing way.

As the old saying goes, “The show must go on!” And so Chanel filmed it’s pre-fall 2021 show at the Château de Chenonceau with a cast and crew of 300 and precisely one VIP guest: Kristen Stewart.

The Château de Chenonceau, is one of the jewels of France’s Loire Valley. The castle belonged to Catherine de’ Medici, the Italian-born, former queen of France, and throughout the grand estate you can find interlocking Cs, which were the Queen’s initials, but today, they look incredibly similar to the Chanel logo. The grand estate is also known as the Ladies’ Château, according to WWD, “Chenonceau has a history marked by a succession of powerful women, of which the Renaissance rulers, in particular, inspired the label’s founder, Gabrielle ‘Coco’ Chanel. That the French fashion house chose to stage its Métiers d’Art collection there is therefore something of a full-circle moment.”

The iconic house had hoped to invite approximately 200 guests to creative director Virginie Viard’s first fashion show outside of Paris, but due to a second lockdown in France, the brand was forced to revise its plans. So aside from the cast and crew, the show had only one guest, Kristen Stuart who will be featured in ads for the collection photographed by Juergen Teller.

As for Viard’s pre-fall collection for Chanel, she was inspired by many aspects of the 16th century castle. Lining the infamous chateau are beautiful gardens created by King Henry II’s mistress, Diane de Poitiers. Viard channeled the parterre designs of the garden and the delicate flowers as she reinterpreted the feminine motifs into rich embroideries. It was “a sophisticated take on a “Disney” Viard stated in an interview with WWD.

The creative director was also mesmerized by the chateau’s black and white checkerboard floors, which was a reoccurring print theme throughout the collection as Viard applied the motif to chessboard sequin miniskirts to fringe tweed maxi skirts. Overall, the collection had a Goth princess aesthetic with dramatic capes, poet blouses, and plenty of transparent black dresses.

Viard also played tribute to Coco Chanel and Karl Lagerfeld with her own playful interpretation of trompe l’oeil looks, with reimagines of the castle in Lego-like sequin bricks, used as cummerbund sashes that cinch the waists of full satin ball skirts and strapless gowns. The chateau’s tapestries also inspired Viard’s intarsia knit and embroidered sweaters. While the collection at times veered towards costume, there were still plenty of signature tweed jackets that the Chanel customers crave.

Living in lockdown has been hard on all of us. Even the most fashionable influencers have photographed themselves in sweats and furry slippers. The spring collections were even filled with leisure-inspired looks that we all craved while many of us work from home, but Maria Grazia Chiuri, the creative director of Christian Dior, has had enough. For her pre-fall collection, Chiuri created her most animated collection to date. In an interview with Vogue Runway, the creative director states, “Now, we desire something that gives us energy. Something completely different.”

“After this year—so intense, so depressing—I would like to come back to the fashion that started my career: the playfulness that attracted me and my generation to fashion, and transform the Dior codes through this attitude,” she said. For Chiuri, a child of the 1970s, those roads had to lead to Elio Fiorucci. “My generation was super influenced by pop culture,” Chiuri recalled in the Vogue Runway interview. “At Fiorucci we saw another way of fashion. It was probably the moment that fashion was born in Italy, because we left our traditional clothes to go to this toy store and discover clothes we’d never seen in our life: different materials, and clothes from around the world.”

Inspired by Pop Art, Chiuri created an uncharacteristically colorful collection that was lighthearted and fun. The cheeky collection was filled with unapologetically fun pieces: a leopard coat; a silver jumpsuit; mirrored sequined party dresses; logo transparent raincoats; bold check mini skirt suits; and a humorous T Rex print that was found on everything from dresses to tote bags. In her atelier, Chiuri said, “We decided that when this is all over, we’re each going to choose a different color dress and have a big party. That’s the dream: to dance together.” 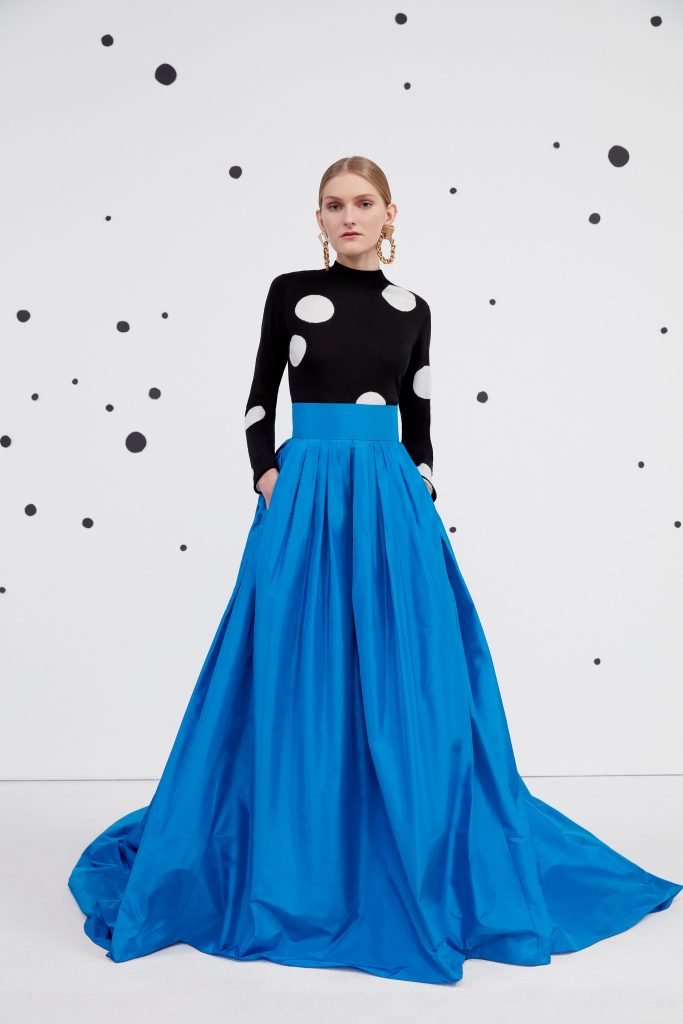 It was only two months ago that Vice President-elect Kamala Harris wore a white pantsuit from Carolina Herrera for her acceptance speech. Harris chose white as a tribute to the woman’s suffrage movement and her Carolina Herrera suit will be forever be synonymous with Harris’ ceiling-shattering moment.

For pre-fall, Carolina Herrera’s creative director, Wes Gordon, emphasized the more playful side of the brand’s aesthetic. Gordon hopes that by the time the collection hits stores (between May and June) the world will be on a clear path to vaccination.

Inspired by Mia Farrow, circa Rosemary’s Baby, there was a nod to the swinging sixties with black and white zebra prints, polka dot patterns. in an assortment of sizes and colors, as well as the houses signature bow motifs. The collection was joyful and energetic with looks that ran the gamut from brightly hued ballgown skirts to multi-colored dotted shirtdresses.

Gordon struck the perfect balance between youthful and sophistication. 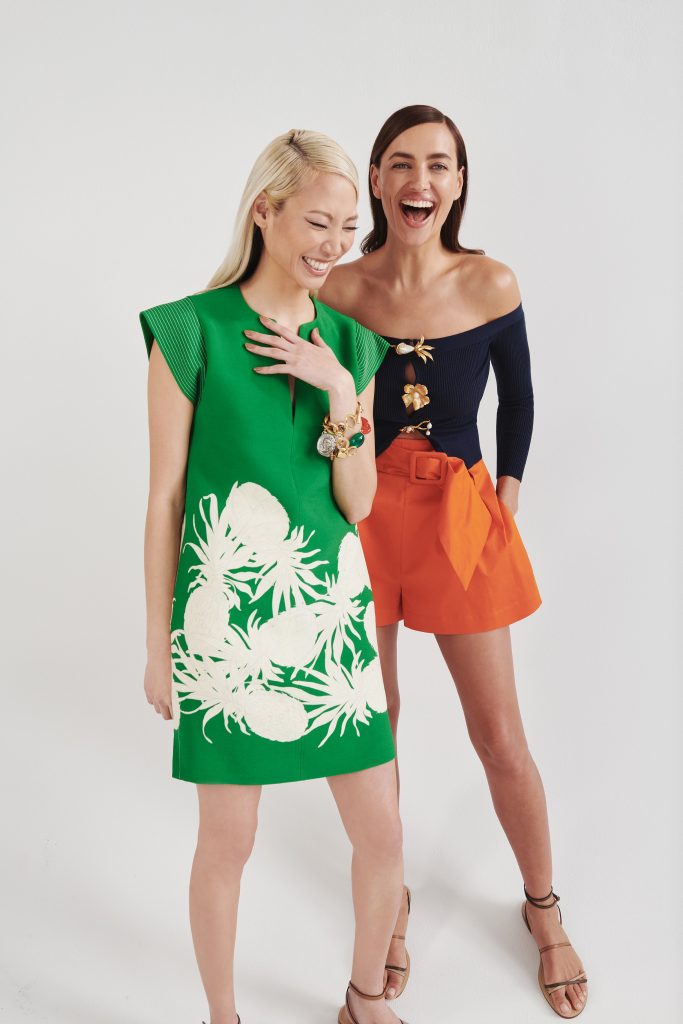 The design duo dug into the house’s archives and were inspired by a pineapple motif worn by Linda Evangelista in a 1992 Oscar collection; they were looking for something happy and light after this dark pandemic year we’re all living through. The pineapple pattern was found on several looks ranging from a block print on a simple green shift to a life-like color on a bandeau top with pouf sleeves. Other key looks included an array of brightly colored shorts, short day dresses, playful striped rompers, and a few strapless cocktail confections.

Garcia joked in an interview with Vogue Runway, “Piña coladas all day long.”

So tell us, how optimistic are you feeling in your fashion choices for 2021?